#1
Hi Guys - Here are some shots of my Phantom V1 - the idea was to build it with low cost methods - my inspiration was the YODA with a poly wing and the BAMF which I fly - it is not a bad build, but ended up with an AUW 100g over my target (sadly the wing weight was the major culprit as I used 100g Carbon) - the wing had a quick connect system which can be seen in the attached forum thread below (also to be refined).

I have decided to build a V2 taking what I have learned to refine my process - the fuse uses 3D printed moulds without any surface cleanup (this time I will tickle them a bit more) - I am happy to share all the files for the fuse and the wing and even do a group build.

#2
Here is the provisional fuse CAD - it is essentially the same as the V1 but this time I will cast the finished boom (formed on a pool cue) into the fuse moulds to get a seamless joint - last time I grafted the boom and fuse together which added more material at the joint and created alignment issues. 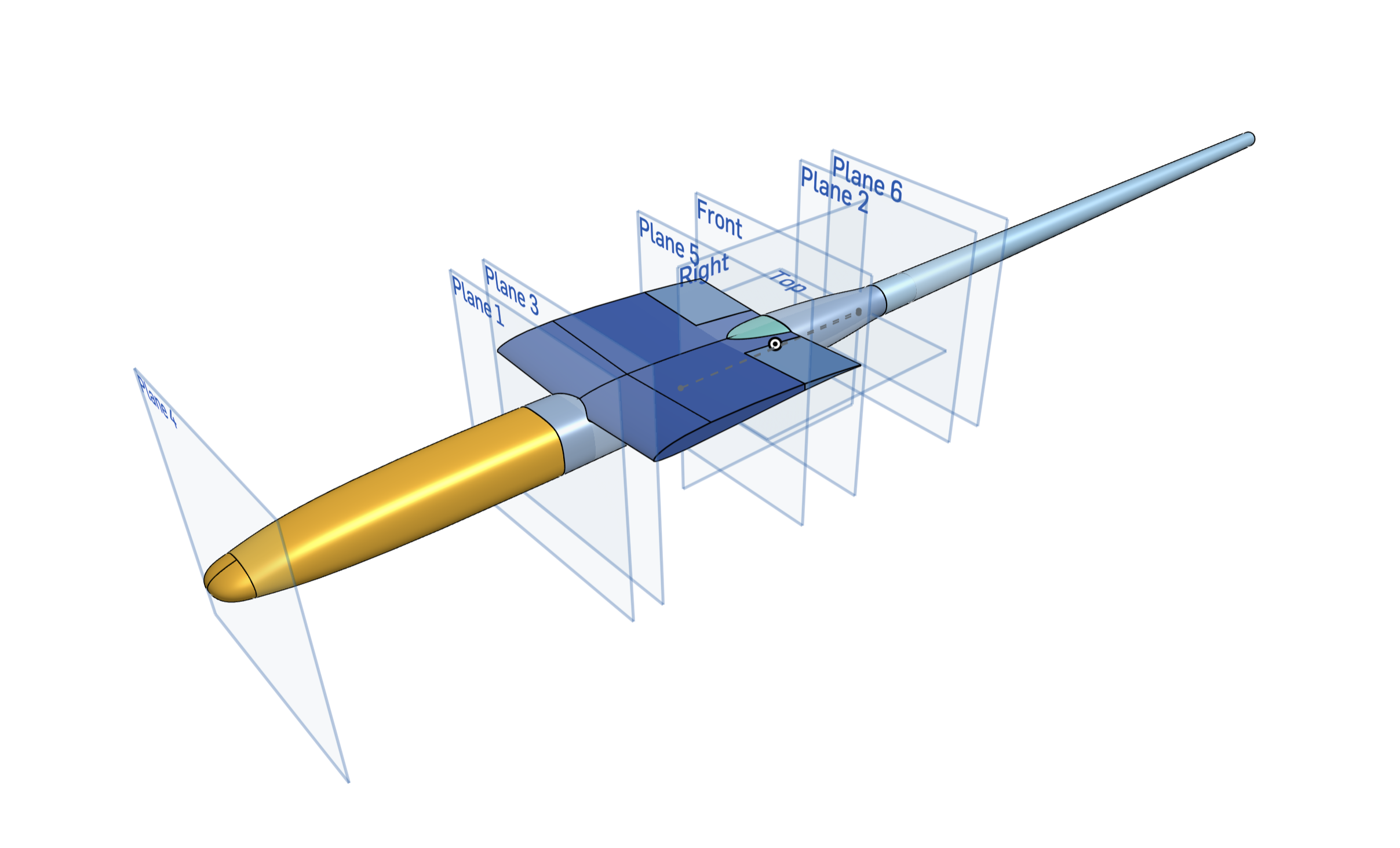 #3
Here is the hot wire wing blanks - the blanks are further shaped before adding the skins - I plan to tweak the CAD for the wing blanks a bit more for the V2 to thin the tip chord - the middle break is thicker to fit the aileron servo but the tip can be thinner - the planform of the wing is based on my BAMF. 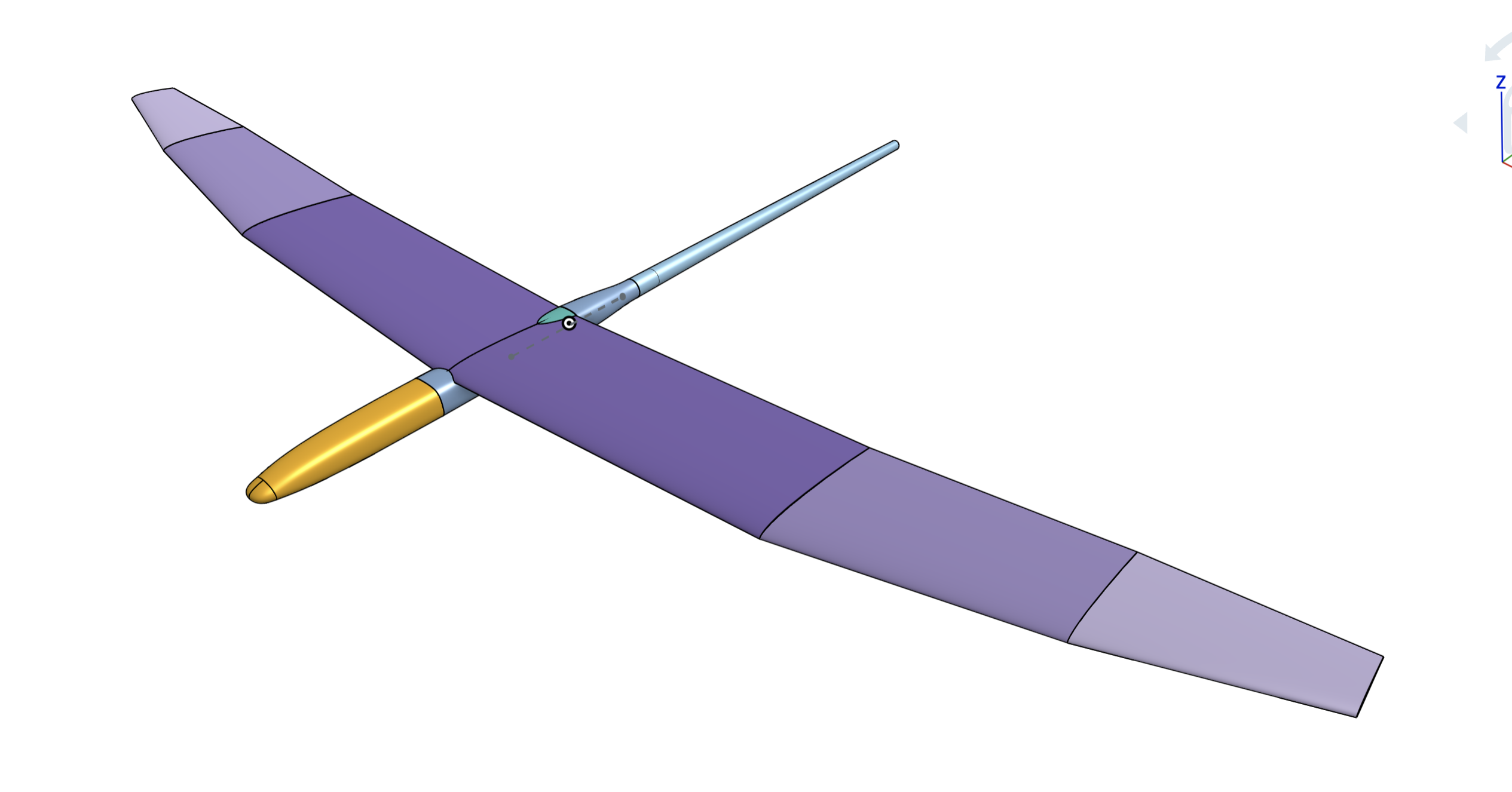 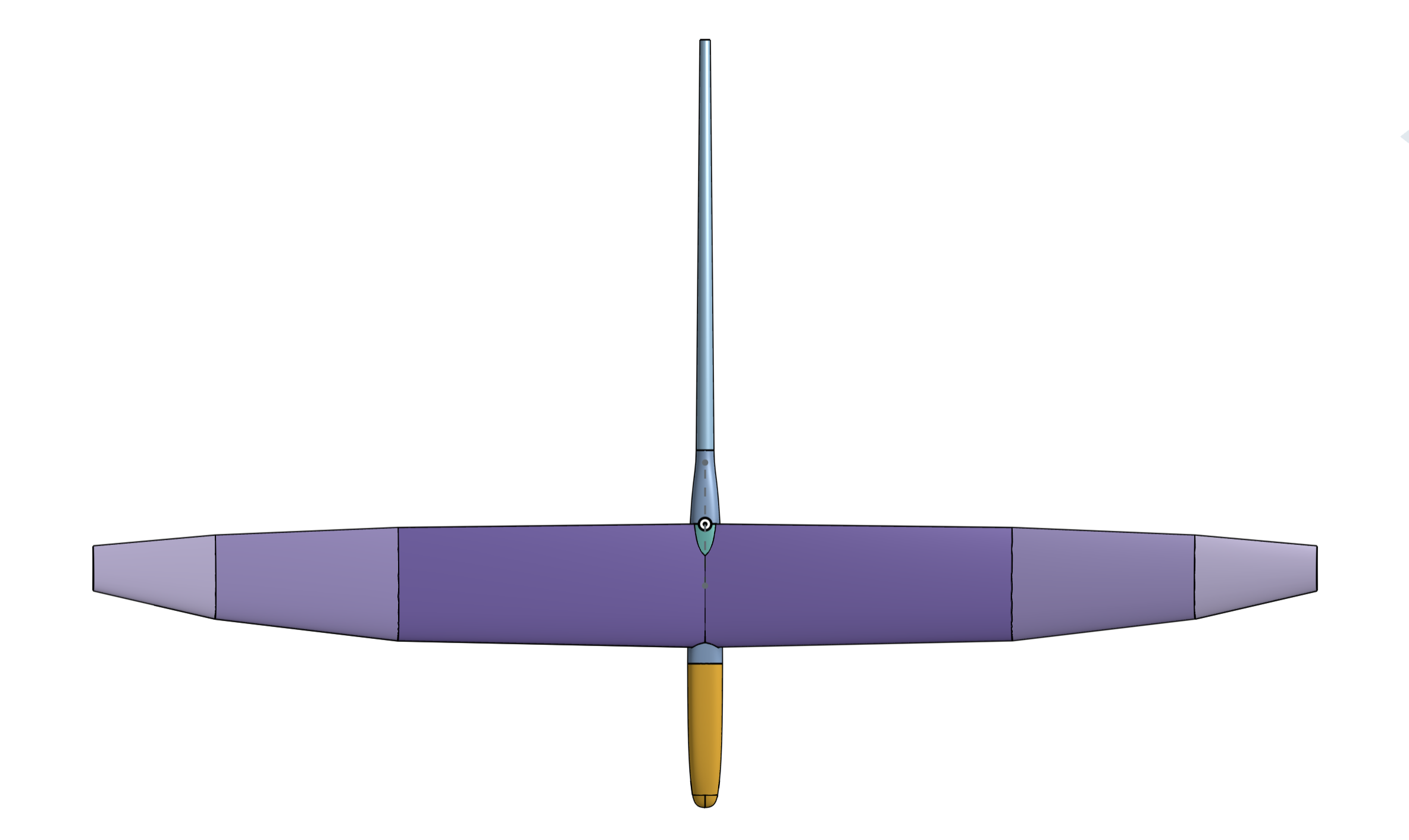 #4
Here are the moulds in development - the 3D printer is limited in height so I make the parts in sections - the bottom three moulds will all be glued together - the smaller middle section allows for the LE undercut of the wing saddle to come out of the moulds - there is also an extra alignment section to place the boom into the moulds. 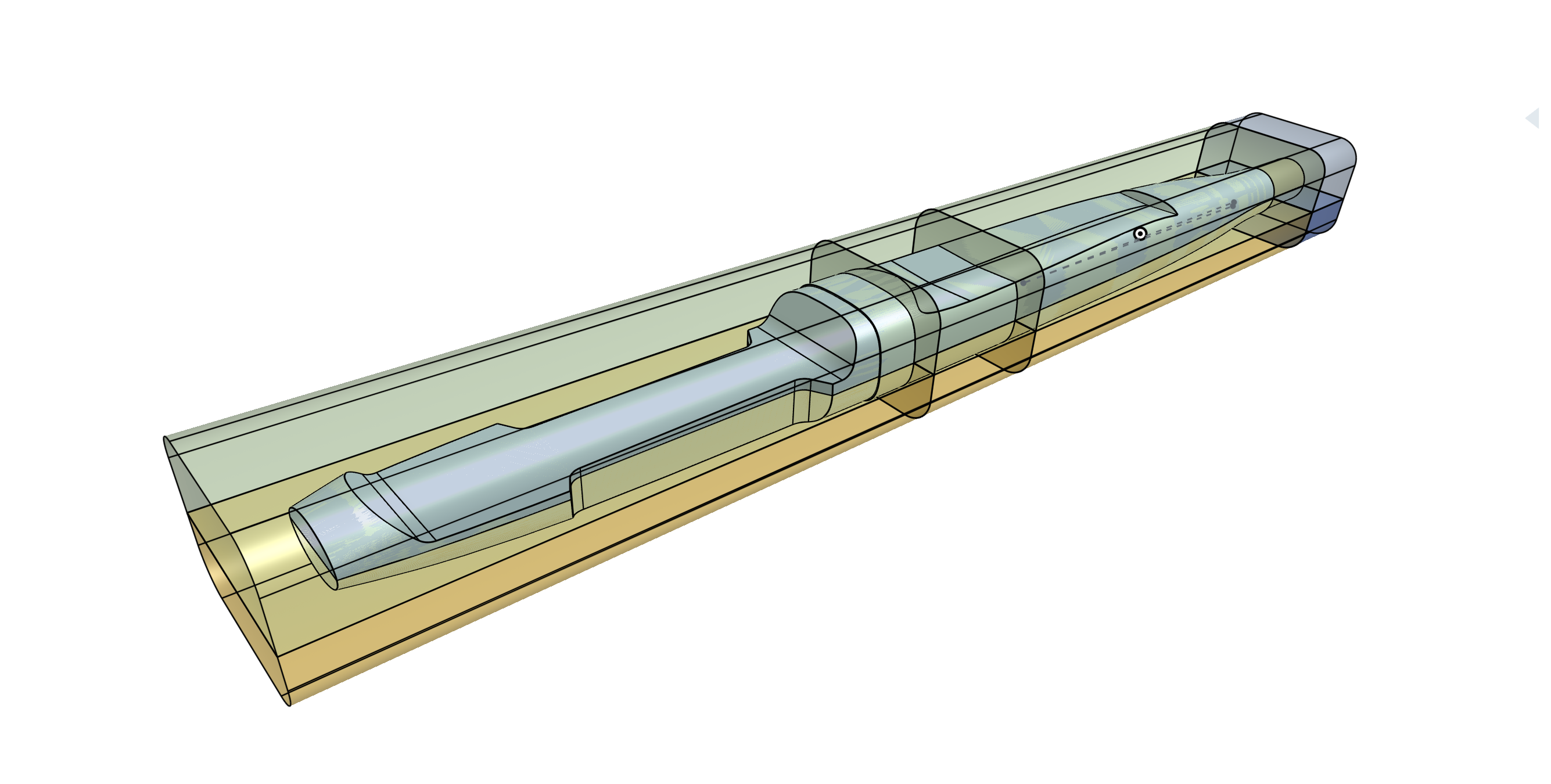 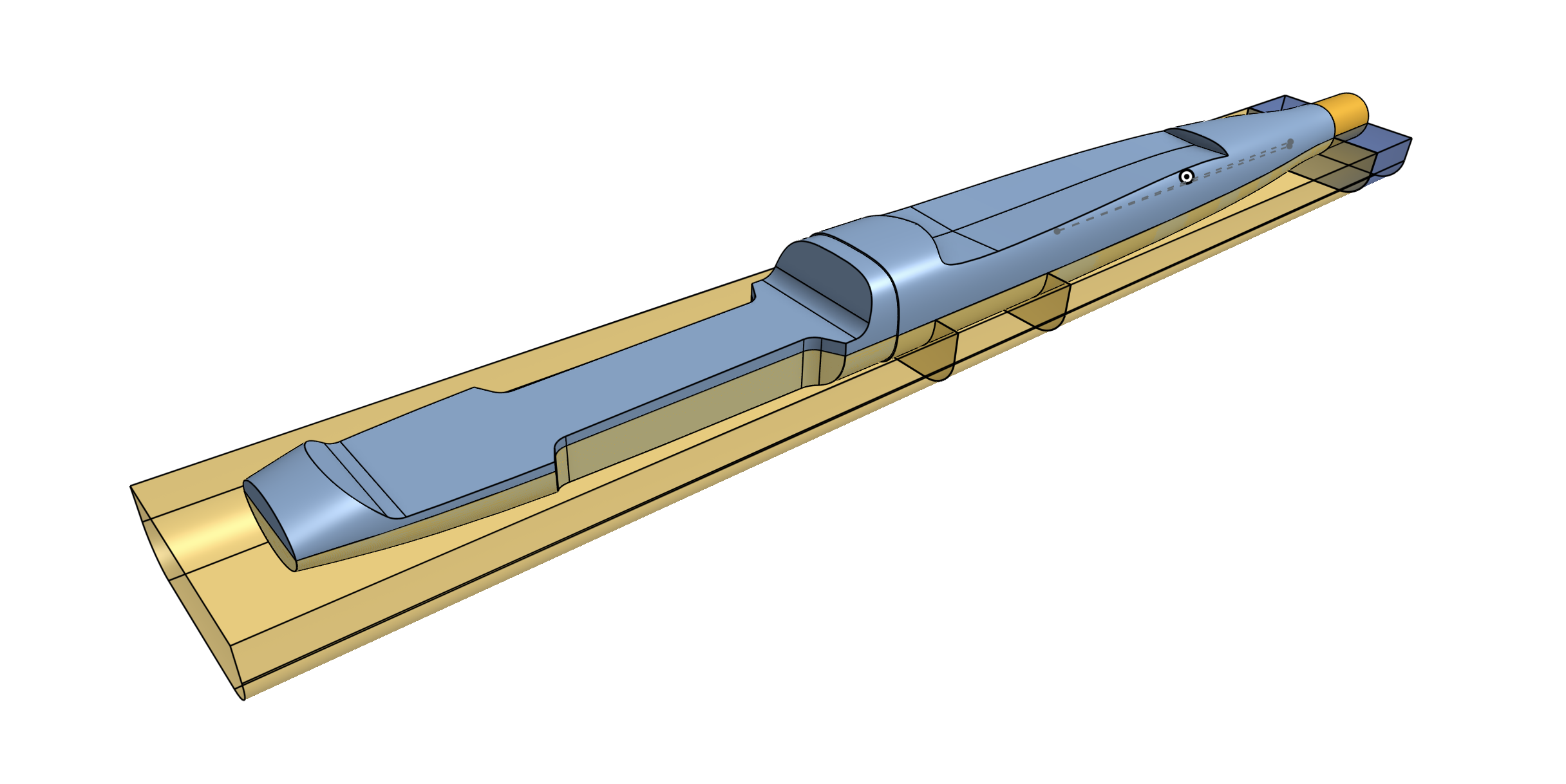 #5
Here are the wing blanks and the BAMF plan-form overlaid to compare.

#6
I have already made a tail boom - it is tapered 21x12 over 500mm - I also have an old BAMF boom of a similar length and by way of comparison the BAMF boom section weighs 15g and my boom weighs 16g - so this is a good start!

#7
Finally got around to this thread. Nicely done documenting this process as well as showing real examples of what you have done. I watched your last flying video and it amazes me how these things so gracefully slide thru the air. Like I said in the comments.. you get more flight time in one flight with zero wind then I get on powered flights so far.

#8
@PsyBorg - the DLGs are fun to fly as they glide on the sniff of an oily rag!

I started with the FB versions and migrated to a mouldie when a friend gave me his old one - the problem was the BAMF is a sports car and for a nube flier that's a recepie for disaster - I smashed it up pretty good and rebuilt it several times before I put out the call for a new fuse (luckily the wing has held in there - a testiment their robustness - 1.5m @120g) - the second fuse was also a well used bit of kit for $50 and I snapped the nose off at launch, so more rebuilding and the BAMFzilla was born.

The BAMFzilla is still flying and was in the last video.

My Phanton V1 with the poly wing has only had a test flight so far - it is a bit of a beast in the weight department so will only work in a breeze or on the slope - hense the V2 is underway!

With the 3D printed moulds and fiberglass instead of carbon these are cheap to build (just takes a bit of time)! - l will use carbon, but I am also considering some fibreglass where it makes sense.
Last edited: Oct 7, 2021

#9
I had a close look at the foils I am using - my foils were originally a take on the synergyII foils and compared to my V1 build the V2 tip transition is now thinner.

In the attached image the root is on the top and the tip is the bottom one - in the background (in red) are GT's Synergy foils and mine are overlaid with the black outlines - my Root is quite similar but is a tad thinner than the Synergy and my tip is similar in thickness, but holds its thickness for a bit longer in comparison.

I have also attached an image of my V1 chord that I cut as a novice - I use 3D printed templates with tape on the surface to act as a heat shield - they are simple to make and work quite well. 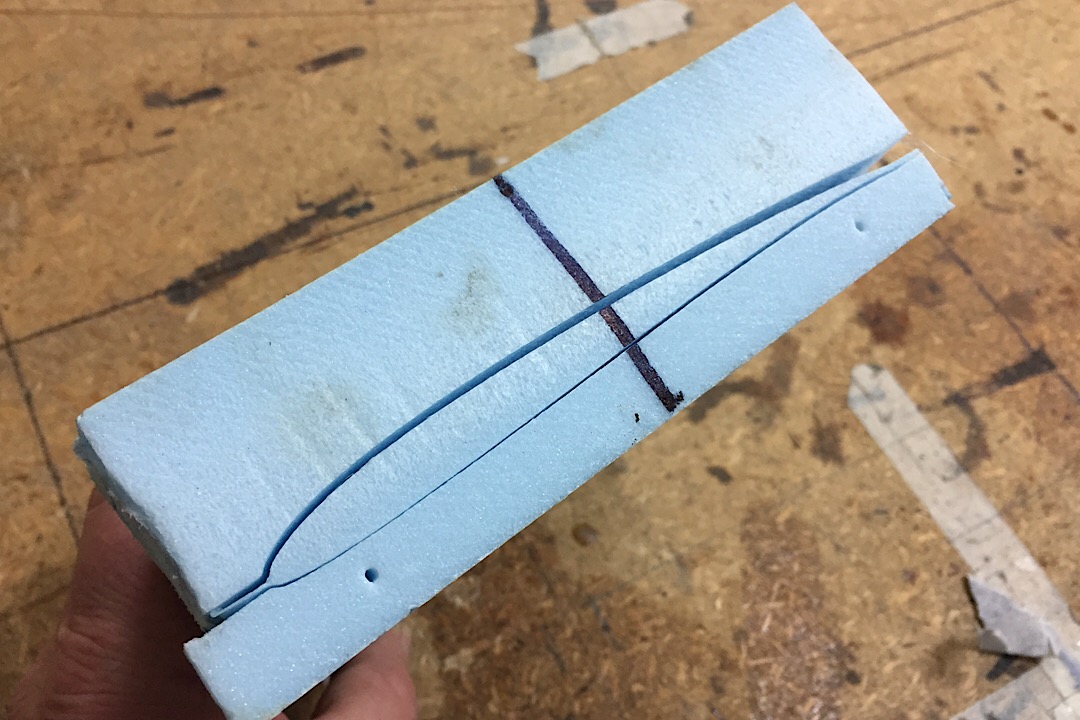 #10
From reading other threads I can use 50g FG (1.6oz) for the wing, pultruded spar caps, FG facings on the flaps and ailerons, and some disser to stiffen things up and ditch my CF for now (something to consider)!

In my V1 wing I put a full height spar though the foil - I am now wondering if that is overkill?

#11
My next order of business will be to cut some wing foams and print some fuse moulds - that gives me some time to contemplate some of the finer details in the build.

If the foam cutting goes we'll I will cut two wing sets.

#12
My friend said why not build a wire cutter machine.

I made a quick CAD of a linkage system that can handle the requirements for the worst case arc which is the tip - I am 3D printing some tube bung ends that can have bearings at all the pivot joints - and I have some large diameter (29mm) CF tubes that I will use for the arms. 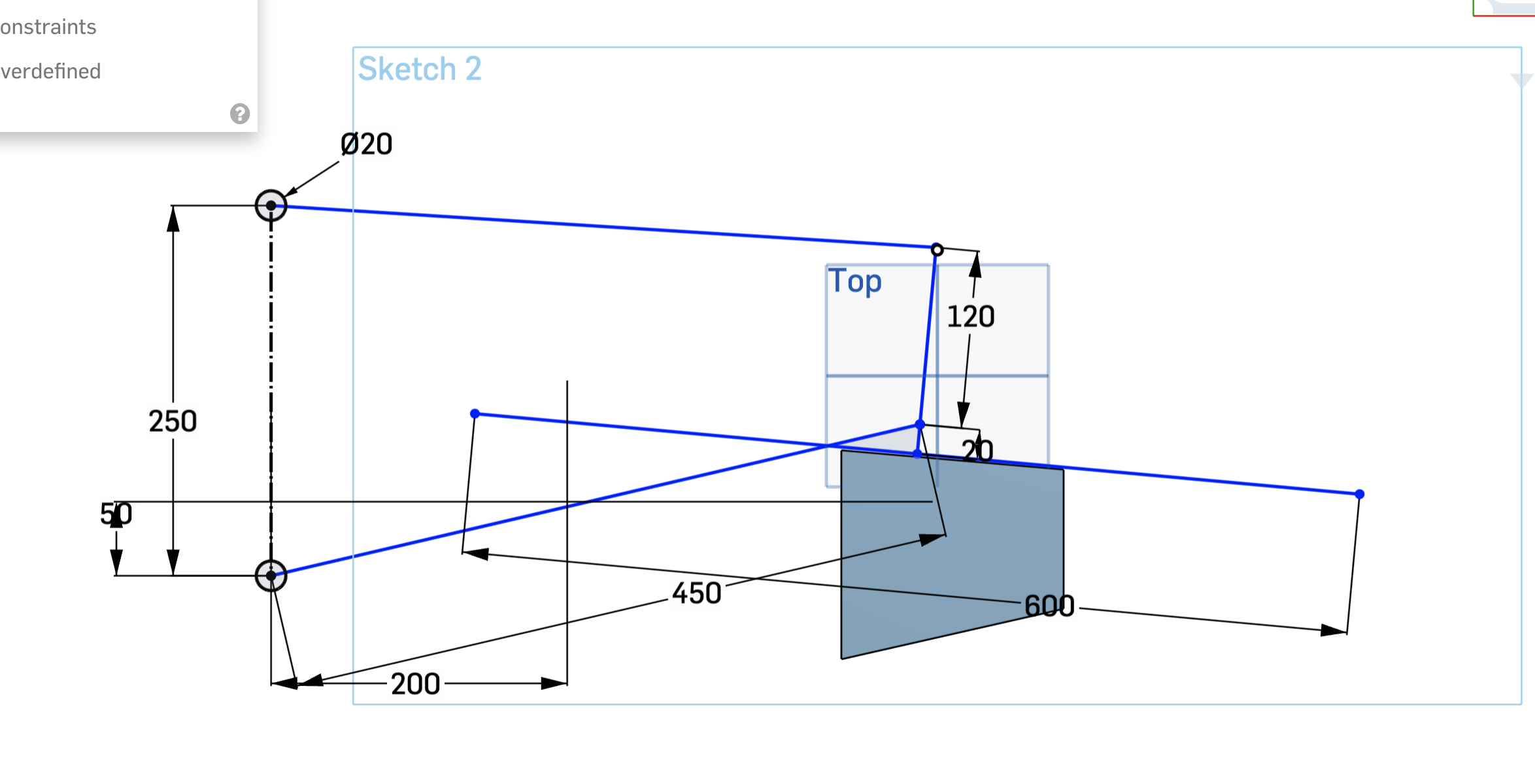 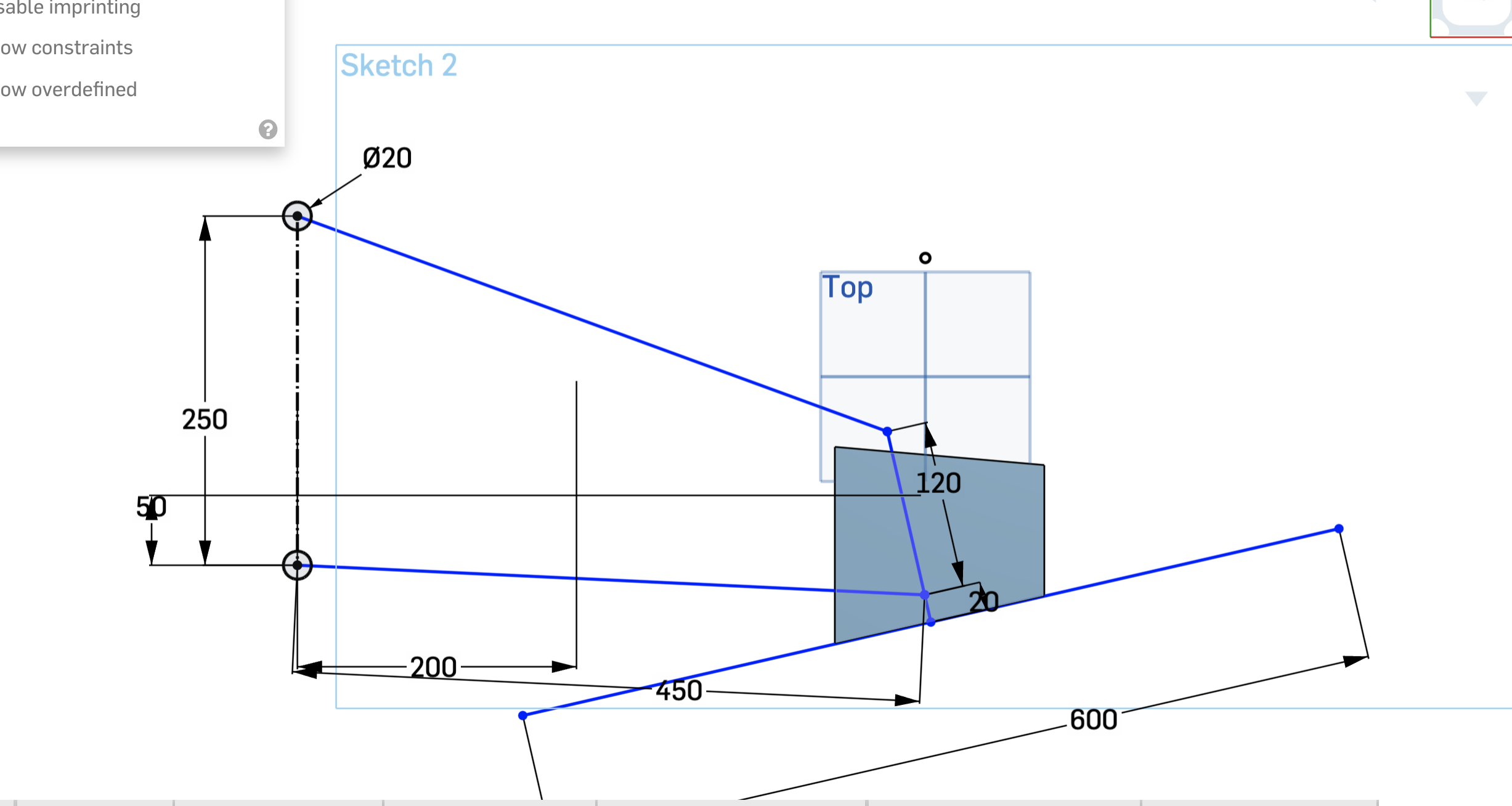 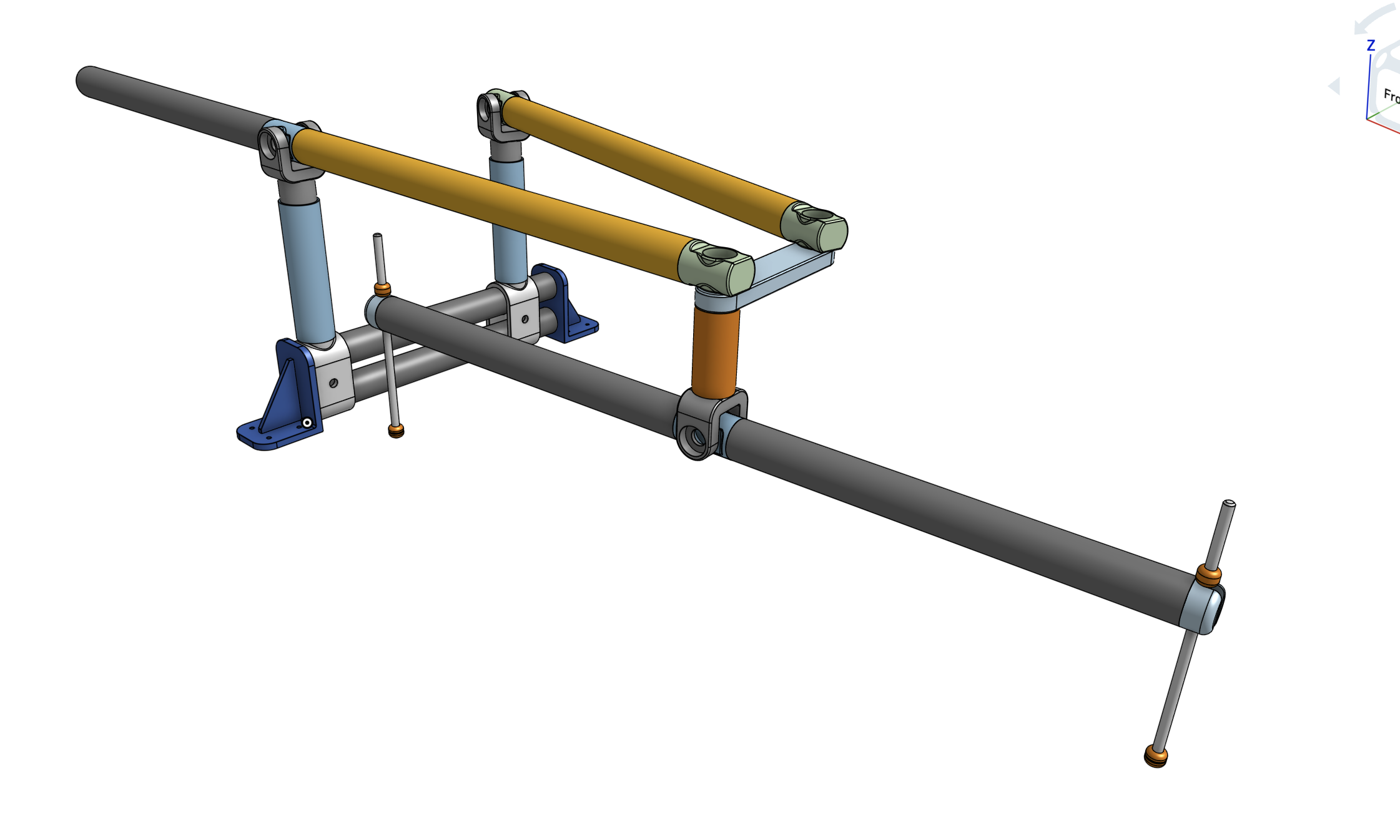 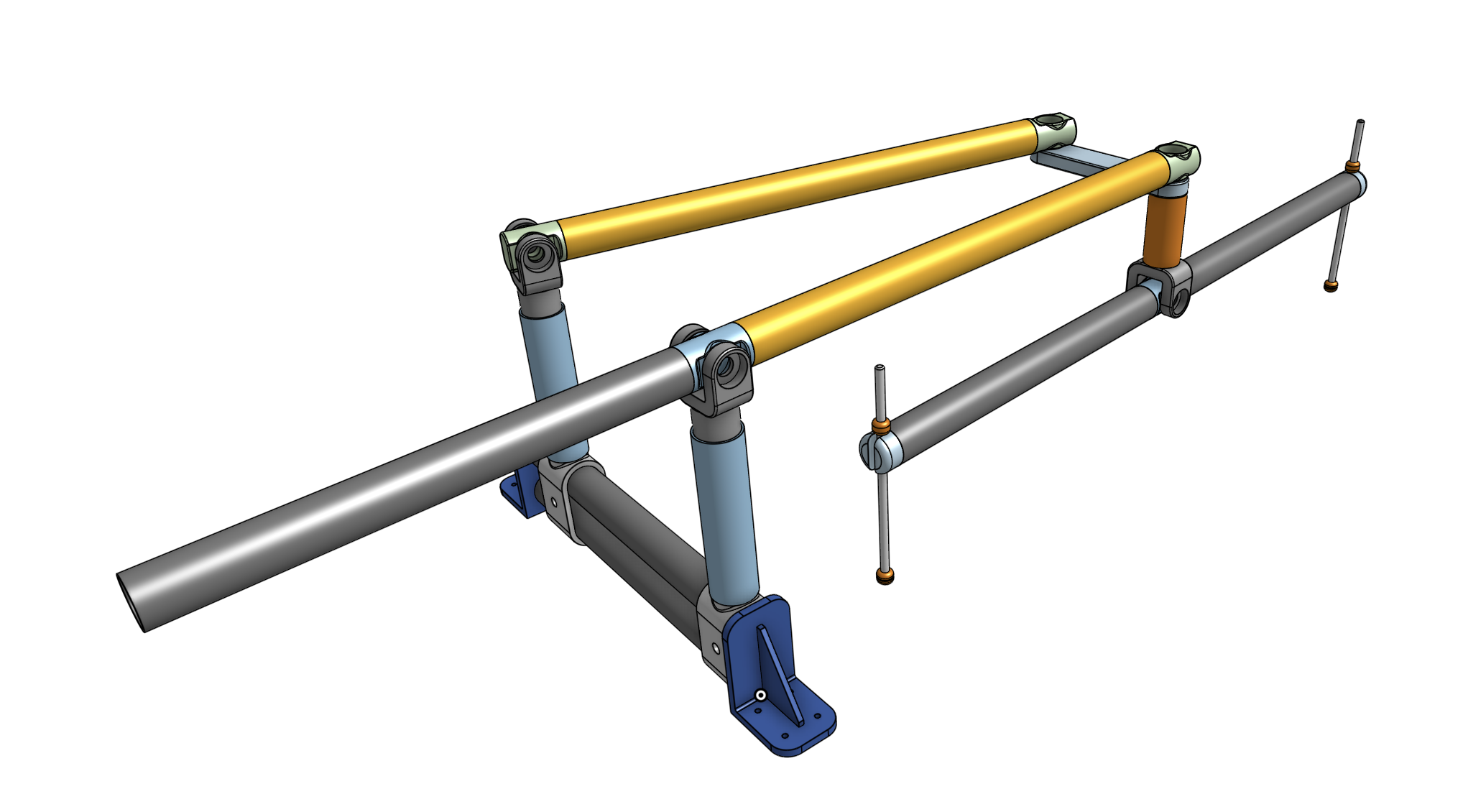 #14
Some progress with my wire cutting rig - a few more pieces are on the 3D printer but it is looking good so far - hopefully it will work too! 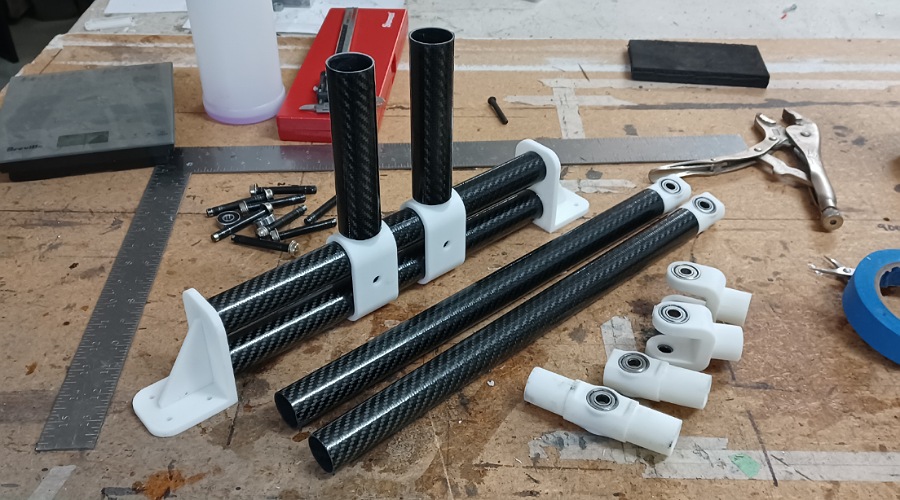 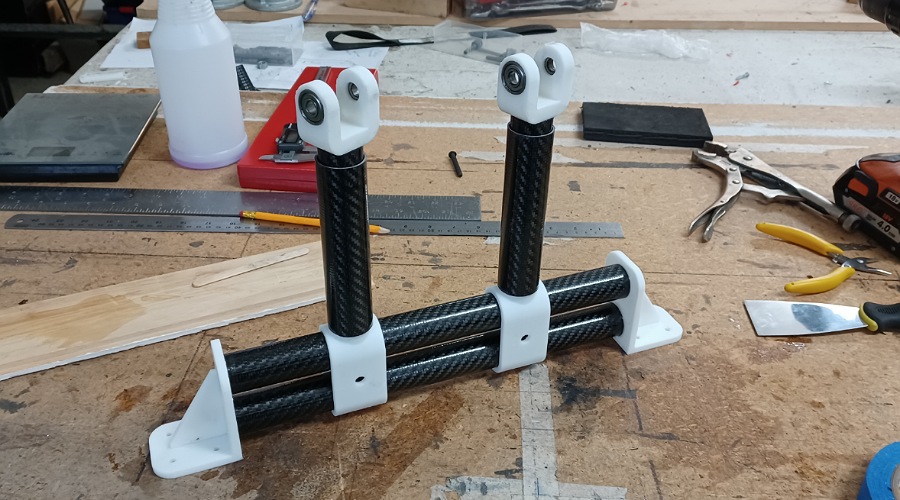 #15
bracesport said:
Some progress with my wire cutting rig - a few more pieces are on the 3D printer but it is looking good so far - hopefully it will work too!

#16
Ha - just lucky to have these CF tubes in the parts bin at work - the printer is doing most of the work!