#1
Unlike the German projects of the first jet aircraft, little is known about their Soviet counterparts. These are really the first projects of Soviet jet aircraft, and not those that are considered the first, like the MiG or Yak´s.
At start, it was typical a propdriven plane changed to jet engine by a big underbelly...
One of the first Soviet designers who worked on jet aircraft in the USSR was M.I. Gudkov.
The failure with promising developments of the Gu- jetfighter ideas , which were actually buried by the Russian Aviator Comitee leadership, and ineffective jetengines, did not break Gudkov’s will to design new aircrafts.

Pretty "fat-bellyed".... He was also codesigner of different other planes, with or without jets. As this :

BUT, in my search of next build, i found i wanted something to use a EDF in, and i did searched among others, on different more modern planes...
till suddenly found a short part in a video (few seconds) on early russian jets, and after more research did found some 3d pictures /illustrations made of the plane... a WARBIRD , close similar to typical prop-driven planes, with just a minor fatter belly, with jet engine as idea by constructor Gudkov. He was also codesigner son some planes as the Russian Lagg3 (Lavochkin-Gorbunov-Gudkov )

who had many similaritys by the Western other propeller driven planes of that time.

He came up with this idea for a superb jetplane.... 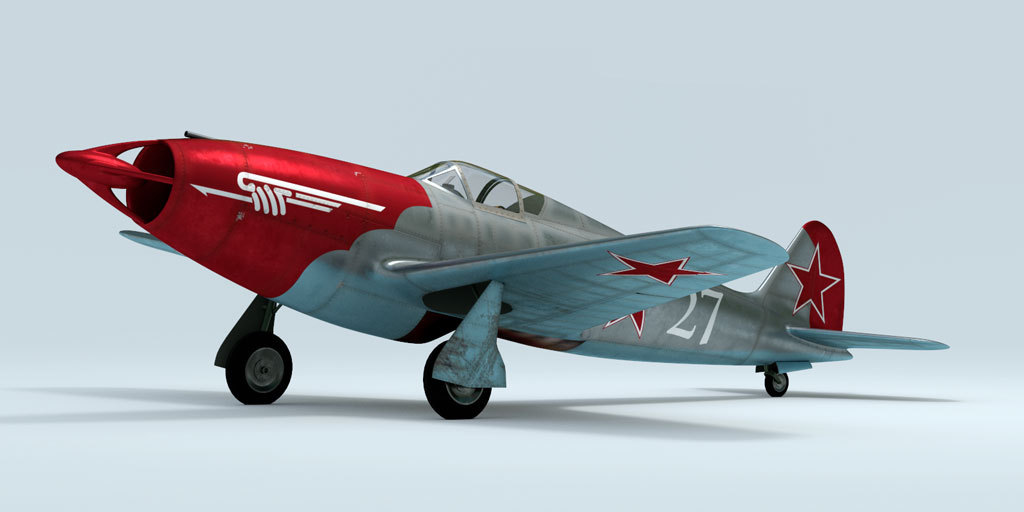 FANTASTIC deign!! This is gonna be my next build!! By different info, also by Lagg3 and Mig, i canmaake some similar plane, and use a EFD laying around!!
Last edited: May 30, 2020

#2
started slowly... here is the frontpart. minor adjustment in finish yet to do. 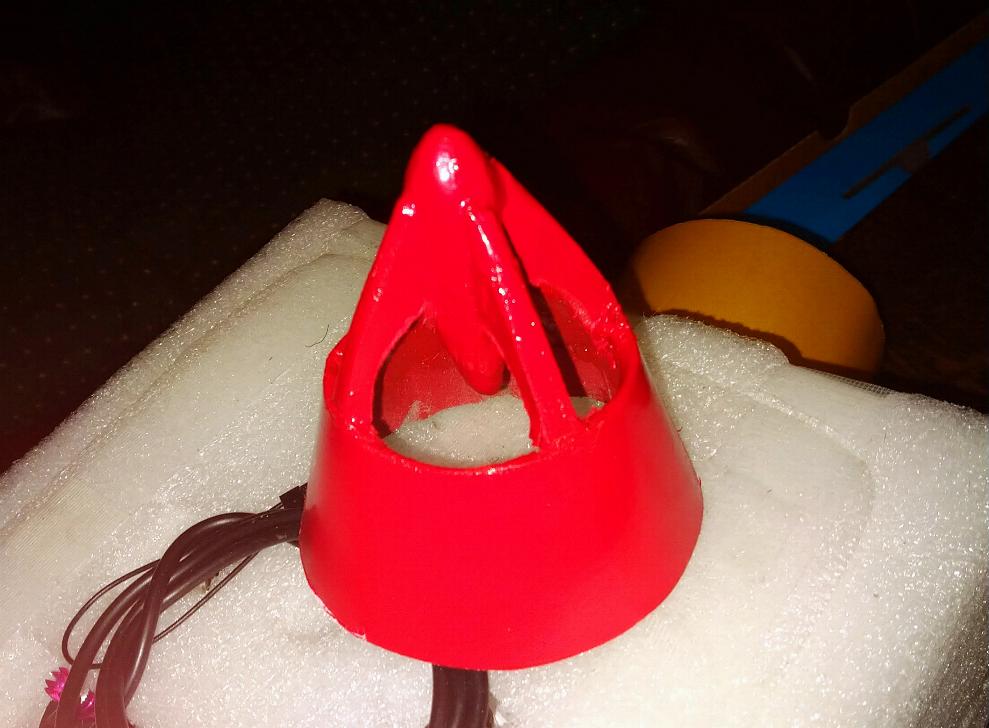 #4
JClaude said:
Hum! Interesting, and unusual.
Click to expand...
Quite correct, yes. !
Done more on the internal of fuselage. 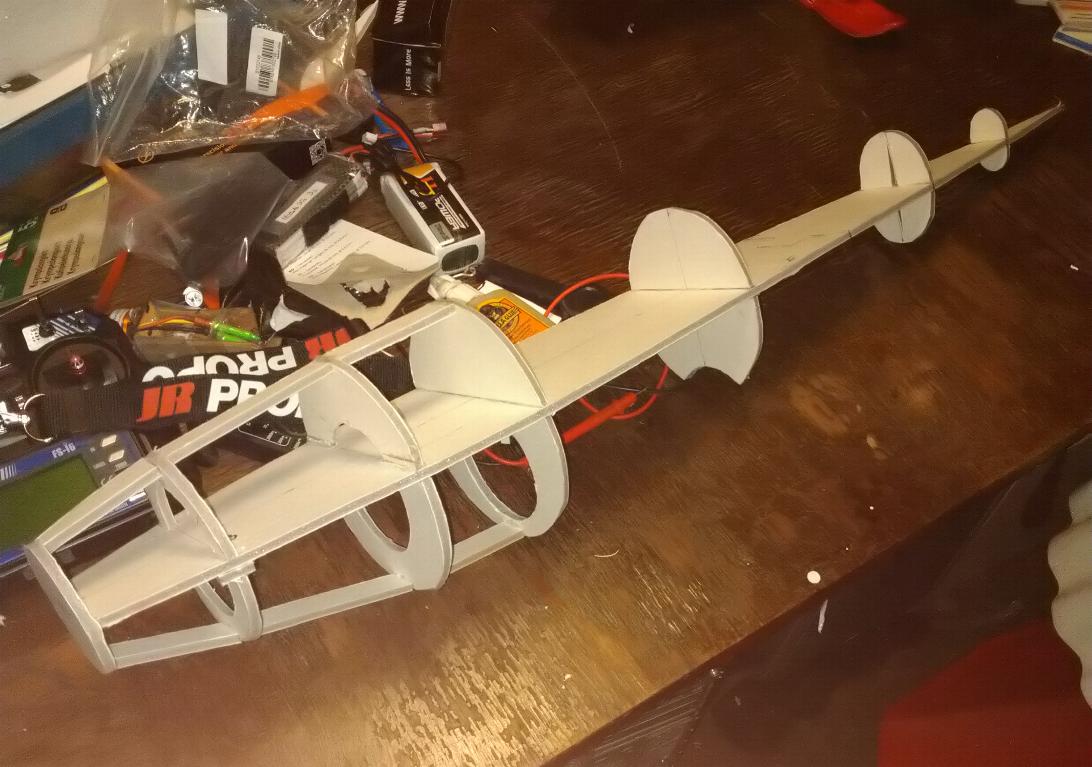 #5
close to finished making the skins in paper, to trace to foamboard. Some creative thinking to dvelope best possible skin around the EDF exhaust, but did get it well . 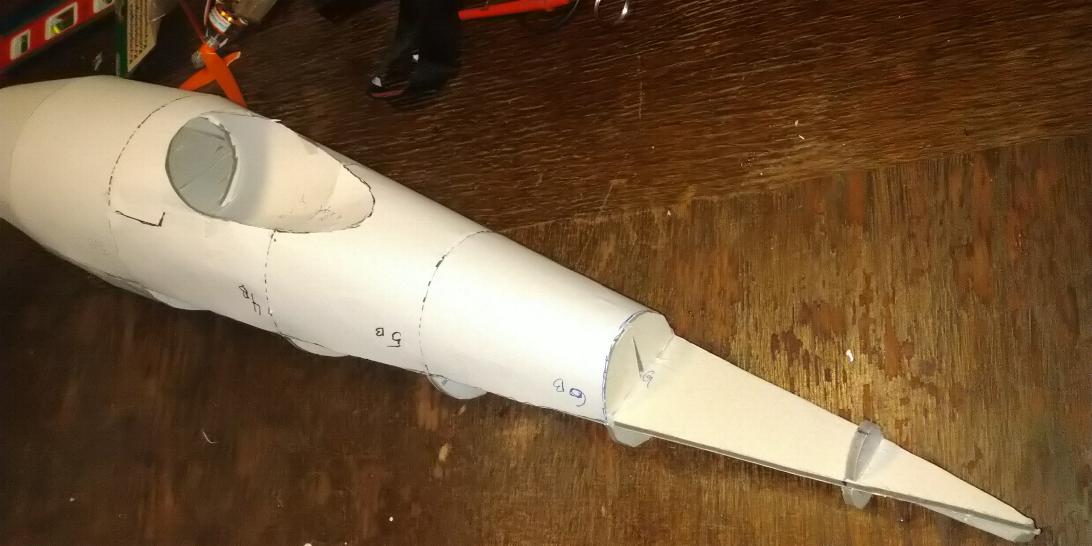 #6
This is a really cool project!! I look forward to seeing it take shape

#7
if want a typical warbird, and jet... was the best project i found

#8
it begins coming along.. some of the skins are in place, EDF is mounted, thrust tube & hatch is ok.. 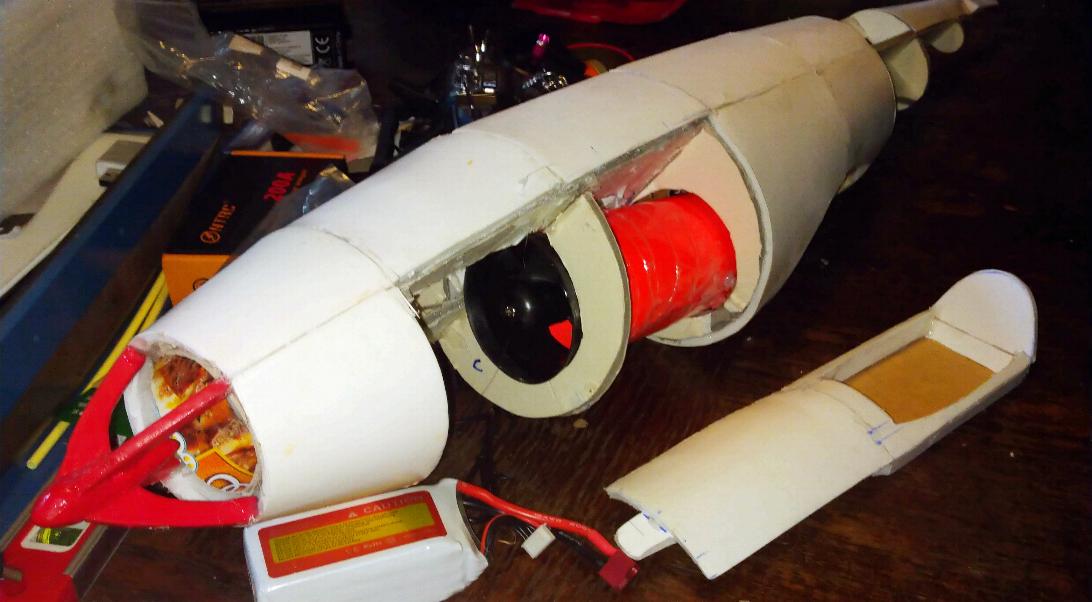 #11
Mutley said:
За Сталина!
Click to expand...
i needed translate it ,
..although, after my info the project was stopped from him, and the Aviation ministry Ha,ha 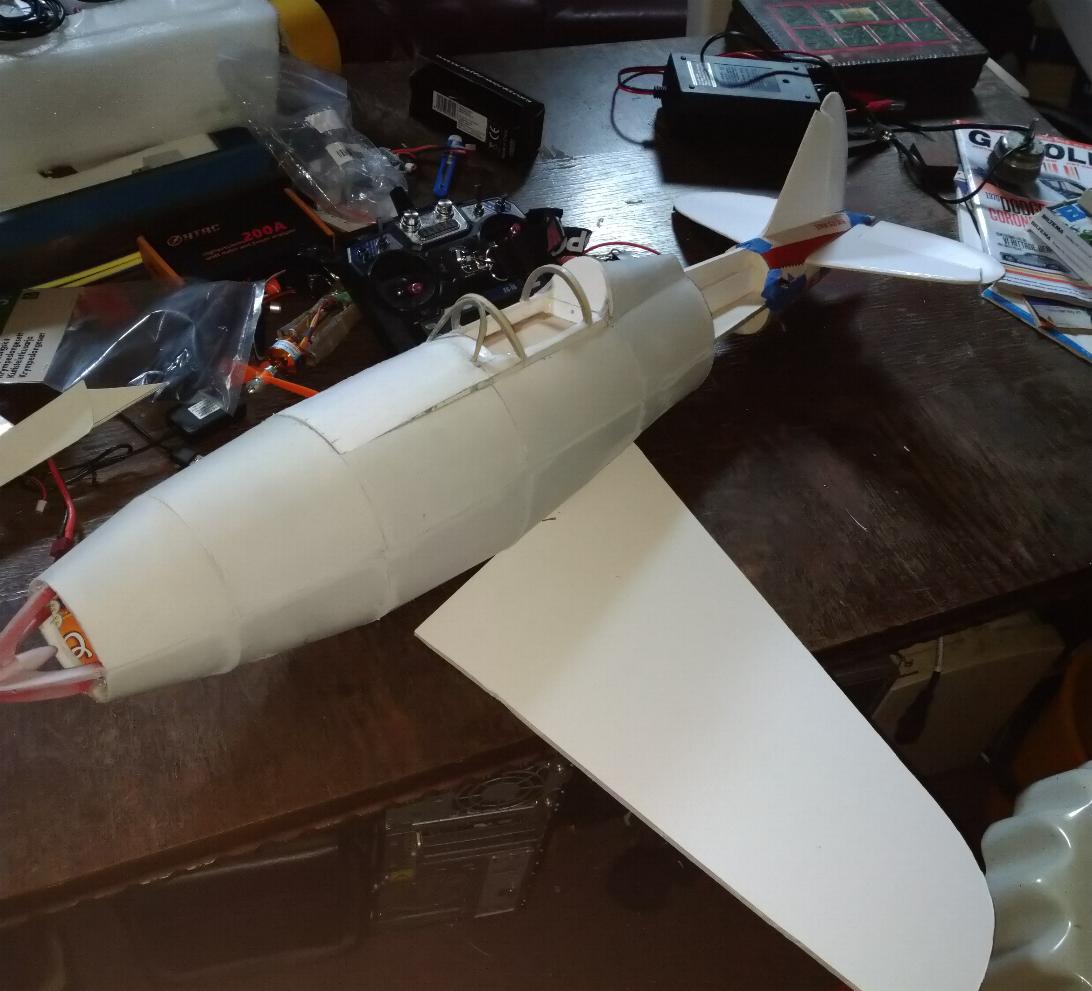 #13
wingspar at former with opening for the thrusttube goes through at place, and underwings shaped. Begins looking as a plane... 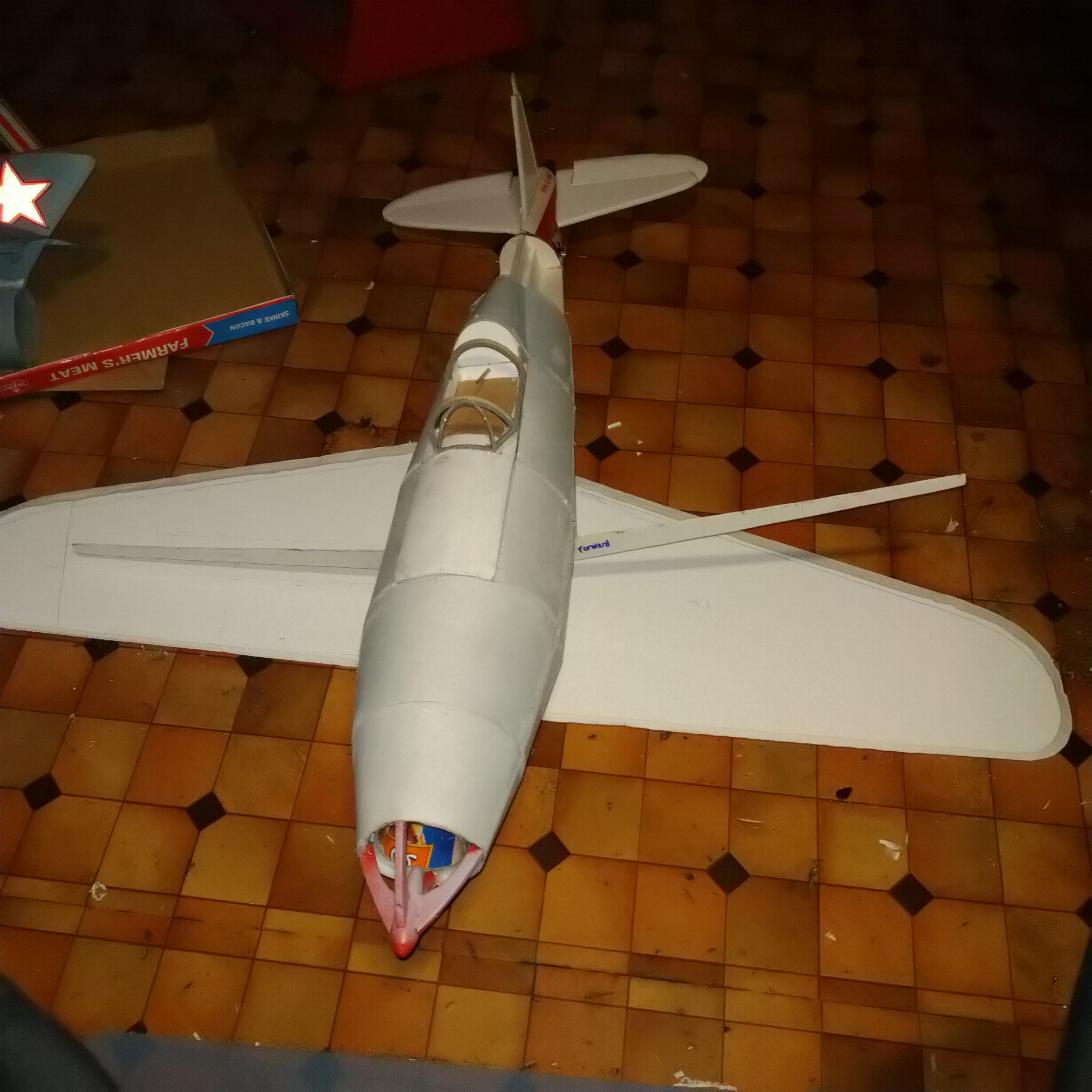 #14
underskin of wings is glued in place with spars in correct 6* dihedral angle. Need wait for retracts to come to make location because they comes with wheels. and dont have the measures on wheel/ to retract servo. Rest of the skins at fuselage done too... now its "just" finish work before paint. Wings can be painted later 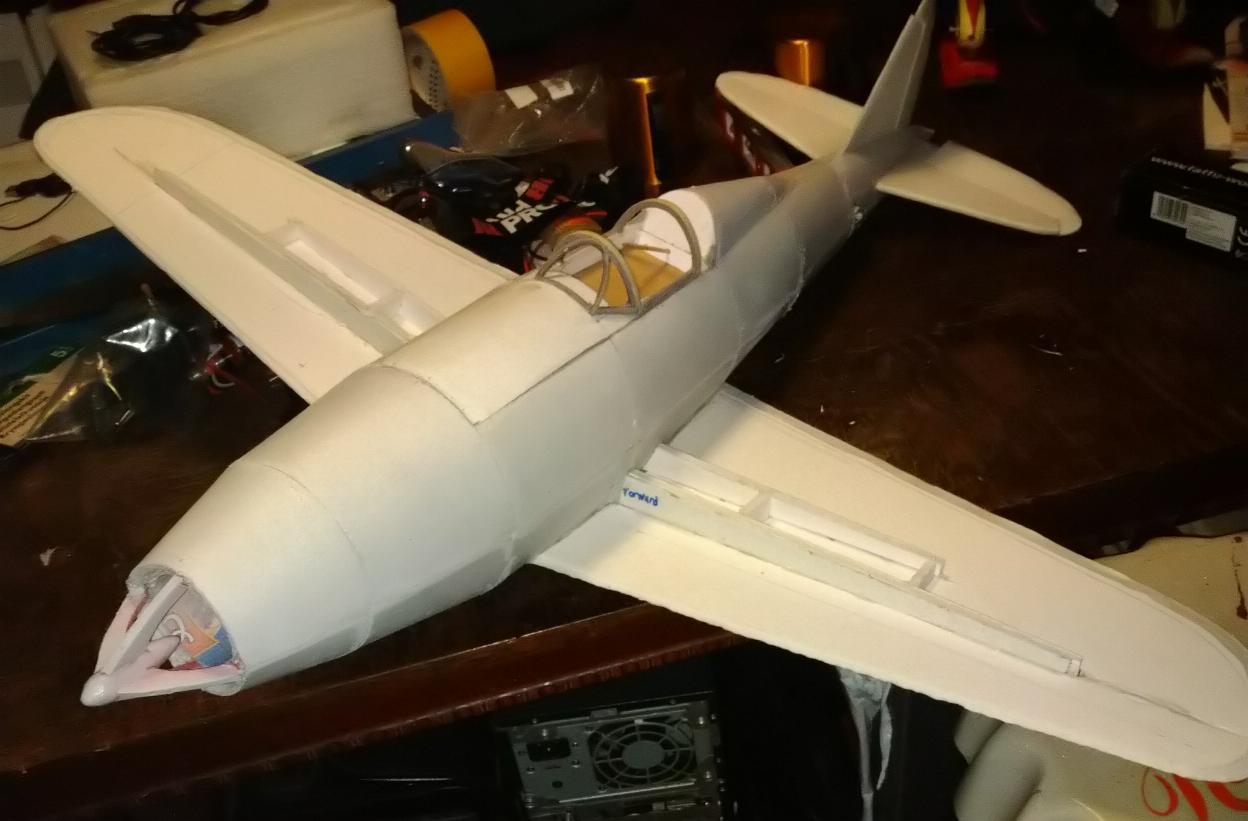 #15
my solution to strenghten canopy to not chrush it by a up-down landing.. Shape a metalrod/ servo push-rod to fit inside the canopybow who gets possible easiest damage, the front one. Glued in place and go down into foam in hatch

#17
hatch with canopy and pilot ready! 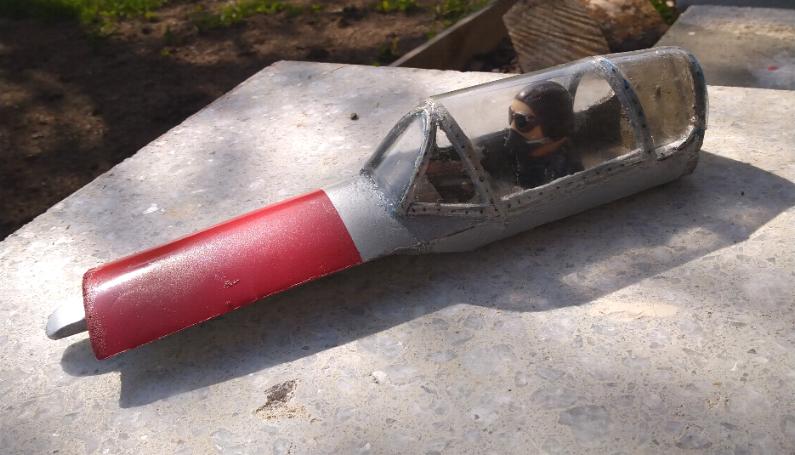 #18
not quite finished, but far on the way.... at least the fuselage is . Then its time set up electronics, pushrods, eg..
Every skin connections have been fitted with marker for nails before last layer of paint, pluss a few more shapes.. Its possible see close up , nice effect..... its also more silvery week green hued underbellyed than shown on pictures, to make easier see in air, than just silvergray. Outer layer of clear isnt perfect smooth, more to cover up as an thin thin layer, than give best shiny view, for keep lower weight..
In air, or some yards away ist not possible see mishaps anyway.

The small fin behind cockpit, is the cockpit/hatch lock, when pushed backwards a pin in rear part of cockpit gets far enough back to release. Front of hatch is just a "lip" going under skin in front.

- hopefully electric retracts arnt as far away in delivery, so can get wings ready too... 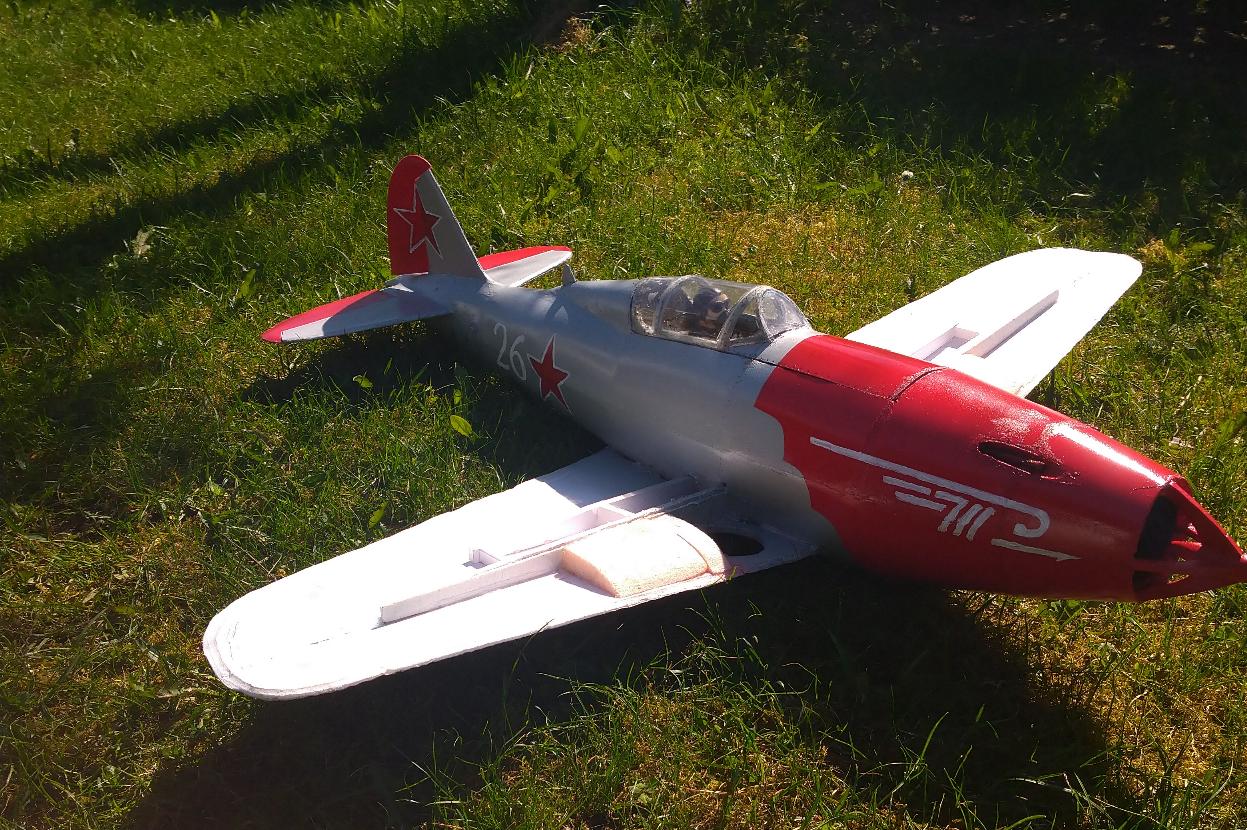 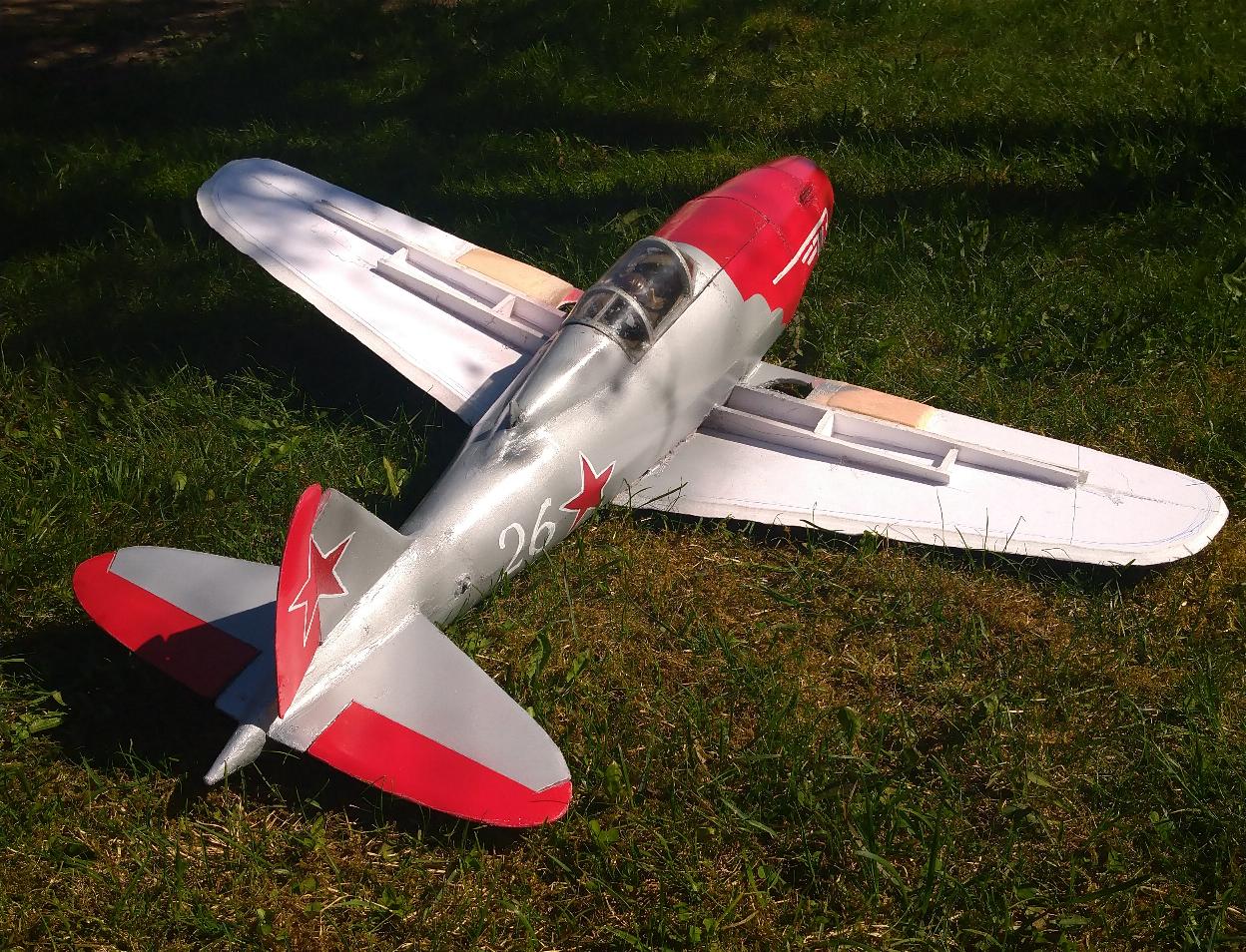 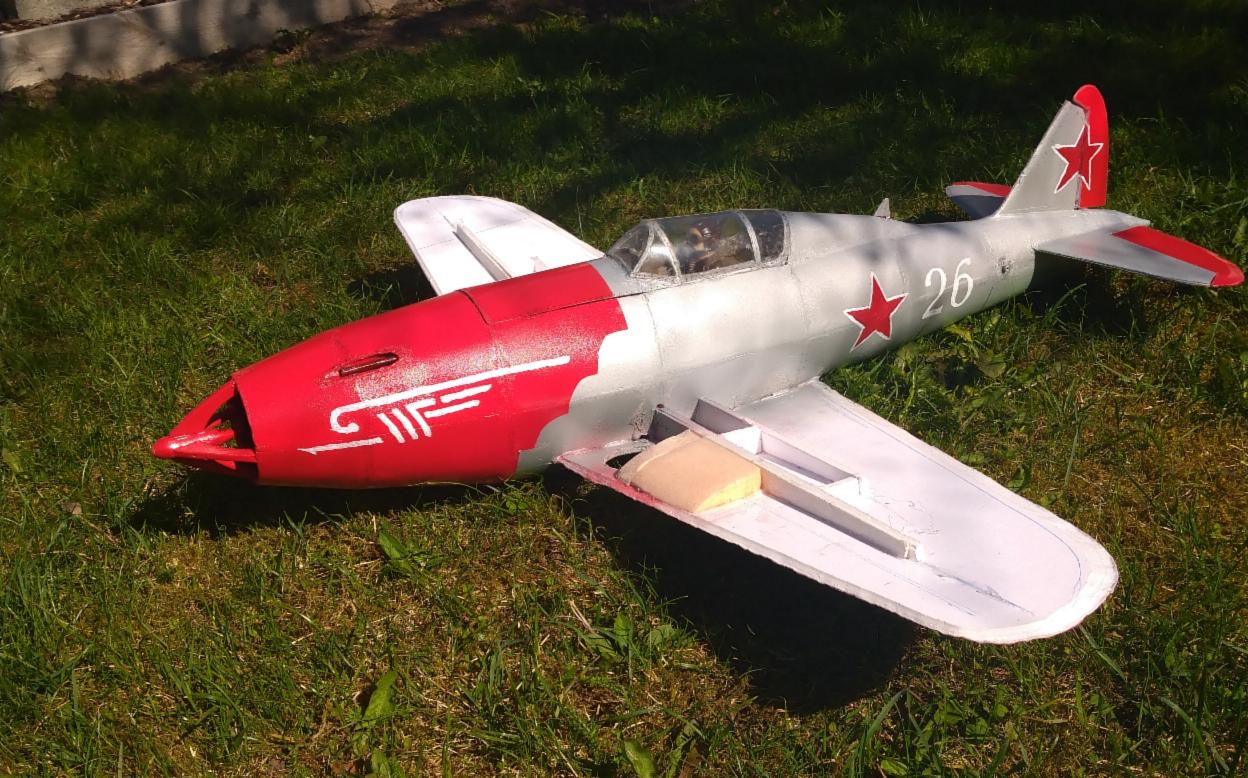 #19
what of course many wants see, is about exhaust from the EDF, here it is :
Holes are made for retracted wheels. and on the picture its possible see a bit, the "shimmering" green note at silver here. 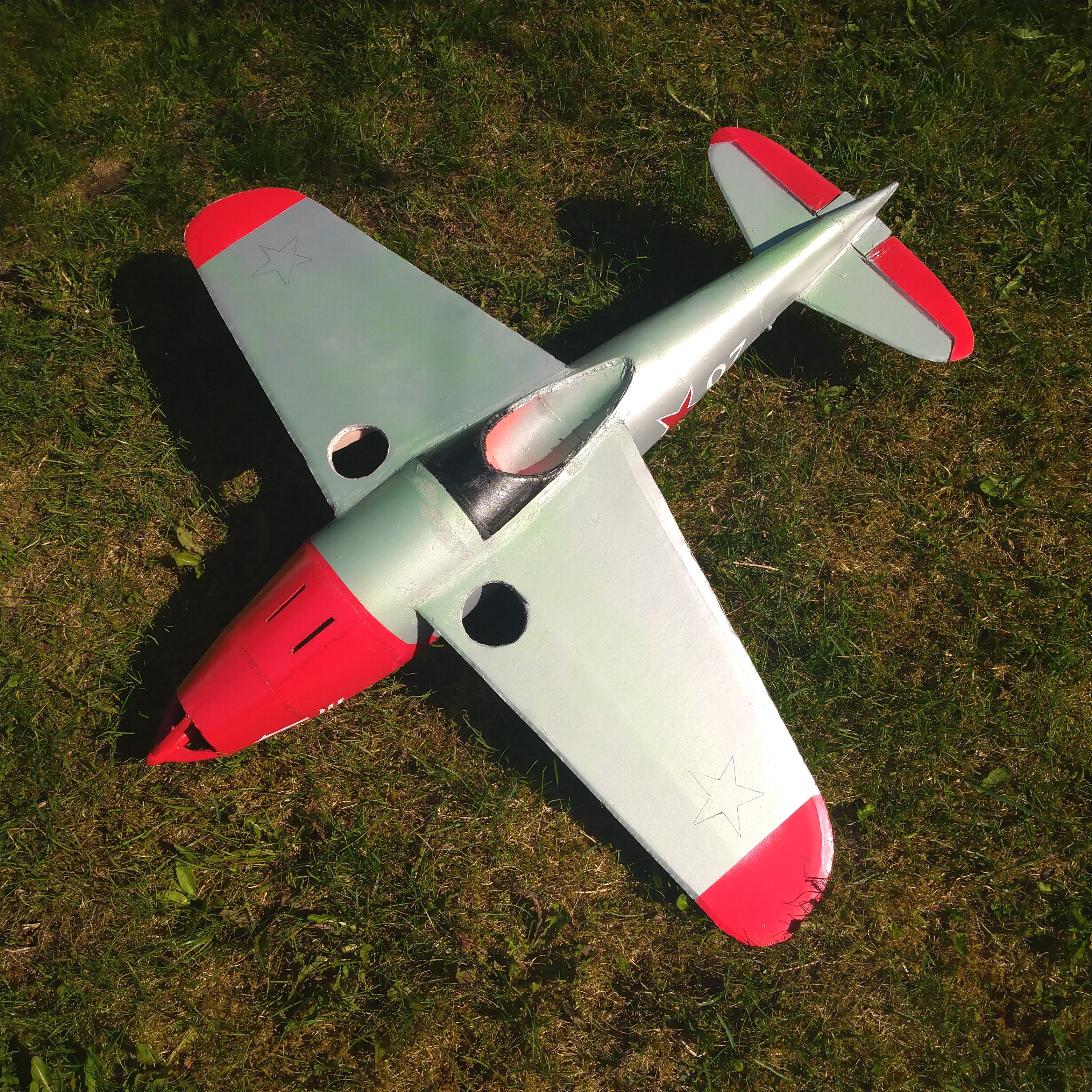