#1
I was on shift in the ER the other day, looking for inspiration when EMS brought me a patient. 35 year old guy who'd broken his leg when he fell off a ladder. EMS had immobilized the fracture with a SAM Splint. After my assessment, the splint was removed and the tech picked it and started to throw it in the trash, then it hit me: we throw these things out all the time. And the gears began to turn... 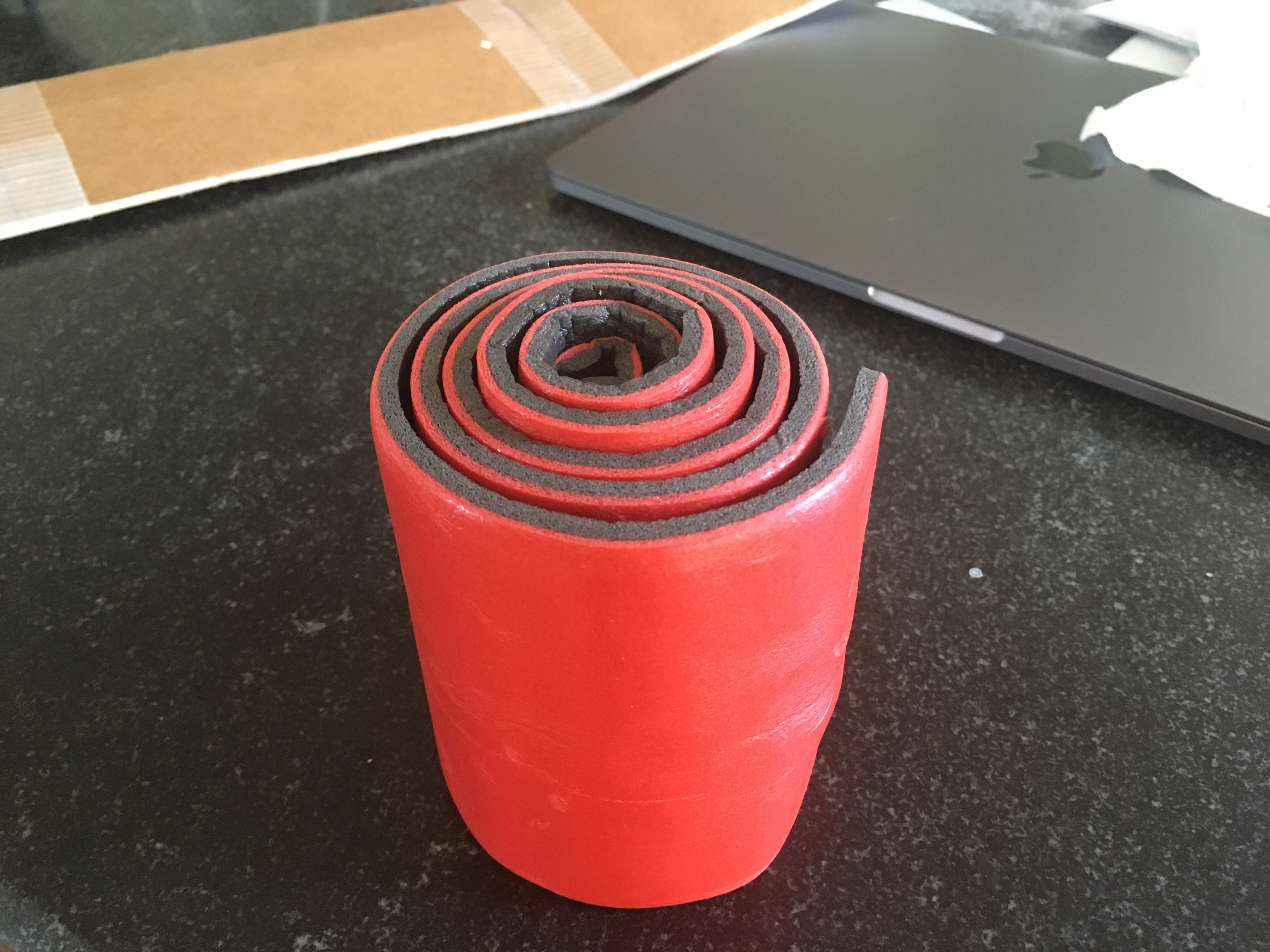 SAM stands for Structural Aluminum Malleable: a compact, lightweight rollable material used to austere environments to immobilize fractures. It's simply a malleable piece of aluminum with a polyethylene closed-cell foam coating. It's floppy in its native flat state, but once bent and formed it becomes much more rigid. Certainly more rigid than foam board. The standard SAM splint (SS) is 36"x4.25", which is good for a mini build. Pricy material for a scratch build, at ~$10 a piece, but they're throwing them out at hospitals around the world.

So I grabbed two of these splints and set out to build a plane. Since I was already familiar with scratch building the FT Mighty Mini Tiny Trainer (a name which my wife thought was hilariously emasculating), and the SS size seemed to fit the fuselage length and wingspan, I decided to model this build after the MMTT. 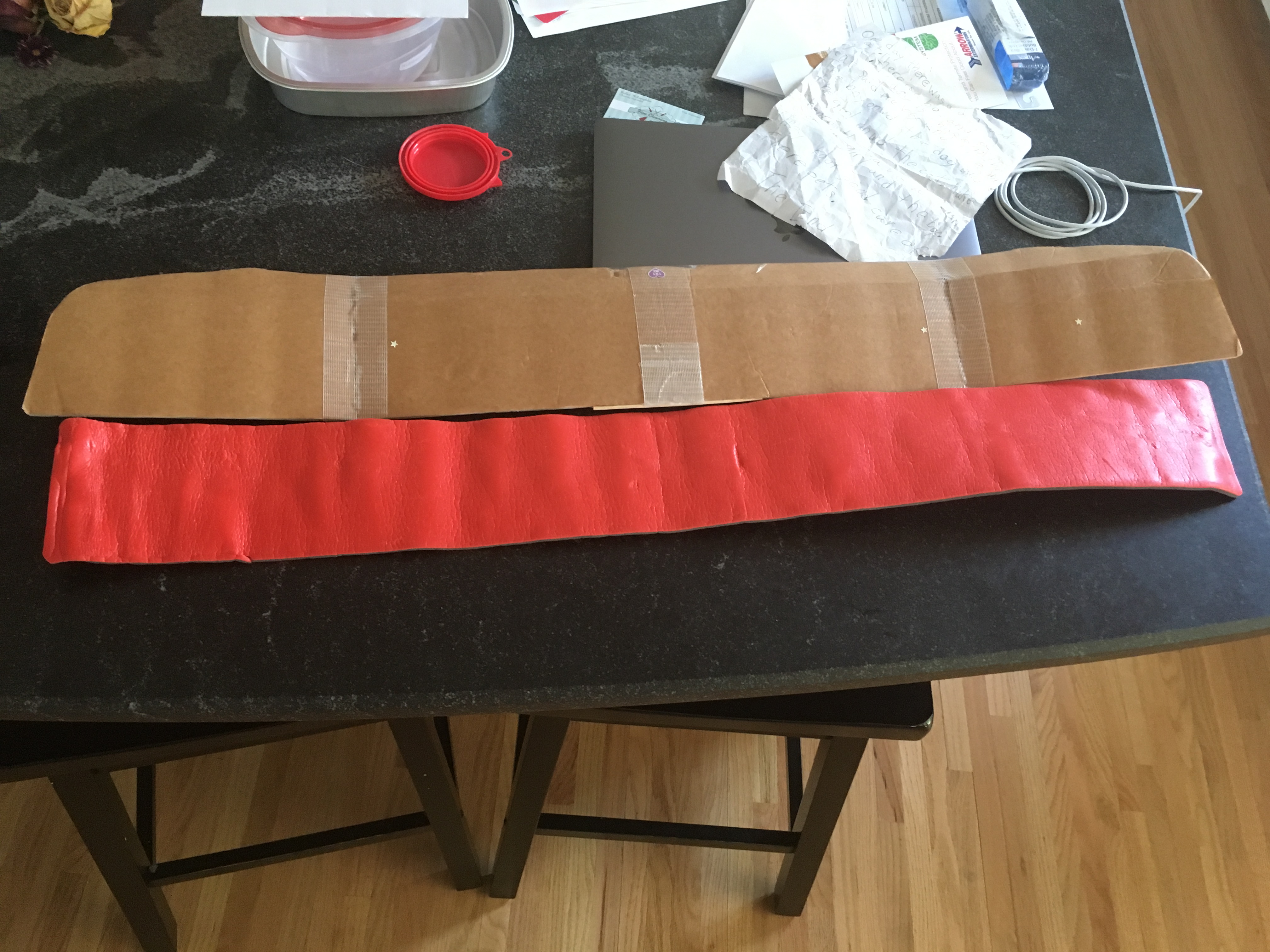 One issue I was initially considering was weight. An SS is significantly heavier that foam board, I was worried by weak power pack A motor wasn’t going to cut it. Here’s a weight comparison of one 36" SS vs the standard polyhedral MMTT wing. 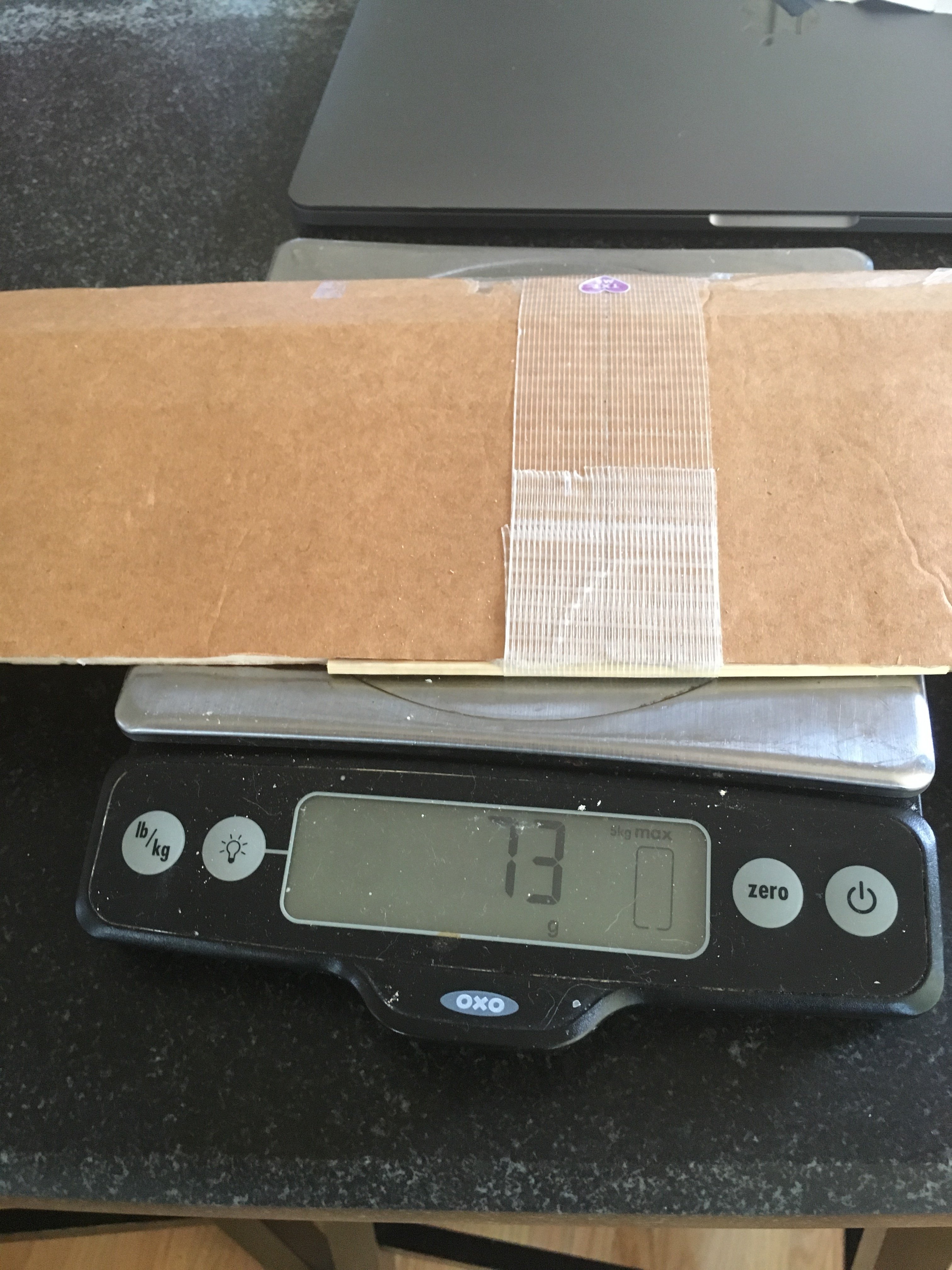 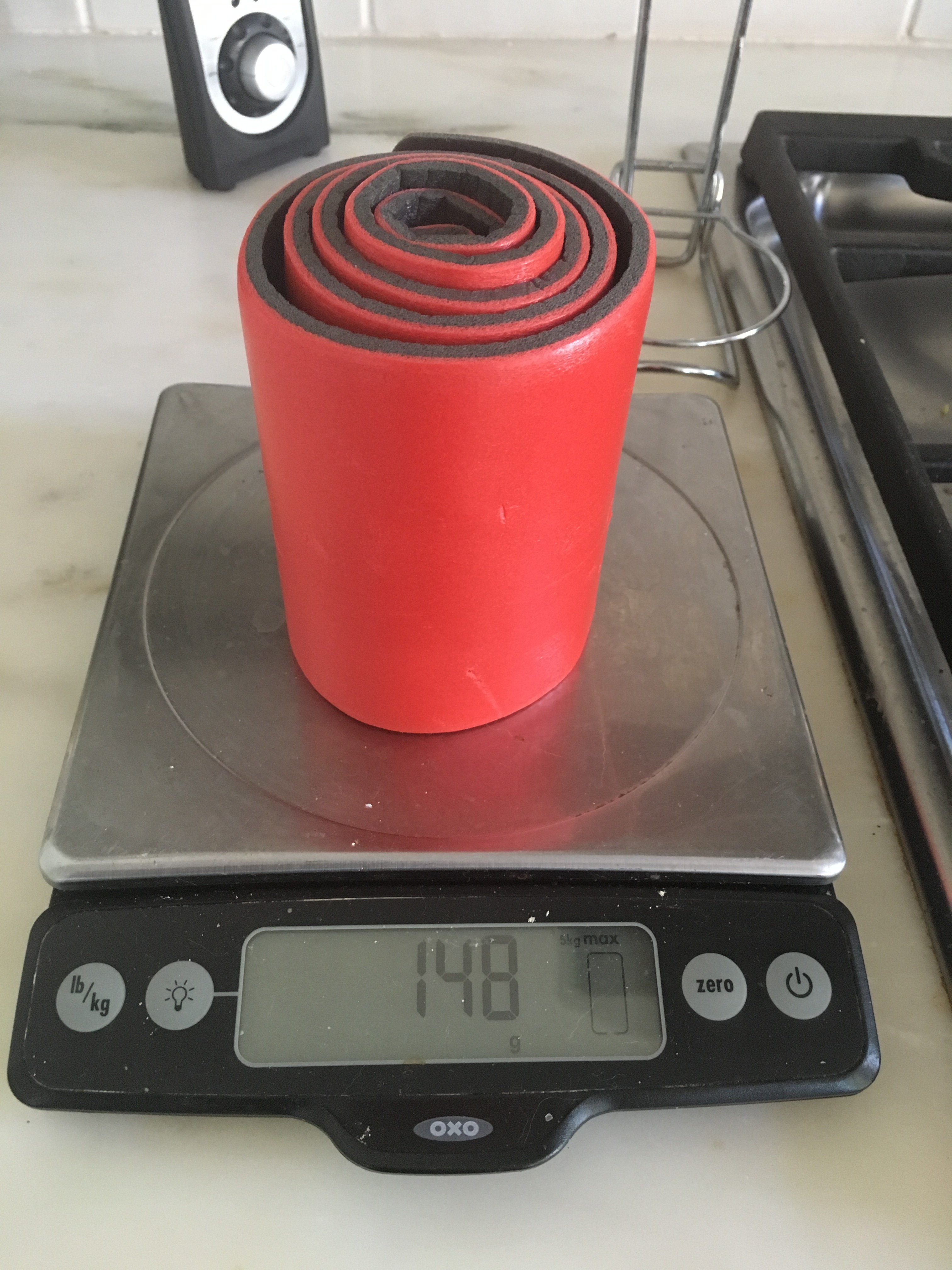 So, about double the weight. But, I knew I was able to get my featherweight MMTT airborne with around 40% throttle and a good throw... so I proceeded with caution. Plan was to use a single splint for the wing, and one for the fuselage. I knew that with only 4.25" of width for the wing I couldn't fold it in half, and I also knew that the SS would be quite rigid with just 1/2" folded over. 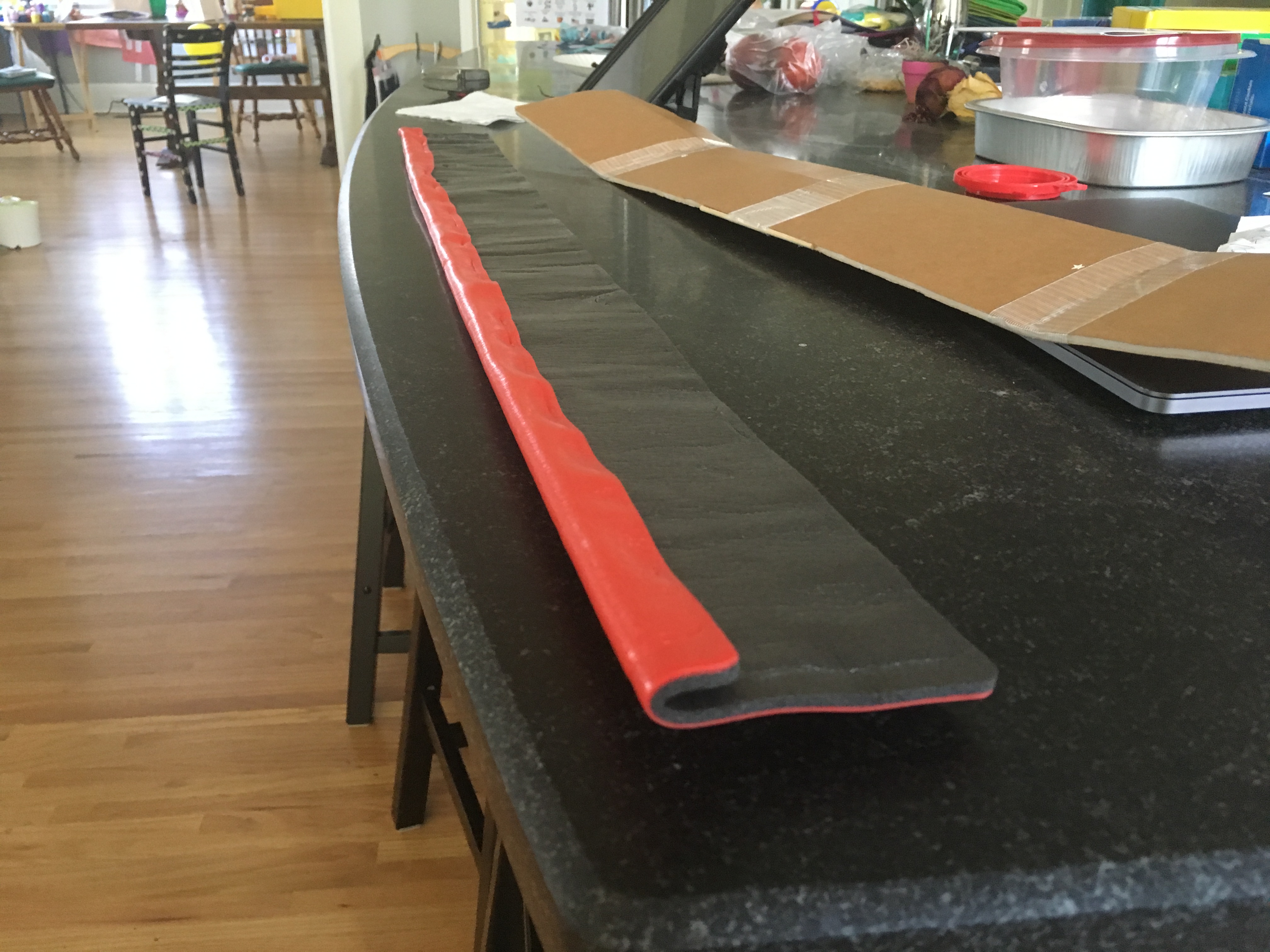 Even still, my wing surface area was pretty lacking... so I decided to add relatively large ailerons to make up for it. Added a bit of dihedral. Forgive the messy taping, my kids were distracting me. 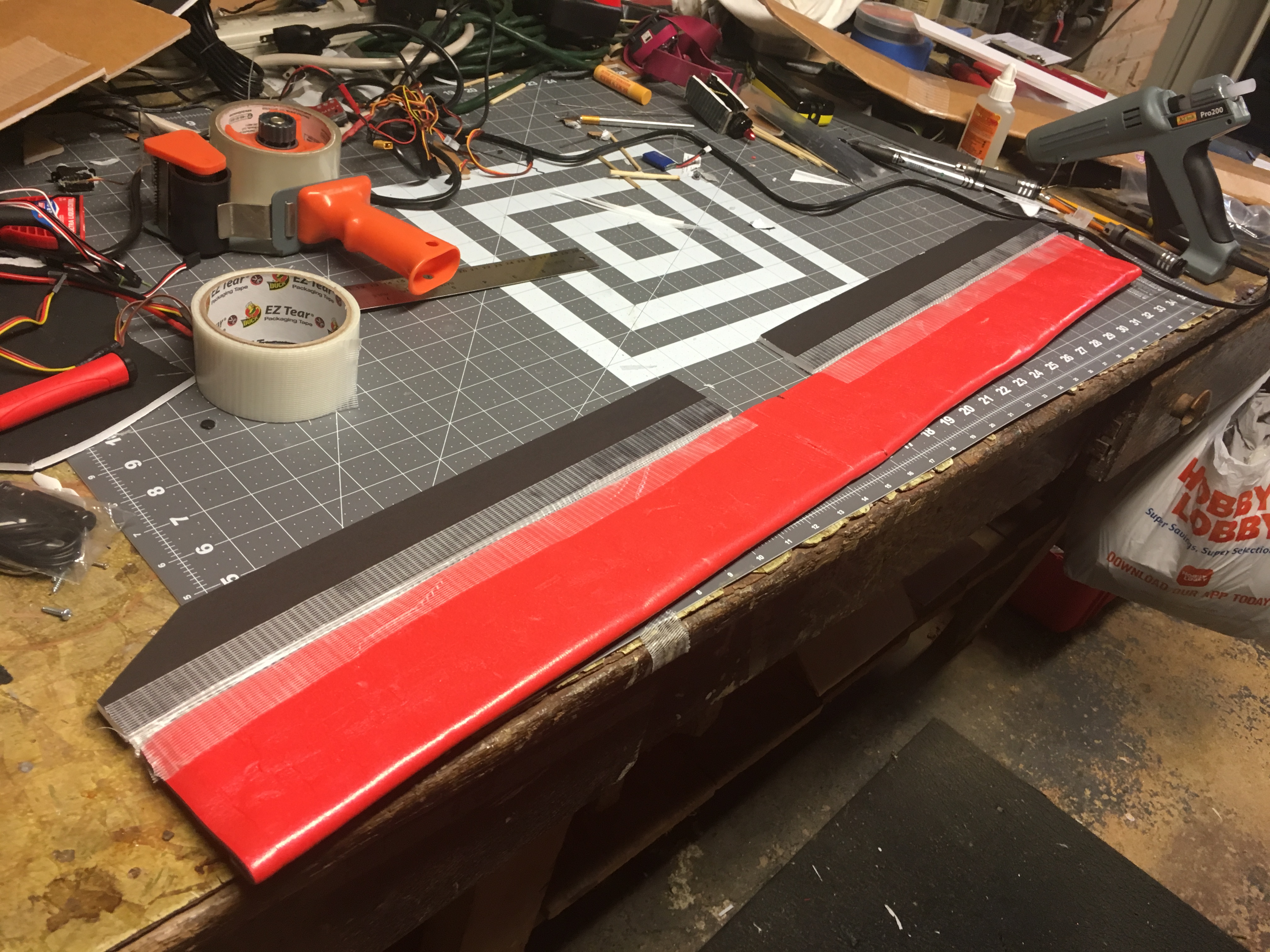 For the rest of the plane, I knew I had enough material for a fuselage and either a vertical or horizontal stabilizer, but not both. Decided to do the vertical in foam board. Cutting the SS was not an X-acto knife kinda job, so I grabbed by trusty $9 Harbor Freight metal snips and went to town. 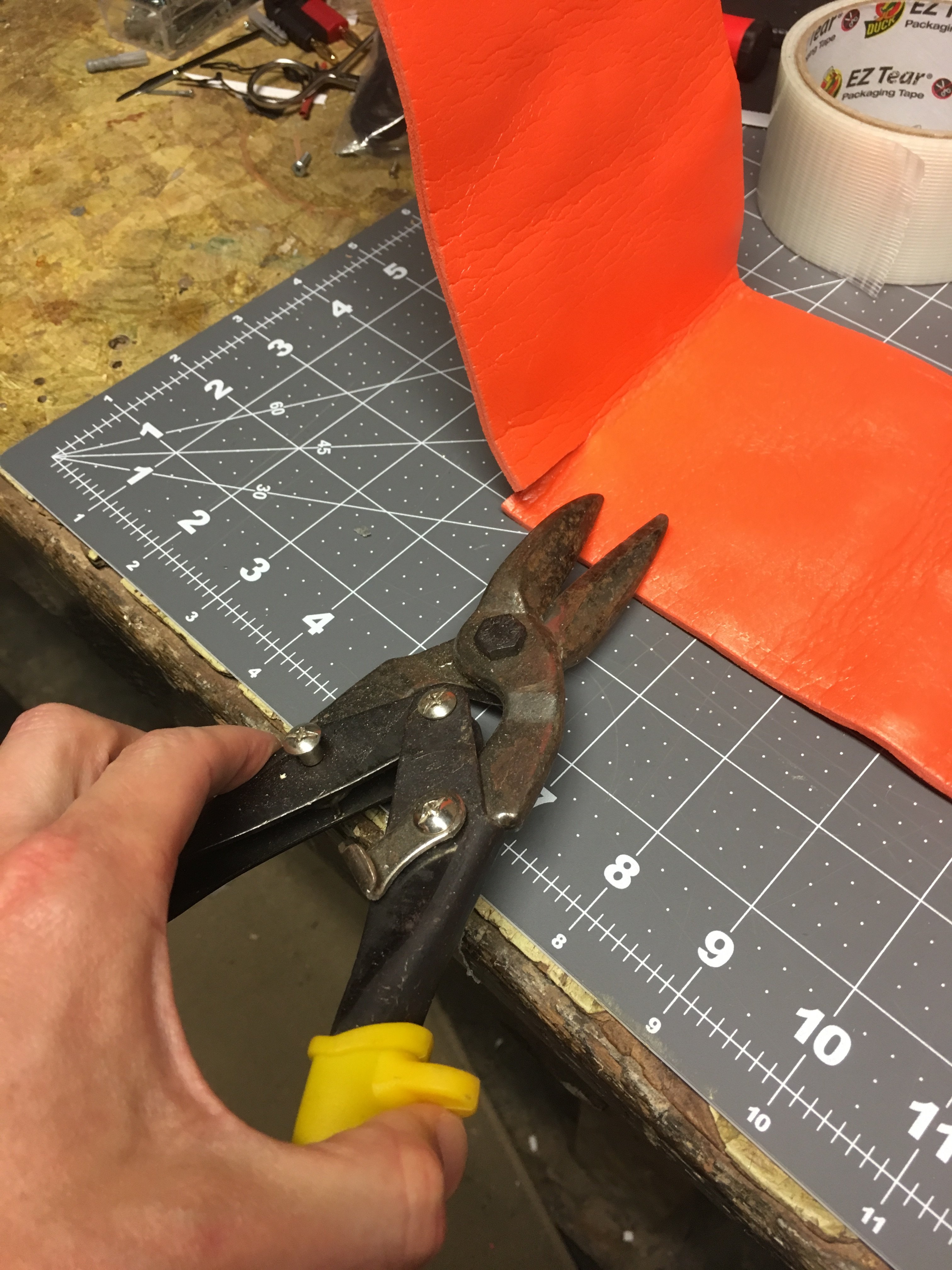 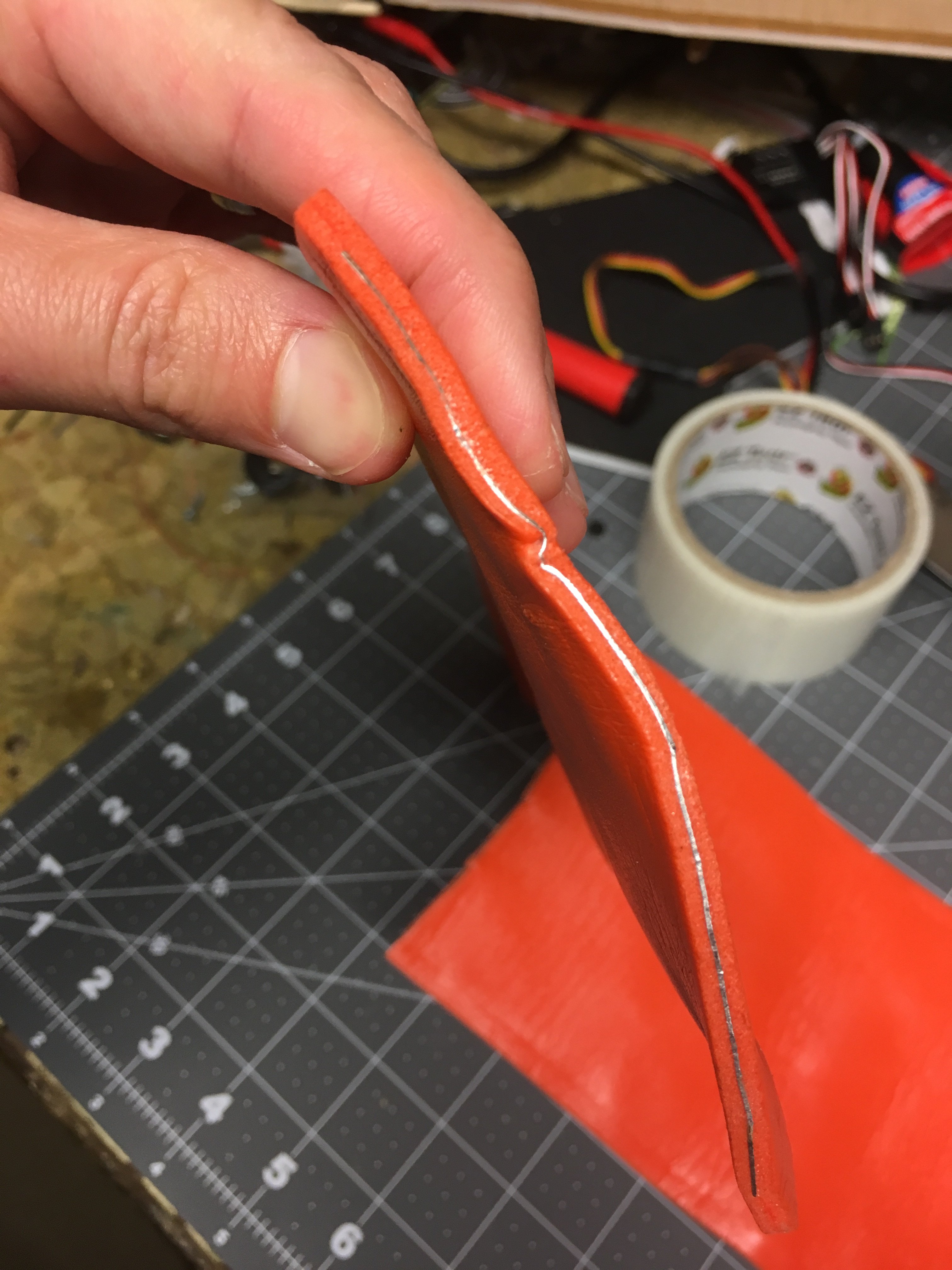 You can see the malleable aluminum core. Next I framed the fuselage with the remaining material. It's difficult to get precise folds, much in the same way you can't get precise folds in an aluminum can. The nice thing about messy looking edges is that each little bend confers rigidity (that's what she said). 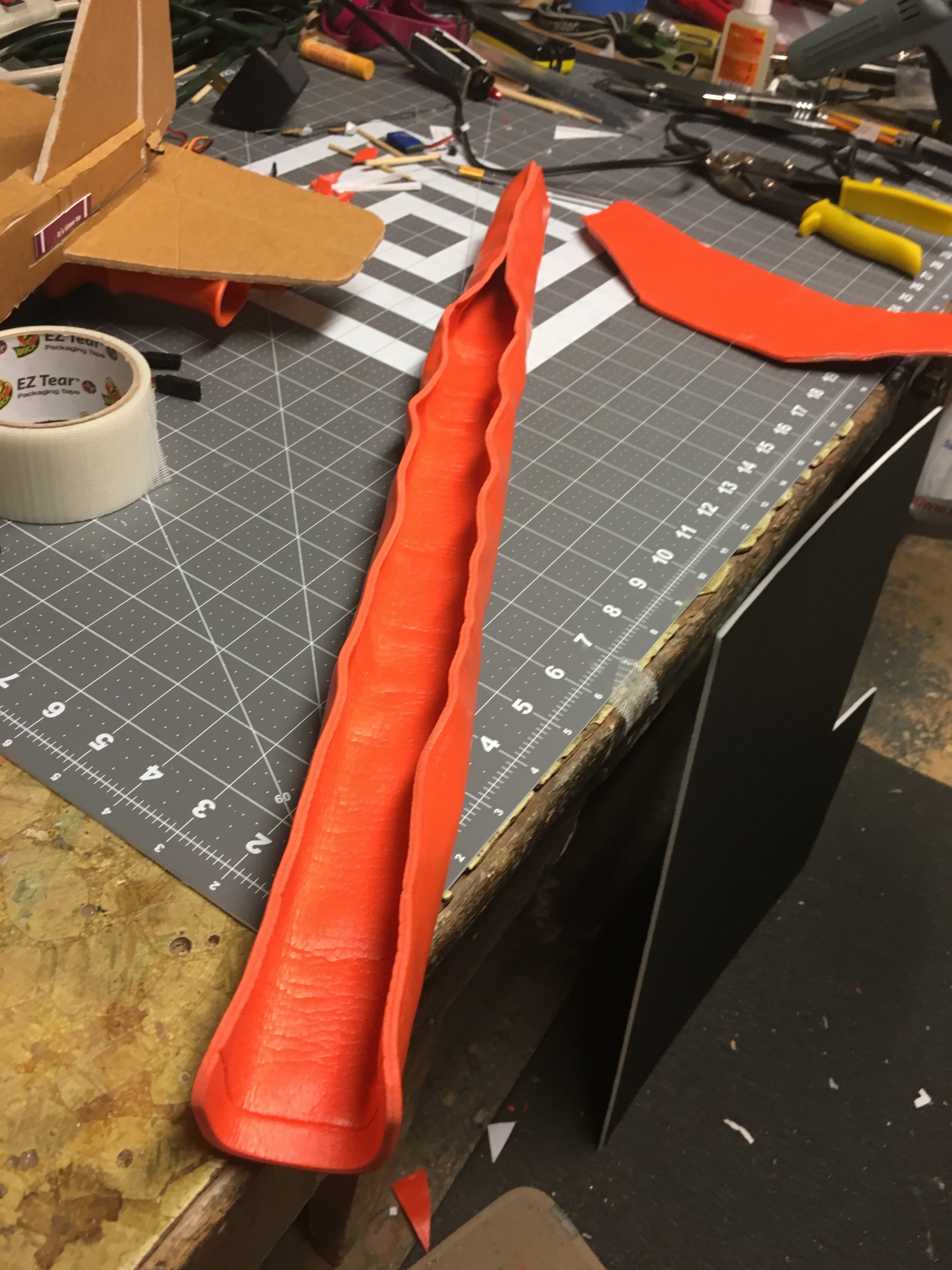 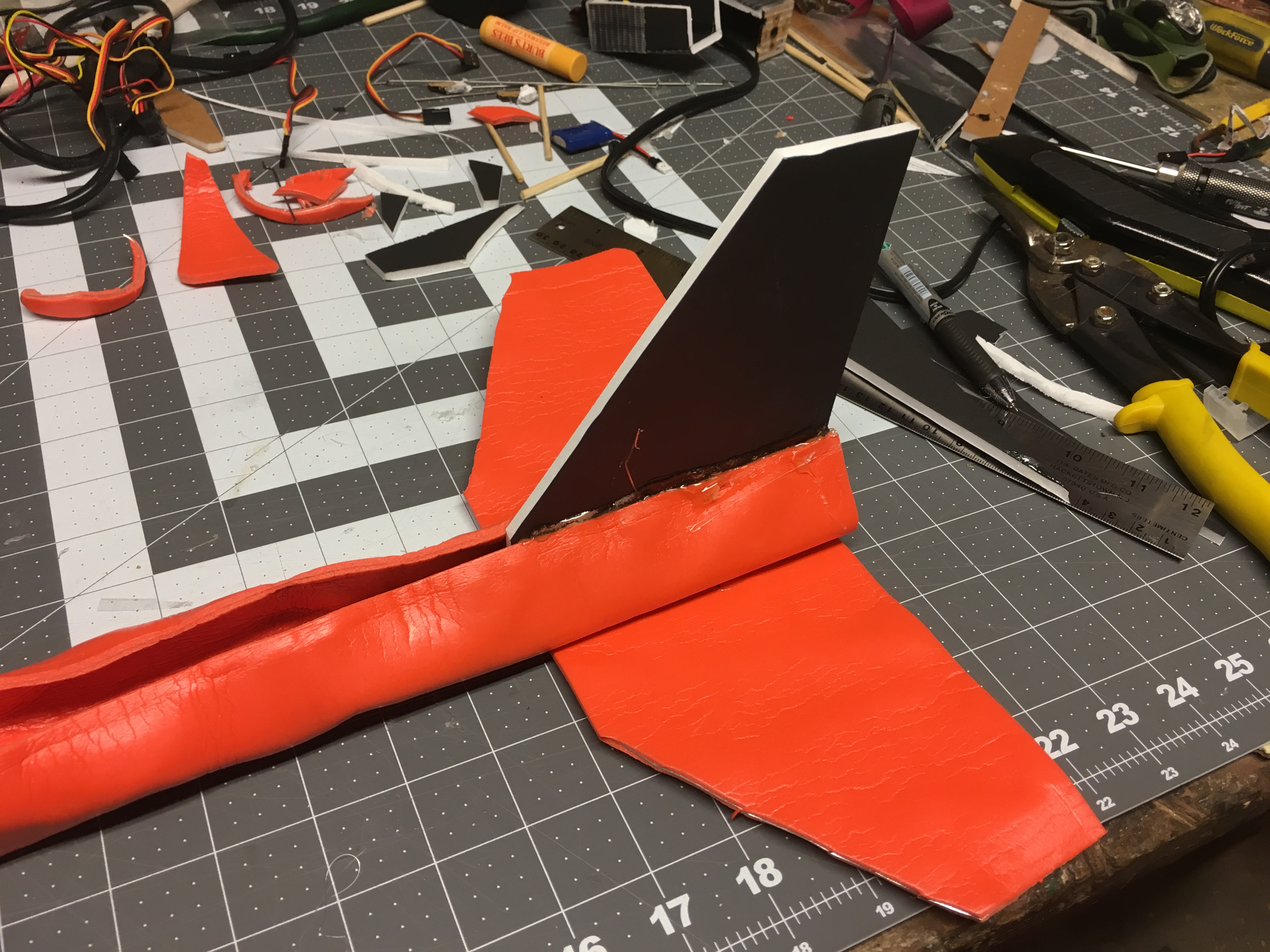 Another nice thing about the malleability is that I should be able to experiment with different wing shapes on the fly, more or less dihedral, polyhedral... shape the horizontal stabilizer etc. It's malleable but wind isn't really strong enough to bend it. 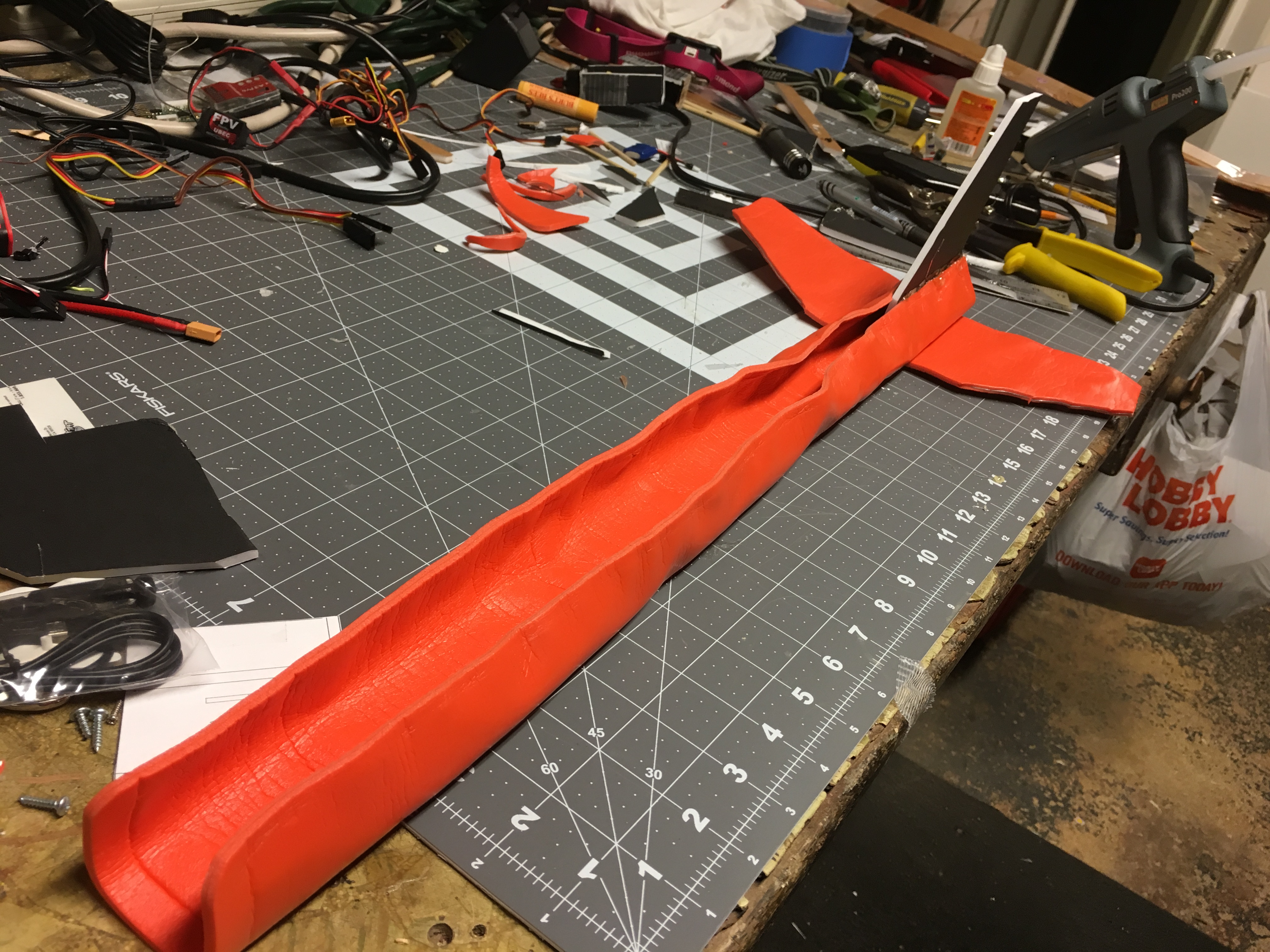 Placed the wing at approximately the same point as the MMTT, then drilled holes in the SS to secure the wing and the mini power pod with barbecue skewers. 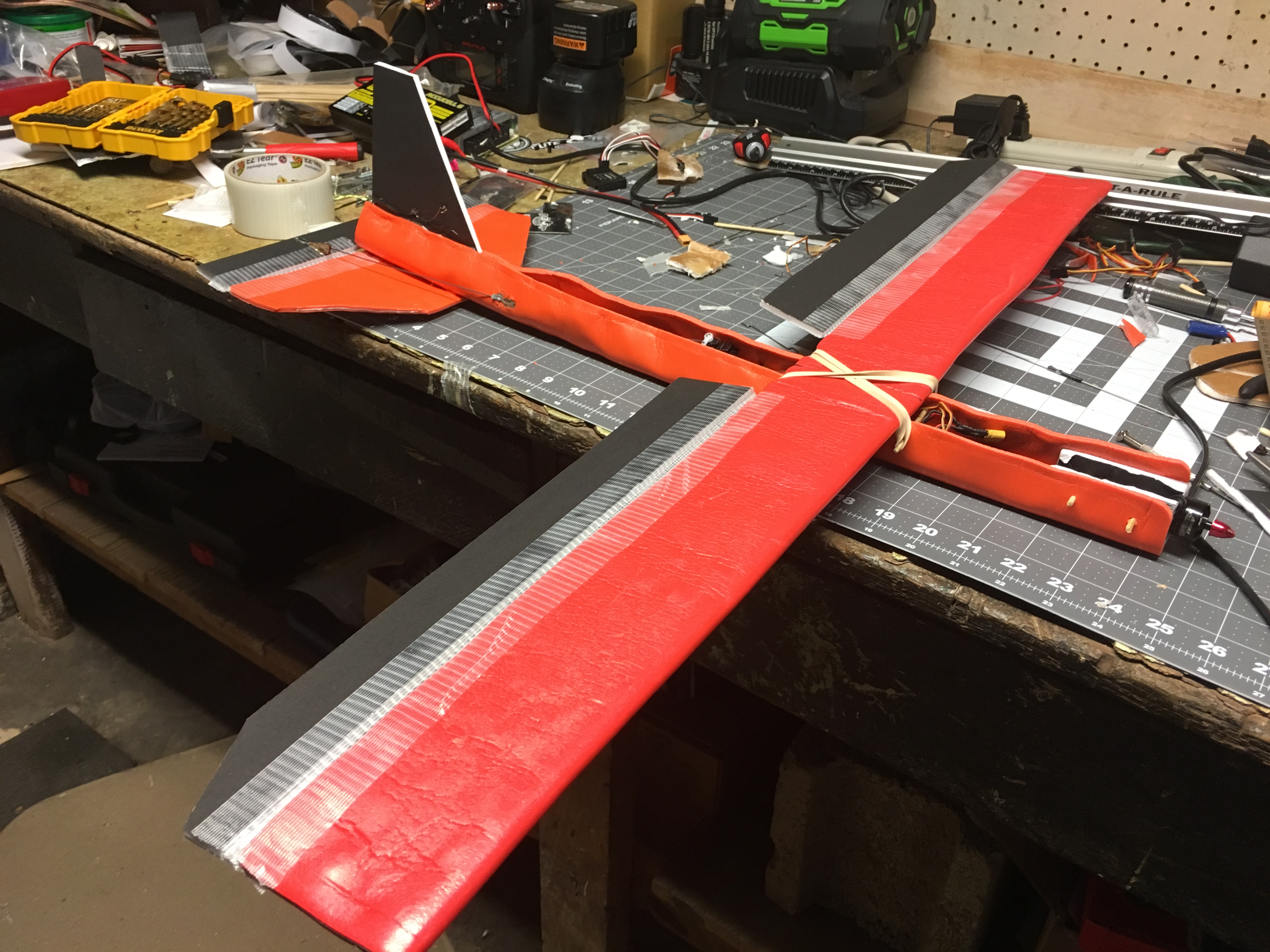 Decided to leave off a rudder for now, just elevator and ailerons.

Since all I have is the emax mt1806, that's what I'll be starting with. Total weight is a hefty 488g, a flying tank compared to the MMTT. According to the emax literature, max thrust on this motor is 460g, so I'll be at less than 1:1 thrust to weight ratio. No verticals, no acrobatics. All I have are some HQ 6x4.5 props, but that should get me close to maximum performance with a 3S battery here I think.

Can't wait to maiden, but I've got a couple of night shifts ahead. Will it fly? Taking votes. I'll post back with results.
Last edited: Jun 1, 2019

#2
I think it'll fly with that much T/W. I would say put your wing on upside down from what you have it at, because at the moment you have a KFM1 airfoil, and flipping would give you a KFM2, which tends to have better lift. 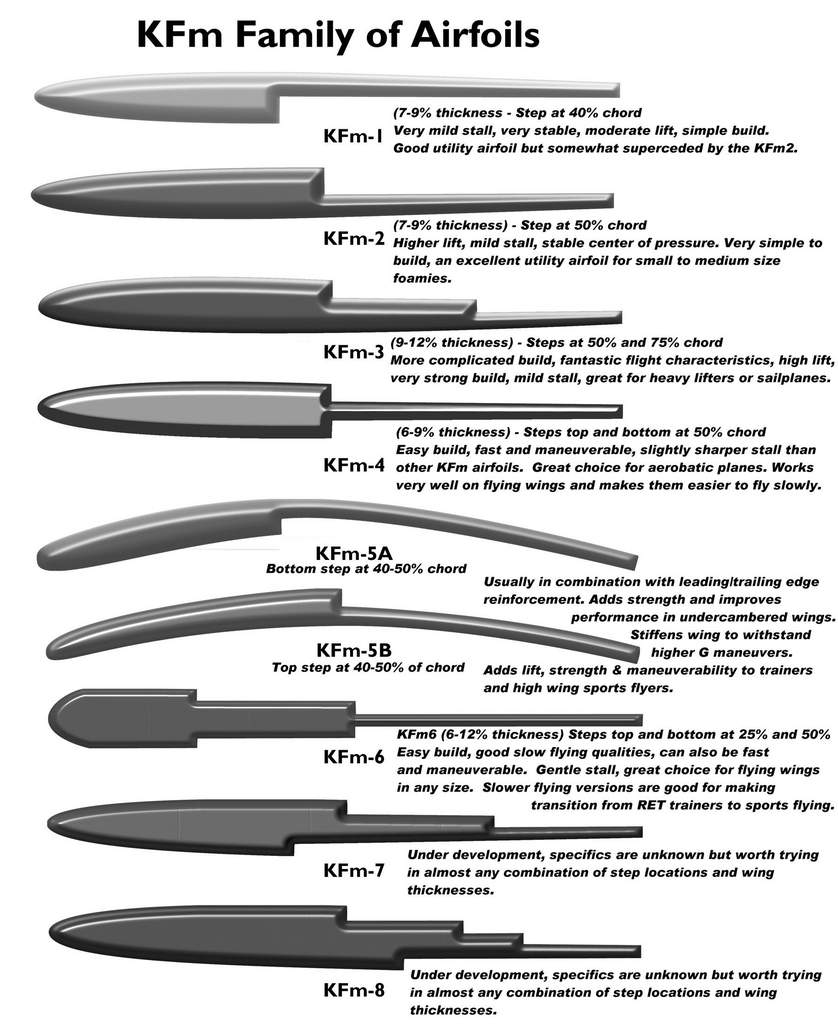 #3
b-29er said:
I think it'll fly with that much T/W. I would say put your wing on upside down from what you have it at, because at the moment you have a KFM1 airfoil, and flipping would give you a KFM2, which tends to have better lift.
Click to expand...
Nice graphic, I'll consider flipping the wing for sure.

Another thought: The aluminum body will provide a nice crumple zone on impact, and it should be easy to just push it back into place. Reminds me of the SNL Adobe Car, circa 1986.

#4
Update: it flew, kinda. I was correct that it was easy to reshape after each crash, but the malleability was a double edged sword. Since the flight characteristics changed with each crash it was hard to make predicable trim adjustments from one flight to the next. One thing that was consistent was that it was very tail heavy. Even with the Tattu 3s battery on top of the motor, the cg was always behind half the wing cord. Kept flying with high alpha as if it was teetering on the top of a mountain.