#41
That could very work comparing booms with stark width differences. However you pretty much have to rely on maths to compare something like a 10x10mm square boom and say a 12mm round boom. Small differences/changes in other variables would skew the results.

Of course, I completely understand the response of, "What does it matter?" But that goes back to best practices. What I can't understand is why ESCs are STILL mounted flat when it is almost as easy to turn them vertical if the designer deems it critical to be mounted in the thrust column.

#42
Cyberdactyl said:
Thanks for finding the interest and time to explore the issue FGA.

I do think my setup may exaggerate the problem. While I do get a force pushing on the F20 boom at over 400g while pushing air at 50% power, it does seem odd to expect that much is exerted on the craft.

But at the same time, your setup also seems very low, especially since the area being increased is in the worst area possible (as opposed to under the motor) The area of a 9" disk is 63.6 sq in. Your 'benchmark' thrust was 885g with ~2sq in. of obstruction. Your drop in thrust was 35g after increasing the obstruction by ~5.2 sq in.

If we explorate and extend that out, we can cover the the entire disk with ~12 more, and then have a suggestive loss of thrust of ~420g. However, that essentially leaves 465g of effective thrust with an entirely blocked disk. . .
Click to expand...
That may be due to the fact that not all the thrust that hits the arm or what ever is blocking totally stops. A decent amount would change direction, compress the air around it and continue on albeit loosing some of it's energy and in turn loosing efficiency. I would think little to none of the air just stops after hitting the arm/esc.

I wouldn't be surprised if when you put a solid disk the same diameter behind the prop that you still got at least a little thrust due to the above also but not get half as your maths suggest. I would also hazzard a guess to say that this would be because as you cover up the thrust column the thrust loss gets exponentially worse as it has less area to compress.

You can't just treat the thrust column as a solid tube that cannot escape outside these boundaries or allow itself to be compressed to hold more in the same space.

#43
Cyberdactyl said:
That could very work comparing booms with stark width differences. However you pretty much have to rely on maths to compare something like a 10x10mm square boom and say a 12mm round boom. Small differences/changes in other variables would skew the results.

Of course, I completely understand the response of, "What does it matter?" But that goes back to best practices. What I can't understand is why ESCs are STILL mounted flat when it is almost as easy to turn them vertical if the designer deems it critical to be mounted in the thrust column.
Click to expand...
Agreed with you there Cyber but sometimes its a matter that involves all aspects of aviation design.... compromise. Mounting the esc vertical can have a drag effect when flying forward fast so depending on the application of the copter you're simply moving the inefficiency to another part of the frame. Plus on the Warpquad there is little room between the arm and prop to fit it vertical. Put it any lower and it sticks out the bottom waiting to be hit in a crash. The best place for them is inside the center section but some designs like the Warpquad don't have the room, plus the esc's will overheat there. Cranial suggested under the motor mounts which is a great idea but once again, waiting to be destroyed in a crash if the copter has no landing gear there. For the Warpquad, I'm happy to take a half percent cut in thrust if it means my esc is cooler and protected but yes on some bigger designs a little more thought would help.

The thing that will help positively with no down sides besides increased cost is when esc design improves. BS12a is about 20mm wide and about 10grams, the F20a is about 25mm wide and about 20grams and they both have large caps sticking out the end. The KISS 12 and 18 amp esc's are only 12mm wide, 1.8 grams apparently and no caps needed.Plus they bring many new features to multirotors like active freewheeling and don't require SimonK/BLheli FW due to being designed right from the start for Multi's and because they are better designed and use better components they also run much cooler and more effient. They also open up the possibilities for much higher rpm's without syncing problems.

#44
One justification putting the ESCs out in the thrust column, not flat mind you, but in the thrust column vertical, is the growing trend of removing the heat sink plate and reducing the size of the ESC. They are basically shifting the problem elsewhere. With these minis getting so small, the question then becomes, what's a lesser evil, compromising the thrust column, or using an accumulator/dissipation mass for the FETs out of the air stream? If given only that as a choice, a lot more study needs to be done.

The vast majority of air mass that passes over an MR is the air that passes across the booms, by a good margin. Now. . . turning the ESCs flat horizontal, does as you say, in that when the z-axis is more than ~60 degrees to the direction of travel, it is a plus.

But that reduction in air resistance is only advantageous in that specific condition and orientation. And I suppose in the real world that's true. When watching elite flyers like Warthox, he does spend a good deal of time with the Z-axis far from the direction of travel.

But Warthox is one fellow that has the skill to shift to a primarily WOT, or close, for most of his flight. . . and that's where I contend a flat vertical plate boom moves into its element, by aligning all the surfaces in the direction of flight, and by keeping those additive fast moving air masses, the prop thrust + the forward speed, as the best of both worlds. . . during that orientation. My Cyber Hex prototype is but one step towards the true ultimate racing multirotor. 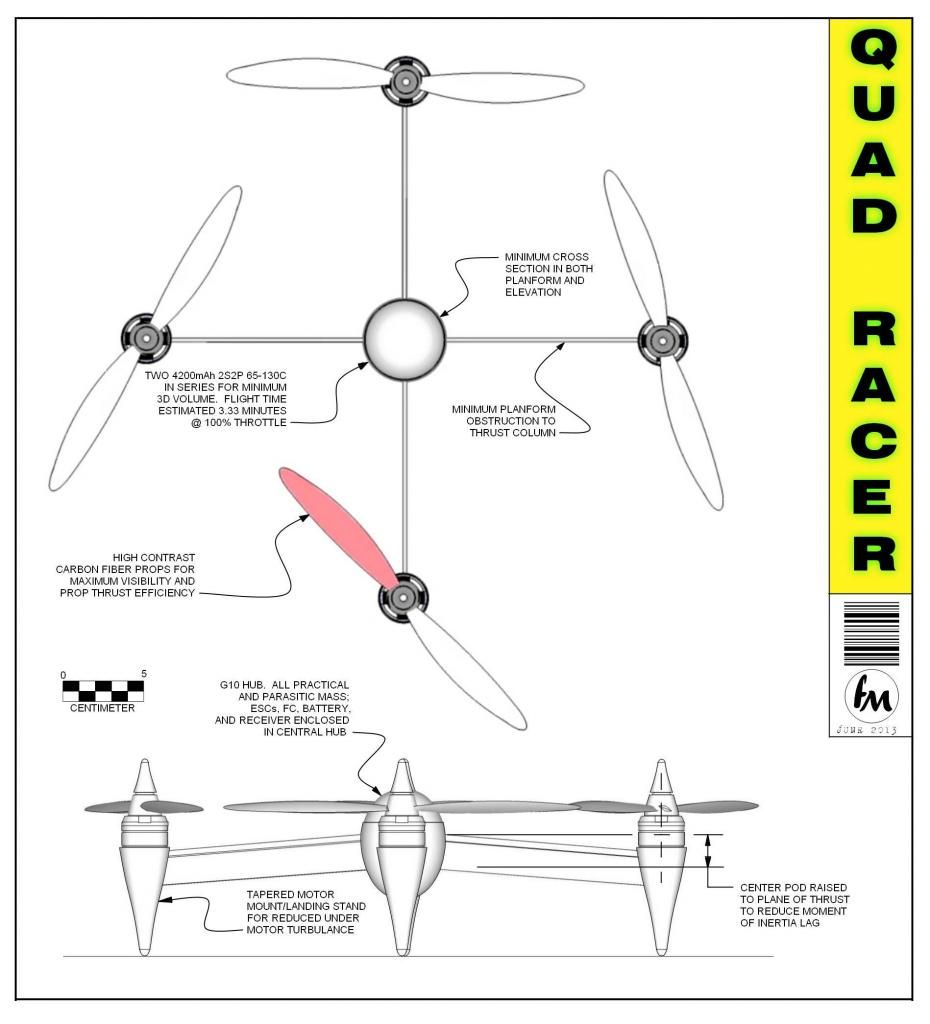 #45
I love it when you use big words like that

It would be cool to see you build this as theory can only go so far. Plus it looks cool

A nice strong method to build those arms and hide the wires would be to laminate 2 sheets of 1mm carbon plate between some plywood. Make the plywood the same thickness as the wire used and you can have a hollow section to run them inside. Of course you could go to the trouble of laying up the carbon wet with some Rohacell foam as core material and lay the wires in during the layup but the first idea is much simpler and quicker.

#47
It's even more fun when your dealing with the cloth! Back around early 2003 my friend purchased the molds for the Europhia 2 for around $12,000. You'd start off with a pile of carbon, fibreglass and kevlar cloth and two days later this would pop out of the mold(we got it down to two days after practice ). It's one hell of a lot of work and you begin to understand the prices asked for the commercially built models.
http://www.skipmillermodels.com/Europhia_II_p/europhia_ii.htm
I'm actually surprised they still make it!
Last edited: Apr 28, 2014

#48
In just 2 or 3 more years, it appears there will be a graphene woven-fiber in a metallic binder, a plate about as thin as a playing card with the strength of 5mm of carbon fiber or more. The military will get their hands on it first. Maybe the average joe will see it in a polyepoxide binder in 3 or 4.

#49
What ever happened to "Bucky Paper" (spelling?)? That was supposed to be the next big thing.

I have no idea what kind of epoxy would suit a graphene fiber.

However, I suspect to cut a military-grade graphene sheet would take something like a Wire EDM.

Mentor
#53
"Cranial suggested under the motor mounts which is a great idea but once again, waiting to be destroyed in a crash if the copter has no landing gear there."

I had envisioned a slot in the boom below the motor mount the esc would slide into. Therefore the ESC would have a motor mount above it and another plate upon which to rest and to protect it, below it.

I think someday we may see motors with integrated, mini ESCs. No motor leads, just ESC leads to connect to the battery where the ESC is inside the motor and in its own metal enclosure below the stators.

#54
Finally connected up the FPV stuff to the hex. Put the card cam mount from the tri now that it has a gimbal. Works very good considering the prop tip is even with the end of the lens. I thought I'd get some thump-like shake to the image, but it's very solid. I have a pad of moon-gel between the frame and the mount. That 'C' mount has 1mm of clearance on a flat surface, so I take off with my face buried in the grass. 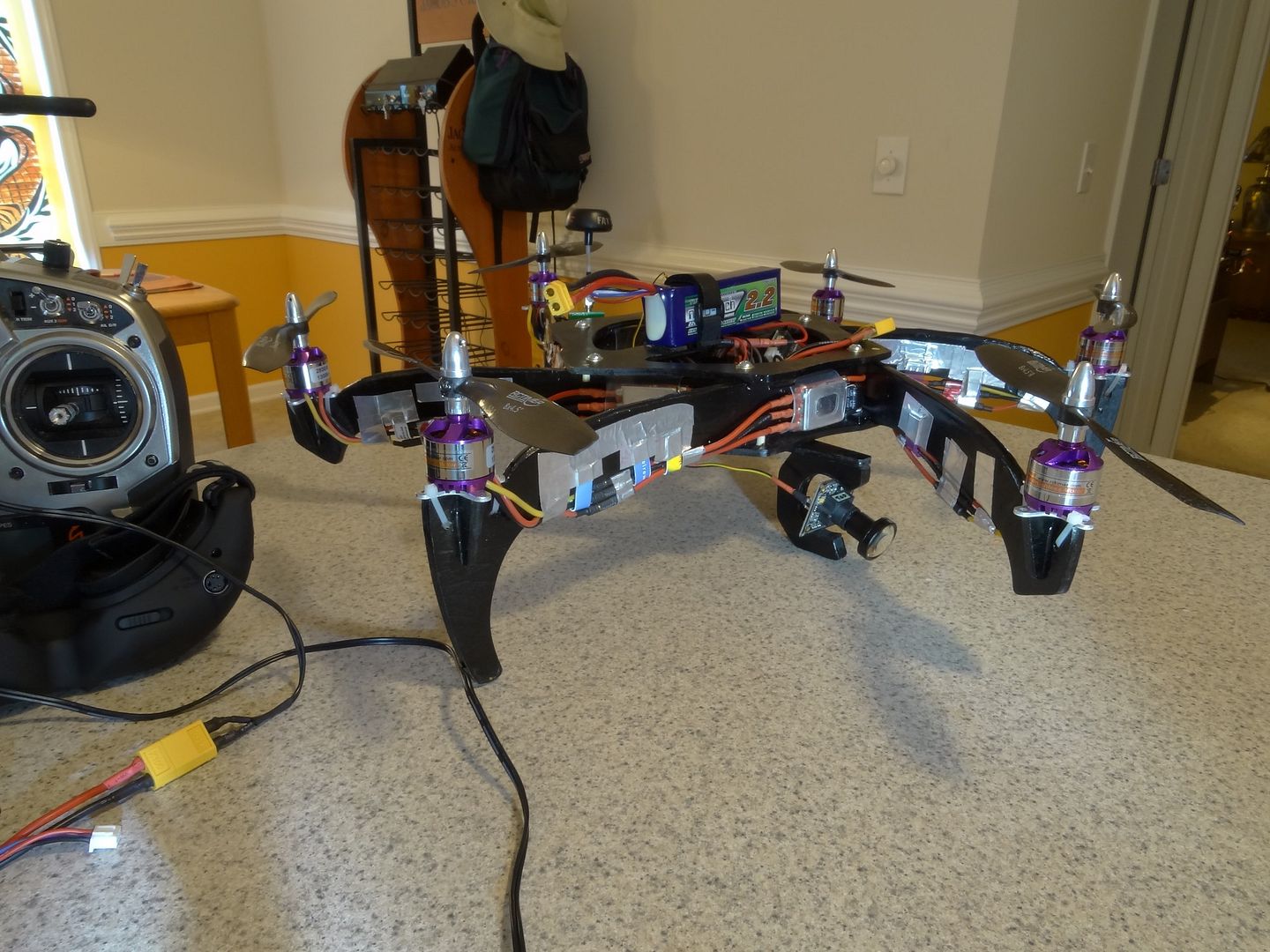 Mentor
#55
"That 'C' mount has 1mm of clearance on a flat surface, so I take off with my face buried in the grass."

#59
Ok, so I've discovered edge-on flat booms are definitely worthwhile. . . if the weight can be comparable to other light-weight designs.

I thought it was time to move on from the heavy plywood.

I ordered some 2.6mm G10 a few weeks and ago and found the time.

Here's a refinement of the CyberHex. I've decided to go slightly TCE dirty with 10x10mm booms. A $4.80 750mm stick is just too much to resist.

I haven't forgotten or abandoned vertical plate booms in planform, but I'm saving my carbon fiber sheet for my mini-quad effort in a couple weeks. 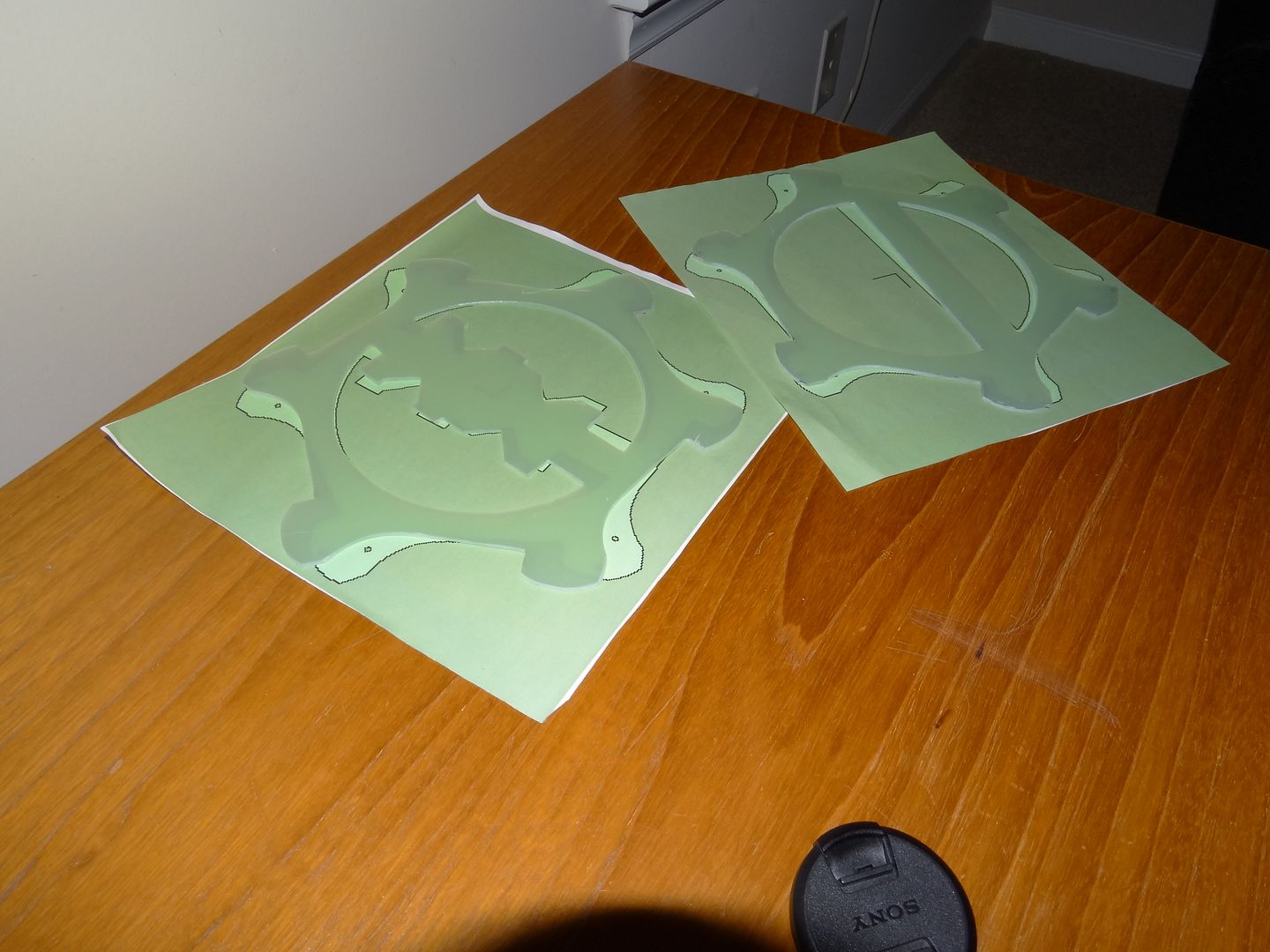 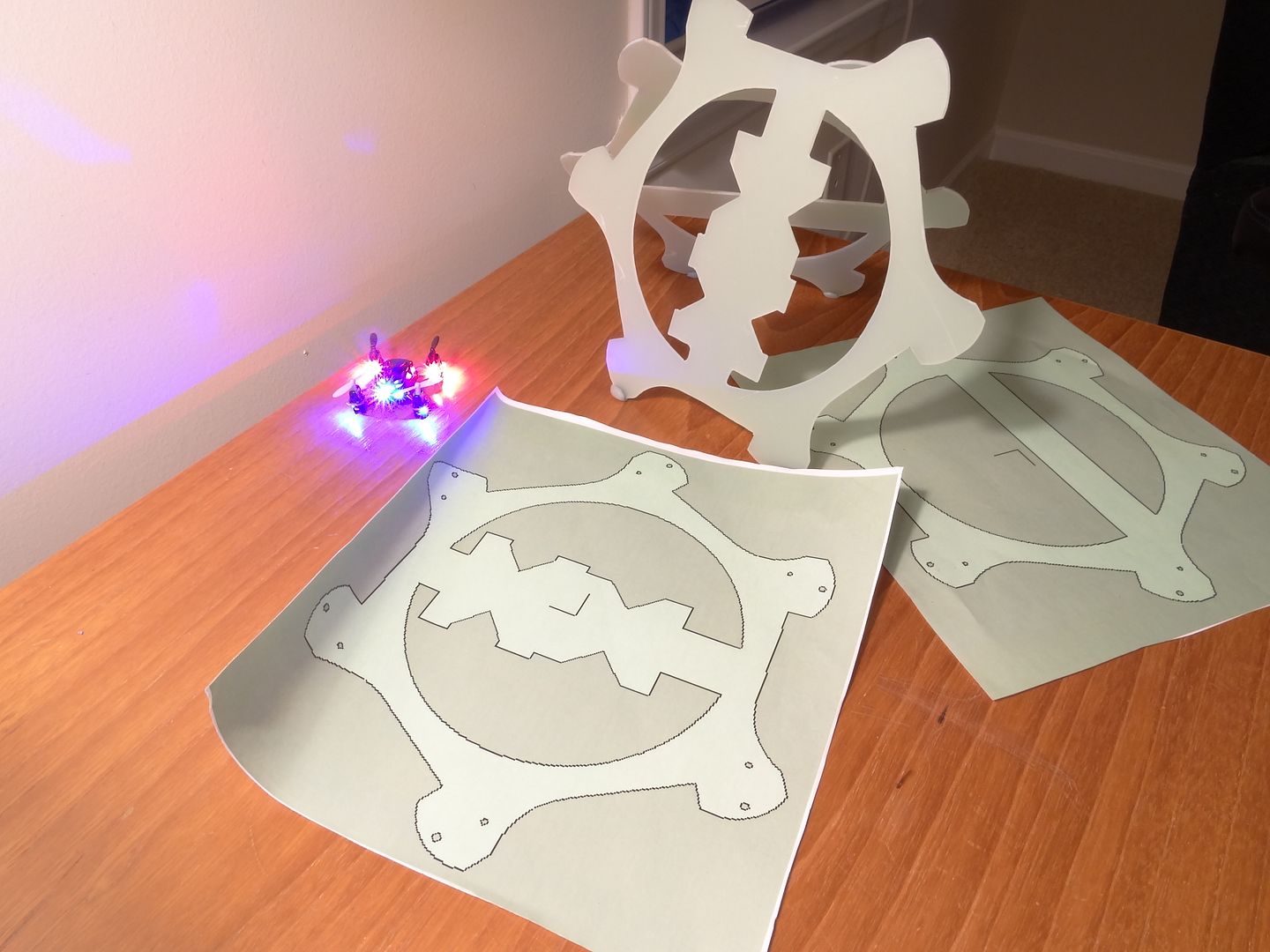 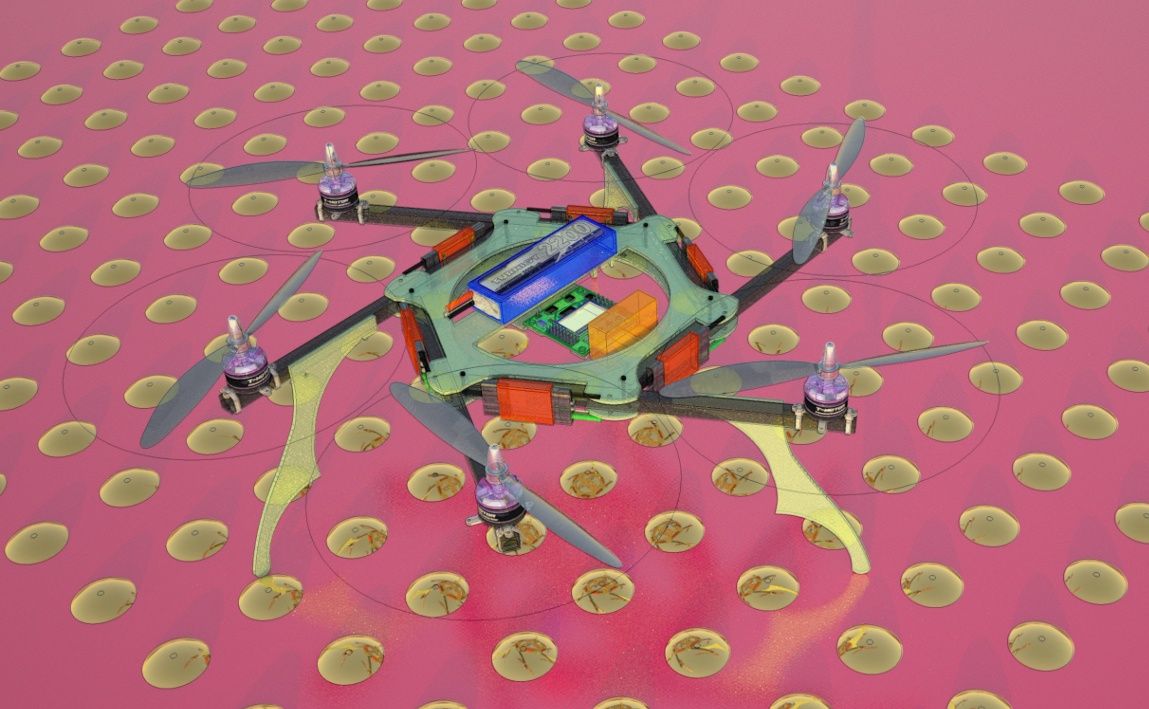 Have about 50mm of extra motor wire length with the new frame using the old harness. Do I want to cut & resolder? Nah I'll just tie it under the motor. 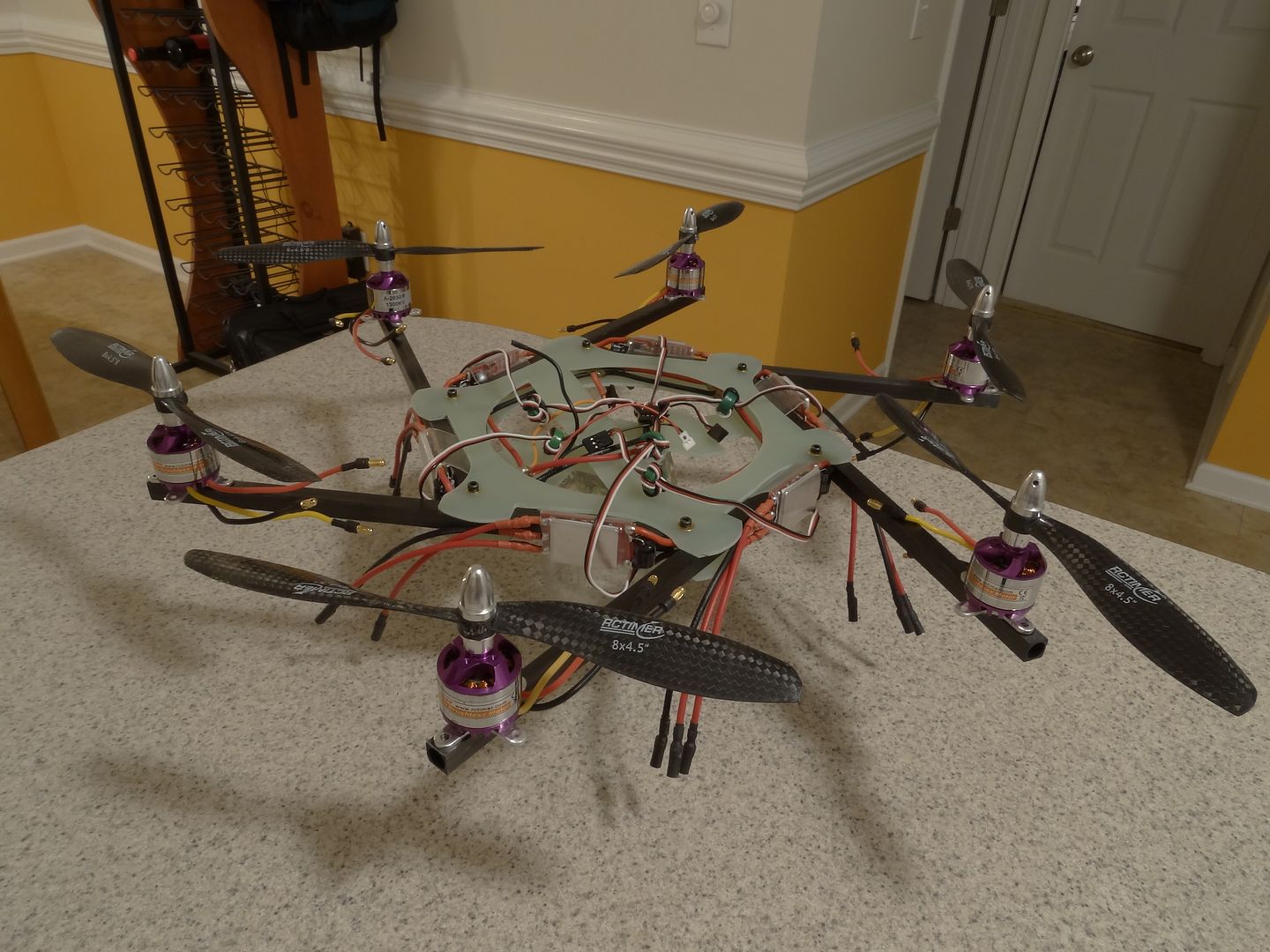