#1
Hi! New member here (long time Flite test viewer).
I recently broke my wing dragon main wing and im now planning on making my own replacement. I really like the foam board scratch builds here on Flight test, so i bought some 3mm foam board. But now I cant really settle on a wing design. Im looking for something really easy to build (first time with foamboard).

or the spitfire wing
http://flitetest.com/articles/ft-spitfire-build

This is the plane i have http://www.nitroplanes.com/at-22023-wing-dragon-sporter-vii-rtf-24g.html

#2
Keep it rectangular for now. The simple soarer wing would probably work, change the dimensions to what the old wing was. Add ailerons. It seems your model had dihedral, but not polyhedral, so that would make it slightly easier as well.

#3
nakcam
It rather depends on how much effort you want to put it.
My first replacement Wing Dragon wing was made in 3mm Depron.
A simple 'plank' built up with ribs and a top and bottom skin.

It had exactly the same span and wing thickness as the original foam one.

It was quite a bit lighter with rather better stream lining with the aileron servos completely buried in the wing.
The improvement in performance was really noticeable.

I still have and fly my Wing Dragon but it is now on a Mk4 tapered wing that has big flaps as well and a V tail!

Thanks for the reply's! quorneng That wing looks really nice! Maby I can print out the "planks" (I have a 3d printer).. The soarer wing looks easier and faster to make tho. And I will probably need another replacement soon lol How is the V tail working for you? What is the benefits of that design?

#5
nakcam
As you can see my Wing Dragon is now heavily modified and stripped to a minimum airframe weight. It is flown as a 'bank and yank' (aileron and elevator) so no rudder. All the 5 servos (2 aileron, 2 flaps, 1 elevator) are 3.7g. Only the battery, ESC and radio are in the fuselage as the elevator servo in buried in the left hand tailplane and works both elevator halves. 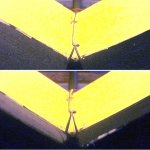 I chose the V tail (after quite a bit of experimenting) to avoid it getting damaged from the rough grass field that I fly from, hence no undercarriage either. In addition a V tail should create a bit less drag as the surfaces are kept out of the fast moving prop slip stream.
Any weight saved does wonders for the performance. Mine now weighs exactly 17oz (482g) with a 1500mAh 3s LiPo.