#1
Plane Print have for sale the print files for a 1.5m span Seagull both as a glider and EDF powered. The majority of it is printed in LW_PLA.
It certainly seems to fly but I was a bit concerned at the all up weight of the EDF version at 560g given it is using just a 40 mm EDF. Some of the EDF versions made ended up at over 600g.
I have to admit it does look very realistic making full use of sweeping shapes possible with printing. It using elevons and a rudder tail so is in effect a flying wing.
In the past I have built a couple of small scale planes using 2mm Depron. Both came out below 250g.
A 600mm span DH Venom with a 40 mm EDF. 202g 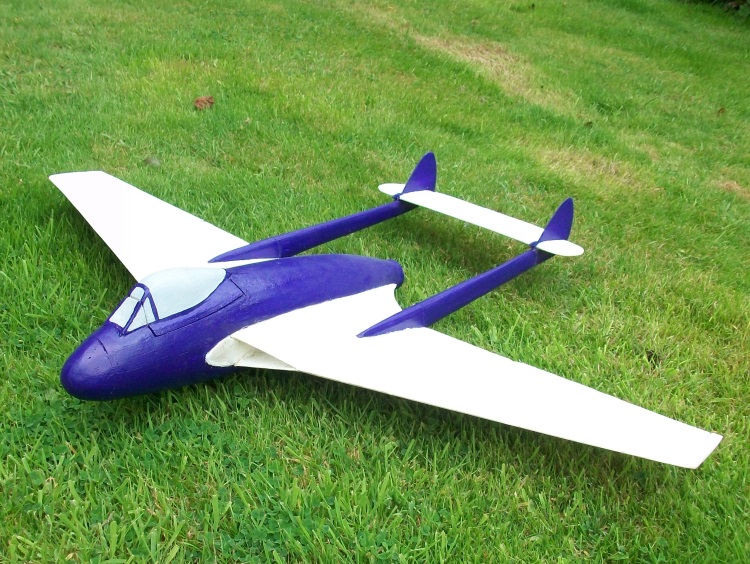 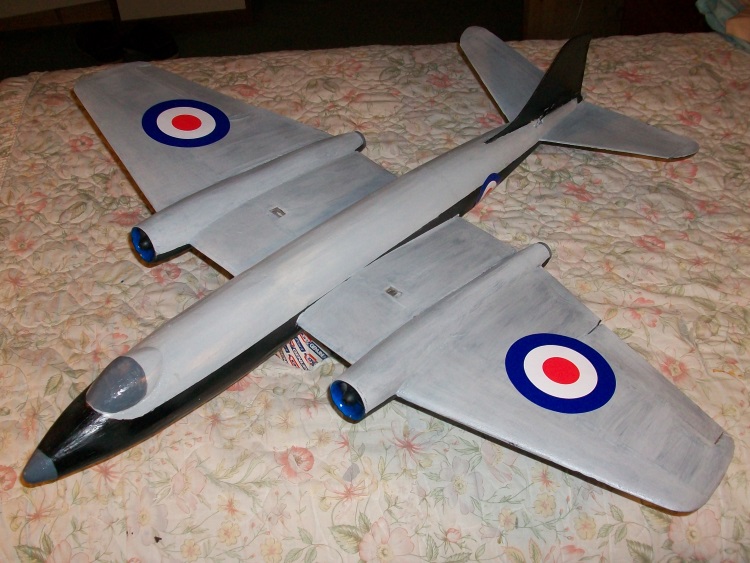 Would it be possible to do the same to make a Seagull?
A 3 view drawing of a possible layout. 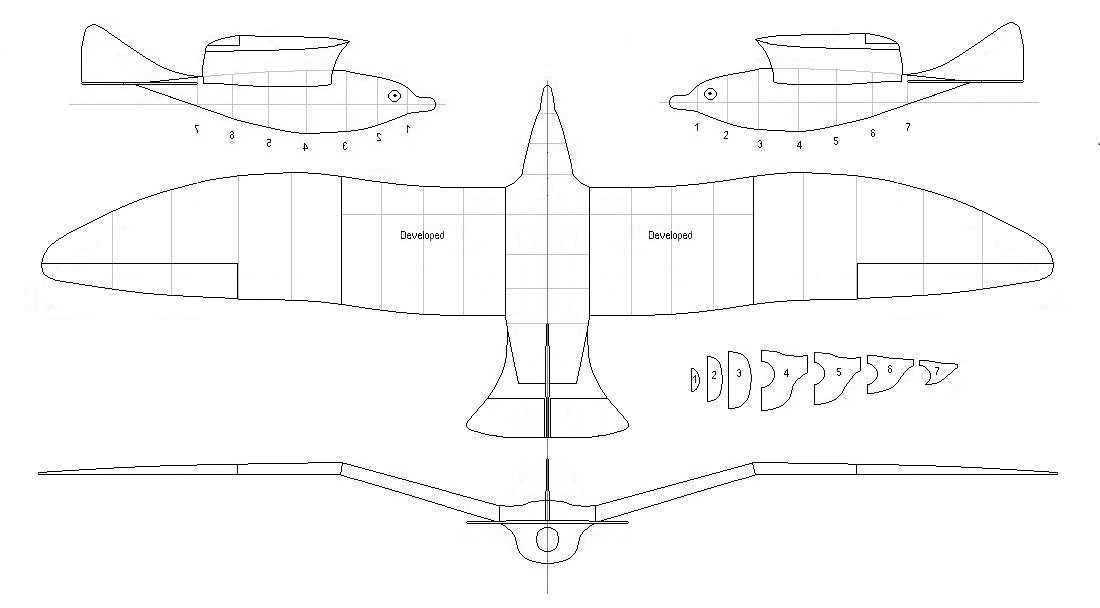 Likely to be a bit smaller than the Plane Print version at only 1.2m span but then it should only be half the weight.
A bit more of an 'aeroplane' than a flying wing with an elevator and differential ailerons but a fixed fin. A configuration I have used in many EDFs although in this case the tail 'volume' will be very limited. The only printed parts would be the EDF inlet and exhaust ducts.
I came across a very nice QX 30 mm EDF that is claimed to deliver over 200g on 3s. 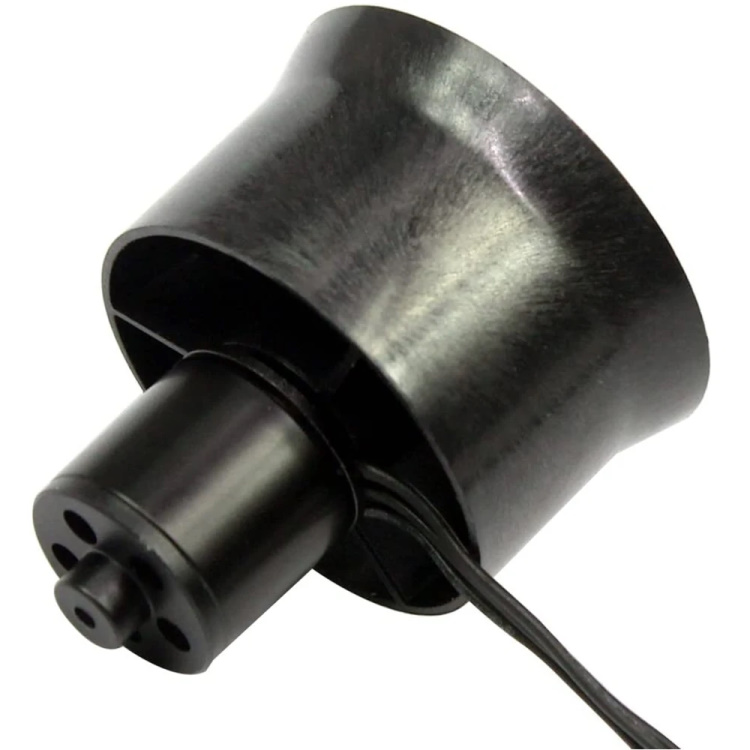 It only weighs 21g so as long as the ducting does not absorb too much thrust and the 250g limit is achieved it should do.
The next task is some 'test' ducts to find out what actually happens.
There is no rush as the UK is moving into winter and this is quite likely to be a 'tricky to fly' lightweight.
Last edited: Sunday at 1:10 PM

#2
The first task is to print a typical inlet and exhaust duct configuration to find out what effect it might have on the EDF's performance.
At these small sizes I though the use of LW-PLA might give a useful weight saving.
My initial though was to mount the EDF close to the exhaust. The longer and bigger inlet duct (area 1.2 the FSA) with a top inlet just ahead of the wing so it would be completely invisible when in the air.
the full duct placed in the approximate position over the body half shell. 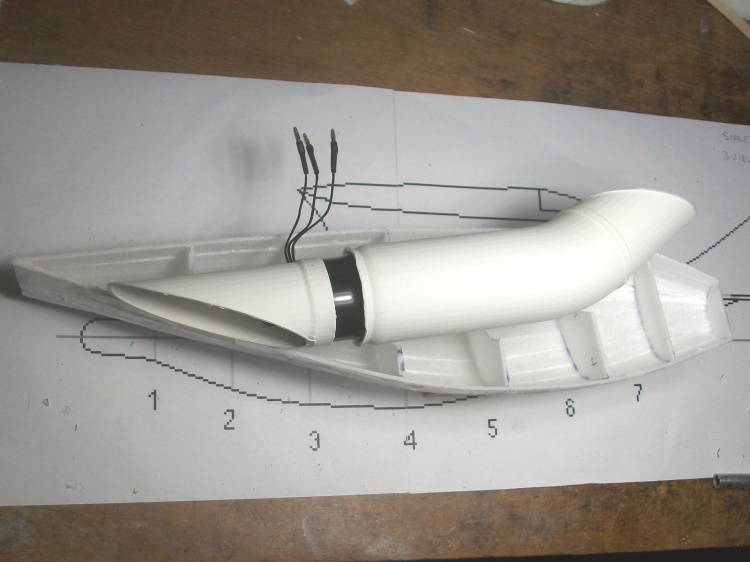 #3
Not very scientific but the 30 mm EDF and duct does seem to work.
My usual test is to see if the EDF can blow the door shut but then it only a 30 mm running on a 3s.

I do have a number of worries about using a 'top' inlet. First the big diameter inlet duct takes up a lot of space just where the battery is likely to need to go. The inlet itself creates a significant proportion of the thrust but with it on the top means it will tend to lift the nose when under power. Finally such an inlet would get virtually no ram pressure benefit from the planes forward motion.
A more conventional bifurcated wing root inlet although more difficult to make might be a better option.
We shall see.
Last edited: Nov 6, 2022

#4
The first half body shell modified to have a wing root inlet. 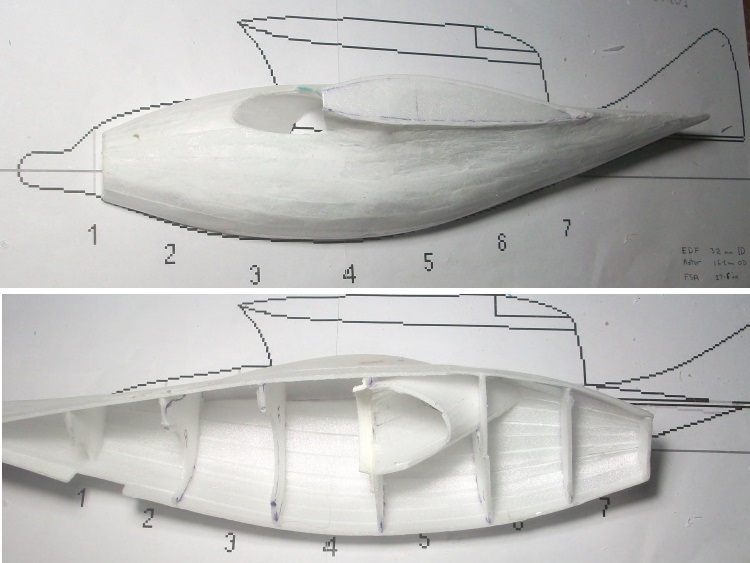 The actual duct may be less efficient than the simple top view tube but it should make up it by ram air pressure when in flight.
The EDF is moved forward to match the Depron planked inlet 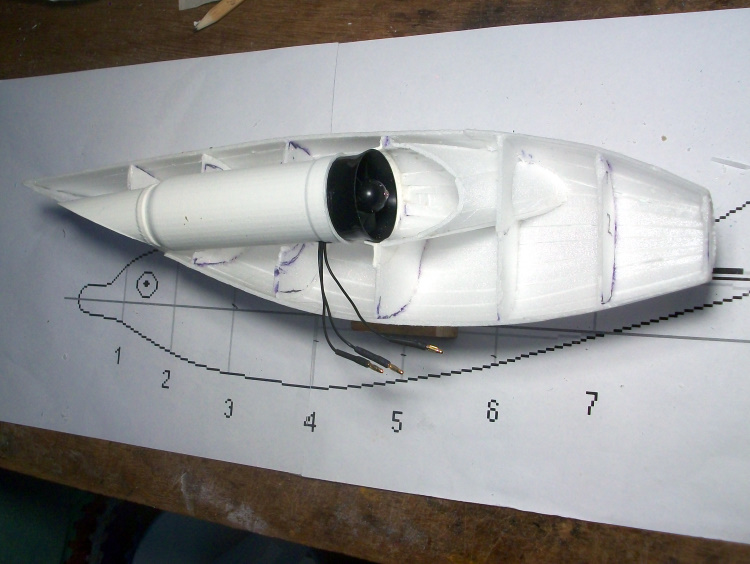 It looks a better arrangement but whether it will fly is another question.
Last edited: Nov 16, 2022

#5
The above picture had a 15% restriction in the exhaust duct to achieve nearer to the FSA. This proved to have no thrust benefit whatsoever so a simple parallel duct was substituted.
With the limited space available so thought was given to the layout of the 'electrics' 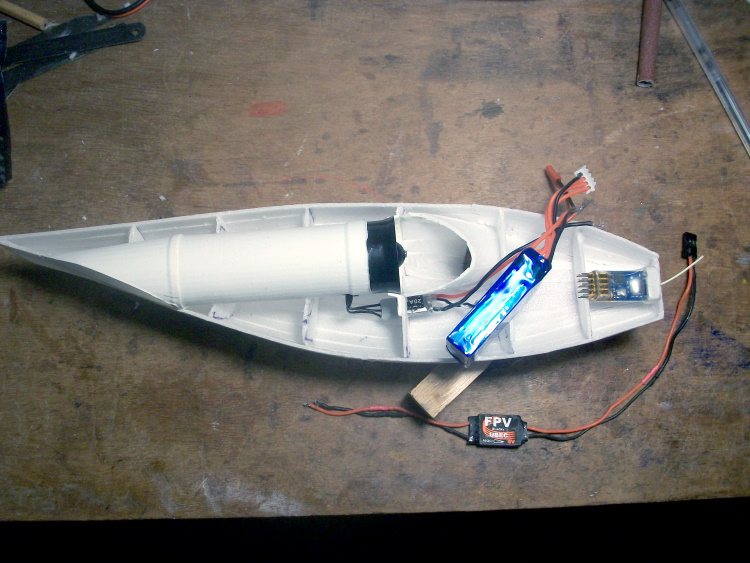 The 20A OPTO ESC is small and light enough but it does require a separate UBEC so the total weight saving is limited although installing two small items is easier than a bigger one piece ESC and BEC.
The intended LiPo is a 450 mAh 3s.
It is all quite a tight fit as well as having to guess where the CofG might need to be.
Made a start on the wings.
Each wing rib is printed in LW-PLA. It is about 1/2 the weight of using normal PLA 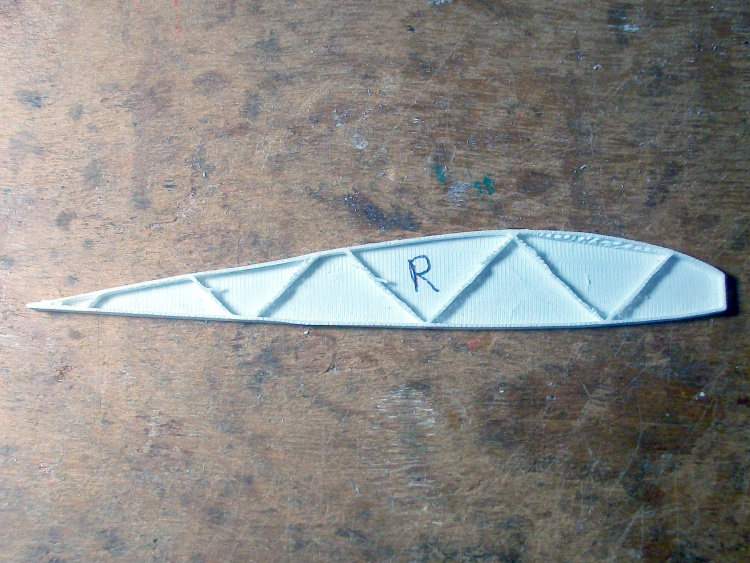 A single surface with a 3mm 'truss' bracing.
The full set of ribs. 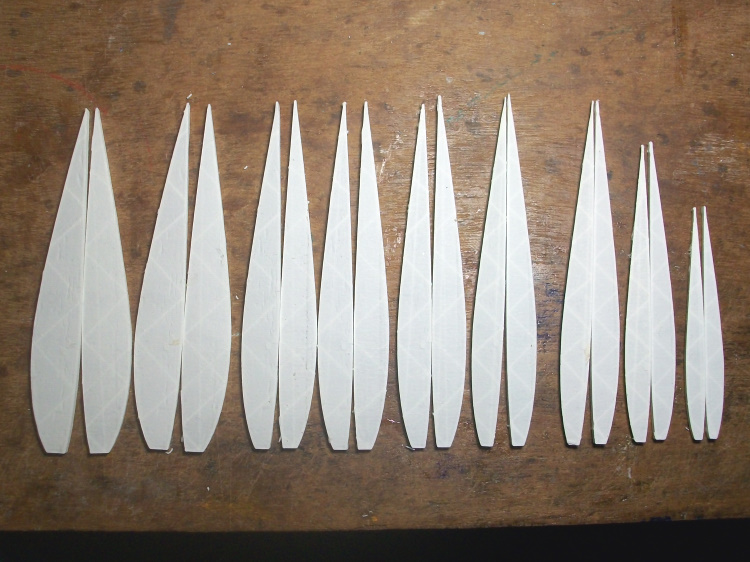 There is only one design of rib as all the smaller ones were created ones using CURA's scaling feature.
Next is to cut out the top and bottom Depron skins.

#7
As everything is going to be built it (except the LiPo) to the body it means all the electrics and servo have to be installed before the two halves are glued together. This means the wings have to be built and completed and the servo cable run through them before they are glued onto each body half.
The wing is built in 4 separate pieces.

A 2mm Depron lower skin, the ribs glued on followed by the top skin. Each skin is manually manipulated to give close to the correct shape then clamped & pinned in position whilst the glue dries.
The 'joining' ribs have been inclined at the appropriate angles to give the gull wing.
Only held together with tape at this point just to get an idea of what it looks like. 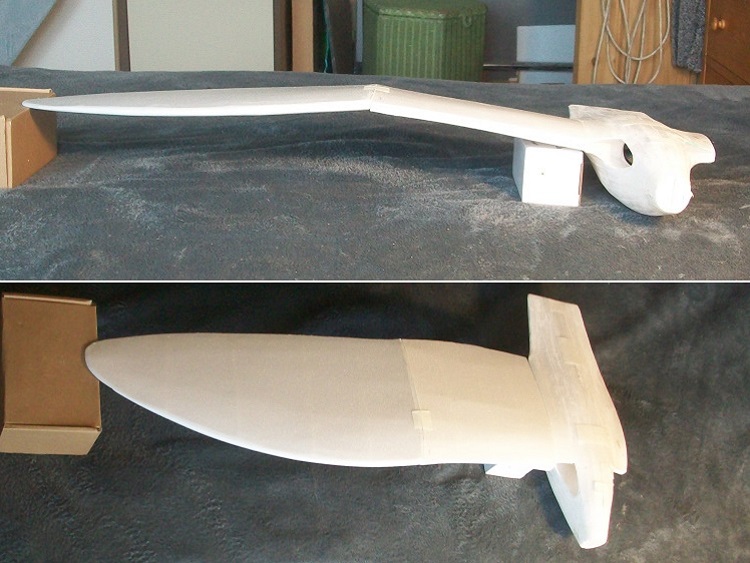 Next the aileron is cut out and the servo is installed through the lower skin and its extended wire run through the wing and into the body. Only then can it be all glued together. 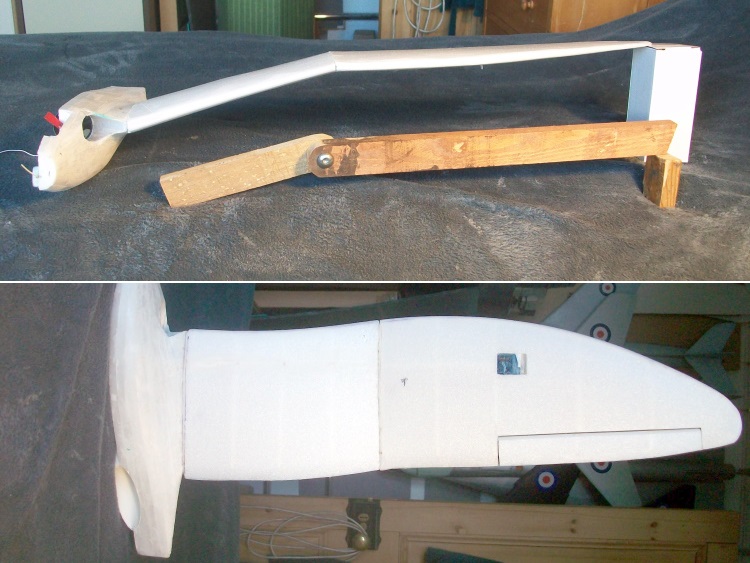 The crude jig is to ensure the other wing ends up with similar gull angles!
There is no reinforcement. The wing skin providing all the strength and stiffness. The wing joints are simply skin to skin butt joints. The Technicqll foam safe glue seeps into the Depron and sets rock hard after 24 hours. The joint is as strong as the foam, well nearly.
The half wing, including the servo weighs just 28 g.
Happy it can all be put together its on to the other side.

#8
The wing glued but the body halves only taped together but it does give an idea of how it will look. 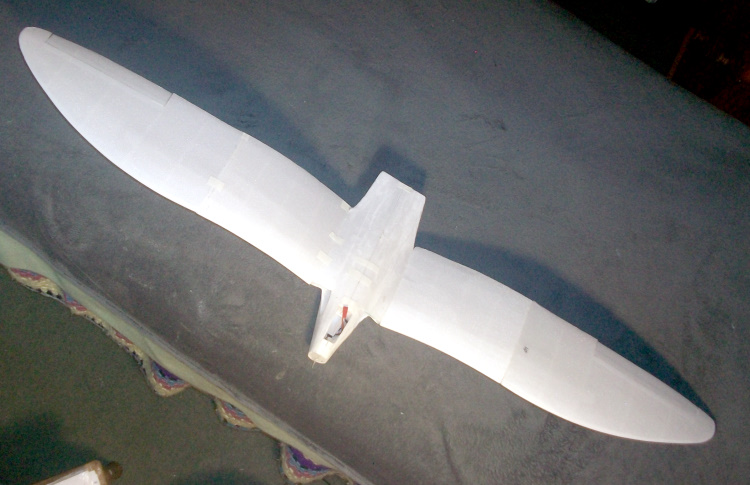 Next is to complete and test all the "electrics" before it can be finally glued together.
It looks like it will be under 250 g.
O

#9
Very cool. The level of craftsmanship around here is pretty amazing. 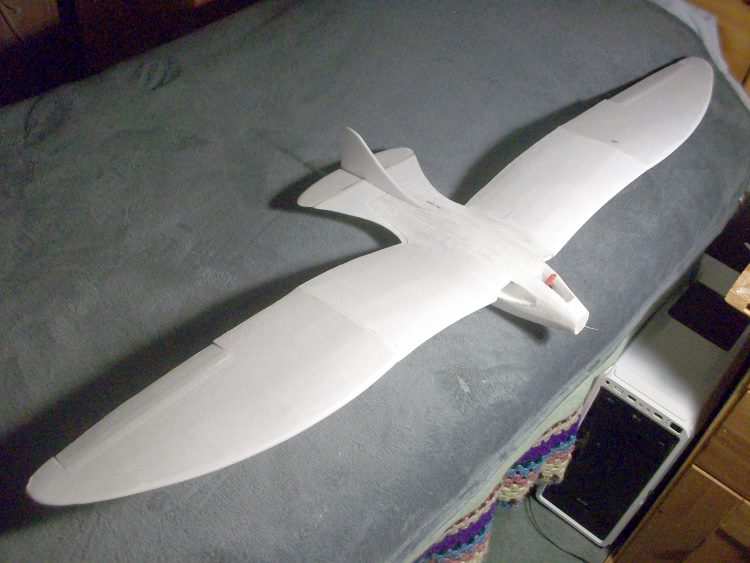 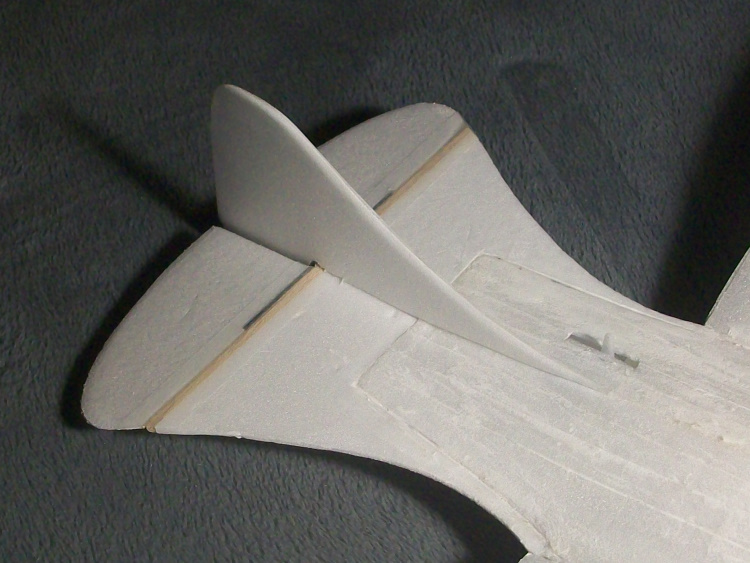 The elevator servo is sandwiched between the tailpipe and the top skin.
A hollow glass fibre tube joins the elevator halves.
Still the nose/beak to do and the servo link rods to be added.
Best estimate is now around 200g ready to go.

#11
It is now more or less complete with a very light wash of thinned water based paint, Dove grey wing top, white elsewhere. 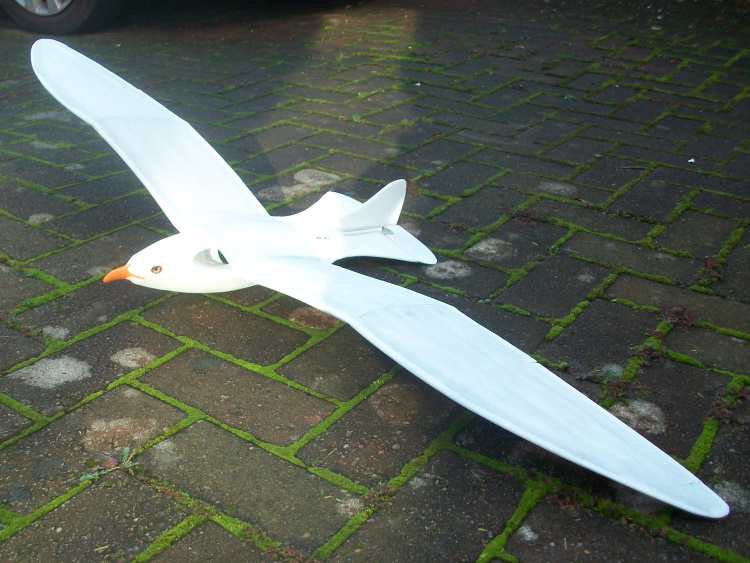 Just the black wing tips to do.
A proper Seagull 'hooked' beak and that is a picture of an seagull's left eye! 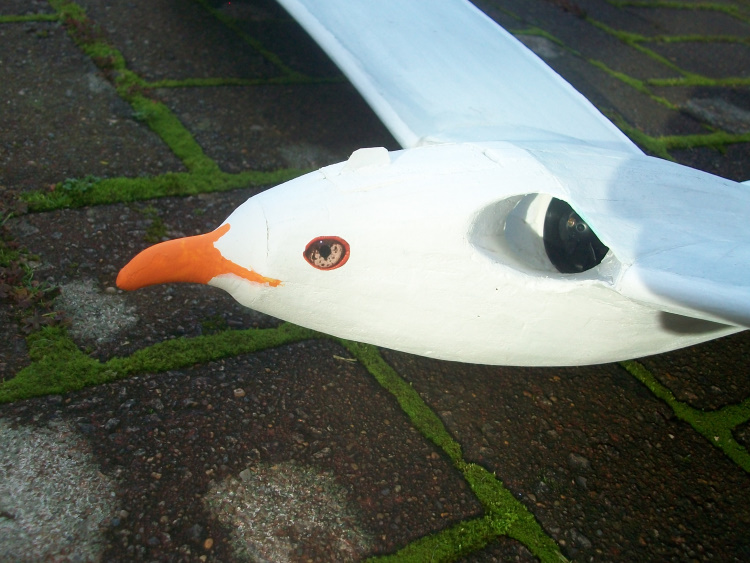 With a reversed one on the other side.
1210 mm span. It weighs 181 g ready to go but not flown yet. It will heed some seriously calm weather.

#12
quorneng said:
It is now more or less complete with a very light wash of thinned water based paint, Dove grey wing top, white elsewhere.
View attachment 232616
Just the black wing tips to do.
A proper Seagull 'hooked' beak and that is a picture of an seagull's left eye!
View attachment 232617
With a reversed one on the other side.
1210 mm span. It weighs 181 g ready to go but not flown yet. It will heed some seriously calm weather.
Click to expand...
It's a beauty, can't wait to see video of flight!
You must log in or register to reply here.
Share: Facebook Twitter Google+ Reddit Pinterest Tumblr WhatsApp Email Link
Menu
Log in
Register