FT STYLE to the EASY way:
Build a Simple soarer, but change the outer wing shape and empennage to match the Bird of Time.

History: Last Summer at FFE 2018 I brought FT-Simple Soarer (SS) Plans to build one and enjoy at the festival. I was excited to use the FT-DTFB then I would have a SS I could fly in all weather. as I was starting I thought about how much I loved the Bird of Time (BOT) from the episode FT/Josh Bixler did long ago. I had just been staring at them and disappointed there were no Kits available. The Idea Struck me - just change the wing shape and Fuse a bit and make one of you own off the SS. So I did!
Build Method: Build a Simple soarer, but change the outer wing shape and empennage to match the Bird of Time. I curve the tail boom and tucked the servos where the 18" landscaping wire pushrods could reach. Lastly I build a Power pod shaped like a glider pod. pulled paper off the bottoms to curve it to the lower profile. - Success! I then Taped the wing and made it beautiful, then had every FT personality I ran into sign it. It was the one plane I have never managed to bust up beyond all recognition.
In-situ:

Experience Tip: Don't choose to colors have the same hue. As they recede into the sky they grey out to the same color. 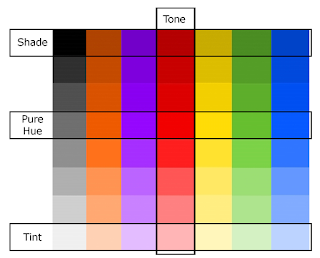 Results:
It flies manageably. It has yet to fly like I want, but there are two things I love about it. It's beautiful shape, and the outside pod gives more room to place the battery and ESC.
SS-BOT Plans:
Reserved

FoamyDM style Build
This "stupid" plane has been on my mind since... I searched and found nothing in the Scratch builders thread here where someone attempted a FT style or DTFB build. That's what this thread is really about. so Here I go.

Mission Statement: Using build techniques I have learned this past year I will attempt to build a DTFB replica that is as simple to build as any FT build. I want to build it with Windows through the surfaces. to save weight and the skin will be Dollar tree cellophane and wrapping paper.

Limitations: - Use accessible 6mm Carbon Arrow shafts for spar. the rest - Foam.
The original build is 1.16kg / 41 oz. RTF, according to the article. As the model will be close to 6 full sheets I suspect it will be close to the same.
I'm starting with the set of information located at outerzone.co.uk. if you want to build a balsa scratch build for stick you have... you can stop reading.

Project start -
Plans: Every repeatable project starts with plans.
This is my current progress: 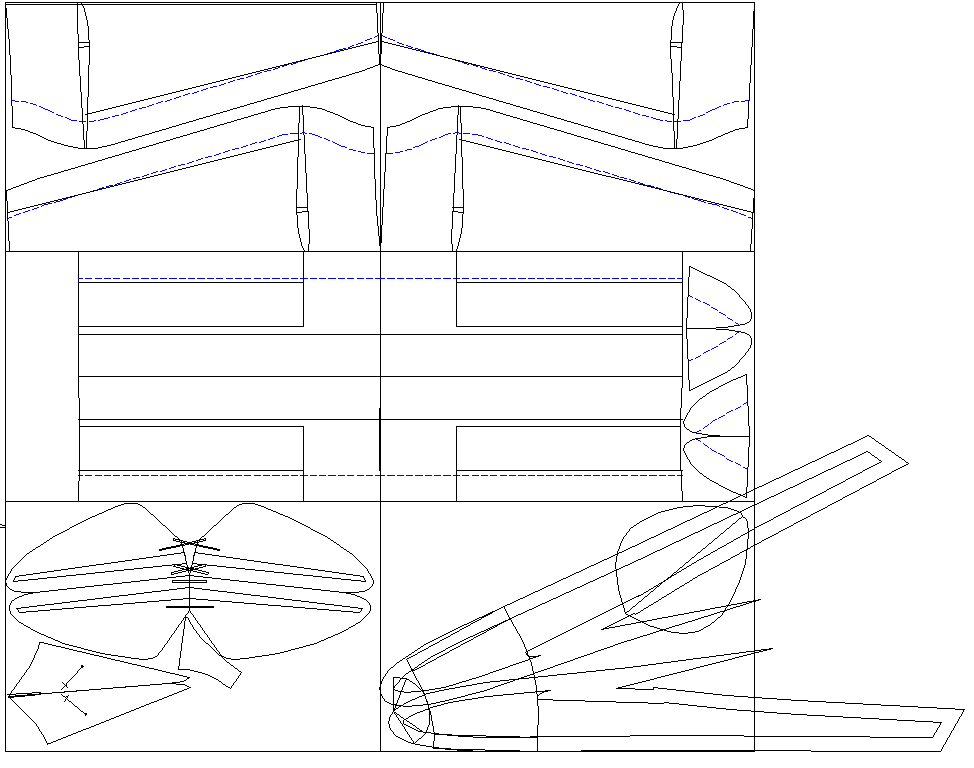 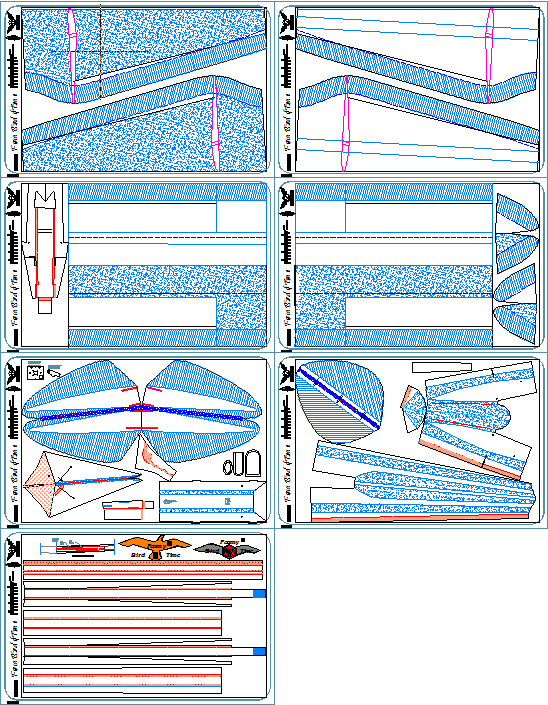 This is looking to be 6 1/2 sheets.
Almost a complete seven
FULL-Sized PLAN Set
This Plan doesn't include an estimated CG of 4" behind wing Leading Edge.

Maiden Video
Listen after the launches at 34s and 3:50m.
Prior repairs from first maiden:
This is after I reinforced the sides with Carbon fiber tubes. And found suitable nose weight. Over 1 lb! (Added to the 5000mah 3S bat. Weight.)
While not the smoothest starts, it shows this foam bird behaves just like the balsa. A gentle responsive soaring glider. Build your own! Now you can.

Mentor
#2
Cool project! And very good observation on the color tone visibility problem. I can confirm with personal experience that while it looks cool to have light and dark versions of the same color in the scheme, when it's up in the air it doesn't help orientation at all 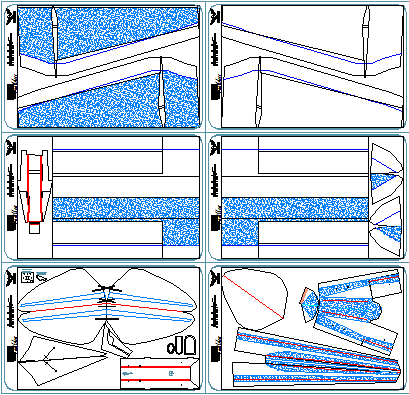 One thing I can say for sure on color schemes is using solid black on the top of the wing in a pattern along with a transparent color doesn't help a darn bit. When viewed from the bottom the black still blocks the light! I learned that the hard way on my EVA Sport!
G

#5
Oh boy. Itching to get the download. Thanks so far!

#6
If you want to alpha build you are welcome to join me. Last thing to work out is the spar details, then I'll pdf It.

#7
I have added a link to the Alpha Plan set if you wish to join in an curse me as you do.
You should be experienced with FT builds and understand the @nerdnic style build process.
G

#8
Thank you. Will build a wing next week.

#9
I finally mounted the plans. And am ready for cutting.

#10
grasskisser said:
Thank you. Will build a wing next week.
Click to expand...
Let me know how it goes... And questions. 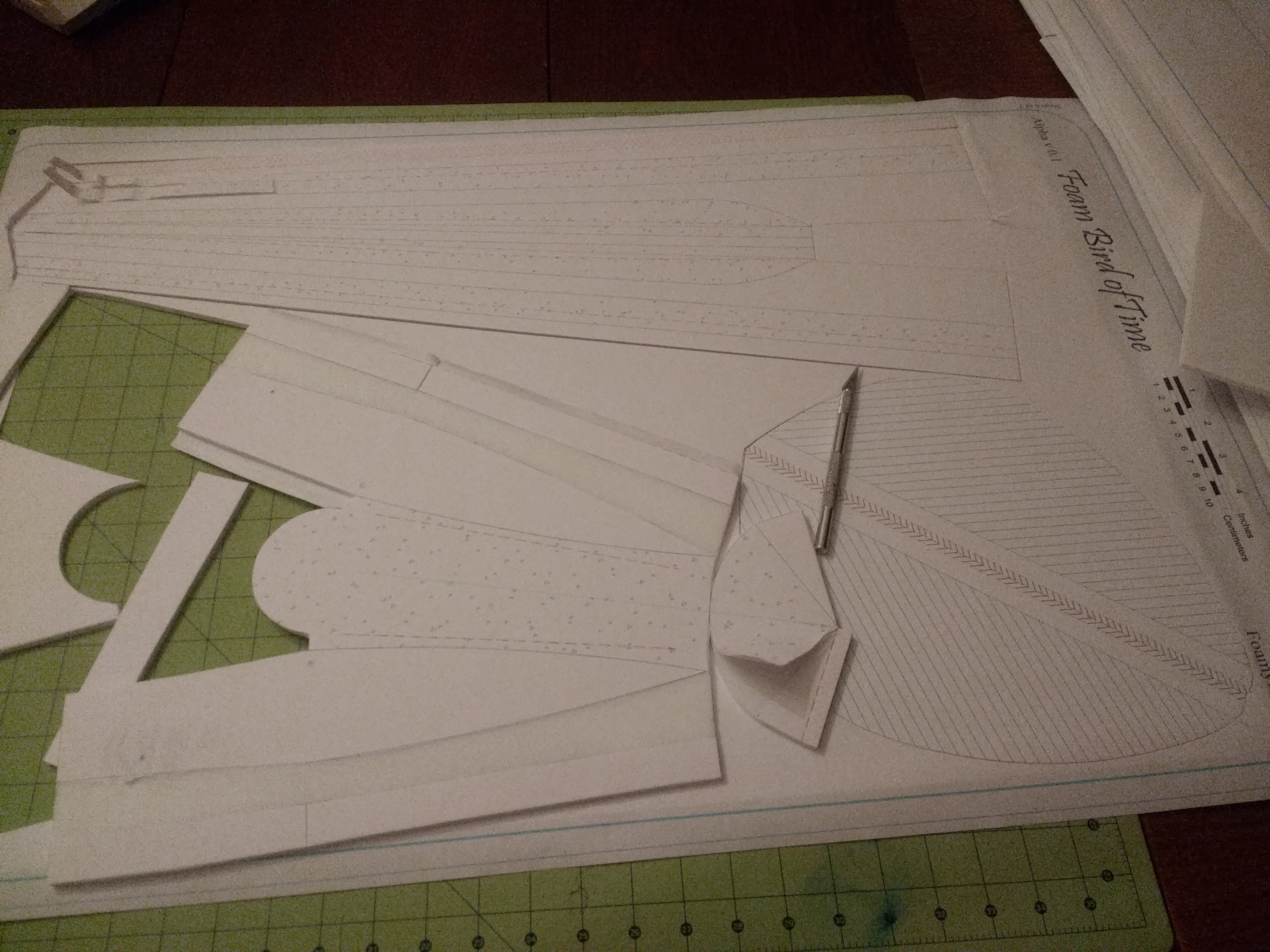 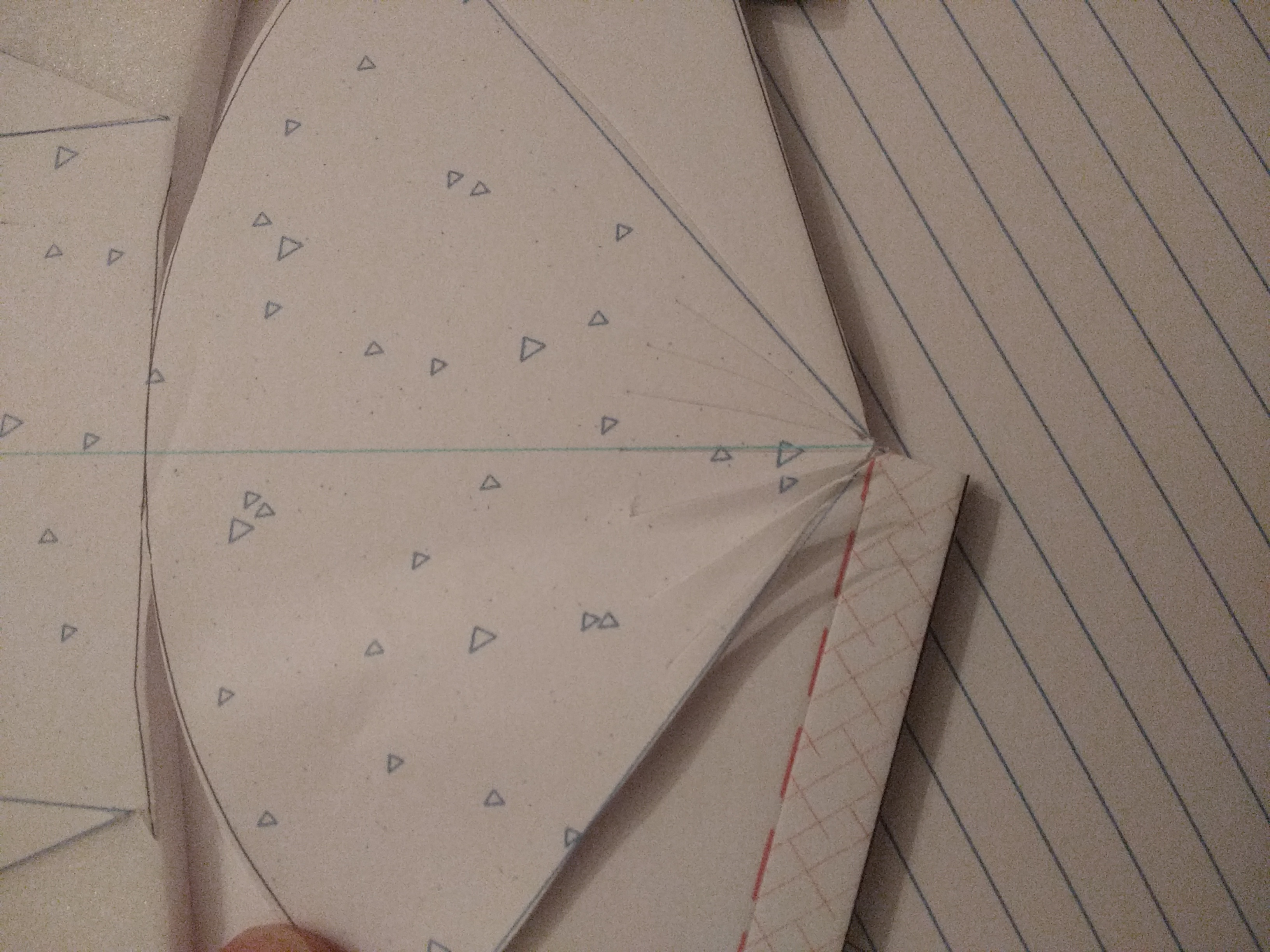 I'm excited!
The plan is to test the fuse first.

#12
I continued my BoT building. mostly it was taping the foam. Last night I decided on Color Scheme. Big thanks to @TexMechsRobot for sharing his build information. His is beautiful.
Part of what draws me to the BoT is the orange creamsicle look.

I will be adding red to the the ends. Wing tips, rudder, and nose tip.
but for now, from the top, I am making it like you see. orange horiz. stab and black underside. except one wing underside will have nose to tip Black and white stripes 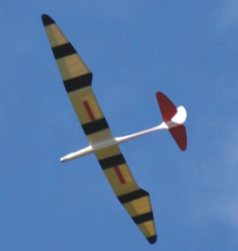 I think if I rebuild it (when I do) I will need to do something more interesting like these by making oval or circular holes in the wing surfaces. 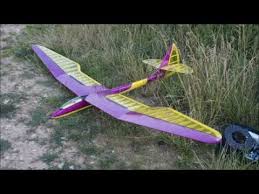 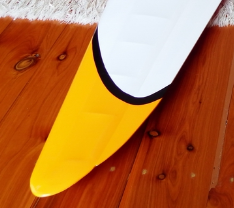 I have red Celofane that last plane is an easy option.

There are a number of great build pictures at this BoT Mod Site. After looking at his Spoiler I bet I could fashion a DTFB version fairly easy. As I am new-ish to soaring, I'm not sure what the guide lines of sizing are. (yet) but the pic here gives me a good base. Words of wisdom anyone?

I test rolled up the nose/front have of the fuse and I like what I see. pics to follow

#14
Spent some time yesterday and had some good success. The Horiz Stab and rudder are done, I have to work on the vert. Stab setup. I cut the arm for the elevator this morning.
I then went ahead and started rolling the fuse up. starting with the nose. The tape covering made a big difference. but it was a bear to do. I wonder if splitting it into an upper and lower half with key ways might be smarter, however, it did match well, and the overall shape is pleasing. I worry a bit about the rigidity or lack of it in the boom over the long haul. but I have to start somewhere. Also I tested the standard pod and i doesn't quite fit...

Here are some of the progress pics:
Parts

This is how the Tails pieces fit. Not exactly intuitive... (and this 10% cut line for the iron flattening isn't correct on the Alpha plans)

Fuselage picture
I started with the Nose of the Fuse

Post curling of the fuse... you will see a GREAT many stress marks of me man-handling this into shape. I think I will Acquiesce, those exterior formers that @DamoRC uses would be a giant Boone for this build. Note, the plans call for a 50" cut at each corner line of the fuse. If found that it made the curling harder, or at least harder to make smooth. Also it is important for me to mark the section stiffener locations. on the plans... for scoring and reference. I eyeballed them and adjusted the tail one a number of times.

Here's the nose. I think there is enough space inside for the standard B/C-pack Pod.. Rrr, unmgh. Crap.. a bit too small. two thoughts. 1. a custom pod. (rounded corners.) or a shallower one. Shollower by what looks to be 1 FB Thickness. wait, 3. get screwdriver and my plumbers helper, and by golly, we'll SHOVE it IN!@The corners show it most.

All that said... and shown, I'm please with the look and rigidity of the fuse so far. I will be adding skewers to the tail connectors.
Last edited: Jun 26, 2019

#16
Thank you @Wildthing
BTW - the yellow masking tape on the Fuse is to hold it in place while the glue cools.

Bird of Time builders: How did you set yours up? Motorized? Ailerons? Spoilers? Flaps? Landing wheel? Did you Mix Elevator your rudder?
@TexMechsRobot - did you put spoilers in if you did, are you glad you did?

#17
I did put spoilers in mine. You can see the placement in the Flickr album I sent you. For mixing, I set the throttle to a switch combination. When two designated switches are both flipped, the motor goes to 100% throttle. One of those switches is a three-way that is also programmed to flight modes: launch, soar, and land. If the switch is on launch, the motor is armed and can be turned on or off with another two-way switch and the spoilers are disarmed. If the three-way is in soar, the spoilers and motor are disarmed. If the three-way is in land, the motor is disarmed and the spoilers are armed. I then set the spoilers to the throttle stick so that I could have fine control over their deployment.

#18
Thank you sooooo much for that info.

#19
Looking forward to seeing this at FliteFest!

#20
I finished the tail mechanism. But failed to take pictures. 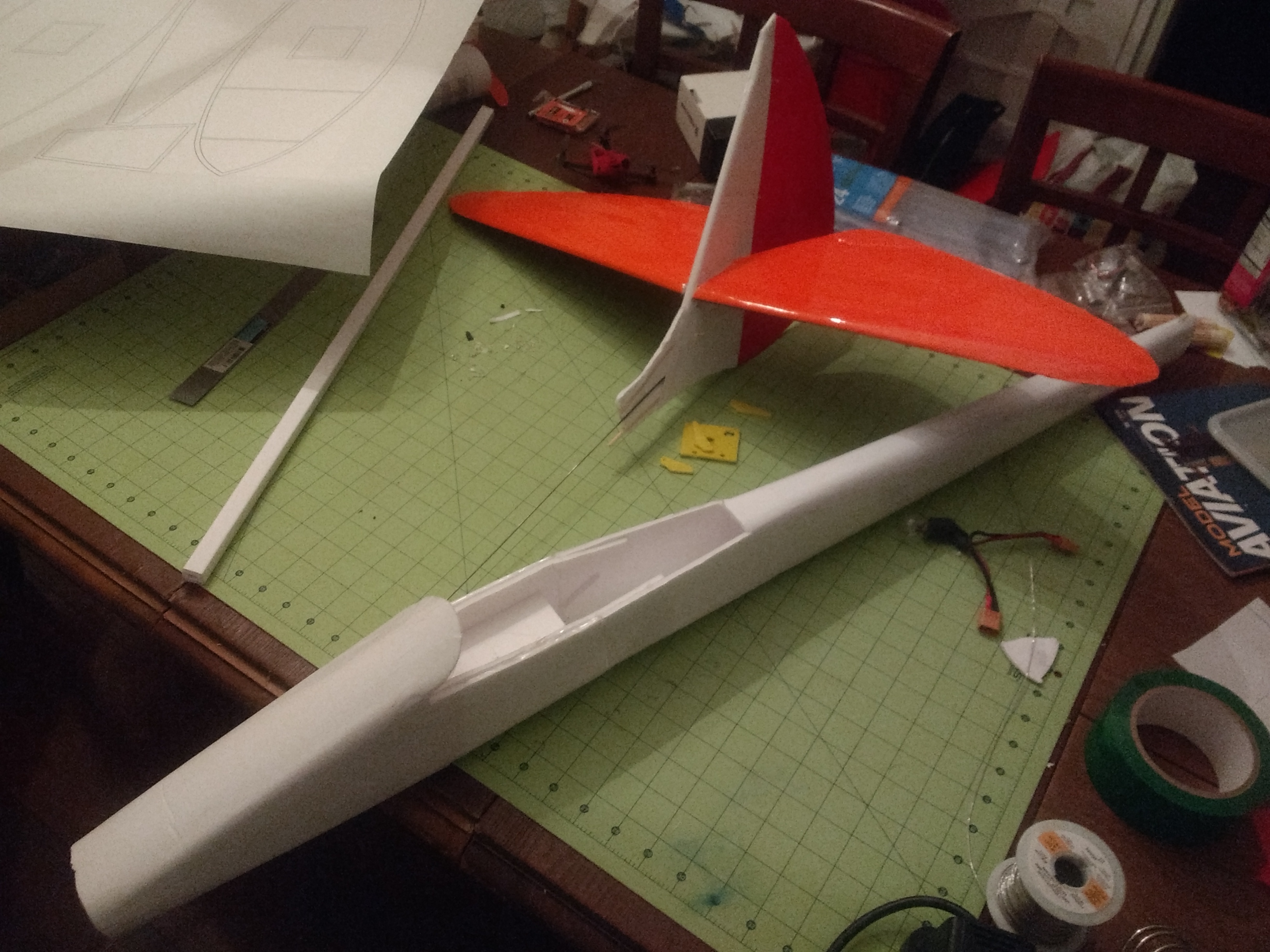