#1
Howdy y'all! Last week I became interested in RC planes (I have a deep interest in Rocketry and love flying planes in Kerbal) and ordered a RadioLink T8FB transmitter, 2200 KV motor, ESC, pair of servos, and 3000 mAh battery. I stopped by dollar store for some Adam's foam board and duct tape.
I learned some basics of flight such as CG, wing loading, tail volume coefficients, etc. and watched some videos on YouTube about building foamies.
Anyway, this is to say that less than $100, most of which went to the transmitter, and a couple hours of research led to me building something that I can fly through the air with my brain!
Just some quick specs, I installed a pull-pull ailerons system and basic elevator mechanism (clothes hanger wire works so well as push rod). The pull-pull system used braided 85lb fishing lead as well as some washers and random hardware. All of my control horns were popsicle sticks with holes drilled in them. I didn't include a rudder as I only had two servos. That's also why I opted for the pull-pull ailerons.
I took it out for the maiden flight around 6 o'clock today. There was a moderate wind, but I was getting antsy after a week of waiting and working (a short time for sure, but I've never flown something!)
I had to hand launch since it has no wheels, but watched some tips from Flite Test on YT.
For my first attempt I didn't have enough throttle to start, so the plane glided for a few seconds and veered down onto some train tracks besides the park.
The second attempt I knew I needed more throttle and had to focus on gaining altitude. I launched it and it was flying beautifully straight!! I hit up on the elevator and the baby started climbing, fast!! It hit vertical and kept going. Before I knew it, a full loop had been done and I managed to get the plane flying straight again. I hadn't gained enough height now, though, and the plane was approaching some woods. To avoid a collision I attempted turning and the right wing collided with the ground, breaking near the fuselage.
I took the plane home and realized I was able to fix it up with some duct tape. The pull-pull system even survived totally!

Below are some pictures, post crash. I'm ready to fly this thing until it's irreparably smashed.
I mean how great is it to get to learn to fly with 5 dollars of destructible equipment in the air with 3 hours of build time 😎😎
Thanks for reading! I hope to learn and build a lot more! 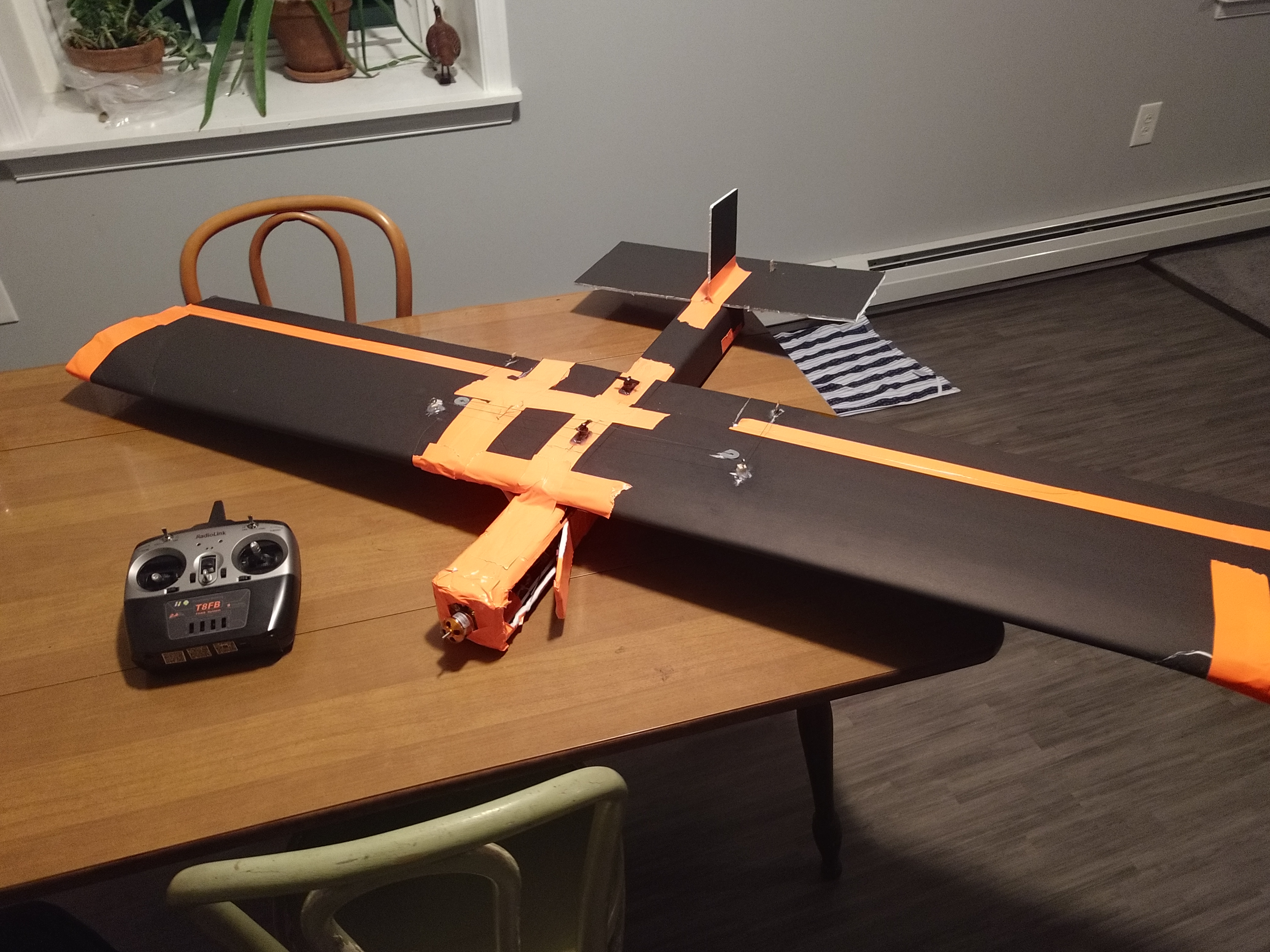 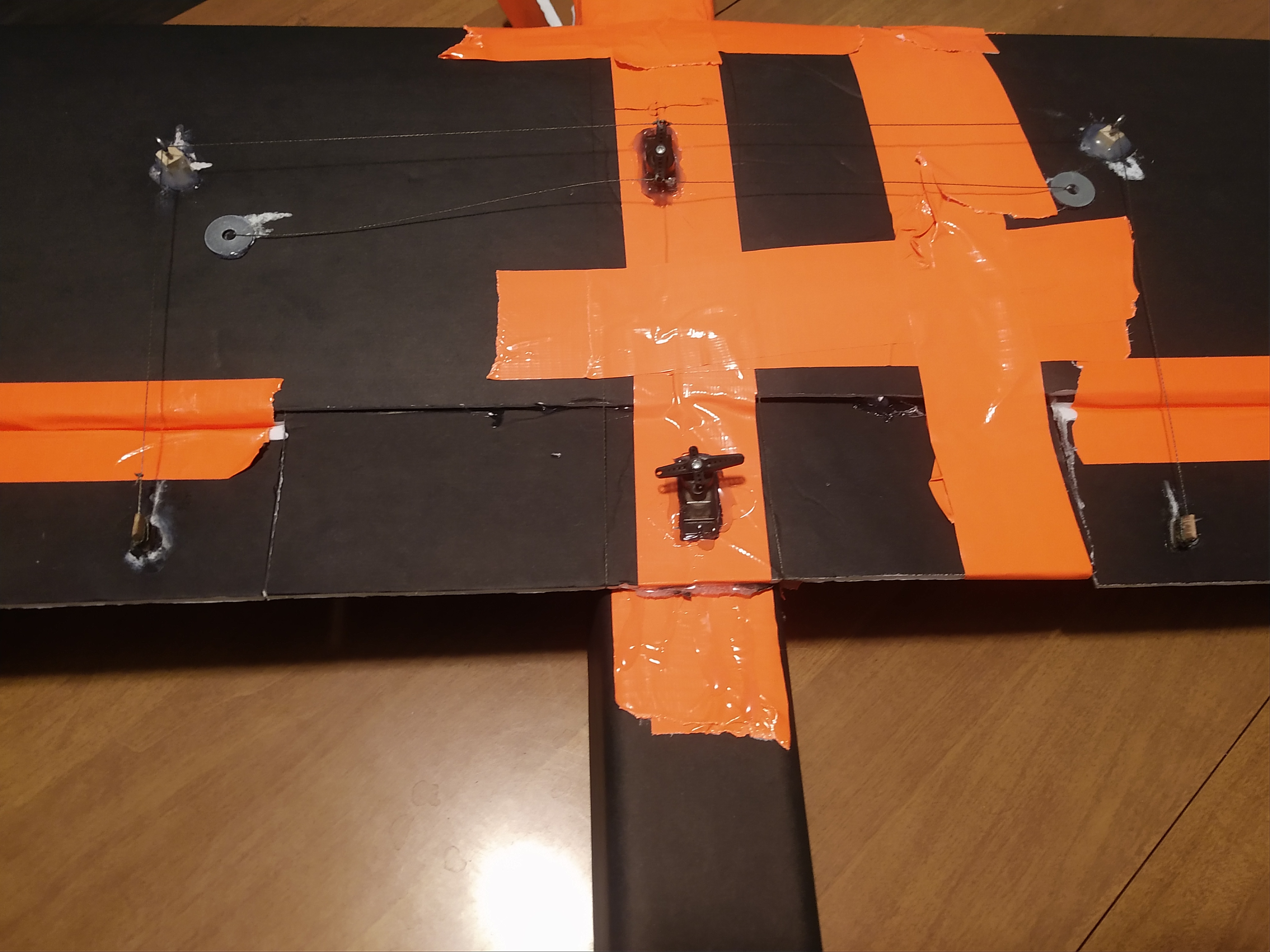 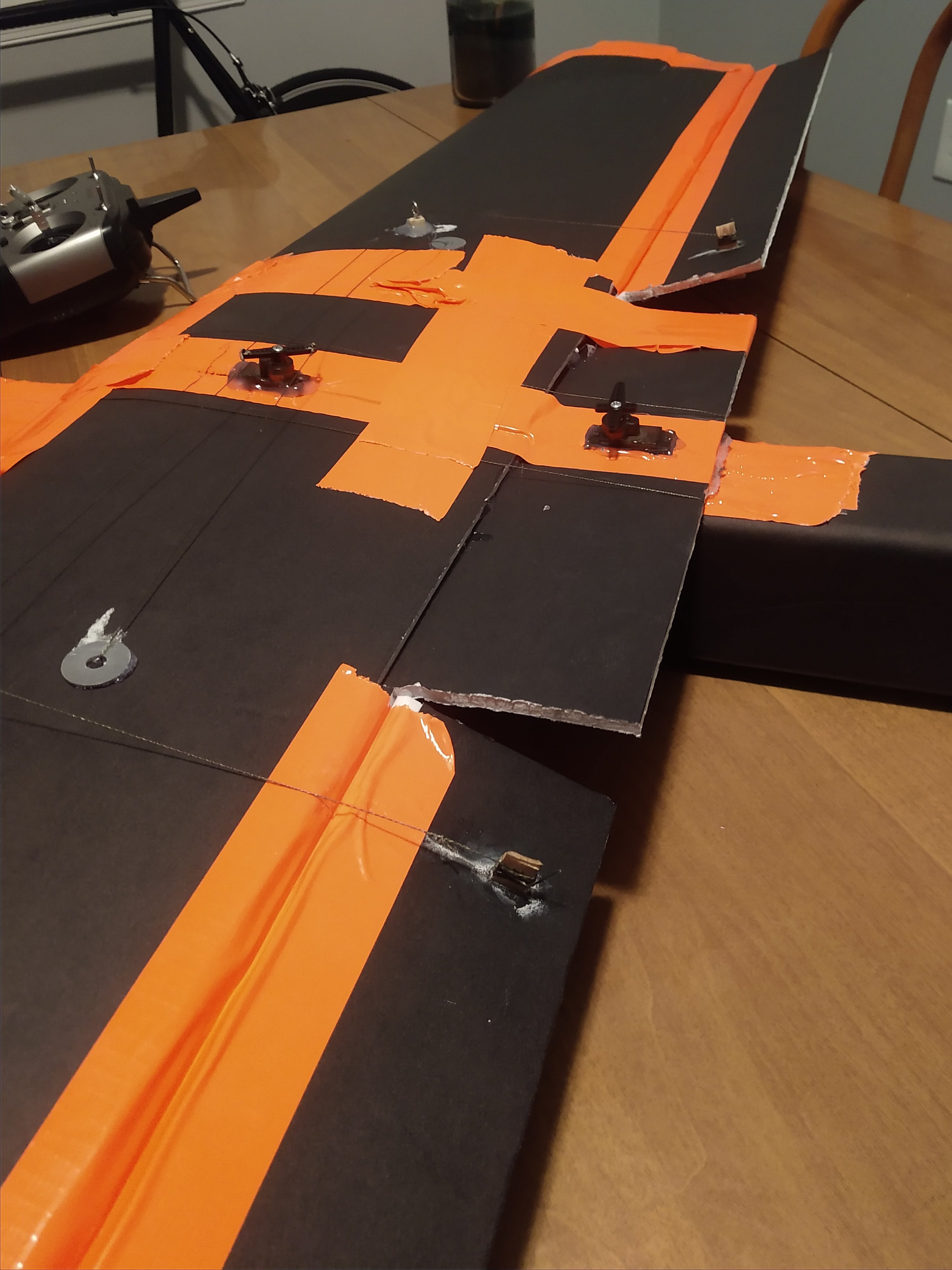 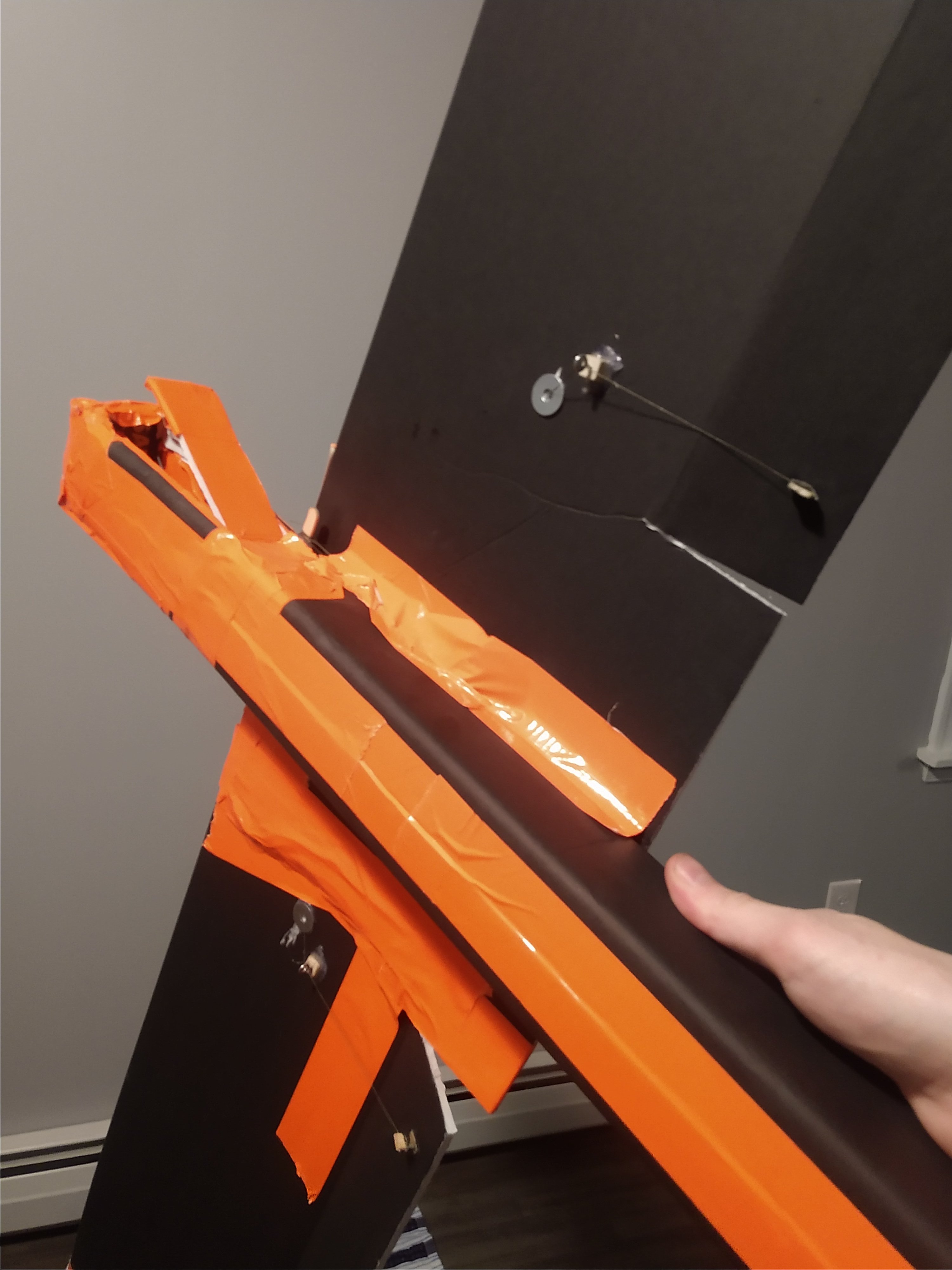 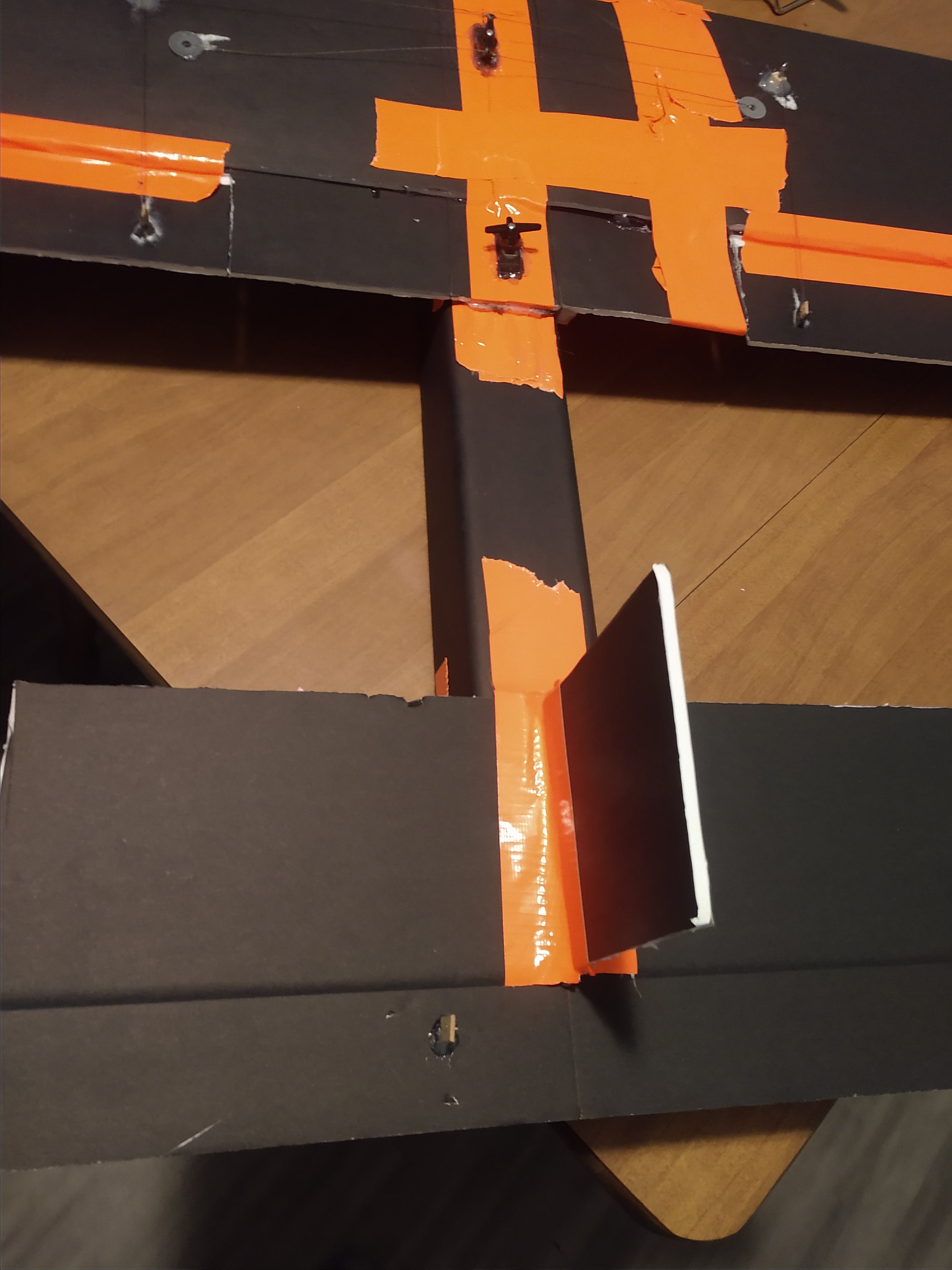 #2
Edit: I want to practice on my transmitter a bit so I downloaded Clearview and made a Jerry rigged 3.5mm jack wire like in this video! Super handy for anybody wanting some spontaneous virtual flying practice and super easy to set-up.

FYI I just soldered the wires to the two pin connector, didn't use the fancy plug lol

#3
Very ingenious way to set up your ailerons.

Here is an easy way to set up ailerons

#4
Bricks said:
Very ingenious way to set up your ailerons.

Here is an easy way to set up ailerons

http://i.ytimg.com/vi/QoKQV94jdAI/hqdefault.jpg
Click to expand...
Interesting!! I read that a setup like this may throw off the symmetry of the throws... I suppose mine isn't that precise anyway, though! Lol

#5
Charlbarl said:
Interesting!! I read that a setup like this may throw off the symmetry of the throws... I suppose mine isn't that precise anyway, though! Lol
Click to expand...
These planes are cheap Dollar Tree foam board, presition is not part of the game.

#6
Welcome to the forum! Sounds like you had a fun first flight! I definitely crash a lot!😆 I went through 6 mini scouts in the first month and a half. Glad the plane came together again and that your system survived! When are you
gonna kitbash your hobbies and put a rocket on the plane?😉

#7
I love the flitetest style of building but IMHO, nothing is stronger than a properly converted chuck glider...


Answer: I dont crash a lot anymore when I try not to, but I also love to push the limits of proximity fpv flying, so yeah, I crash a lot...

Mentor
#8
That's a super cool aileron setup you've got going there!
Yes, while I'm trying to fly like this, I do crash a bit...

#11
It would be fun to see his stick movements along side of the plane flying I do not think my old fingers could move that fast to keep up with the plane.

#12
The Hangar said:
That's a super cool aileron setup you've got going there!
Yes, while I'm trying to fly like this, I do crash a bit...

#13
The Hangar said:
That's a super cool aileron setup you've got going there!
Yes, while I'm trying to fly like this, I do crash a bit...

Click to expand...
With 3d I put so much attention into setup, and am so focused on flying, I never even come close to crashing, which is good considering I often have $2000+ invested. FB planes on the other hand, I tend to be not as attentive to setup, and have been known to go so far as even look at my phone while flying, so I do crash them more often, but who cares with a $5 airframe!

#14
Bricks said:
It would be fun to see his stick movements along side of the plane flying I do not think my old fingers could move that fast to keep up with the plane.
Click to expand...
It's easy to move your fingers that fast... in random directions. I don't think I could do it in any coordinated motion at all though...

#15
My first actual flight was with a Flyzone Calypso - a powered glider, and I'd "flown" that model numerous times in Realflight 7.5, before buying the real model. Even then, for my first flight, I looked up a club, and had an experienced pilot watching over my shoulder as I flew. The simulator experience helped tremendously, as did the sedate flying characteristics of the glider, and my first flight went without incident.

That said, I've crashed plenty of times since. The only way to guarantee you'll never crash, is to never fly.

I figured I was well on my way to being a true RC pilot, when I crashed one plane, and still put up two more after that. Previously, if I crashed, it shook my confidence enough that I'd call it a day, pack up, and go home. So far, I have only one plane that crashed so bad, that I still have not repaired it over a year later. Everything else that has crashed, has been repaired and returned to flyable condition (if not quite as pretty as before.

Here's the current hangar of planes in flying condition. Six of them have been crashed before, and only one of those crashed hasn't been flown again yet after the repairs. 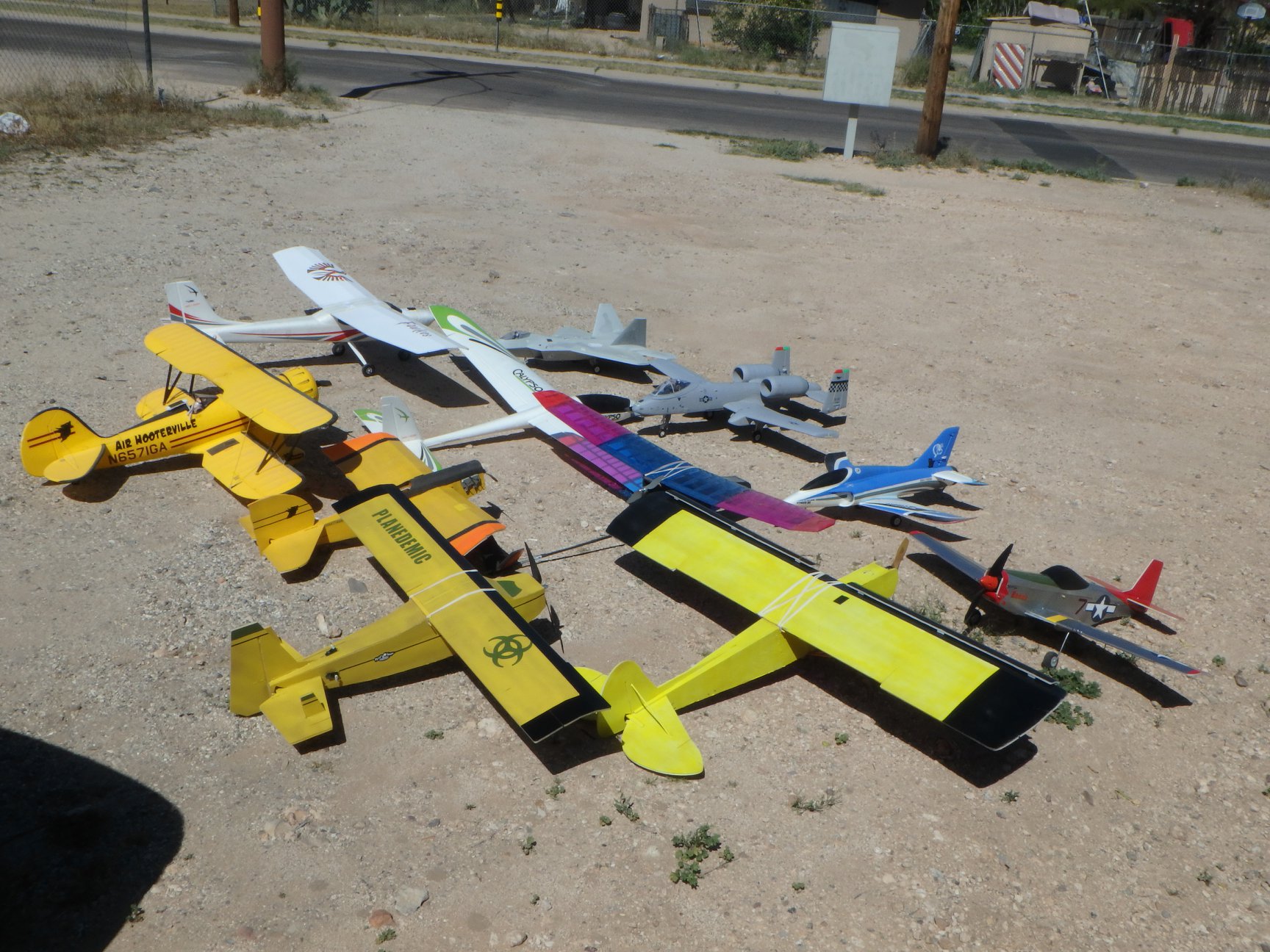