#1
Hey guys, so a while back I killed a TS832 vTx by ripping off the SMA connector off in a crash. I replaced the vTx with a much older one, and today that vTx also died and I decided to tear into the TS832 to see if it could be fixed. I had noticed when I first killed it that the solder pad had been ripped off when the SMA connector was amputated. 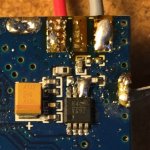 I scoured google for a schematic so I could find where that center pin connects on the RF section of the vTx. But I had no luck. I then looked at an LT200 super cheap vTx that I had taken apart and it looked surprisingly similar to the ts832.

On this vTx I found a very similar RF section with obviously different chips and a slightly different layout, but I got to thinking that maybe the wiring output would be the same for the SMA connectors. I really didn't have anything to lose so I tried it.