#1
We were at the beach last winter, and I saw these cool birds gliding overhead in big packs. Thanks to a little food poisoning, we spent plenty of time sitting on the porch watching them, and I had sketches done before we left.

I made it out of fan fold foam from Menards. It's wingspan is around 2m, 100% scale for the birds. It has an A-tail control surface, and I tried to secure the wings with stainless steel wires. That wasn't enough, so I reinforced them with extreme packing tape. I worked on it from December until Flite Fest, but still ended up finishing it just in time. It didn't last long:


I plan to cut a curved spar out of 1/4" plywood for the wings. I'm still not sure the control surfaces are large enough, but I think that will be the next step.

I intend it to be somewhat of a glider, but the folding prop I bought had the wrong size hub, and clearly it didn't fly long enough to glide.

#2
Oops. I keep confusing majestic and magnificent. It's a magnificent frigatebird!

Site Moderator
#3
That's a bummer for sure but a learning process. I do like the planes that look like birds. I have a couple in mind too. I missed seeing you at the Flite Line with it. Maybe next year.

Keep us posted with the progress.

#4
That takeoff looked quite impressive, but I couldn't help but focus on the direction of those tail feathers. It looks like the flipped you end over end. Perhaps the empennage would work better point upward.

Moderator
#5
Woah! That looks amazing in the air until the wing folded. I've built a couple of bird planes. I've glide tested both but haven't flown either yet. This is inspiration to do so!

FTF - March Madness Entry!
Welcome Aboard. I can't wait to see where you go with this.

Please post a quick notice outlining what your goals or punchlist items are.

If this is like I think It will be, I'll be setting aside a couple boards of foam for this one.

- Pull out and document broken plane from last year. I had tried a wire rigging system that could have worked but didn't but might be of use to someone for another project.

- cut out spar. I had tried to use the wires rather than a curved spar, but this time I'm going to cut it out of 1/4 birch plywood. The main spar will be 1/2" tall, and there will be a "rear spar" along the back of the wing that is 1/4 tall

The other issue is that the wings are curved front to back, so the main spar will divide up the wing pieces of the (roughly) KFm9 airfoil. The wing pieces are fan-fold foam, since that comes in 4' long sections and gives me a larger winspan without having to splice pieces of foam board together.
Screenshot of the wing sections & where the spar will sit within the upper two layers (along with powerpod and a rough sketch of the angles for the body):

- Redesign body to be made of foam board rather than fan-fold foam. This I have mostly done.

For the first version, I tried wires to keep the wings from losing their curve in flight. They were not enough to keep them from folding in the middle. Here you can see my method:
- M3 bolts through the laminated fan-fold-foam wing, with two sets of washers to help them not pull through. Stainless steel wire (beaded jewelry style) wrapped around the bolts and secured with thumb screws.
- I also used tiny linkage stoppers on the wire to give me something to pull them tight with.

It didn't work, but it might work in a different application for another project.

#9
Good idea with the wires, sorry it didn't work out. Have you considered a Steam bent wooding spar? Woodworking forums have all sorts of information on this type of construction method. Build formers to press the steamed wood into shape. Steam the snot out of it, then put it in the press and let it dry. when done, the wood is stuck in that shape. sorry I didn't think of it until now.

How's this project coming along?

Thanks for the check-in.
I've thought about bending plywood. Also thought about cutting out the spar with a jigsaw, but even that was more woodwork that I really wanted to do. ;-)

I've decided to try using foamboard rather than fan fold foam (and hope that three layers and Gorilla Glue is enough "spar"). I left the paper on the outside of each fold and made sure to have areas with paper on both sides at each "joint". Also cut a jig (in the top of the photo) out of a giant piece of Elmer's foamboard I got at Blick art supply.

Today's progress was cleaning off enough workbench to be able to laminate the foam board together on the jig. I probably won't be done by the deadline, but having to admit that is enough motivation that I'll actually get it done before FliteFest at least.

Mentor
#11
For a moment there she looked gorgeous in the air.

Best of luck on version 2.

#12
I don't have video of my attempt to fly it at FF18, but here you can see the moment my wife launched it for me. This was the best it looked, as it hit the grass a couple of seconds later. 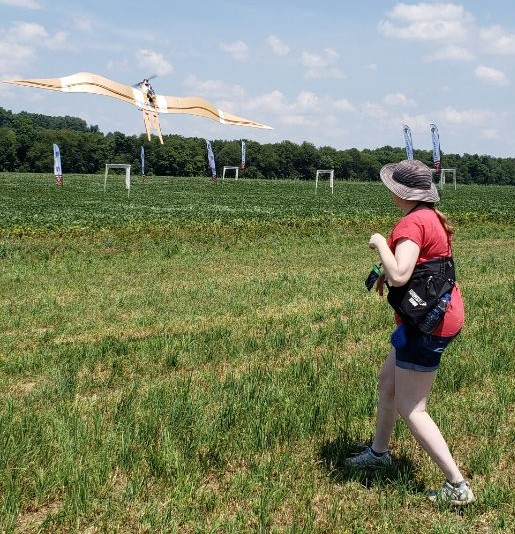 In 2017, I had it as a v-tail, but the wing failed. For 2018, I'd tried to flatten the tail to look more like what I thought a frigatebird did. But a couple of older guys who were watching this attempt thought I should try a v-tail. I came home knowing that I needed to build a more standard fuselage to glide test and then work from there. The wingspan is 2m, so I can't just leave it sit on my bench to ponder, so I put it away for months at a time. But I really want to try again at FF19, so on a recent week off I build a 200% FT Sparrow body and modified the V-tail to look more like a frigatebird. I should have taken a photo, but didn't. But it glides OK. (I took the video with my left hand while throwing with my right, but you get the idea.)

I balanced it about 1/2" from the leading edge and am happy with that. Next step is to modify the FT Sparrow body to look at least a little more like a frigatebird. I had originally bought a motor for it that was similar to that of a Radian XL, since the wingspan will be the same, but I backed down to a B pack motor for 2018 and am settling on a C pack motor for 2019. I have a Gemfan folding prop that fits it, and an ESC for which I have a programming card, so I can set the brake on the prop when the power is off.