#1
Hello I am a 14 yo from greece and I just now got in the hobby of rc planes. I decided I wanted to build my first rc plane.After some weeks i built a twin engine plane and it turned out a bit heavy with a wingspan of 1m it ways 550 grams 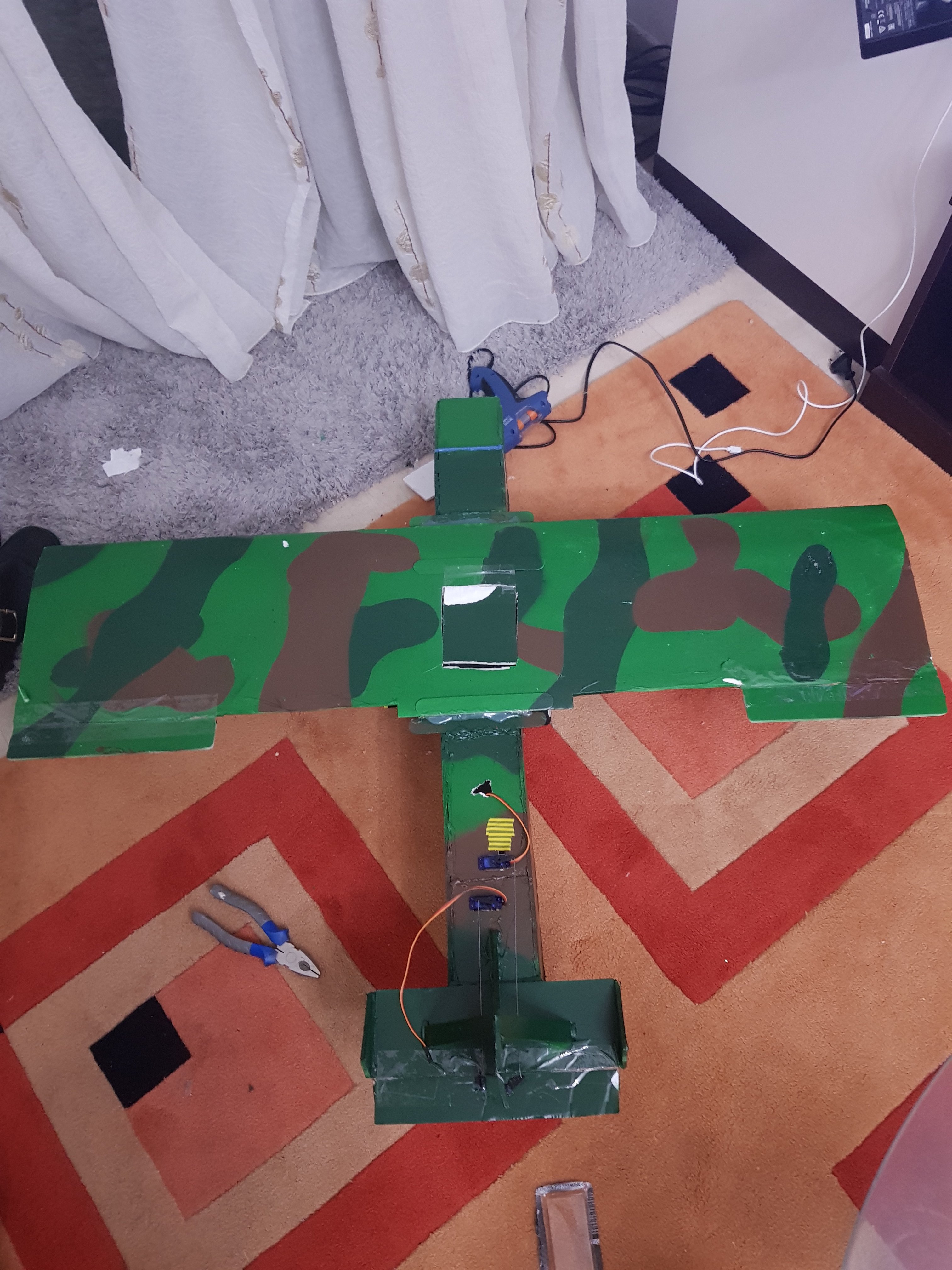 I have placed all the servos but I dont know what power system I should use how strong my 2 motors should be and what battery I should.I could just yolo it but i want to do it correctly sooo please help.

#2
That looks great for a first attempt!
Before you try to fly it I think you should make a few alterations that will help it fly better. The control surfaces are a bit small, at 500g it will fly with one motor, but with the ailerons you have and the small tail it will be hard to control. I would make the ailerons the full width of the wing, make sure they are nice and rigid and firmly attached. The vertical stabiliser needs to be about 2.5 times the size it is now, the elevator and horizontal stabiliser need to be about twice the size.
A single engine like this one
https://hobbyking.com/en_us/secret-motor-1808-2400kv-ccw-0-1-laminations.html
with a 20A esc and 6x4 prop should lift your plane. A 500mah 2s will give enough thrust to fly, or 5-600mah 3s will give you power to spare.
If you want to stay two engine then two like that, one CW and one CCW and a pair of 5x3 props will add quite a bit of thrust but will need a bigger battery, which may make your plane too heavy, the wing area is quite small.
If you can get an idea of the centre of gravity to set that up it will fly much better if the balance is all set up right.
S

#3
Thank you very much! I will probably go for the twin engine design and now that you ve said it I will totally increase the area of my control surfaces. One last thing, for the twin engine setup what kind of battery should I install?
Last edited: Jan 27, 2019

#4
You will need a battery that meets the power requirements of your motors, probably a 2 or 3s of at least 1000mah with a constant discharge rate of 40c and a 65c burst. Turnigy Graphene or Panther lipo from HobbyKing’s EU warehouse are probably going to be best. If you make the tail bigger, make sure whatever you use is light, 3mm foamboard or lighter. Any more tail weight will be hard to balance. Your battery will have to fit in the nose of your plane to balance the tail weight. Watch out for making the whole thing too heavy.
Single engines are both cheaper and simpler, that’s why I suggested it, plus the engine will counter balance the tail weight, you can use a smaller battery and the electronics are much easier to set up.
S

#6
If you melted the hot glue holding the wing (try a hairdryer) it looks like you could make it removable, which would be useful to protect it from damage in a crash and to allow you to change the wing if anything happens to it or it turns out to be too small. Use two wooden kebab skewers through the fuselage and a pair of elastic bands to hold the wing on, see the Tiny Trainer for an idea of how to do that.
Make sure at least one ESC has an onboard BEC to power your radio gear.
What transmitter and receiver are you planning on using?
S

#8
How did you centre the servos on the tail before setting up the pushrods?
The Flysky is an excellent first radio, lots of people here use them. You can reply to posts without quoting the whole post if you use the box at the bottom of the page not the button in quotes.
S

#10
Well done, usually when you turn them on they will move, at least on your design the arms are easily removed. Centre on most servos is also not just visually in the middle of the casing, all mine seem to be slightly one side or the other.
S

#11
Can I ask you something? Isnt the battery a bit small?

#12
No, light planes need small batteries. If you put a big battery in there it will be very nose heavy. You do not have a big enough wing area to lift more weight. My Tiny Trainer weighs 325g fully loaded, including the battery and radio gear, the largest pack I can fly it with is 1000mah 2s, which makes it more nose heavy and has to be pushed back into the fuselage. That is already lighter than your build and has a similar wingspan. With small planes you must go as light as possible as scaling the wing down produces a lot less lift. Less glue is a good way to lose weight.
I still think a single engine solution will work better with that plane, it needs less current, will be cheaper, simpler to set up and is lighter.
Also you need to get some dihedral in your wing if you can, to help keep the plane upright in flight, flat wings are harder to control.
S

#14
You might be able to fit a 1300mah 3s if you still want to go two engine, but that will make for a heavy build, you will be near 800g at least. My huge Sportster is that heavy with the largest 3s battery, it has twice the wing area of the TT.
S