#1
I thought that this would be interesting to some readers given a few other comments about not liking the models where the wings are glued in position to the fuselage, so here's my modification to the Simple Scout, from the UK.
Having printed out the plans at 100% scale I also took a look at the main wing incidence versus tailplane incidence. From my measurements this looked to be about 0.5 degrees which is low compared with the more usual 3 degrees. So my modifications are;
1. Make the wing removable
2. Increase the wing incidence to about 3 degrees to reduce flying speed

The overall build is as per the Flite Test video but without cutting out the fuselage for the wing and a modification to the turtle deck structure.

Here's the fuselage built with then the revised cutout marked to accept a wing on top. Note the cutout shape has a step to reflect the underside of the wing. 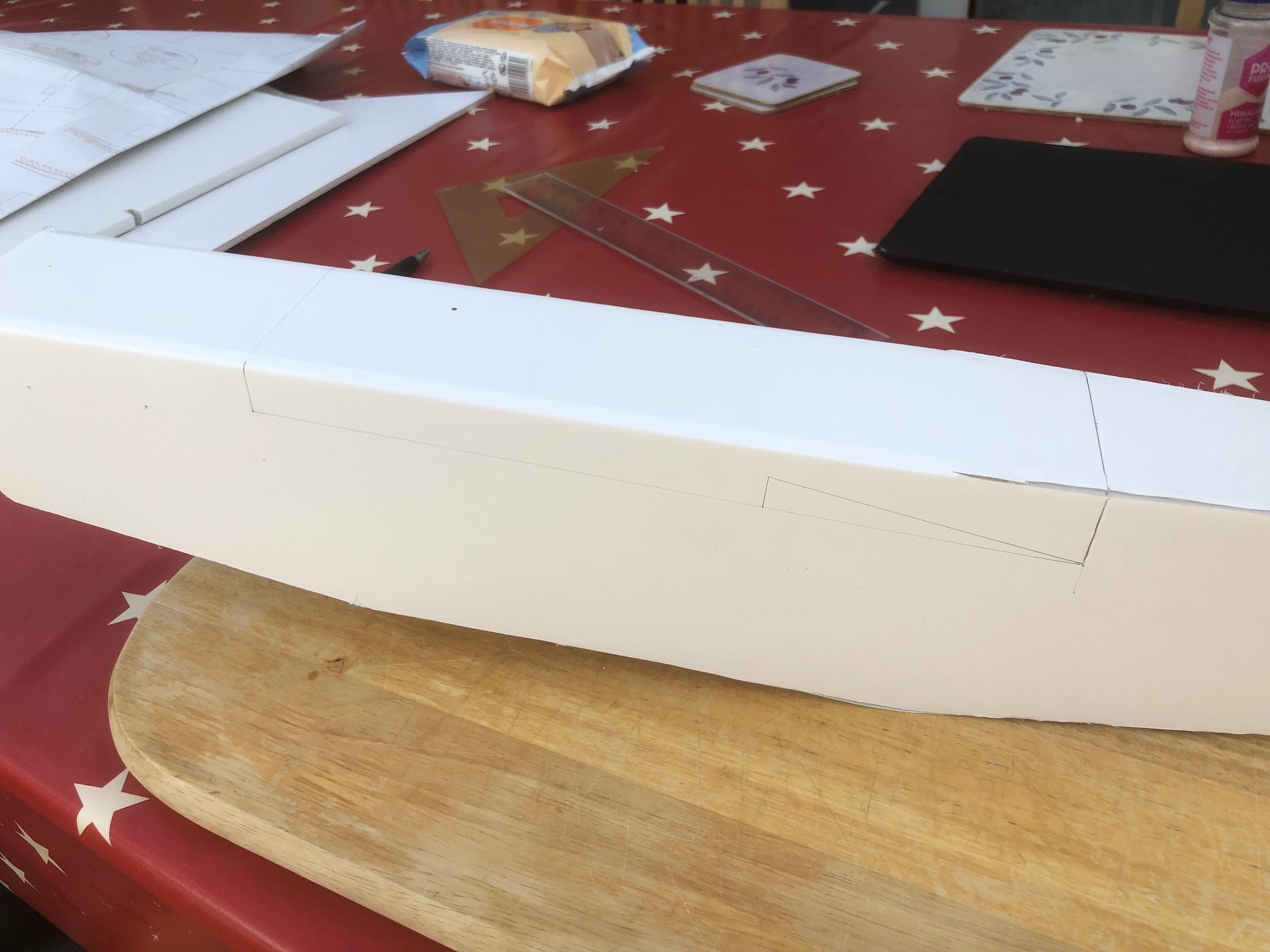 Cutout made and wing placed in fuselage: 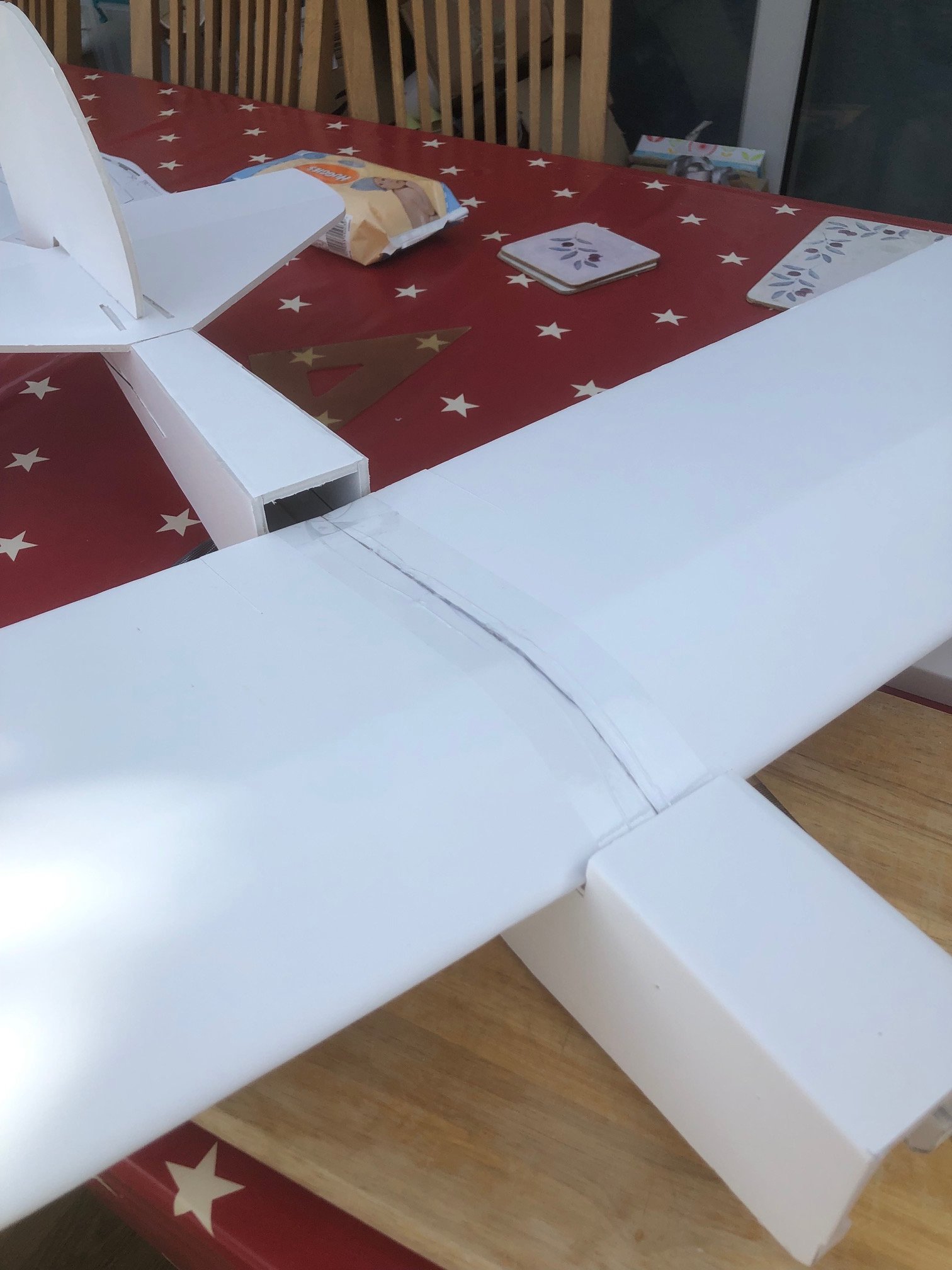 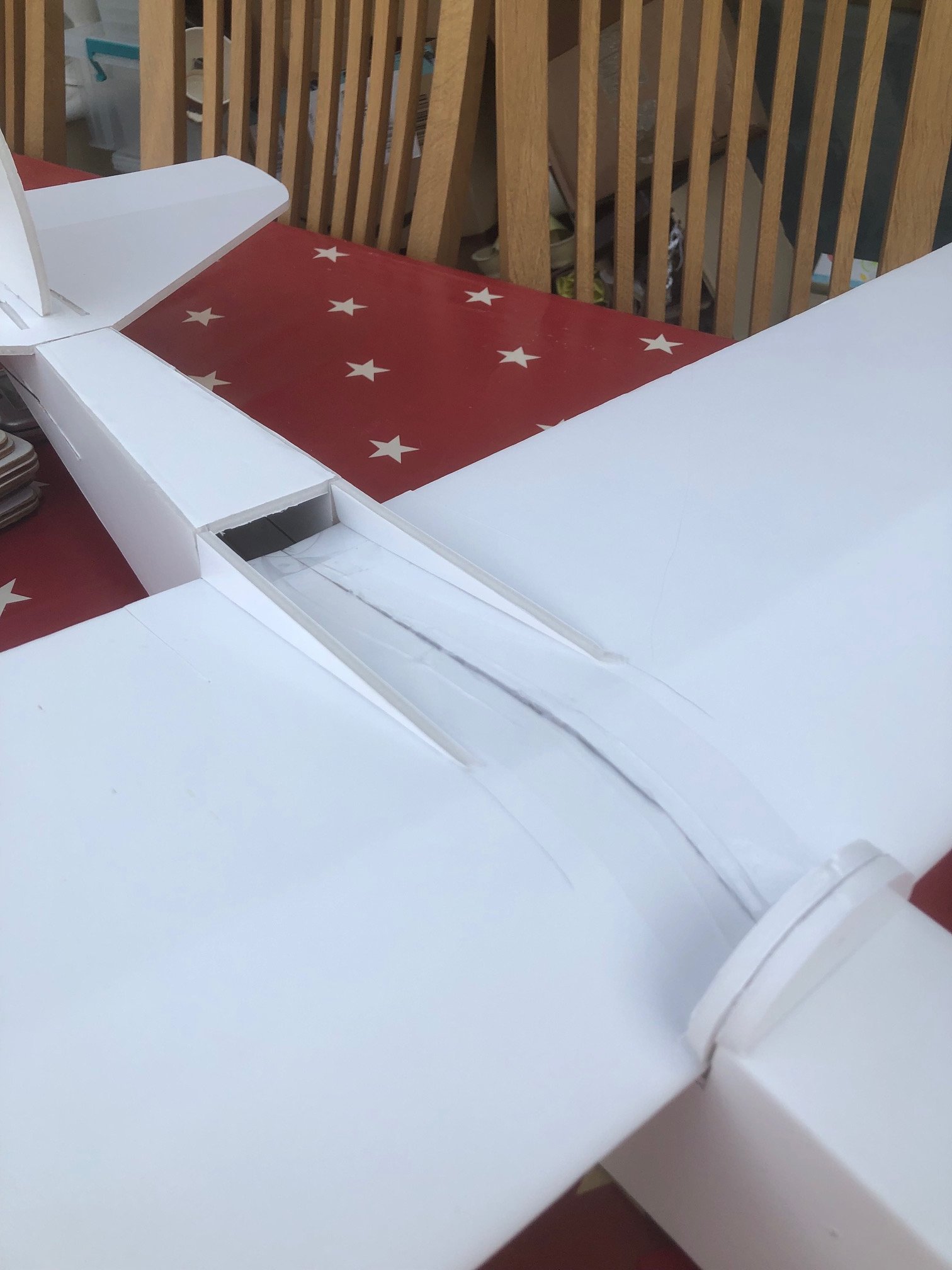 Here's the turtledeck parts cut out ready for gluing: 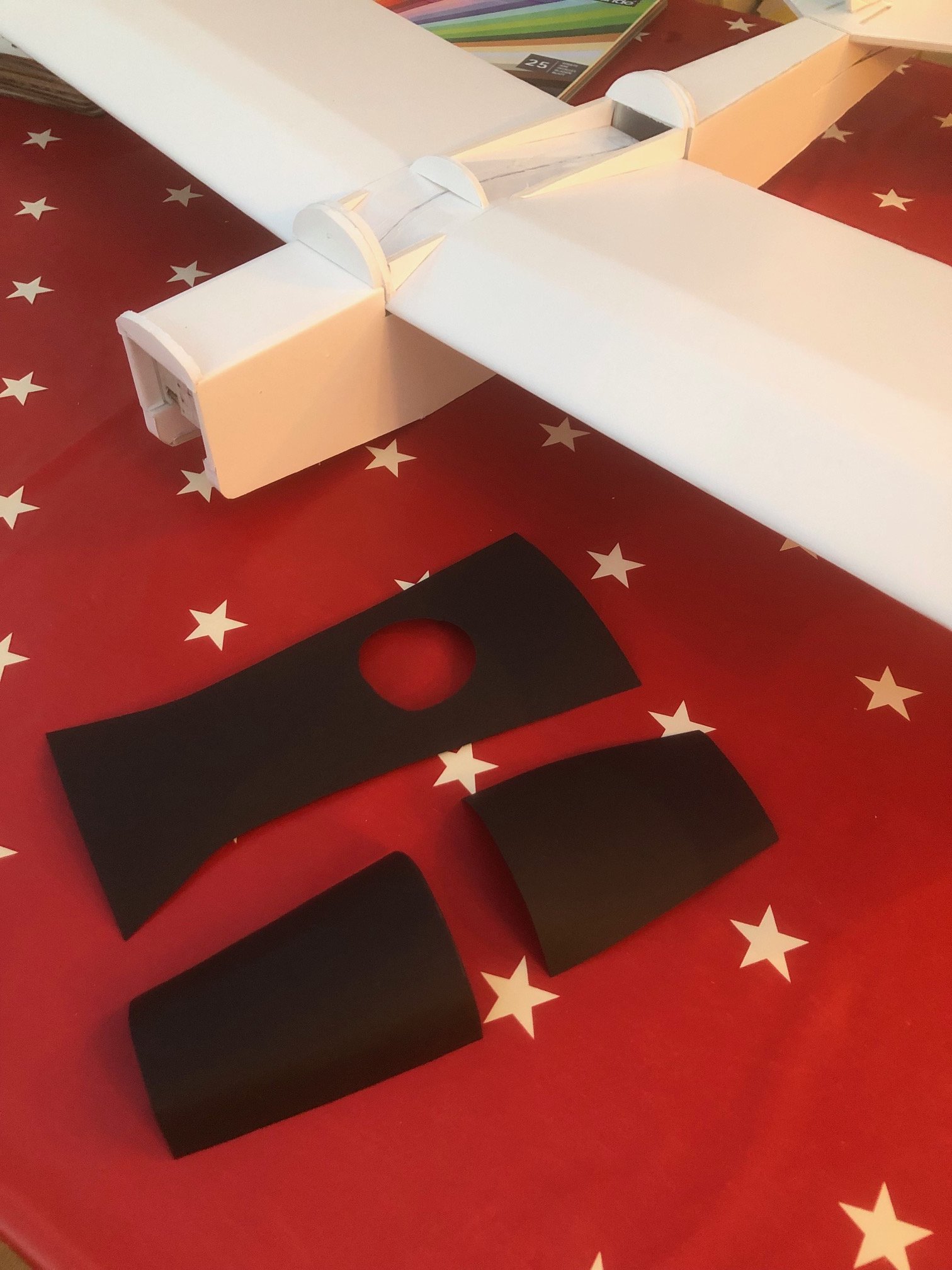 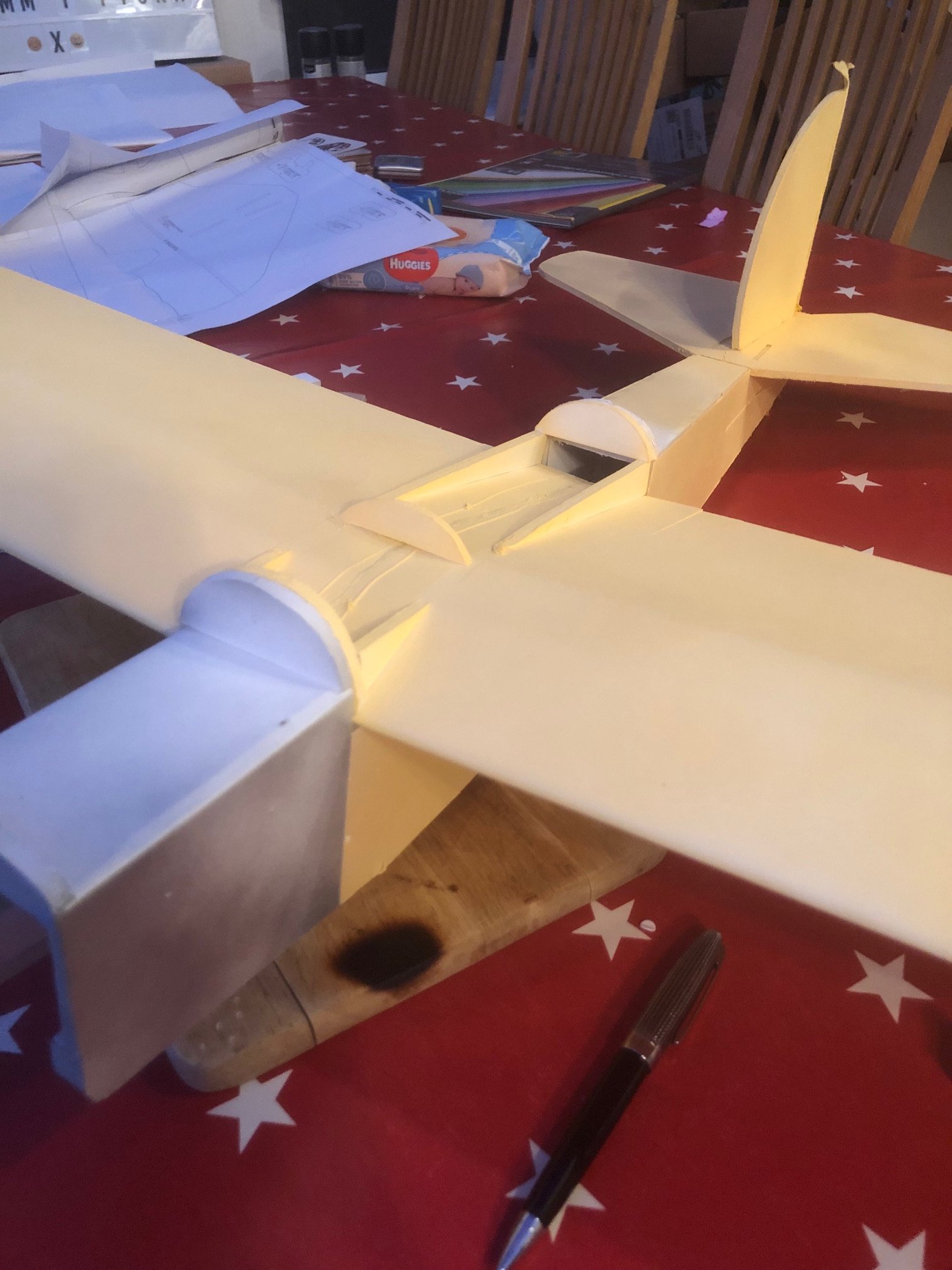 And the turtledeck glued in: 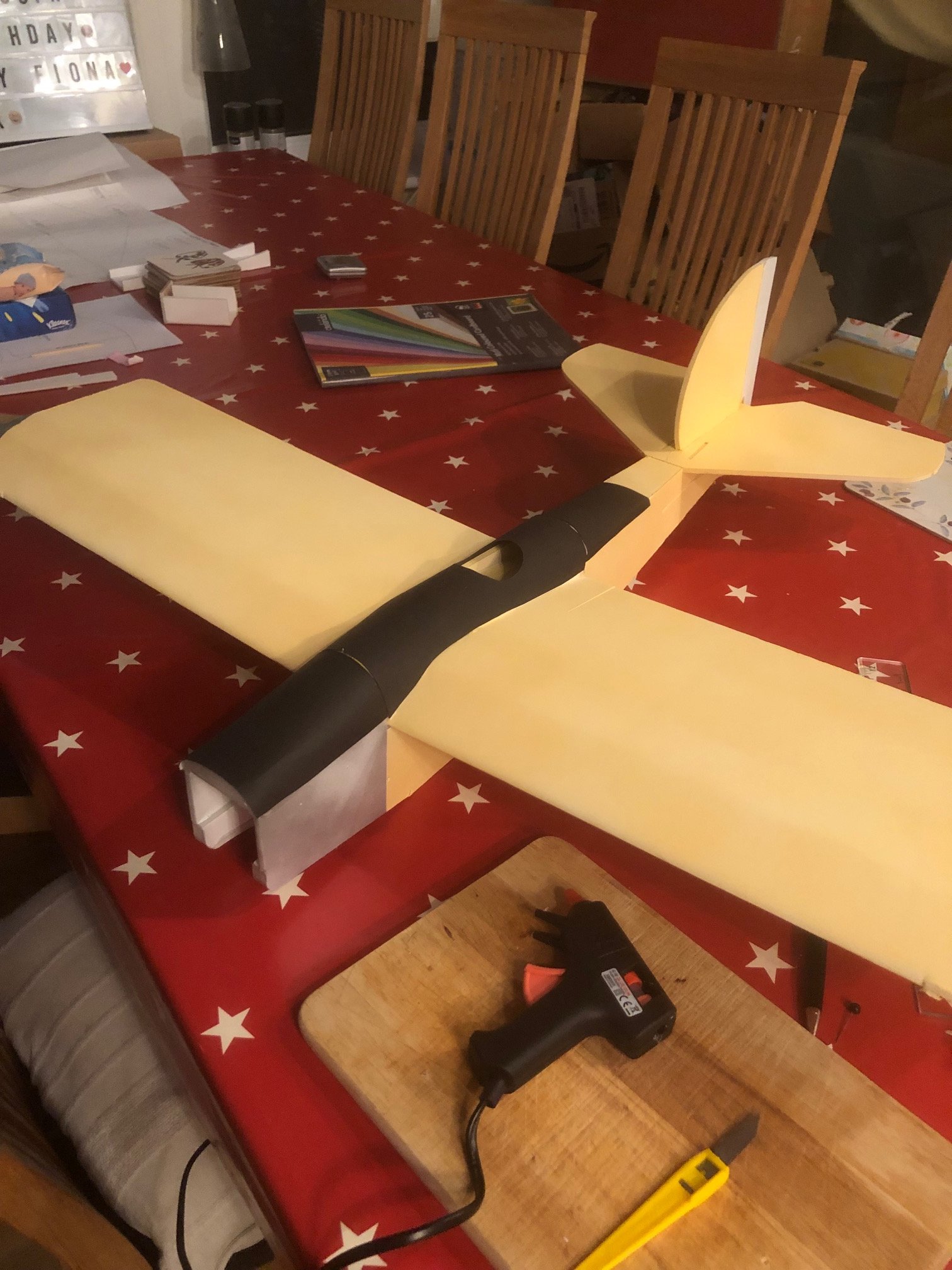 Here's the model with the paint job (natural canvas effect): 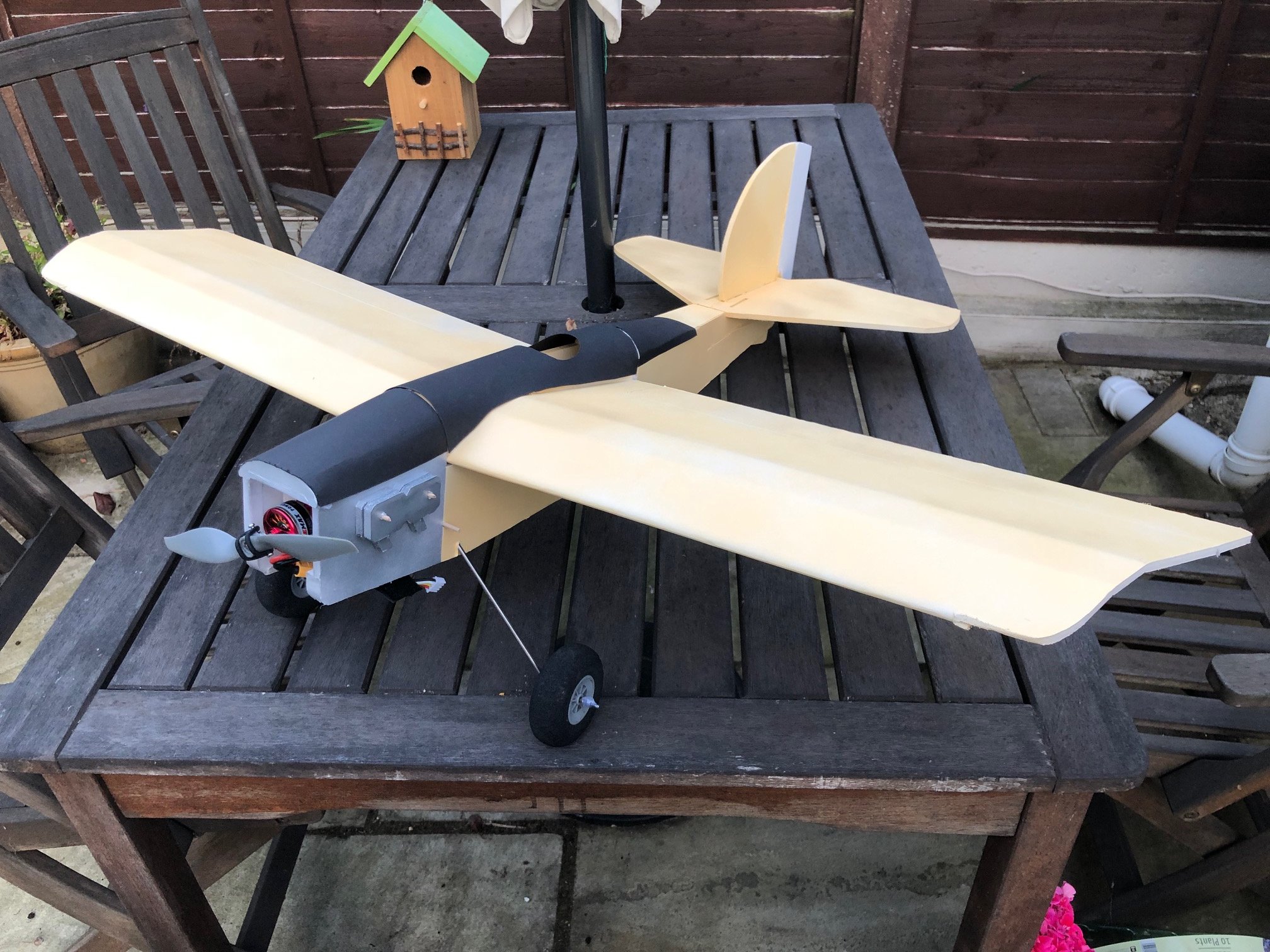 Finally, to follow the WW1 scout semi-scale theme, I went for a Royal Flying Corps canvas type colour and roundels. The roundels and other decals were just found on the internet and printed to paper then stuck with PVA glue with lacquer sprayed over the top. 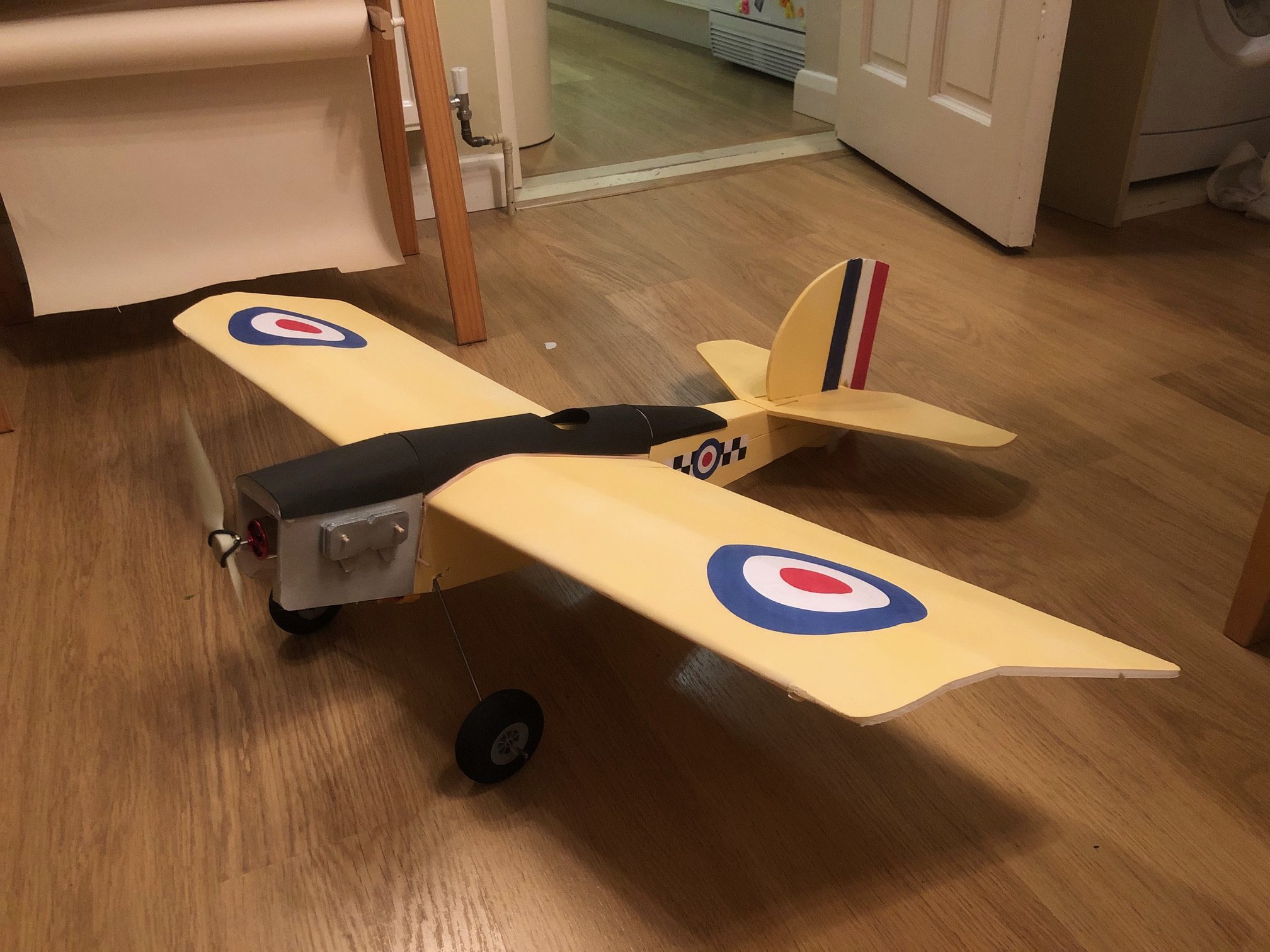 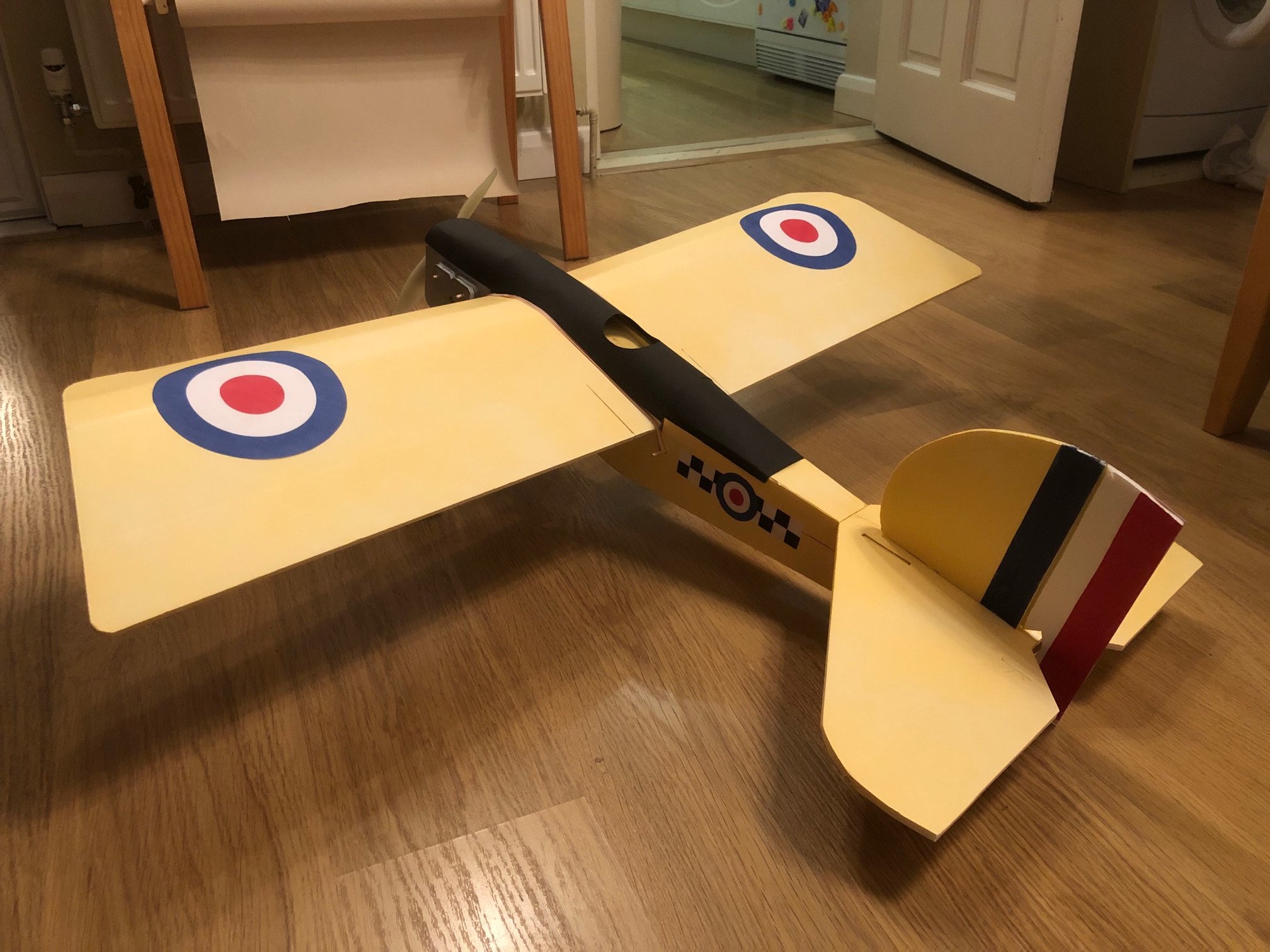 You can see above that the wing is banded on with two barbeque skewers pushed through the fuselage. At some point I shall fit a pilot and a Lewis gun for good measure plus maybe some weathering.

Maiden flight was uneventful. I powered this with a 1400Kv motor with 8x4 prop and 3 cell 11.1v 1000mAh LiPo pack. Initially flew with rudder, elevator and motor but then quickly added ailerons/flaperons. Performance is ok. Weight came to about 20oz with battery pack.

Really pleased with this modification and being to separate the wing from the fuselage.

I'm still a novice pilot in that transition from rudder to aileron and chose the Scout as an interesting next step from a high wing trainer. Hope to post a flight video at some point....

Mentor
#2
Nice job on the removable wing! I built a FT scout as my new step up from the FT old speedster, as I felt ready for something a little more sporty with ailerons. I really like the plane, however the non-removable wing... I was toying with the Idea of establish the dihedral and glueing the wing in, then cutting the wing off at each side of the fuselage, and figuring some way to attach the wing halves again. I never thought of doing it this way, and if I build another scout, I’ll definitely have to try this!
J

#3
Thanks for your reply.
Yes the reason for doing it this way was to preserve the integrity of the wing strength.
I suppose for a 24” model having the wings stuck in is ok but not for 36”.
I guess another mod might be to move the wing to be low wing and then it is a simple cut out in the fuselage.
Cheers Justin

Mentor
#4
Yeah. And you did an awesome paint job!

#5
THIS is why I love FT!!!
I just wish I had found this two Days ago... Before I glued the Wings in place, with Hot Glue AND Gorilla Glue. 😲

That removable Wing is BRILLIANT!! 😎👋👋👋
I am building a second Scout, as soon as my friend here can get the time to Cut it for me (Disability issues).
I can tell him NOT to cut the Wing Root Holes!! 😁

SHOULD you want to check out my Build Thread.....
https://forum.flitetest.com/index.php?threads/my-ft-simple-scout-build.59787/

I'm not a N00b - not an expert either, by any stretch! But I have been building Models (Plastic Kits since 1973, Model Railroading since 1975, and RC Ground since 1984). Some here find my building practices "unorthodox".
I don't Build ANYTHING Stock anymore!! 😜
So, if you'd like a different take on building these, please check them out. I'm also currently building a FT Storch (with Tricycle Landing Gear!), a Cub (crash and burn!), and some Minis on different threads
THANK YOU!
J

#6
Glad you find it useful!
I also moved the wing higher in the fuselage and increased the incidence of the wing to make more of a difference between wing and tail incidence.
Justin

#8
Justin1970 said:
Glad you find it useful!
I also moved the wing higher in the fuselage and increased the incidence of the wing to make more of a difference between wing and tail incidence.
Justin
Click to expand...
Very nice indeed. 👍👍
I'm more CAREFUL about Incidence adjustments, after finding out that 5% was WAY too much for my Cub. It was great if all you wanted to do was LOOP every time you goosed the Throttle!!! 😲😣

I went a different approach to my Scout.... Kept the low-mid Wing, in case I decided to do something like inverted Flight. 😜 Especially if I can afford to go FPV.

I merely Increased the Dihedral, from 12 to 15 degrees. Even though I'll be flying with Ailerons (for the first time!! 😲), I'm looking for some more Stability.

I've mentioned this TOO often, but I'm a former Air Force Sergeant Pilot and 1:1 small Aircraft Pilot....
The ONLY thing that prepared me for RC Flight, was that I've been in RC Ground since 1984. I've got experience using a Remote, operating LOS, and am comfortable with reversing control direction when the Vehicle is coming towards me.
Sometimes though, I feel like a N00b!! Sometimes I'm treated like one also. 😖😠

Your removable Wing is BRILLIANT, as I said. I just thought of this NOW...
HOW AM I GOING TO GET IT ANYWHERE IN MY WIFE'S CAMRY - WITH 2 Baby Seats in the back for our Grandkids???? 😖😧
DAMN!

#9
Here's something else intriguing, that I'm doing to my second Scout..... 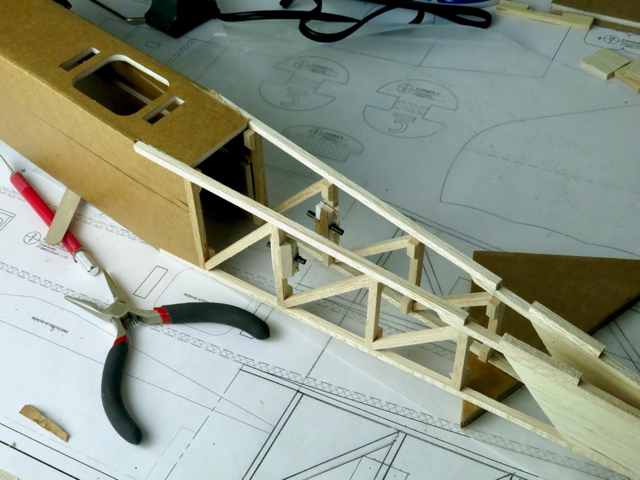 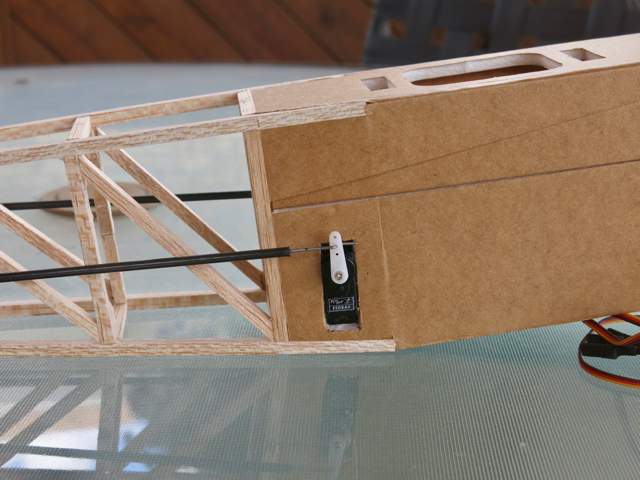 A real Old School look!
Doesn't work with your removable Wing... SO, I guess I'll just have to build a THIRD!!! 👍👍
J

#10
Looks great! I’m starting to think the optimal might be balsa fuselage and then foamboard for wings and tail. Having built some other foamboard models, I think the Scout wing could be single skin rather than a folded structure. I think the undercarriage could be improved possibly by wiring it to a traditional plywood former in the fuselage.....

#11
Justin1970 said:
Looks great! I’m starting to think the optimal might be balsa fuselage and then foamboard for wings and tail. Having built some other foamboard models, I think the Scout wing could be single skin rather than a folded structure. I think the undercarriage could be improved possibly by wiring it to a traditional plywood former in the fuselage.....
Click to expand...
I've already rethought the Landing Gear.....