#1
I recently bought the volantex ranger 1600 and took it for It's first flight last week.
It flew no problem when un-powered it glides beautifully but when add power it seems to pitch the nose up while still flying straight .
It seems to loose a lot of efficiency when i do this.
I guess the motor needs some shims to adjust thrust angle but not sure if it needs to point up more or down more.
My guess is tilt the motor down more.
Anyone here had this issue with a pusher and fixed it ? 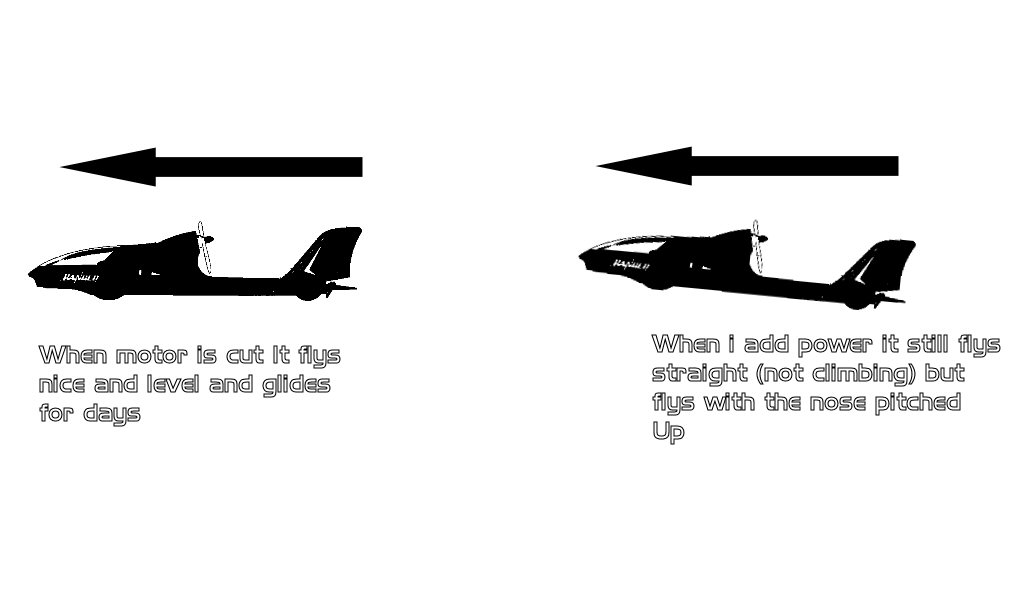 #2
sumone
I am not sure what you suggest is actually what is happening.
When gliding the plane is descending although it may look like the fuselage is level. In powered level flight the nose will be raised slightly compared to when gliding.
Note the angle the fuselage appears to fly through the air is determined by the way the wing and tail are set up rather than whether the motor is on or not.

Are you sure that no 'up' elevator is being inadvertently being applied in level flight when the motor is switched on?
In this situation it would mean the plane is actually being flown too slowly for best efficiency.

All planes will tend to climb to some degree when thrust is applied. Angling the motor thrust line down, as in your case, simply reduces this tendency.

#3
I do have some pusher experience and I didn't have to mess with thrust angles on mine but there is some simple theories that may have something to do with this conundrum you are having. Judging by your pic this plane is the same design as the FT Explorer. The motor will have the right thrust angle for the position of the wing on the airframe. It's thrust angle should point towards the center of the wing. When under power it will override the wing and increase its angle of attack, which is good for the wing but not so much for the elevator. If you leave it it will float nice at slow speeds but will also have a higher tendency to stall. One solution you might be able to try is to if the wing is removable is to shim under the leading edge of the wing to give it a fighting chance off the start. Might only take a millimeter or two, the thickness of a popsicle stick or two. This should, in theory, leverage the tail, and the rest of the airframe, level in flight under power. If this makes sense , try it out and let us know what you find as far as results.
You must log in or register to reply here.
Share: Facebook Twitter Google+ Reddit Pinterest Tumblr WhatsApp Email Link
Menu
Log in
Register