What Did You Fly Today

#141
Well after last flight of coming in deadstick when the motors cut out and by the time I walked to the plane it was working again, both motors quit at the same time so it can't be 2 dud esc's or motors. So lets go for another flight and see what happens, well the motors didn't quit but twice the pitch didn't respond right away so I brought it in early, going to try swapping out the rx and see what happens next time out.

#142
Took my NexSTAR up again today, this time with FPV! I was still flying it line-of-sight but the FPV system was recording the entire time. Flew it twice but most of the 2nd flight's footage got corrupted. Will try to recover later. Need a new engine mount, though...

#143
I did get a flight in before the wind changed direction and brought in rain (again) . I did have the fpv camera going but that video is still loading up. I will have to see if I can combine the 2 later on.

I did take it high and didn't lose signal so that was good.

#144
@Wildthing - the clouds are going to look great from the camera!

#145
bracesport said:
@Wildthing - the clouds are going to look great from the camera!
Click to expand...
Well here it is, boring as can be , no editing . Reception in spots is pretty good and then it is crap , also for some reason it split the video into 2. One is a little over 10 minutes and the other 9 minutes, well the 9 minute one is just a picture even though it shows it is a movie. It was also the end of the flight when I took it up higher. oh well.

#147
Fawkes had her second flight after a bit more refinement on the new wing, and definitely better with the reinforced wing and reduced rates on the ailerons. Still flies differently than she did as the Sensei, but as I get used to her new traits, I think she'll be fine. My better half is planning on making the decals for her this week, so she should have her new plumage by her next flight.

The Stinger made her third flight this morning, with a much better landing than last week. Still not as pretty a landing as I'd like, but she touched down safely and rolled to a stop well before the end of the runway. The nose gear attachment came a bit loose, but not enough to cause any problem. I just need to reglue it before the next flight. I tried to set a camera on the tripod to record her take-off and landing, but the aim of the camera was off. She rolls through the frame before liftoff, and has already touched down when she enters the frame at the end. Still no actual video evidence of her flying, unless you want to count the sound of her passing just over the frame of the camera on the flight passes.

The Simple Scout flew again today, and this morning, I only gave her about half throttle to take off. She lifted off nicely at that level, letting me know once again that I have her a bit over-powered. For an inexpensive plane made of foamboard held together with hot glue, she sure is a sweet flyer. I think she could easily become my favorite go-to plane. 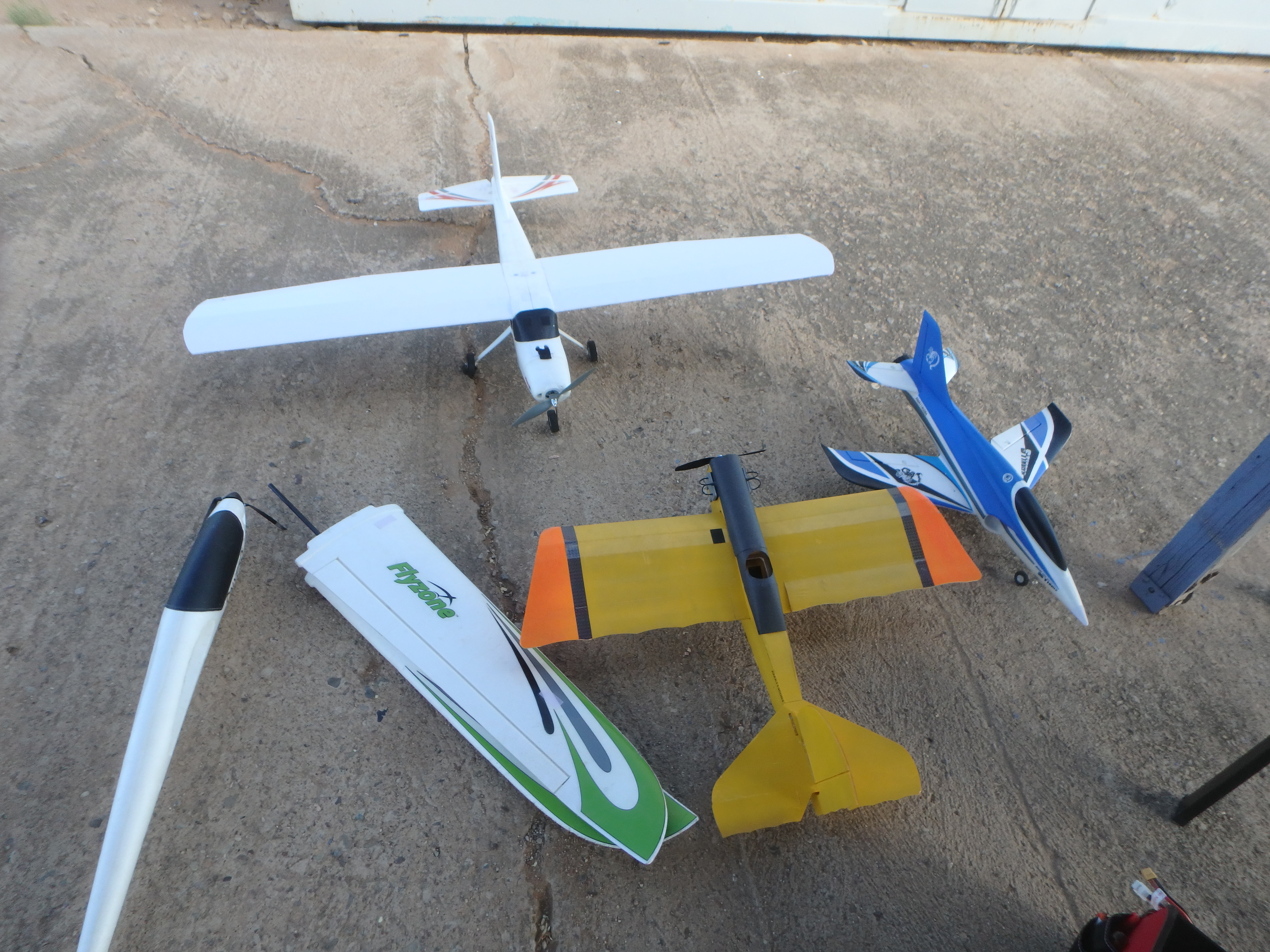 #149
Compilation of my flight testing today, with three custom designs, Tailed Nutball, V Sliver, and new AET slender delta. Either there is a setting I have not found on the video editor I'm using to make the quality match the quality of the video clips I used(1080), or because I'm using the free trial version, it got dropped to 720.Good flight footage regardless. I had overheating issues with tailed Nutball and Sliver needed an emergency trim, and the AET bird is a bit underpowered, but other than that, went well.

#150
At the field as I type this! Flying my NexSTAR with the Magnum 52FS on it. Flies like a dream, already two flights in and the conditions are perfect for burning more glow fuel! And that thumper is running flawlessly too. Fuelled up for flight 3, just waitin for some of the other guys to have a turn before I go out there!

#151
Fawkes took to the air with new plumage, courtesy of my terrific better-half, plus the Stinger got her fourth flight today, and Air Hooterville took to the skies for the first time in almost a year. After that, the wind was kicking up pretty good, while changing directions frequently, so decided to call it a morning and head home. 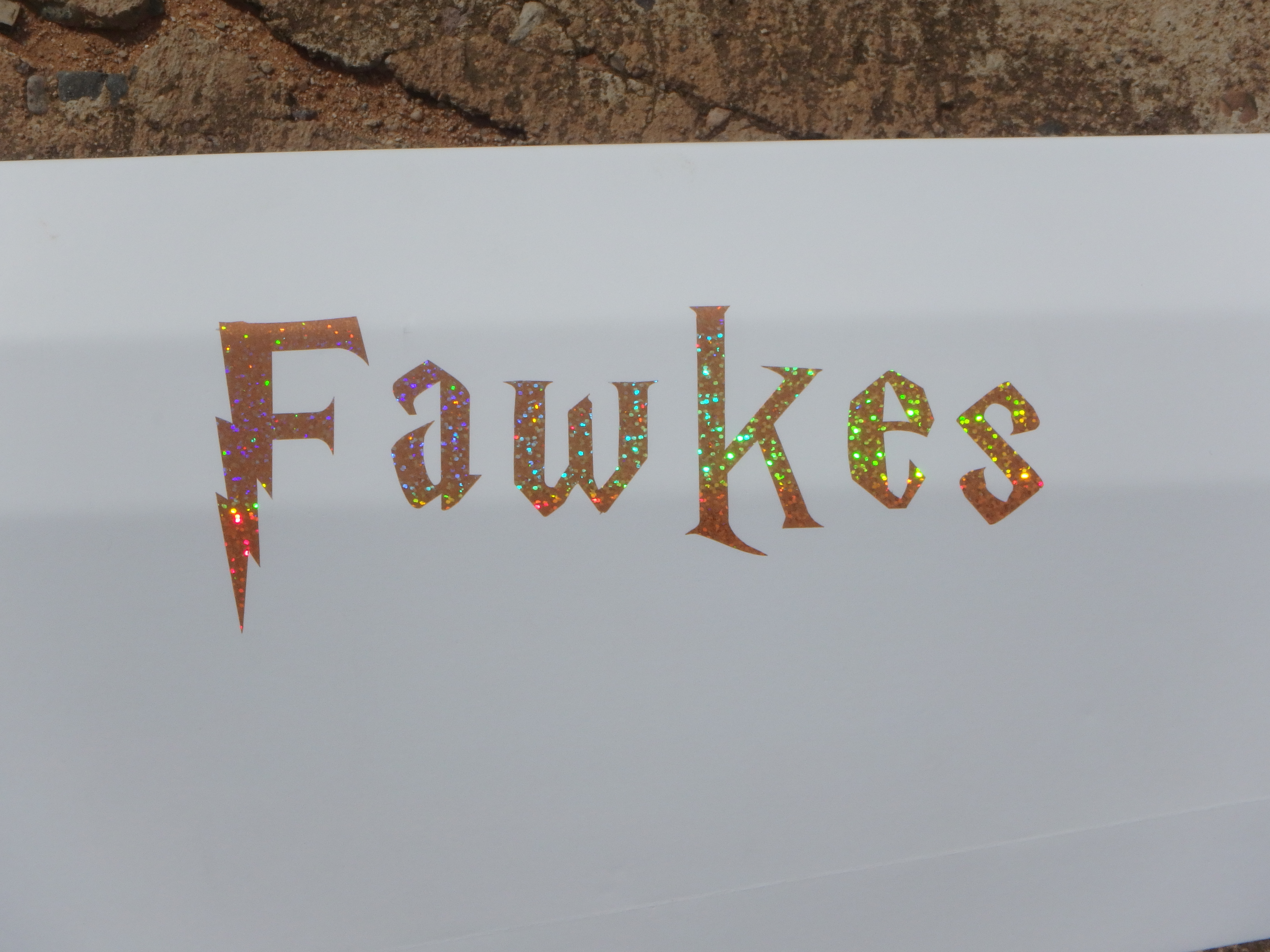 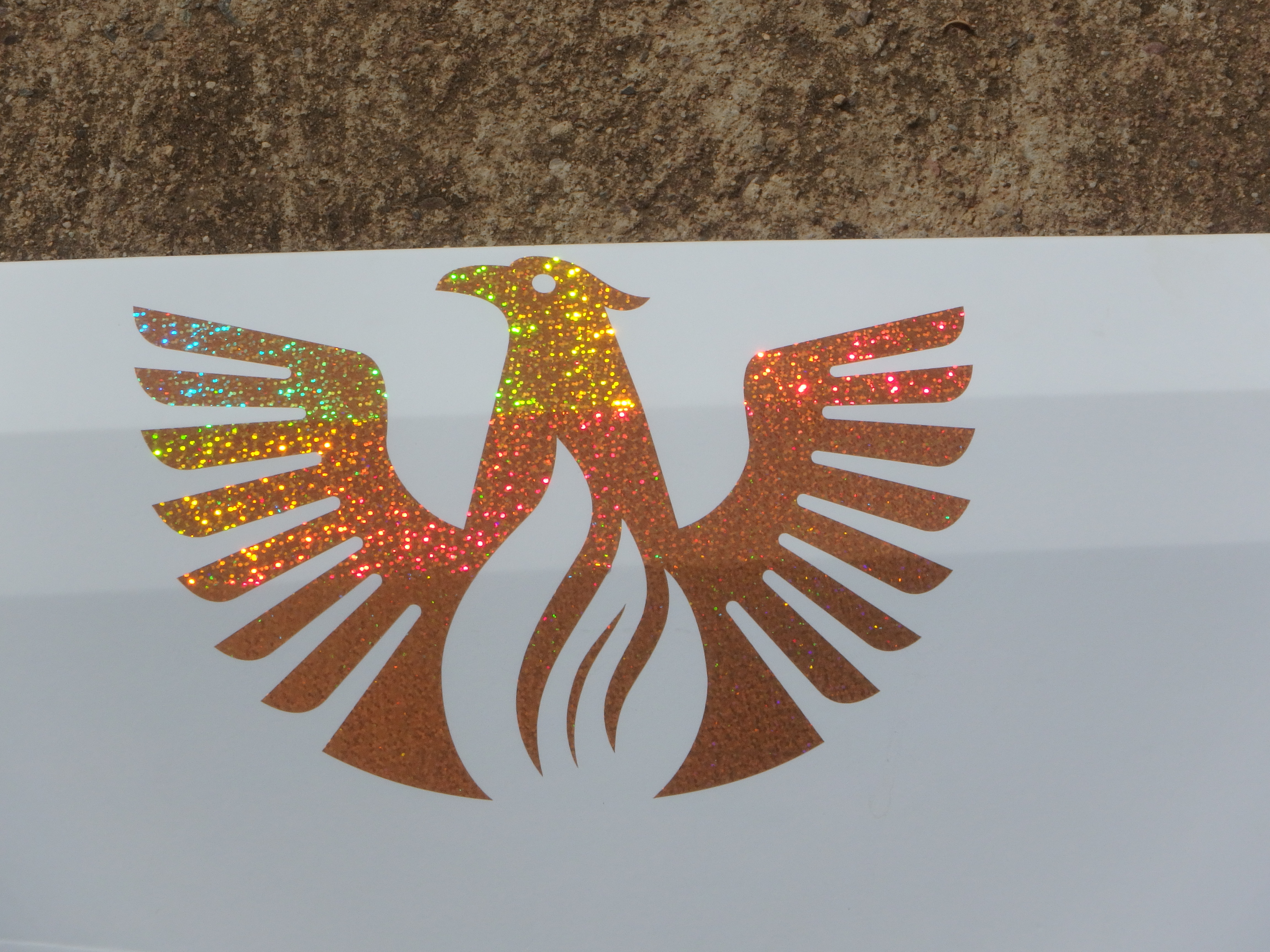 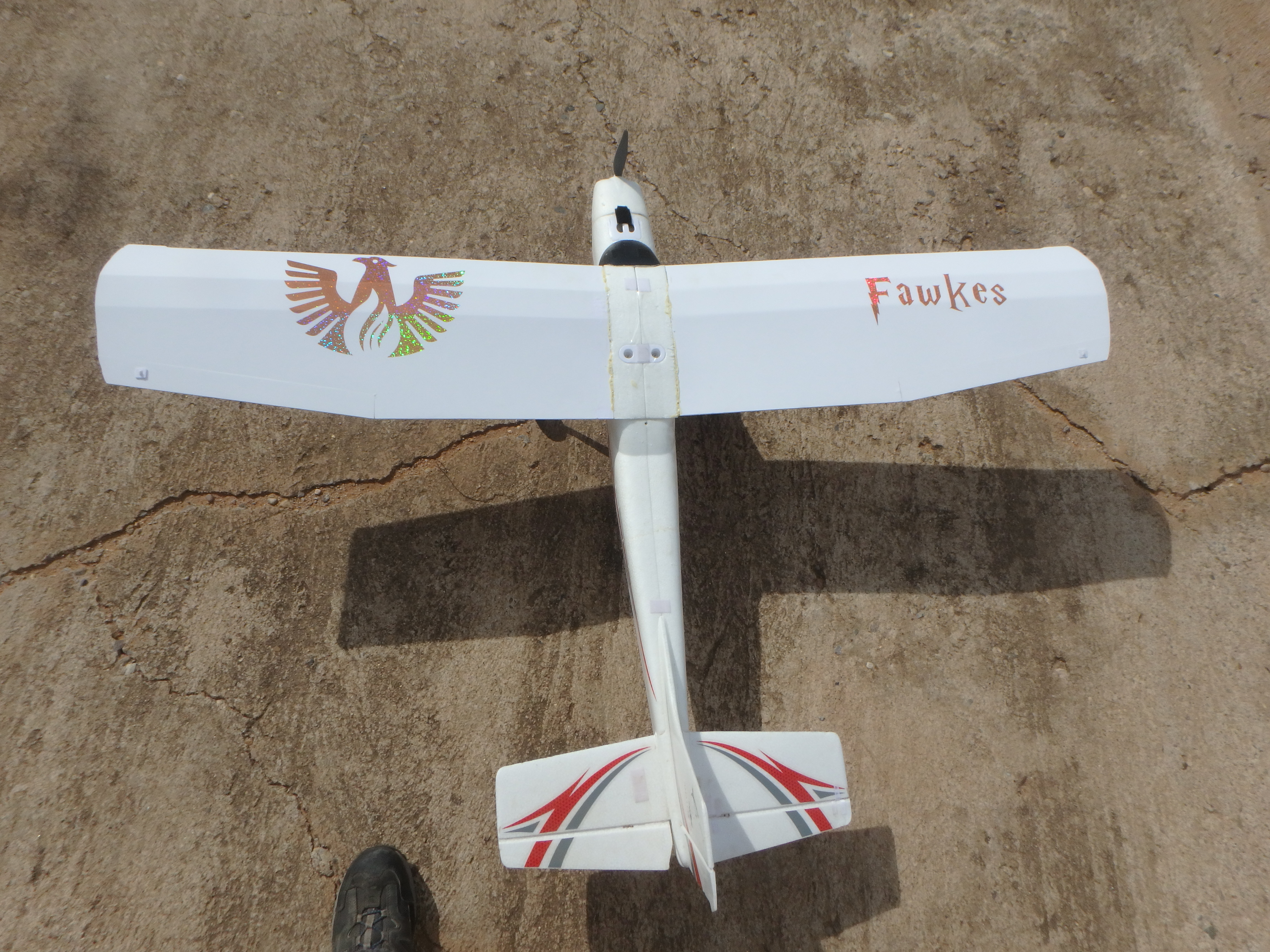 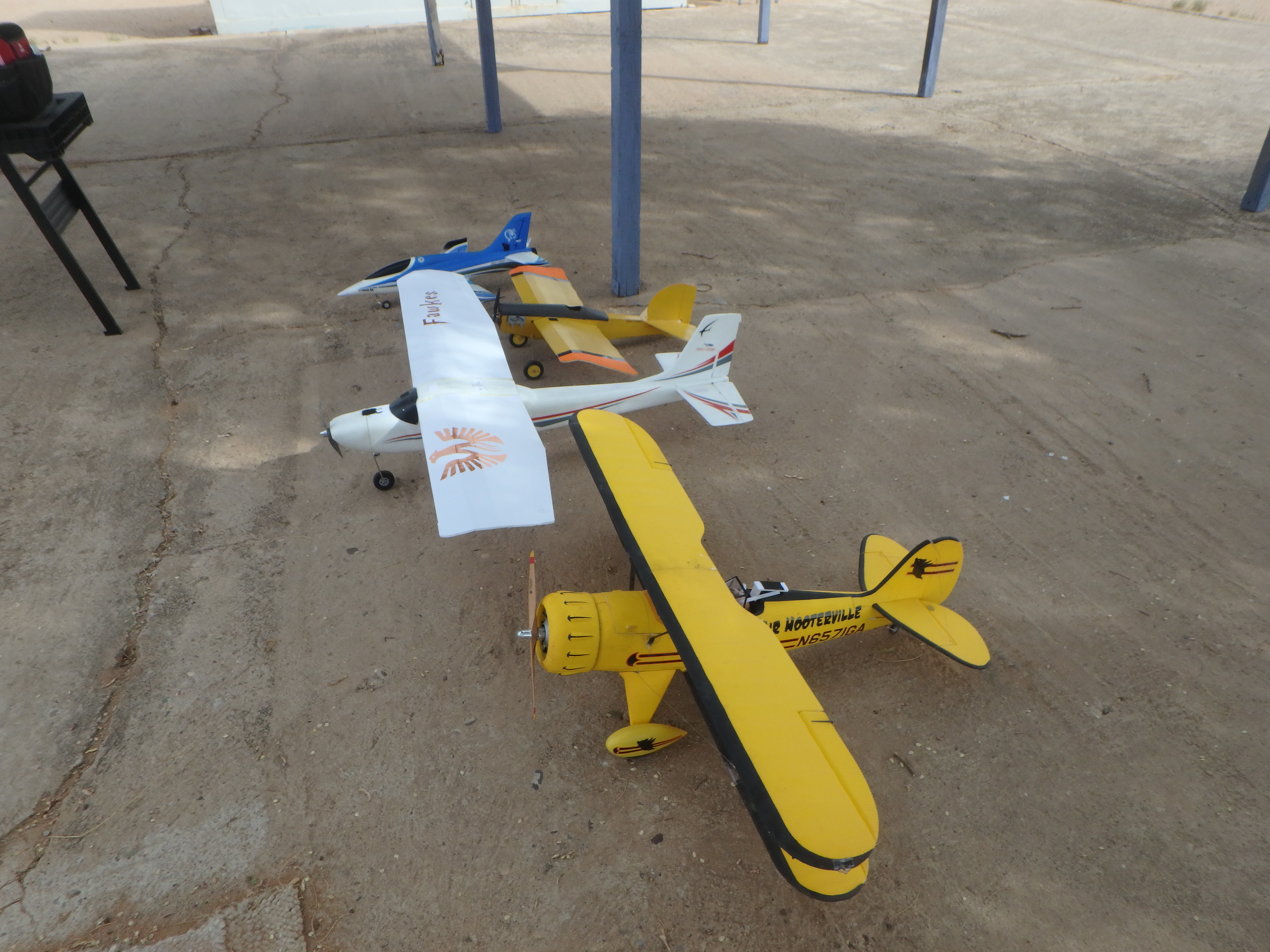 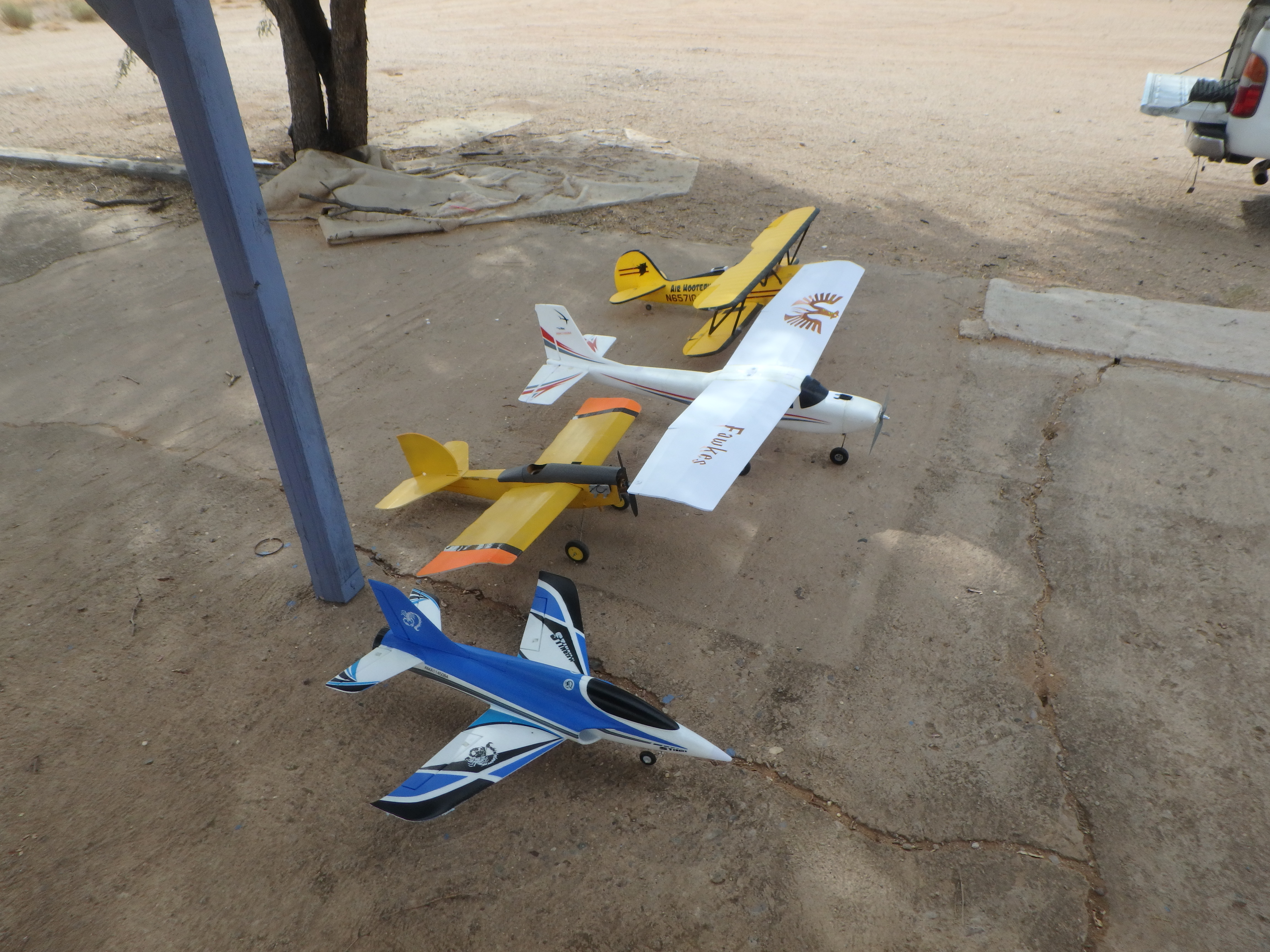 #152
Hoomi said:
Fawkes took to the air with new plumage, courtesy of my terrific better-half, plus the Stinger got her fourth flight today, and Air Hooterville took to the skies for the first time in almost a year. After that, the wind was kicking up pretty good, while changing directions frequently, so decided to call it a morning and head home.
Click to expand...
Looks like you will never have to paint a plane again .

#153
A screen-grab from the video of Air Hooterville's flight yesterday.

Unfortunately, it doesn't show the Air Hooterville logo on my t-shirt. 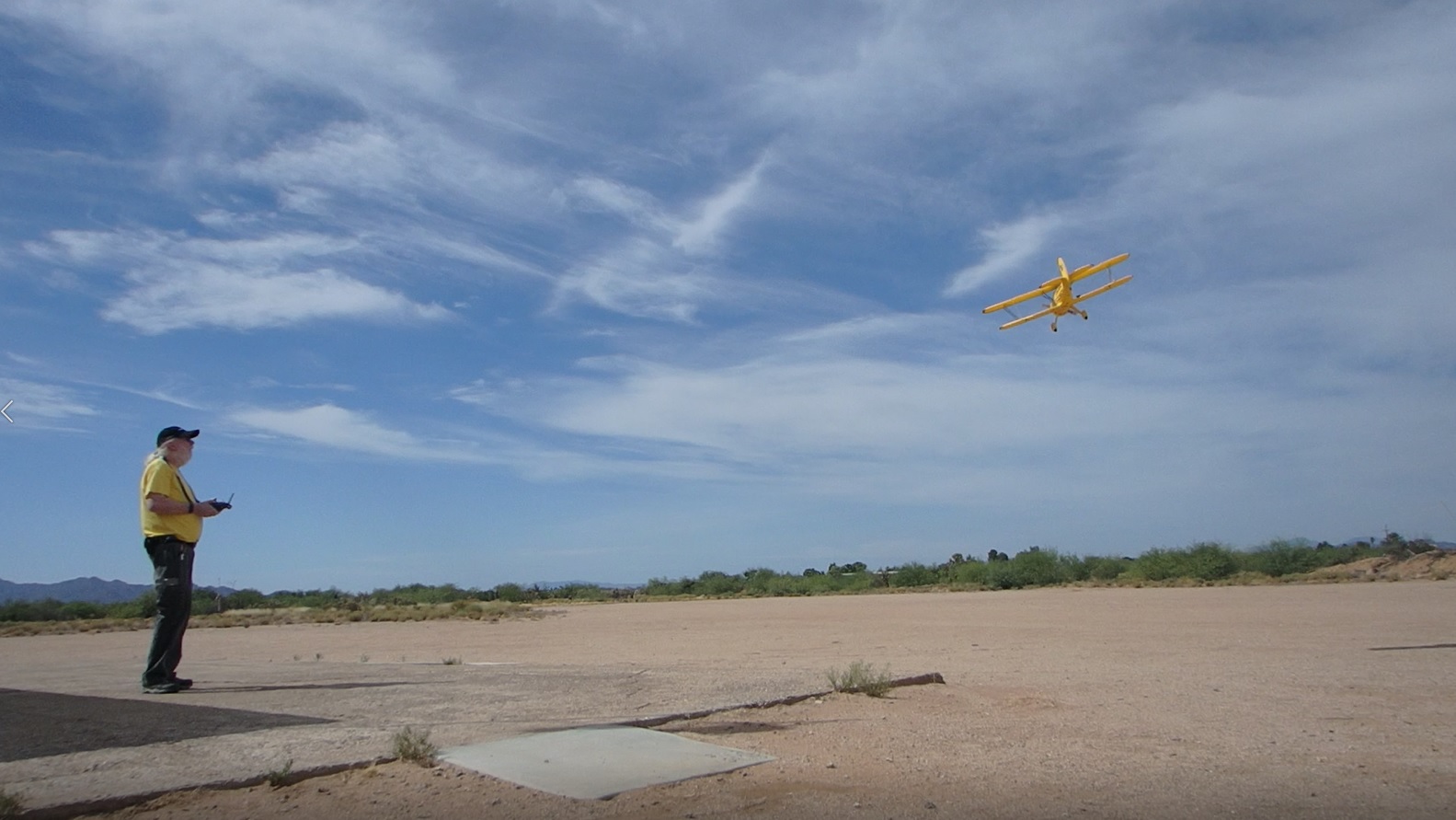 #154
Here we go - from the plane camera view after the flight. 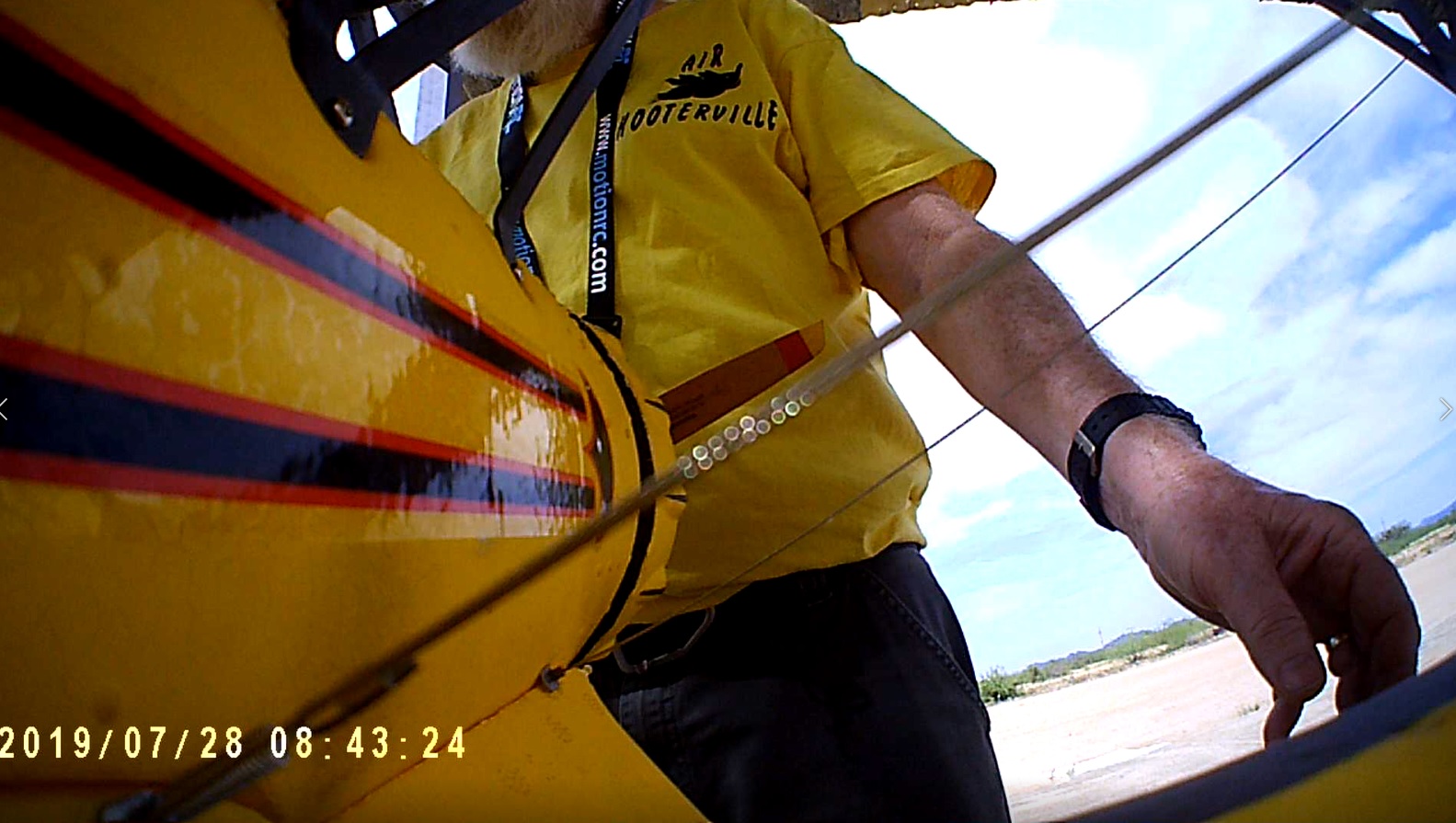 #155
One flight on each of these, though the Calypso flight was cut short, after I noticed an odd buzzing coming from the motor at full throttle. I think the motor is getting worn, as it seems the shaft pulls forward and starts vibrating at full thrust. Around 95 degrees at the field when I arrived, and just over 100 when I left, with intermittent gentle breeze. Other than being warm, couldn't have asked for better flying conditions. 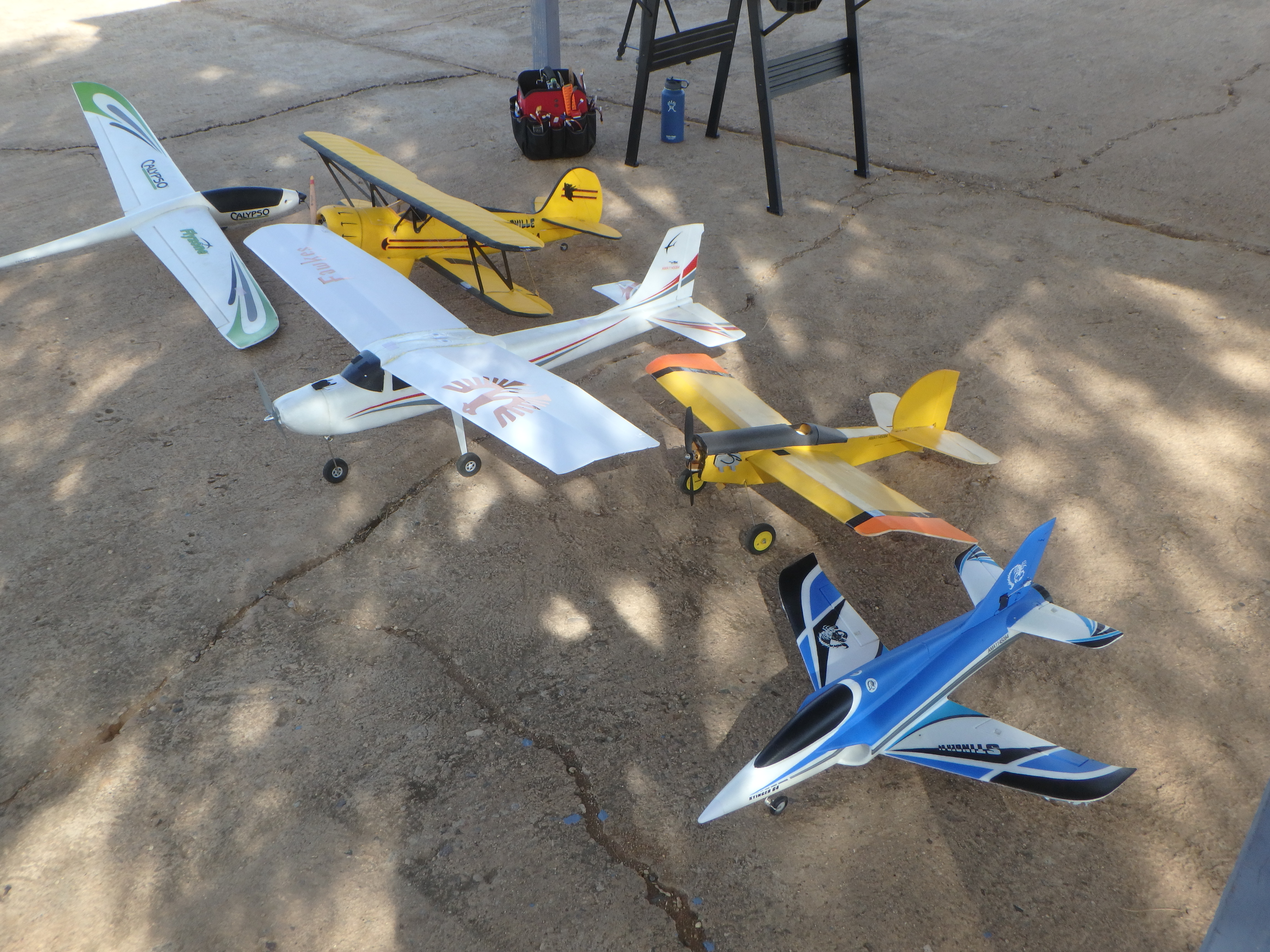 #156
At Edgewater for FPVFest. Have flown:

Mad Crusher does not have a low end at all, so only one tuning run. Unsuccessful.

#157
Some additional shots from this morning, starting with one of the Simple Scout flying over. 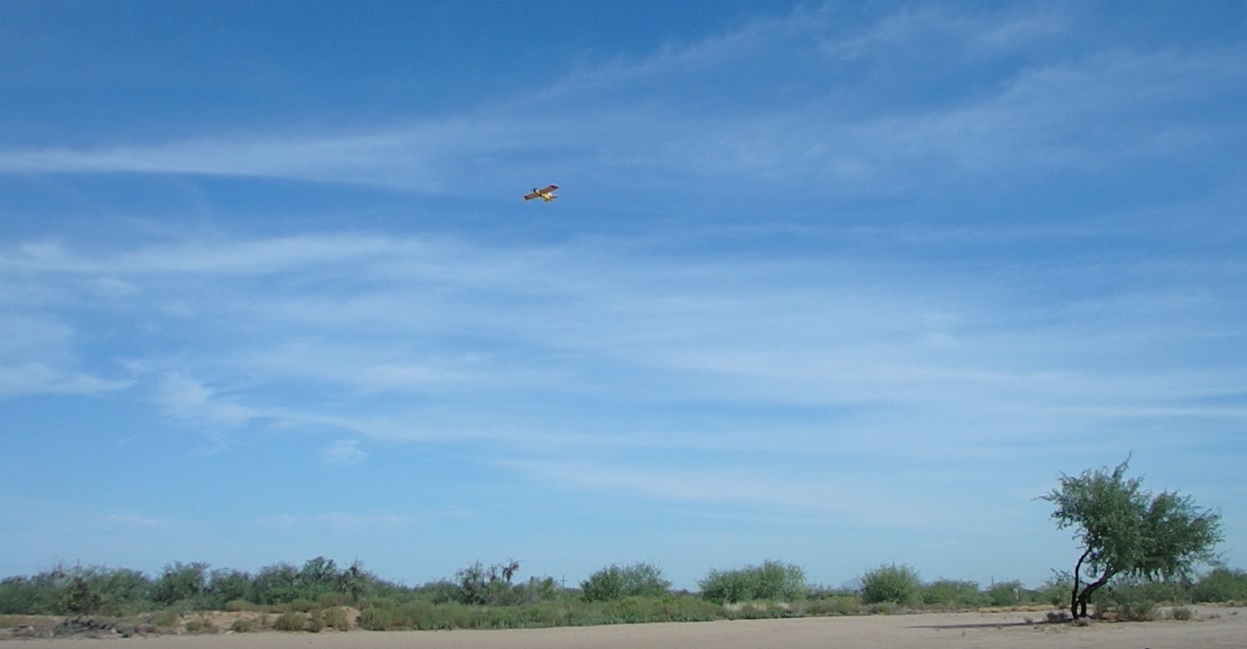 Next, the Stinger in flight. 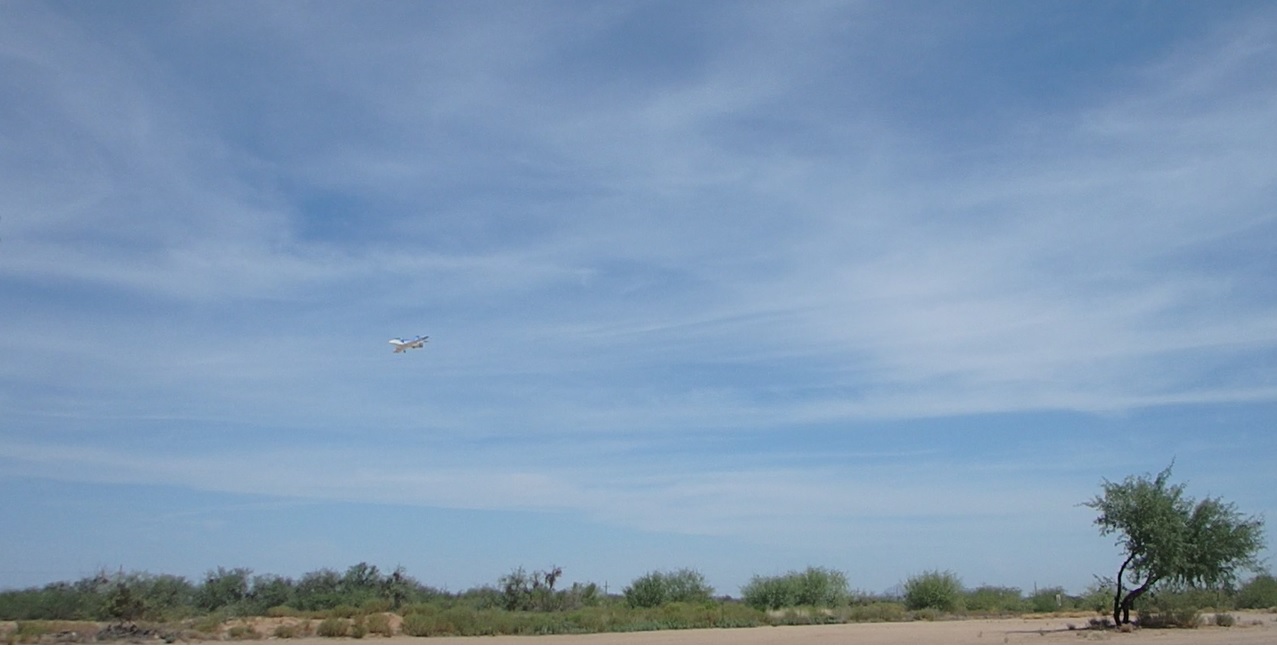 View from the Scout on high pass approach. 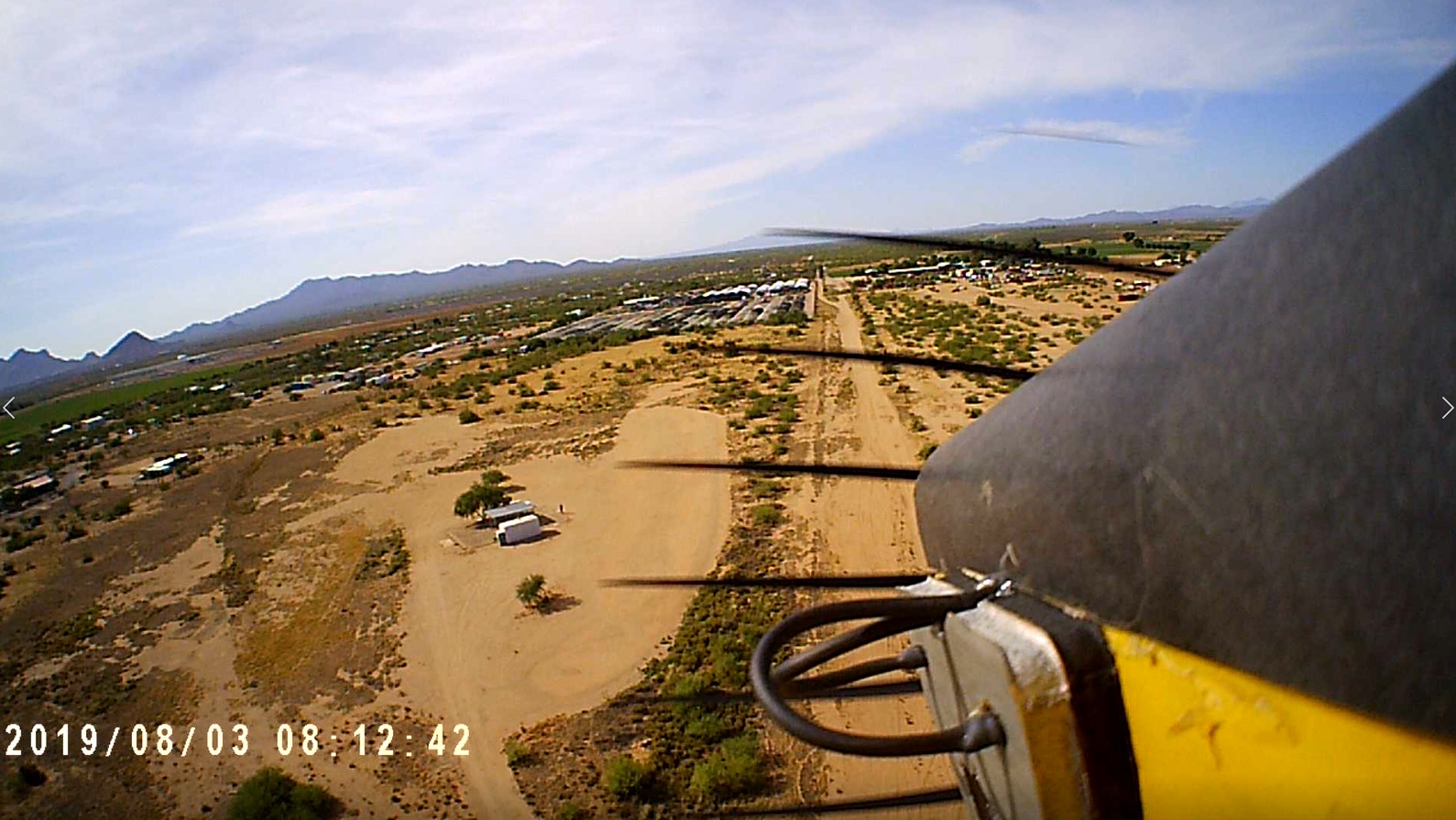 Looking from the front cockpit on Air Hooterville, with her shadow visible just off the wingtip. 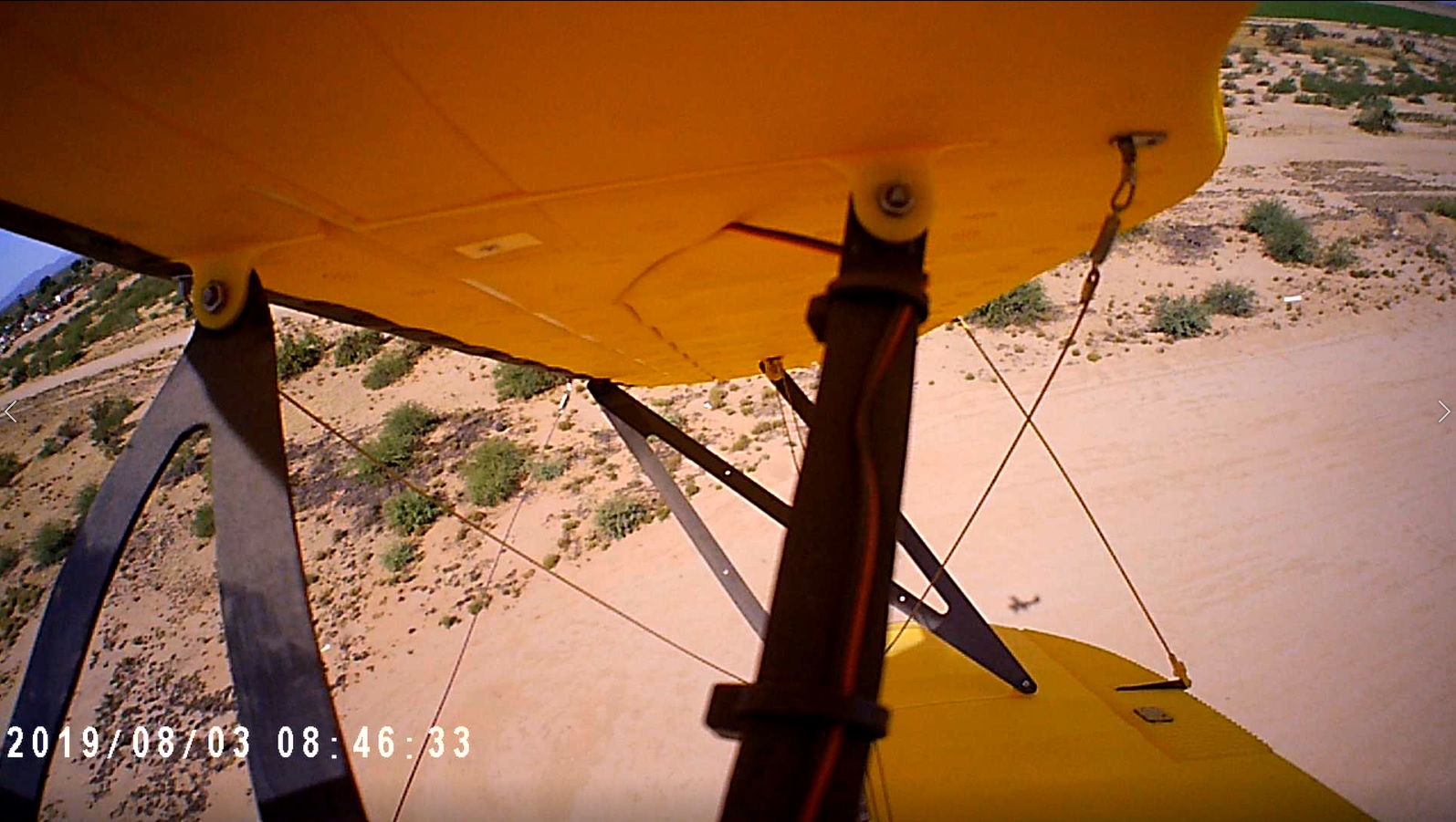 Field thermometer at about 8:50 a.m. This is, after all, Baja Arizona. 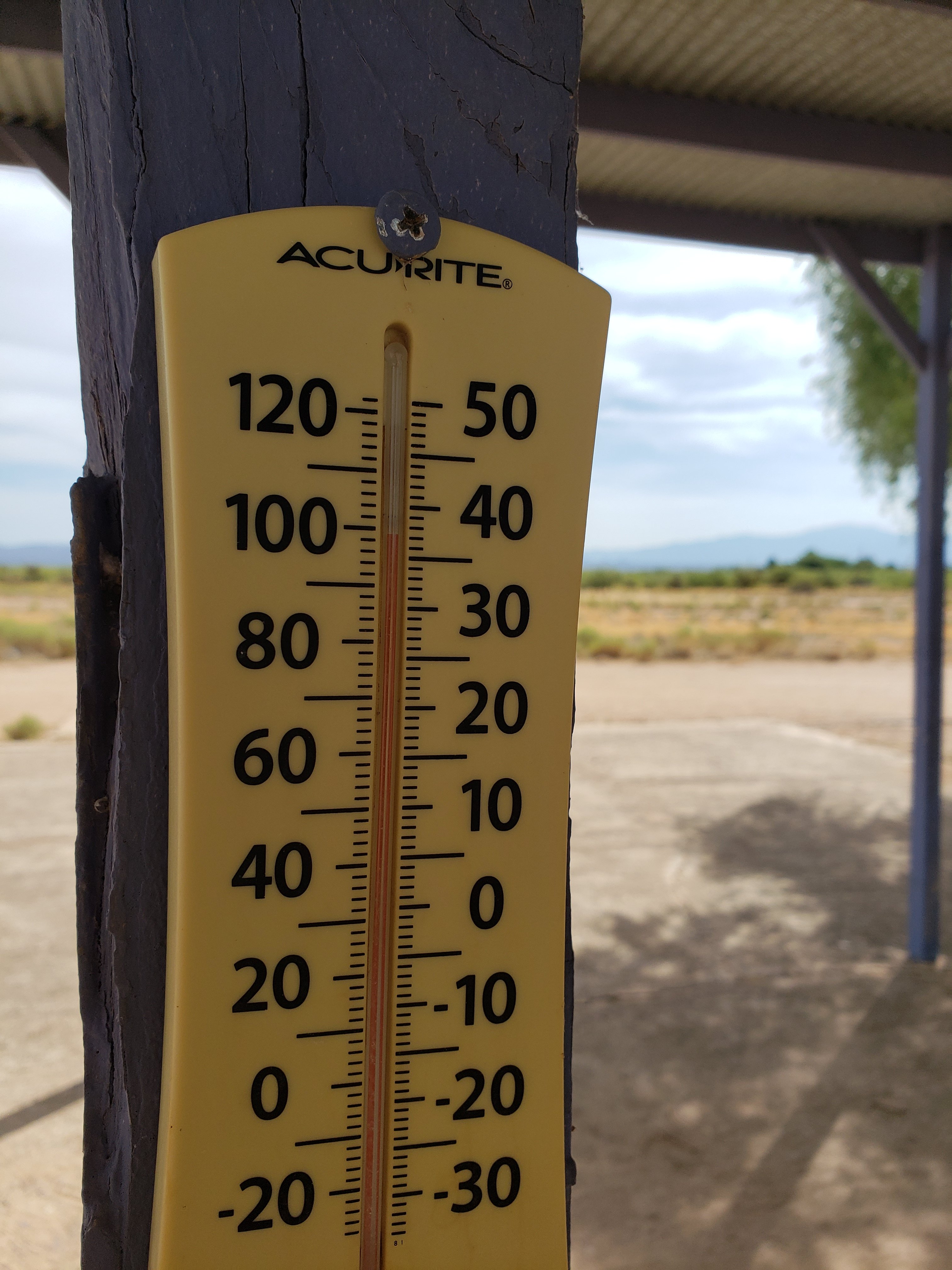 Air Hooterville, on final for landing. 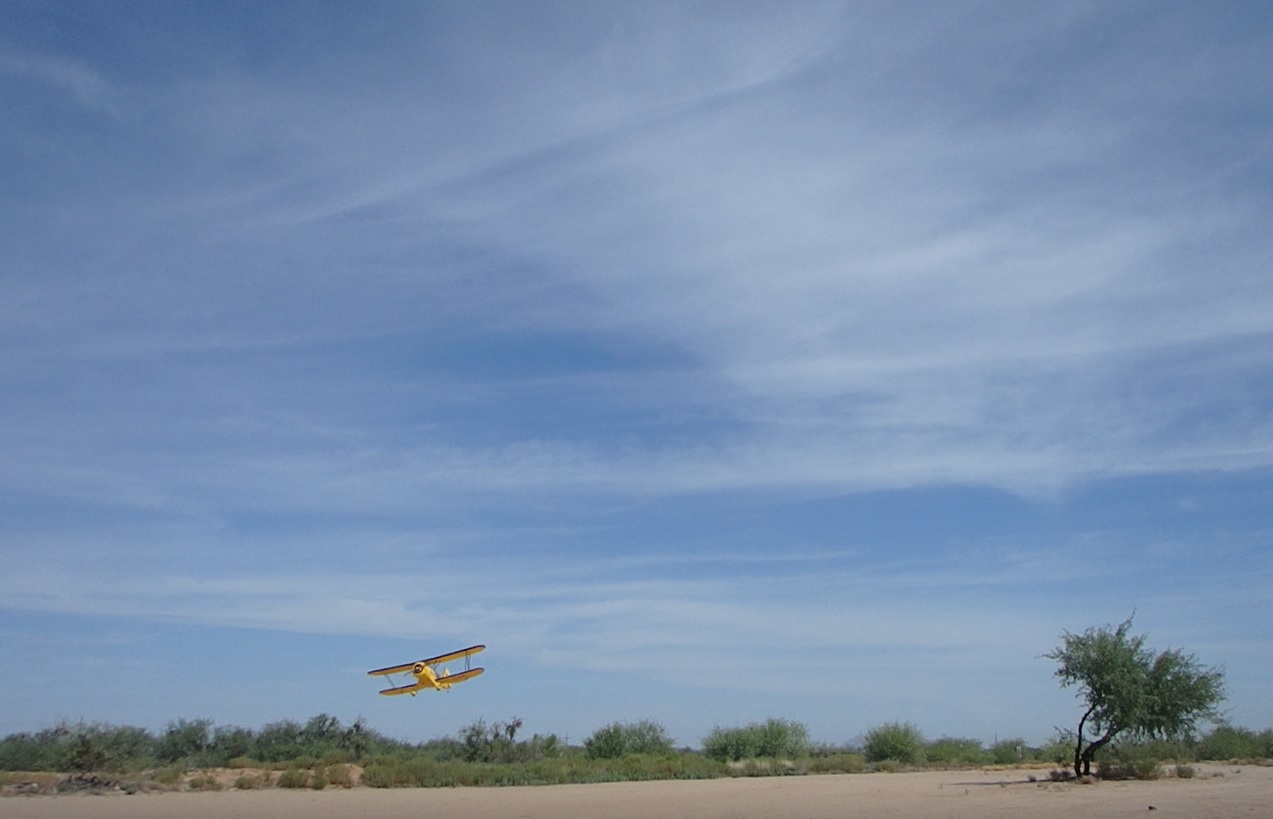 #158
Does this count as flying? I was at Throwdown in the Sound and crashed my MXS, and a guy there lent me his for the weekend. I also got lots of low hovers and some tail touches on my yak. 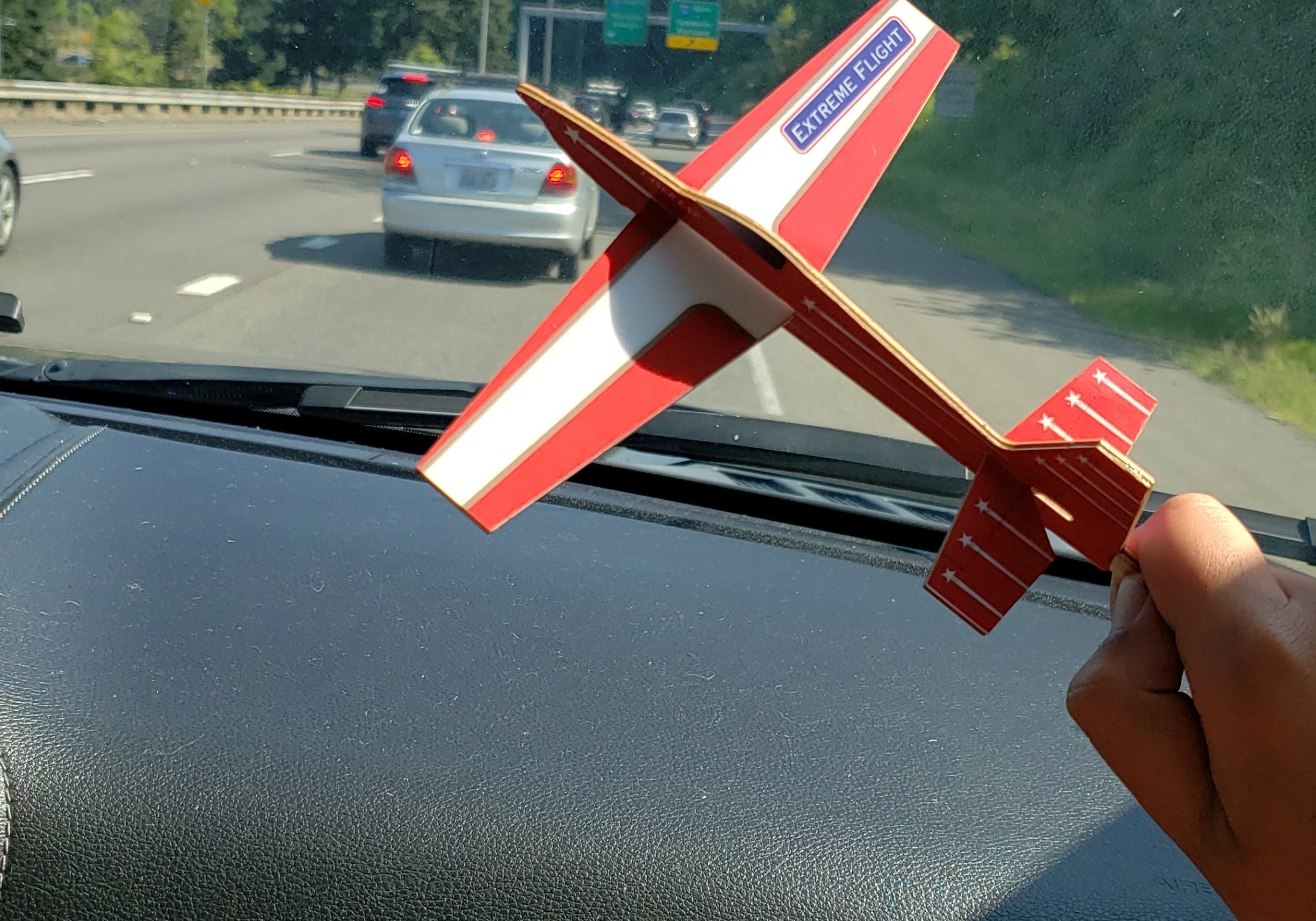 #160
Well slow to posting my flights but Thursday finally another day of Combat Wars, always great fun. 3 planes to repaire but being Sunday they are already done and ready for battle again. 5 rounds of battle, 3 planes to repair but 7 kills which was 3 more then anyone else. My point lead keeps increasing
You must log in or register to reply here.
Share: Facebook Twitter Google+ Reddit Pinterest Tumblr WhatsApp Email Link
Menu
Log in
Register