(also in the attachments at the bottom of this post)

SP0NZ has been pokin' at me for quite some time, "when are you gonna do an F-16!?" .... so after the Valkyrie project wrapped up I figured it was time. Surprisingly the design came together fairly quickly.

One main design constraint I gave myself was that I wanted to simplify the controls. After designing the F-5 and F-20, both of which were 4-servo jets, I knew that was too much. It's doable, but it's also annoying to set up.
So for the F-16 I challenged myself to try using elevons on the horizontal tails ONLY. I could always add ailerons to the wings later if necessary, but if the elevons proved to give enough control then great! (spoiler alert: they worked!)

Here is a progress shot from the first weekend working out the design:

Here are a few shots of putting the first one together:

And here's the first prototype assembled:

You can see the elevon servo wires snaking on the outside. I completed the build before knowing exactly where I wanted to put the servos.

About a week later the first prototype took to the sky:


If you can believe it, I didn't need a single click of trim; it flew awesome!

After a few test flights I determined it was a bit nose heavy, and I couldn't shove the battery any further back, so I went to the drawing and moved the EDF about two inches aft. That gave me enough headroom in the airframe weight to put the battery in a comfortable place and get the CG that I wanted.

THEN Flite Fest Ohio 2018 was looming ahead, so I decided that would be the perfect place to unveil it to everyone:


Something about this design just, "clicked". The A-4 Skyhawk is my favorite little jet - it's the first jet I can remember seeing when I was a kid, and my dad showed me the Blue Angels "Dreams" music video from the 80's - but this F-16 is stealing the show right now. It's more aerodynamic, has a better CG balance, simpler servo setup, and just performs better all around. Yes, it's a bit more involved to put together and it takes one more sheet of foam (5 vs. 4), but it's SO rewarding! And it's SO fun to fly!

SP0NZ will be reworking the plans, making them readable for everyone, and I'll have a few select builders checking them too, before releasing them in the wild. I have a bad habit of sending out plans and IMMEDIATELY finding something I need to change. I may release a set of beta-plans, after I get some more eyeballs on them, but please be patient in the meantime regardless. No one wants you all to start playing with this jet sooner more than ME!

Finally, here are the specs:

#2
Yay! Another great plane from you!
M

Subscribing to the thread in anticipation for the plans!

Mentor
#4
Really a sweet airplane. Ben let me fly the brown one and let me tell you, I've never successfully flown an EDF airplane. This one is an absolute PEACH to fly. It's a simple point and shoot flier but it has every subtle shape to really make it a true F-16. I'm not a Jet person. If it is any sort of indication of how awesome this airplane is... I WILL be building one, with none of that silly paper stuff.

#5
Awesome build Ben, great job!
It looks like a great flier as well.

Saw these at FF and they are simply Amazing!

Will we get the skins too? Might like to see an early two tone grey camo (or maybe just an image with the panel lines and we can make our own.

Staff member
Moderator
Mentor
#8
@Mid7night I can't thank you enough for taking on this challenge. Yes, the A-4 Blue Angles were fun and I really enjoyed flying them with everyone. However, as soon as I took the sticks on the F-16, I almost didn't want to fly the A-4 anymore. Guys, the Viper is a game changer! I can hardly believe that it is flying on the same power setup as the A-4. The aerodynamics of the F-16 vs. the A-4 make a huge difference in flight performance. From take-off to landing, the Viper is so easy to fly.

Ben actually built two Vipers at Flite Fest for me to take home after the event. I gave Keegan the brown one for all the work he put into helping me build the A-4 Blue Angels. While I knew about the F-16's development prior to Flite Fest, I had no idea Ben talked @Rasterize into creating the USAF Thunderbird graphics for me while he was also working on the Blue Angels graphics. It goes without saying that it was a huge surprise and an amazing gift.

A very heart felt thank you @Mid7night and @Rasterize for doing this for me. I love it. 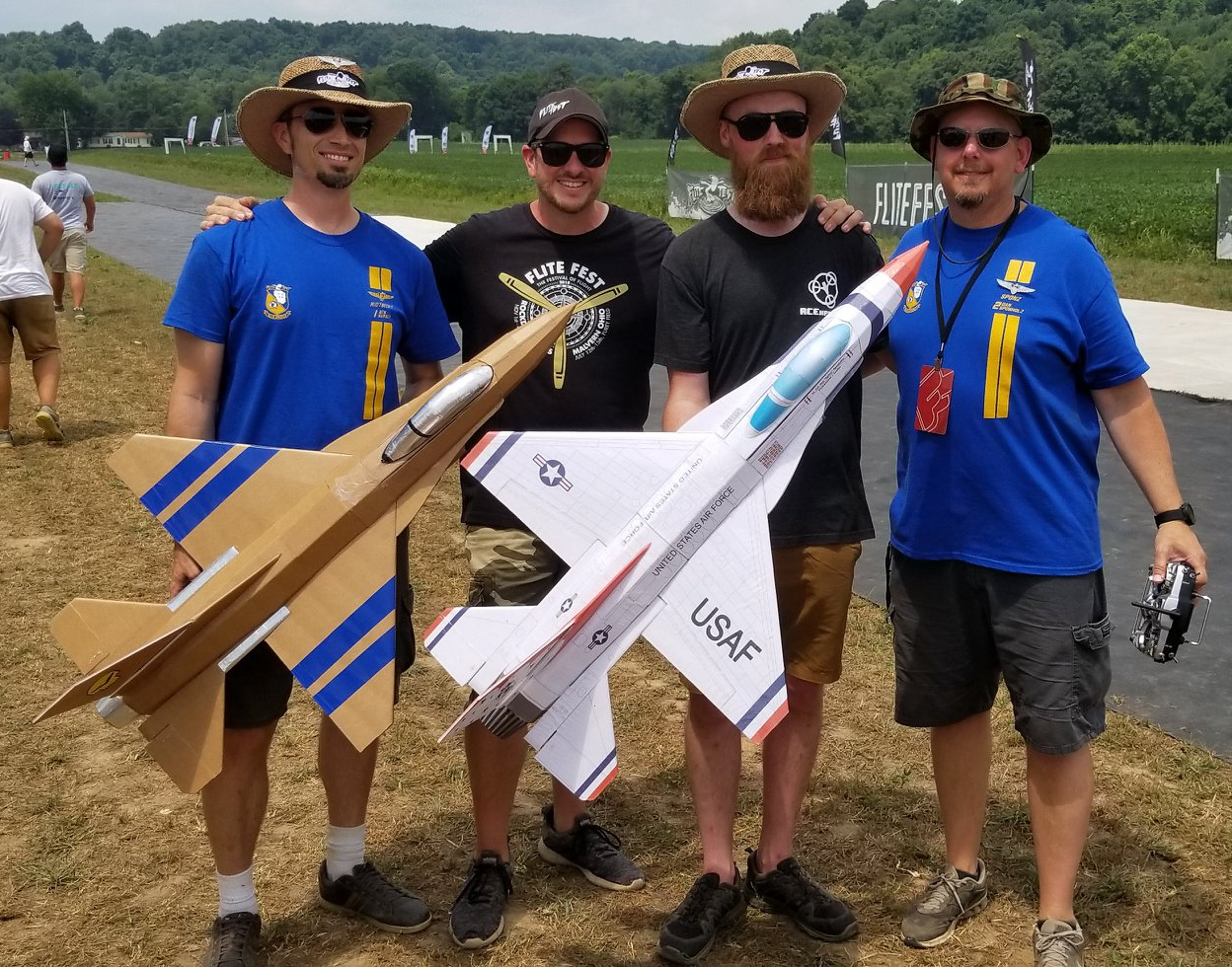 keeping it quiet until you unveiled was harder than i had expected. this is one seriously cool plane and all i wanted to do was take pics and show everyone.

now i guess i can.

Saw these at FF and they are simply Amazing!

Will we get the skins too? Might like to see an early two tone grey camo (or maybe just an image with the panel lines and we can make our own.

Click to expand...
Rasterize was going to do an aggressor skin for ours, but frankly i think i'm too impatient and will just do a NerdNic tissue paper camo job. i have the 70mm edf just waiting, why not finish before i have to go back to work?

we will see, hopefully i will have time.

Seriously though, if someone has the panel lines already done, I would be willing to work on the grey scheme.

Mentor
#12
i still have a 70mm in my old busted viggen. Looks like a great new home.

#13
This is an awesome build. It is probably going to push me to finally build an EDF. I also prefer the A-4 but this just looks so good and the flight reports are really selling me on it. Are the plans done yet? Can I get the Thunderbirds skins too?

Lol, no rush. I am so far behind on projects I want to do. I still haven't scalled up my skins for your enlarged Bugatti.

Now how do I subscribe to a thread on this new board?

#14
Allenhat said:
Now how do I subscribe to a thread on this new board?
Click to expand...
Near the top of the page (right hand side) you'll see a watch button.
However, now that you have posted to the thread you'll automatically get updates. (you should see the "jump to New" and "Unwatch" buttons now.)

#15
rain out today so no flying. guess i will work on this instead... 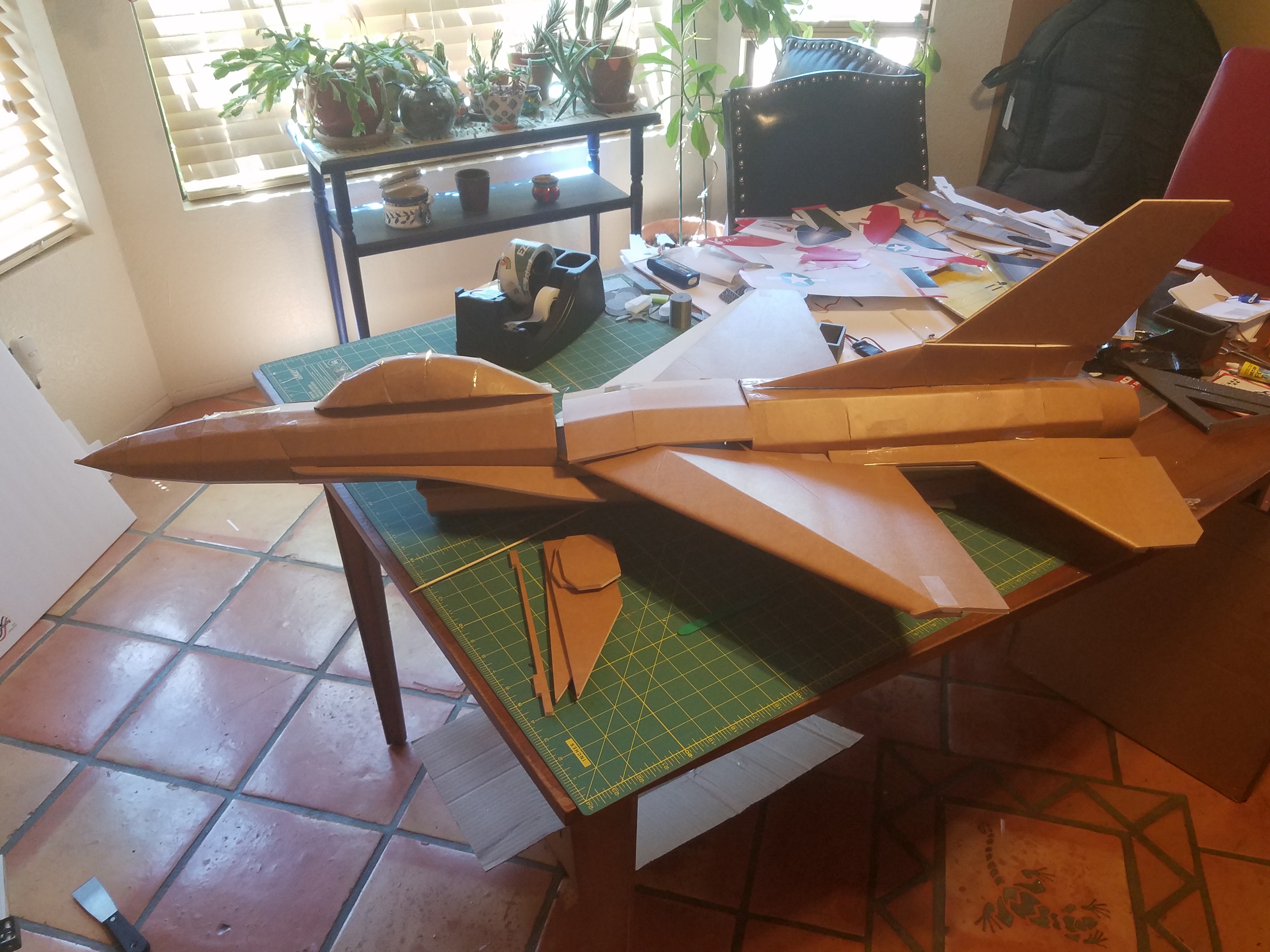 currently "taped" together so that Rasterize could visualize the Thunderbird skins for Ben's plane he unveiled at FF. just need to un-tape, add electronics, and glue back together.

#16
So... I kind of had a squirrel moment the other day if you didn't see my fb post. Set the viggen down behind the truck to talk to a guy that showed up with a gasser. Suffice it to say I'm in need of a new jet! Least I can laugh at myself over it. Also feel better that I didn't crash it this time. Definitely interested in building this so if you need another beta builder let me know Ben. Just message me on fb. Oh, this is Aaron btw....

#17
This is the good stuff look forward to building and flying this great job on design. Loved watching it fly at Flite Fest.

Mentor
#18
mrjdstewart said:
rain out today so no flying. guess i will work on this instead...

currently "taped" together so that Rasterize could visualize the Thunderbird skins for Ben's plane he unveiled at FF. just need to un-tape, add electronics, and glue back together.

me
Click to expand...
With the version you have, FYI: IF you can, try and move the EDF mount position AFT by approximately the spacing of the mounts. i.e. The Rear EDF Bulkhead becomes the Front Bulkhead, and move the front to become the 'new' Rear and trim as necessary. This will help get the CG in the right place without having to shove the battery all the way back over the wing.

Also, inside the main body there are stiffeners that go under the wing (the two large slanted pieces): ONLY ONE is required, and it goes on the centerline.

Hope that made sense.

#19
excellent. i was going to ask you about a few things;

i was all fired up on this today until i realized i really didn't have enough info. it also took me a lot longer to "un-tape" the plane than i thought. guess i did a really good job.

i also went out and got some paper for the camo job and wasn't sold on the colors. so, i will grab the brakes on this for a bit until i'm completely ready. still plan on having done in the next 2 weeks if possible.

Mentor
#20
First off, THANK YOU! Thank you all for your warm reception of this design, it's great to see people get excited for it. I can't possibly tell you how hard it was to keep my mouth shut about it until Flite Fest.

2) Battery gets 'wedged' on top of the wing, under the center/back surface. This is also being addressed in the new plans.