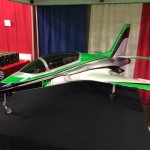 Chris, Mike and Adam make the yearly trip to Toledo,Ohio for the Weak Signals RC show and discuss what caught there interest. Andre also joins the group and since we had a few good flying days listen to see what happened and who crashed what. - See more at: 111 Weak Signals
C

#2
Does anyone know the name of the 1/5th scale car that had wheel motors on it? I'm very curious about that.
Chris, do you still do any R/C Car stuff? I got into that recently as well, it's fun to do on windy / wintry days.

#3
crash bandicoot said:
Does anyone know the name of the 1/5th scale car that had wheel motors on it? I'm very curious about that.
Chris, do you still do any R/C Car stuff? I got into that recently as well, it's fun to do on windy / wintry days.
Click to expand...
The company was Tidnab Innovations and it appears they have a Facebook page. I do not know the exact name of the car in the picture though.

#4
This one caught my eye on Friday morning. I'm lovin' that wood!

Really enjoyed the trip. Spent more than I intended. LazerToys sold me a tiny little Nutball I likely won't use until next winter indoor flying, and Model Aero talked me into a Polaris SE in Blue Angels colors by not saying a word and just letting me look. B*$tard$.

Since SWMBO has been out of town for a few days, I took advantage to use the table to get things started.

It's actually looking much like a plane now. Installing electronics tomorrow after I relocate back to the basement She will be home in the afternoon.

#6
I'm surprised mike doesn't have a fake laugh so he can go out all incognito.

Mentor
#8
Just finished the podcast this morning - always entertaining guys! I'm very interested in the upcoming tri-copter discussions, and hope there will be some comparisons of the mini-tri to some of the older and larger tri-copters he's designed. I have all the parts to assemble an "old school" Flight Test Electrohub style tri-copter on my project stack, with the idea that once I get some experience with the big one this summer I'll eventually move on to David's mini-tri. Tips, tricks, and advice always welcome.

Admin
#9
Love my 2.5 Tricopter. Actually strapping on a boardcam so I fly the tri via FPV again.

today I maidened my FT arrow. (SPOILERS: I'm gonna have to rebuild it) and while walking out to the field, the whole time I was talking myself through how I would do a thorough pre-flight. I look at it and everything held well. this was going to be my first FPV experience, too, so add another 80 dollars of FPV equipment. I had to reverse the motor leads, it was spinning the wrong way. then I made sure all the control surfaces worked, only worked, but not in what direction. So I go and throw it, it threw really well at about 3/4 throttle. that's about all the good of that throw. it wiggled, I countered, it kept it up until it was about 45 degrees in the roll axis, so I decided to gain some altitude. I pulled back and increased the throttle a bit. it nosedived from about 10 feet up. I had a camera in the front of that thing, no protection, nothing. it survived that, thankfully. All I could Diagnose is that the ailerons were reversed. I didn't notice the elevator. I threw it again after fixing the ailerons, and it got about 5 feet further. I looked at the elevator controls while walking it back and noticed that it was going the wrong direction. I reversed that, and by this time, it had developed a few creases, in such a fashion that it would bend the wing tips down when I pushed down on them. its a lot better than up, so it probably will work. The battery wasn't velcroed in, so I used a few rubber bands for friction in the fuselage and shoved it in there. this time, I launched it, fully expecting it to end my flying day. I was in a bad mood from that so I was pretty upset that when I pulled down my quanum 2's, there was a big fat "no signal" sign blinking on it. I had to scramble to push them up and land the plane. I bullied the plane into a steep glideslope, and it hit pretty bad. it was a semi-crash. by this time I was fuming with myself, about not doing my preflight as I had droned on and on about to myself in the car. I decided to move the camera back, and while doing that I discovered that the camera was unplugged. I plugged it back in, and decided to just put the camera back in the front. the nose was looking something nasty, so I straight up ripped it off and taped the camera in. this time I had everythign in order. trims were set, and I threw it. about 50 feet above the ground I nodded my head in order to flick the goggles down. went half way down. now I was 1/4 line of site, 1/4 FPV, and 1/2 in a black room. oh good. I went to climbing power and kept shaking and throwing my head around. It must've looked like there was a swarm of bees around me with what I was doing. finally it slipped over fully and I experienced my first FPV flight. 45 minutes of trial and error, and 5 minutes of pure bliss. that was my day, and I wouldn't have it any other way.
You must log in or register to reply here.
Share: Facebook Twitter Google+ Reddit Pinterest Tumblr WhatsApp Email Link
Menu
Log in
Register