Admin
#1
I've been slowly building up my ground station.

First it started off with a DVR unit. (Portable DVR for FPV)
Forum conversation.

Then I picked up a Quanum DIY FPV Goggle Set. I never indeeded to use the set as goggles but rather a monitor for my spotter or me.

The combination was working well but it did mean I had to have a wire coming off my goggles.
That is fine but recently my son was wearing them and almost took out the whole ground station when he turned.


So I put in an order for the cheapest FPV 5.8GHz receiver that could work with the FatShark frequencies.

- Simply testing to see if the system works.
Yes indeed. 44 is my number.

- Lets get wiring. I designed the whole setup to come part.
With this in mind I added a JST connector to the ESC +/- ports to power the RC320.

- The view from the new camera and Quanum-DIY-FPV setup.

- A nice feature is the RC-320 has dual AV out. 1 runs to the monitor and 2 runs to the DVR.
I found the DVR slow to boot so if there was ever a power bump I could be left without signal.
If I need to view the DVR I just need to swap the RCA wire.

So now I have a independent ground station and a back up for my FPV goggles.

Side note the connector for the ant/port is opposite to the FatShark gear.
So I can not use any of my current antennas.
(Antenna type: Receiver port RP-SMA jack, Antenna port RP-SMA plug)

Mentor
#2
I noticed this on instagram. I liked your idea of removing the lens and did the same to mine. I than hot glued a 1/4 20 nut into the bottom. Now i can set it on any camera tripod mount. I happen to have a nice articulating c clamp mount. 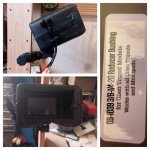 I was flying my Quad on Sunday with my setup while I son used the goggles. Works well.

Not a huge display but does not have to be.

Mentor
#4
That's what i was thinking to. I can just set it up and if anybody walks over i can tell them to go look at the screen and not have to take my goggles off or come back and land.

Also thanks for the posts about that G-osd. Hobby King has a ton of stuff and i have been all over that store and never seen that unit. Looks like a great deal. Especially as every store is back ordered on the Eagle Tree Vectors. It is strange that they didn't include RSSI in the more expensive unit. But not a deal breaker as my frksky accst unit is really nice about beeping when i am getting close to losing signal. Hasn't failed me yet.

It is really interesting having all of us exploring this stuff in our own ways. Everybody is coming up with solutions that nobody else has. I think in a way its because a lot of us don't have a person showing us how it "should be done". Lots of mistakes. LOTS. But also directions that would not have been taken. And occasionally work

Admin
#5
Or if I don't want to use the goggles I can just grab this setup. I'm really happy with it being wireless now.

The RSSI feed back off the LRS stuff is nice. Wish some of that was on my 2.4 kit.

Now the fun part is I suspect with U-OSD which is a firmware, I could feed the RSSI into V1 on the OSD board and measure the voltage 100%=3V and 0%=0V. So easy to deal with.

Once I've tested that... Just impressed with the little gps picking up data in the basement.

Admin
#6
Really happy how this turned out.

#8
Now that's a sweet set up. You mind running down a parts list with where you got them? I've been looking at building a cheap ground station and I think this fits the bill very nicely.

Admin
#10
If I'd changed anything naturally it would be to get a receiver that had antenna diversity but they cost a fair bit still.

#14
How do you prevent that lid from smacking down and closing itself in windy conditions ? Where i live it is always windy and hence i always consider stuff like "will the wind blow my tripod down ?", "what if the tripod tips over will i lose my plane ?".

Admin
#15
Most time I'm flying with my goggles on.

Lid wise fashion a stick.
Tripod wise get a sandbag.

So for 2016 I managed to check off an item on my list right away.
I picked up a used FPV 7" LCD Monitor with 32CH Diversity Receiver for a very good price.

Originally I was looking for 10" monitor and use my dvr and rx to drive all of that but the price on the used 7" was too good to ignore.

The 32 channel receiver and DVR are now wired directly together.
They can run independently of the whole setup but I can run a cable out to the monitor to verify everything is recording.

Changes:
- Moved the top panel back, simplified the wiring and maximized the storage for all the fpv I take with me.

The case can setup in the car with an extension cable for the antenna or on the ground beside monitor/tripod.

- Setup for transport, just move the antenna and go. 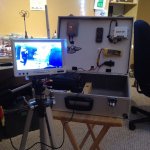 Hey Andre, if you take that 4.3 inch monitor out of the plastic its about 1/8th inch thick and means you can mound it flat. Also heres my newest ground station. i used basically the same setup as you did except used a smaller box and computer fan to cool the FPV reciever which i took out of the aluminum case.


Hey Andre, if you take that 4.3 inch monitor out of the plastic its about 1/8th inch thick and means you can mound it flat. Also heres my newest ground station. i used basically the same setup as you did except used a smaller box and computer fan to cool the FPV reciever which i took out of the aluminum case.
Click to expand...
Nice roover

I actually use the googles now my son.

Mentor
#19
I wanted to redo my setup so i decided to try the "everything attached to a tripod" look. I have a couple square sheets of ABS plastic so v1 is just a rough cut working mock-up with over sized holes and hot-glue/Velcro to hold everything in place. It hangs on the V of the legs with velcro straps. Still have to add a eageleyes diversity on it somewhere to get my dvr in line, but pretty happy with the convenience of this setup. Collapsed, like the picture, it sits happily in the back of my jeep. To setup i just drop the legs, connect my cabled goggles, and put a battery on the Velcro. I have it setup with power switches so i can turn on off the 2.4 rx, 5.8 diversity receiver, and the automobile USB charger. Eventually i want to add a 25mw 5.8vtx relay to wireless goggles, but this is working pretty great. I really like the cleanness of the cased setups but i always have a hard time trying to find a spot, where i fly, to set that at eye level, without bringing a table to set it on.