#1
Hi All,
Several year FPVer, short time Dock-King user. Over the past few years, I have been using a tripod mounted display panel with a hodge-podge of electronics slammed together with velcro, double sided tape, electrical tape, and several chopped harnesses soldered together. It has worked, but been sometimes unreliable, and not that pretty. I recently started thinking about ways to simplify my setup so I didn't have to move cables to switch between 1.3ghz and 5.8ghz. I also wanted a way to use my Furious FPV True-D diversity RX with my Fat-Shark Transformer headset. Started looking at Thingiverse and a few other places to get ideas, and a few people were trying to duplicate the FuriousFPV Dock-King. It really had almost everything baked in that I need with a nice plug-in for any Fat-Shark style RX, built in power, and a plethora of A/V Out ports. (4). So I picked one up on sale from RMRC. Appears they are selling off a bunch of stock from the FliteTest and Rotor-Riot stores. After a bunch of searching around, I found that the DVR module for them is no longer available. Fortunately Furious FPV was kind enough to share the pinout for the DVR port and I found a compatible plug kit at RMRC so I've been able to wire up an HMDVR and RunCam DVR modules to see which one I like better.

Here's the pinout with a nice pick of the back of the unit. The control pin should not be used so pick a module with a start/stop button. 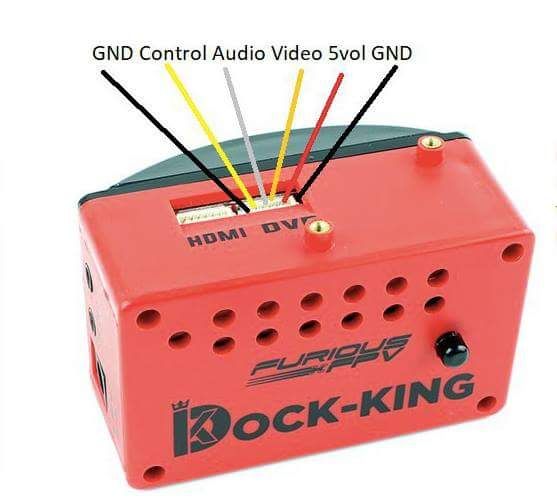 So far I've only been doing bench testing. Hoping to get it out to the field soon and get some pictures of it in action. Will also provide some video recorded from it and show it in use with both a 1.3Ghz tuner, and the True-D 5.8ghz diversity tuner.

Currently the latest firmware for the True-D and Dock-King are as follows.

True-D 3.9 (no longer need a D version for use in the Dock-King)​
Dock-King 2.8 (must use android or apple app to update over bluetooth)​
Cheers!
LitterBug

#2
Nice, just found the pinout for the HDMI port. It's analog out to a HDMI converter. Pinout is almost identical to the DVR port. Using it as a second DVR port will allow me to do concurrent recording for comparing DVRs from the exact same feed. 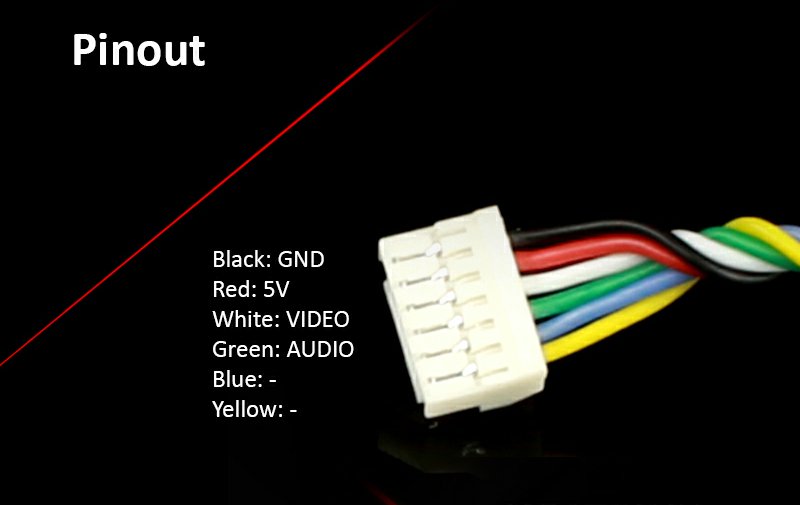 Did some initial testing out at the field tonight. Signal to my goggles was much better than what I have been getting. Need to set the HMDVR module up to the same bitrate as my old gear for comparison. (or just grab the module off my old gear) There are some quirks to the Video overlay that the Dock-King outputs. Seems that it is not always using NTSC even though I've configured it as such. Makes it somewhat tough to use with the spectator display panel for configuration since it doesn't autodetect the video format. Goggles autodetect fine, so it's not a big deal from a configuration standpoint. It can also mess up the DVR feed, since it doesn't like changing formats mid recording. Works fine as long as I start the recording after the initial boot screen.

#3
Here's a comparison of my old spaghetti system to the Dock-King:

The modular design makes it easy to swap out the RX modules. I have the quick release from my tripod in the bottom which makes it easy to break down or grab and go. There are strong magnets in the base which can be used to attach to many metal objects (fences, poles, etc...)

Four AV out ports. 2 4-wire jacks plus the HDMI and DVR adapter connectors. There is a built in 5V regulator that can be used for powering a DVR module.

The discontinued DVR module would be mounted on top. I'm using velcro to mount the modules on the back where I can reach the buttons and see the status light.

Boot screen for the Dock-King itself 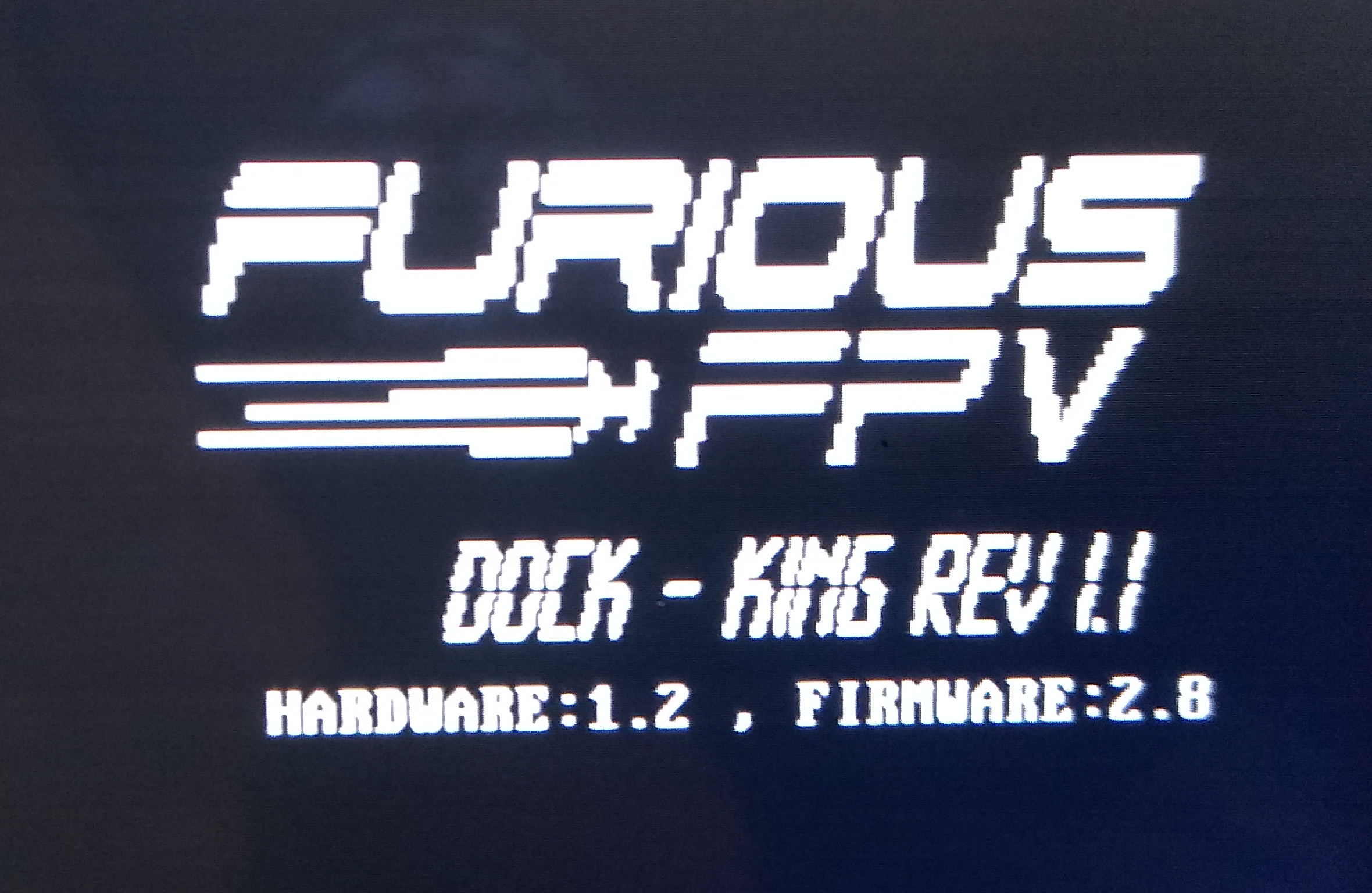 Tis tha borg checkin in til my real account gets assigned new credentials.

I have a spare cable so I can "share" my output with a passenger too.

#6
I have the Dock-King OSD configured for minimal but effective reporting. I've aligned the RSSI just below where I put it with my vehicle's RSSI in the upper left corner. So in the picture below, My patch antenna has 96%, and omni has 50% signal. The 96 is highlighted, so that is the antenna currently being used. 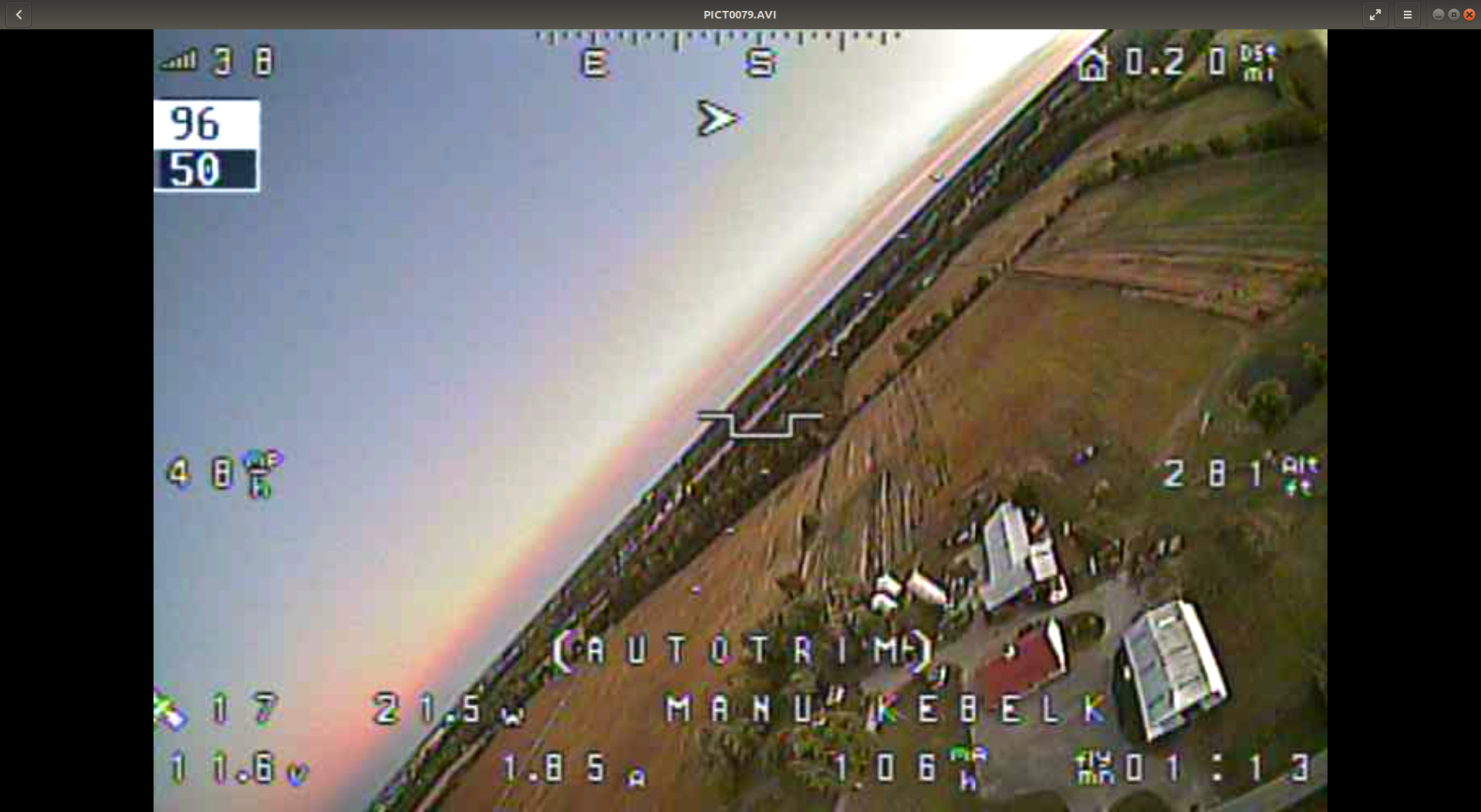 Here is sample Footage from a recent Maiden and autotuning session. You can see the RSSI change dynamically, and see when it switches between antennas. (warning LOUD)

#7
The video above was captured with a HMDVR. Since the Ground station has TWO DVR out ports, I have also tried using one of the RunCam Mini FPV DVRs to compare results. It appears to have a bug where the first video format it sees, is what it records in rather than determining the video format at the time recording starts. Causes video artifacts at the bottom of the video frame, and obviously, this can lead to incorrect framerates and resolution. 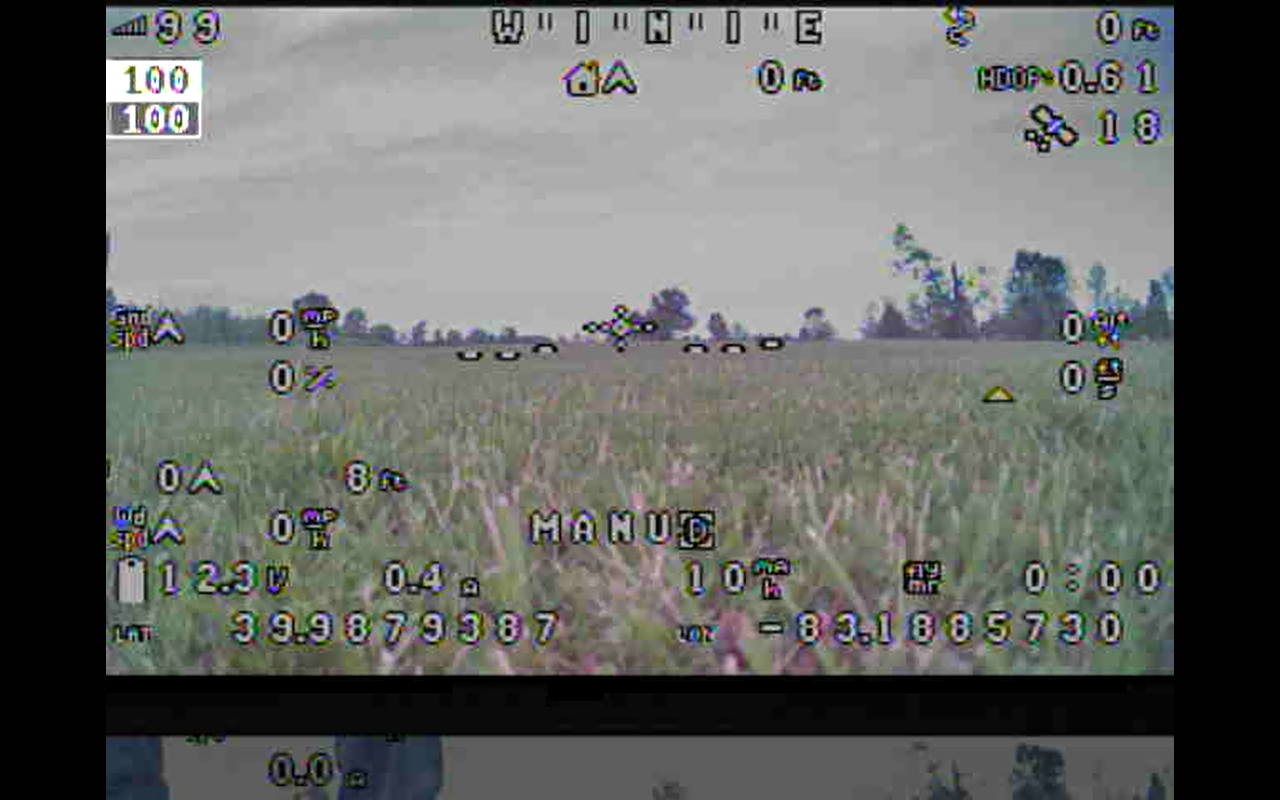 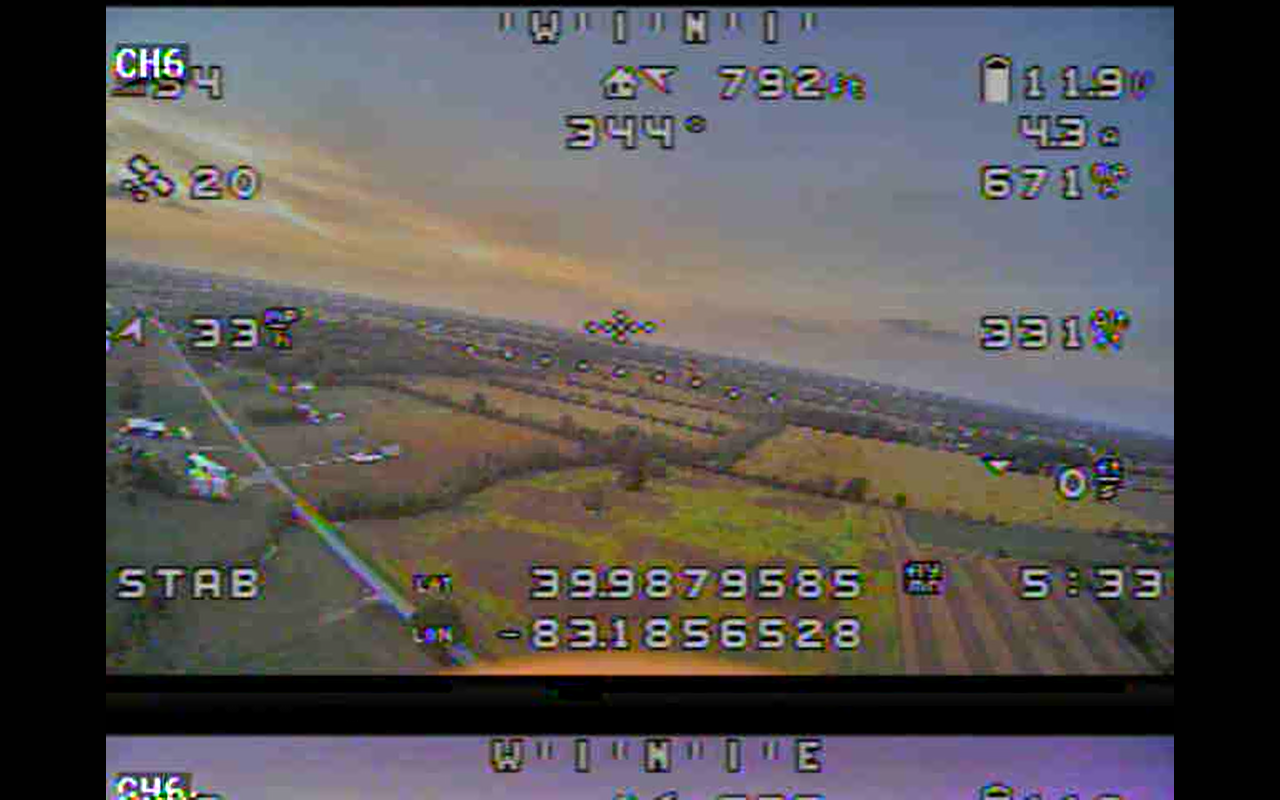 I've opened up a case with RunCam to see if there is a way to force it to always use NTSC, or if they can update the firmware to detect the video format at the time recording starts. The only other option I have is to plug in the RC DVR AFTER all my other gear is on and the NTSC signal is present.

#8
Had a major problem with the Dock-King this week... >sigh< AND it has been discontinued >S-I-G-H<. Twice now I've found a good product that FuriousFPV had that didn't have longevity. It failed to power up when I got to the field the other day. Was doing some troubleshooting and it would power up when I had a display plugged in to the same battery and I plugged the video cable in to the Dock-king. This led me to believe that something had failed on the ground side of the unit. I tried to file a "warranty" claim, only to find that I could get a refund, not a replacement. I LOVE the Dock-King. Sending it in was not an option for me, and I had a pretty good idea that I could get it working again by voiding the warranty. What is more useful? A working Dock-King, or a handful of clams with no great ground station solution.... Ok, scrape the warranty decal off and add another path to ground inside the unit. SOLVED!!!. Glad to have my ground station operational again. (even if it is a hack and I can technically no longer have a warranty)

FuriousFPV Does have a new Dock-King Lite on their web site, and it is considerably less expensive than the original. Not sure where that is going though, and it does not list my True-D V3 as a supported RX. May have to inquire about compatibility.....

EDIT: RunCam has been unwilling to budge on fixing the bug where the DVR picks the video signal format (pal/ntsc) at time of boot rather than the time that the recording starts. Really disappointing. Pretty sure unplugging and re-plugging the DVR while powered up may have contributed to the failured of my Dock-King. Need to add a power switch on the power wire of the RunCam DVR.... >sigh<
Last edited: Jun 20, 2020
You must log in or register to reply here.
Share: Facebook Twitter Google+ Reddit Pinterest Tumblr WhatsApp Email Link
Menu
Log in
Register