#21
Ahh yes.. Still thinkin like a drunken sailor.. I was thinking poker deck you guys think pokemon deck.. I shall be over here in the old guyz section eyeing my poker chips and thinkin papa needs a brand new pair o shoez...

THIS Jim is a Batflowbile..

FoamyDM this is ... a lot of work to share knowledge - but sharing knowledge is always a lot of work!
It looks interesting and i would like to test this game and hope you have rules, which I can translate into the german language.

Which software do you use for creating the cards? If you want my Publisher template file send me a pm. You can open the pub-file with Libre Office Draw, which is free!

Maybe we should omit the outside round corners, because rectangular cards are easier to cut. Which dimensions have your cards?

You would also need a card box - here is a suggestion:

#23
Cool, The Toaster Plane was another challenge type plane.

#24
The Kraken is the toaster plane right?

#26
FoamyDM said:
The Kraken is the toaster plane right?
Click to expand...
It was like the Kraken, but it had a W shape.

#27
AircPirateNinsei said:
... and this could be a card of the Batflowbile.

View attachment 89322
Click to expand...
AWESOME!!! Ty for doing that I know its not along the lines of your game pack but it is much appreciated you took the time to put that out.

Hi all,
I did a few play tests this weekend and worked out some of the major bugs, I think.
There are some mistakes or typos, but in general, this should be what you need to try it out.
There are 42 planes and 90 parts cards as well as 4 pilot plaques. These will need some tweaking.
Also if you don't have an 8-sided die at home, use a 6 and reduce the success numbers by one. and auto success to 6.

Please try it and tell me what you think.

My 8 yr old son gave me a great Father's day gift when trying it out he, un-prompted, told me,"that was so much fun! Can we try it again?"


Flite Test - the Card Game Rules.
&#8220;Fun, Flight and Community&#8221; ​
Objective:
Have as much fun preparing for Flite Fest and use collected community contribution points and helping complete the community build, maiden and challenges.

Setup:
Shuffle both decks and place the Part deck and the Aircraft Deck. About 4 cards apart. And layout four (4) piles of three (3) Aircraft Cards face up. This is your build inspiration pile. Discards from the build phase are laid out below the inspiration pile, the swap meet.
Every player receives a hand of 7 Parts cards
Decide on how many months (turns) until Flight Fest.

Sequence of Play:
Each month (turn) consists of five phases, Project inspire, build/repair, maiden, flight. All players do these actions at the same time.

Project Inspire phase &#8211; Pick an aircraft from the top of one inspiration piles.
Build/Repair Phase&#8211; replenish your hand to 7 from the parts deck of the swap meet and use the cards to build a plane you picked or build power packs to use with the builds. Parts are put fanned out under the aircraft card to note it&#8217;s build status. Power packs can be built separately and stacked neatly sideways when complete. Batteries can be placed next to the power packs.
Community Phase &#8211; each player may offer cards to help other players to complete their builds. Each card used this way give the giving player 1 fun point. When a craft is complete, the parts are placed in a clean stack underneath. At the end of this phase each player may put one card from their hand into the swap meet.
Maiden Phase &#8211; Completed planes may be maidened. A maiden success is on a 6+ and crashes on result a 1 - 3. On a result of 1 (or less) cause a spectacular crash that entertains the community, you to break 3 random pieces of your craft. An 8 is always a success representing amazing skill or incredible luck. Both a roll of 1 or 8 earn +1 fun point. Each successful maiden earns the fun points marked on the Aircraft Card, increases your pilot&#8217;s Build/Maiden skill level by 1 and allows it to be tried in the Flight phase. Also stack the part cards directly under the aircraft cards with the power pods sideways underneath.
Flight Phase &#8211; You may fly any maidened planes. A success is on a result of 5+. And a crash is on a result of 1 or 2. Each causing a part to be discarded. Each flight attempt increased your pilot skill level by 1​
Play continues for the agreed upon months (turns) until Flite Fest.

Winning the Game:
Whichever player has the most fun readying for Flite Fest has won.

Optional Rules:
PILOT preferences: each pilot has a plane preference and earns +1 fun during preferred actions.

just in case the link fails. at for looking over.

#31
Last note:
I feel this game captures the essence of what Flite Test as a company set out to do as well as what this community does by creating a supportive generous community where newcomers and old feel welcomes and appreciated.

my son exclaimed that we both had a lot of fun. as we notice the "fun" point totals were nearly equal as we tried each turn to help each other to complete each our planes and fly them. For those that try this game I hope the experience comes through.

Gods it's late... catch you later, and for those who could I hope you had a great Father's day.

#32
FoamyDM - this is awesome! :applause:
I will print the cards asap and test the game!

@AircPirateNinsei
print 1 of these per 2 players. I use these to track completed power packs.
Each player gets a set.

View attachment Power Pack SheetPrint2.pdf
I still have work to do to verify the sheet and servo counts and finish writing up a little something on each plane. As I only have info from the FT videos and stuff from the forum comments it may take a while, and I also want to type the planes:
put them in categories of WW1, WW2, Jets, Concept/fiction planes.
I also want to add three more pilots, one that adds an earns 1 extra fun when helping. (Josh Bixler) and one that earns 2 fun points for completing builds - like Localfiend, Nerdnic and you. and I'm thinking one pilot that gets an extra flight if he skips the build phase.

I guess the first things first, get a simple enough game that's fun.
My son loves it, and two other testers have enjoyed it. (They're the kind of friends that tell you about spinach in your teeth) the one plays Magic the card game, the other doesn't but isn't afraid of Settlers of Catan. both know nothing about flite test and RC planes.

#34
For anyone who gives this a try, please let me know your thoughts.


I've noticed organization becomes important as there are a number of moving parts on this and my rules currently offer no suggestions.

Unfinished plane parts fan out underneath. When complete (with DTFB and servos) The get stacked neatly underneath. Same with power packs, when done the parts get stacked neatly and stored horizontal (see PDF in previous post.). When the plane is ready to maiden, We put the power pack horizontal over the finished plane. That way we know at the end of the build phase they need to be maidened. Once the maiden's successful, I move the power pack under the plane, (the label on the Power pack card sticks out). This keeps it straight.

In addition, I put my builds on the outside, power packs on the right, planes on the left. They move to the middle, near the pilot, when they are ready to fly. Also I've used 12-sided die to track the pilot skills. A printed ft gremlin clip on the side of the pilot was the intent. I suppose you could use coins or glass beads to track this too.

I'm not sure the best method to track the fun pts either. So far I've used dice, and score pad/tick marks. I wanted to try a score board next. I'm just thinking of the final product and would like to keep it limited to fitting in a small double deck-sized box. Opinions welcome here.

I also have ideas on FLITE FEST part to the game: Bring your planes and your reckless abandon. Time for some more building, flying, crashing, community and of course, FF FUN!

If you've followed my unbridled fervor this far thank you. Please try this out and let me know your thoughts.

#35
PsyBorg said:
AWESOME!!! Ty for doing that I know its not along the lines of your game pack but it is much appreciated you took the time to put that out.
Click to expand...
You're welcome!

Today two candidates have presented themselves to me:

I hope they meet your requirements! Otherwise you should change their favorites.

By the way: I have no 8-sided dice so i created one for DIY!

I also have to create a 12-sided die to track the pilot skills.

I created clips for the skills: 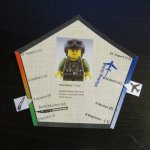 Amazing! I changed the pilot cards to 2.5" x 3.5" poker card sized. and I think it's a good thing. Those markers you made are perfect.
I went with an eight-sided for a larger range on outcomes. However I'll be trying it out with 6 to see If it's lackluster or not.
The FT Bot is GREAT.

Feedback is a gift!

I just take for granted that everyone has other-sided as I've always had a DND set: 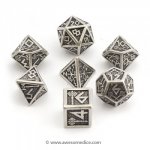 I'll take a PM if you want

Today two candidates have presented themselves to me:

I hope they meet your requirements! Otherwise you should change their favorites.
Click to expand...
These are great add. As the aircraft Deck is nearly all FT I think the bot is a bit overpowered right now. He needs to get used... but how. build bot? +1 to build/Maiden.

Also I was going to add on the reverse face, the real FT crews. Josh Bixler - (+1 to help others Build)
Stefan - (+1 to fun for every crash)
TJ - (+1 to build a and fly quads)
Josh Scott (+1 fun and adds + fly to all beginner and novice Maiden/Builds)
Peter Stripol (may maiden with one less component, or adds +1 for each additional component) - FrankenPlane
etc.

Not trying to miss anyone... just shooting off the cuff. Also thinking of leaning of the FTCC guys too... and RCAH.

Here is a suggestion for a monthly timeline with a slider - from 12 to "GO!":