#41
More progress:
Since I’m out of foam board, I started glueing up what I’ve already cut out.

I should be getting more foam board on Monday to do the outer fuselage.
Last edited: Dec 16, 2018

#44
Finished up the outer fuselage today:

Almost forgot to fit the canard in place before glueing the nose. Lol

And now, I present you...
The Starship Chuck-glider:

Jk... Actually, I agree! It's totally sweet!
So sweet that I'm a bit scared to chuck it and break it immediately... >_<

Anyone have a wind tunnel I can borrow?? Lol

#48
Seriously, it looks awesome. That is amazingly sporty looking. It's like a foamboard ferrari. I can't wait to see it fly.

buzzbomb said:
Seriously, it looks awesome. That is amazingly sporty looking. It's like a foamboard ferrari. I can't wait to see it fly.
Click to expand...
Yeah me too... Wing still looks small but we'll see.
I need to find a place with tall grass or something so i can glide test it without it getting smooshed on the first toss.

#50
Alright... I did the chuck-glide tests.
It actually didn't need any adjustments CG wise... I was not expecting that.

I did a longer distance toss after the one in the video and it flew straight and level, it seemed to prefer the faster toss, not surprising.
I was pleasantly surprised at how well it flew "out of the box".

Next I'll be making a few modifications to the design to make it easier to build and printing the new plans to build the powered prototype.
If that goes well, I'll release the plans.

#51
Change of plans!
Since the chuck glider prototype survived the glide tests... I'm just modifying it to accept the RC components.
No sense in chucking (pun intended) a perfectly good airplane.

So I've started getting the electronics wired and will be installing them onto this beast shortly. 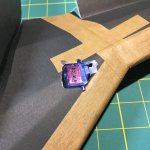 #52
Brilliant. Is there a link for plans?

#53
TheGuern said:
Brilliant. Is there a link for plans?
Click to expand...
Had to take a break from this project... Weather and other priorities got in the way.
I should be getting back to it soon.
Once it flies... I can release the plans.

#54
Great Job so Far @GMalatrasi
I'll have to build one

#55
FoamyDM said:
Great Job so Far @GMalatrasi
I'll have to build one
Click to expand...
Foamy, is there anything you wouldn't build?!?!
Jk I'd love to see someone else build my design.
J

#58
GMalatrasi said:
Foamy, is there anything you wouldn't build?!?!
Jk I'd love to see someone else build my design.
Click to expand...
There are a few things... (my living rm says otherwise) but not this beautiful plane/build.

#59
FoamyDM said:
There are a few things... (my living rm says otherwise) but not this beautiful plane/build.

to that end... Plans?
Click to expand...
Hahaha... Ok
Like I mentioned earlier, no plans until it flies. (Unless you want to beta-test it as is... We could discuss that privately)
J