#1
There are a lot of firsts going on here. My first post on the FT forums about my first successful day flying my first R/C plane, the FT Spitfire. I say first 'successful' flight because today was the day I flew without breaking anything. The first two attempts had some interesting results. Inexperience, poor conditions and weak points in the original design all contributed to the previous crashes. I learned a lot in the process and I'm flying like a pro (sort of).

I was fretting over how to paint it and even watched the video on airbrushing with stencils. I ended up doing a full coat of satin oil-based Minwax prior to building the kit for the sake of waterproofing and strength. Then I just decided to use what I had available - some old Liquitex BASIC Acrylic paints and brushes. I mixed my own colors using black, white and the primary colors red, yellow and blue. Acrylic darkens noticeably when dry so I painted a test swatch and adjusted my colors until I was happy. Then I used a pencil to sketch out the design, including the markings right on the plane as you can see here. I couldn't ignore the exhaust. Its just a crucial detail I couldn't live without. 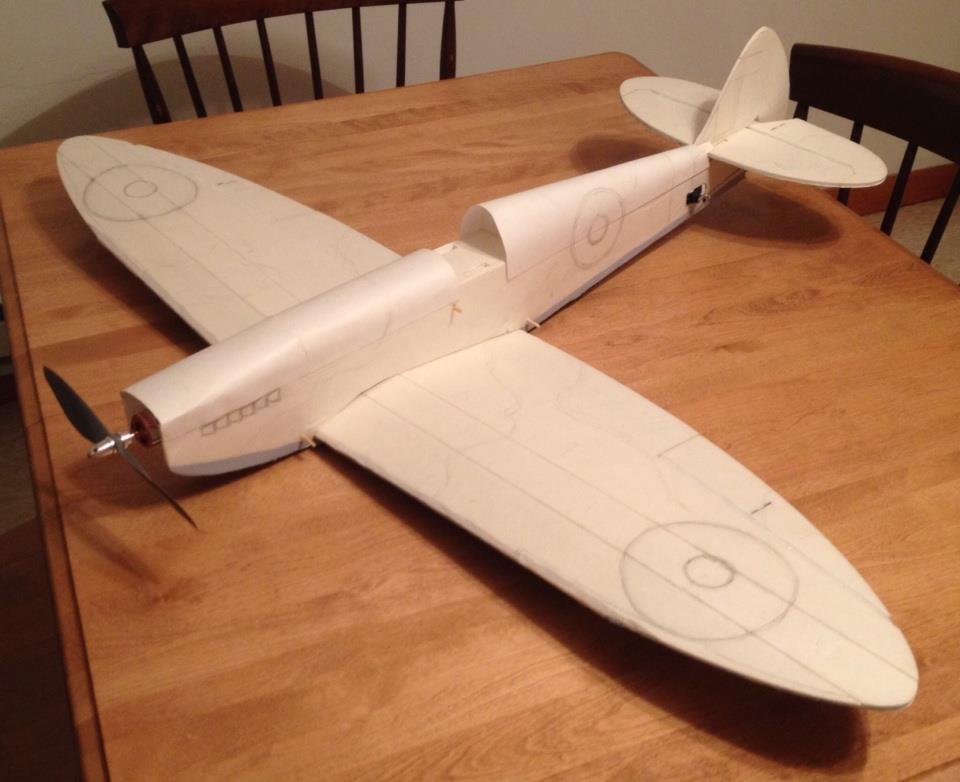 Using 3 different brush sizes and several coats I managed to get everything painted in 3 or 4 evenings. The circles were the most challenging. The exhaust was actually kind of fun to paint. I was pleasantly surprised the acrylic paint went right over the dried hot glue as well as satin Scotch tape on the turtle decks. I cut a water bottle for the canopy. Nothing fancy. I read the Wing Commanders in the Royal Air Force were allowed to use their initials for the lettering. I may add those at some point. 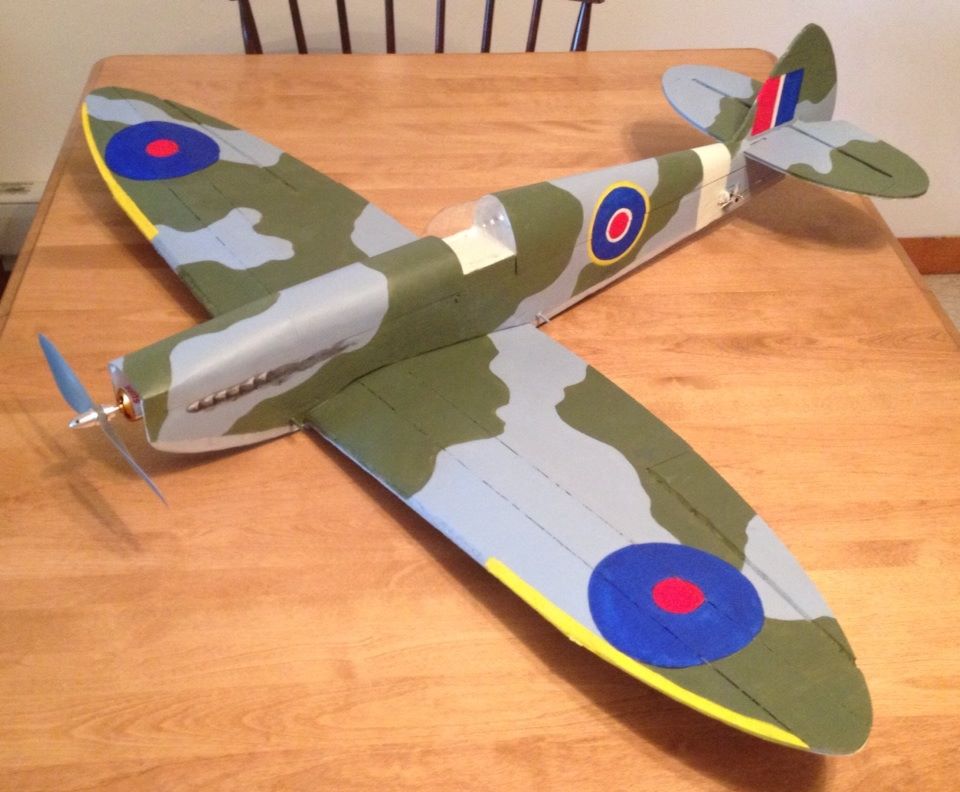 My first flight was way too windy and I made at least one bad decision (flying down wind in too small of an area) that led to a nosedive at high speeds when the controls became unresponsive. That was a hard lesson. The prop exploded and the wings came off. The front wing support blew off on impact, the skewers ripped out of the fuselage and the pod mounting skewers were hanging down. I took it home and repositioned the wing skewers higher up on the fuselage and added hot glue thinking that would make a difference. I also repaired and reinforced the pod mount with hot glue between the paper and foam as well as another layer of foamboard across the top of the fuselage just above the pod mounts.

My second flight was rough mostly because the control surfaces were so out of alignment. After a few minutes of fighting to keep the plane from climbing uncontrollably I cut the power and landed smoothly. The wing skewers had pulled most of the way out of the fuselage just from flying. I was using the elastics that came in the kit. 2 on each side of the wing but it was too much strain for the poor foam. I called it a day and went home to reinforce the skewer holes, including the one that keeps the pod from pulling out.

At this point there wasn't much fuselage left in front to put the skewers through so I traced slightly more than the missing section of fuselage onto some fresh foam. Using Ed @ Experimental Airlines' suggestion (I think it was him) I reinforced all of the holes on both sides of the foam with little squares cut from an old toysrus rewards card as you can see here in front and back of the wing.

The white foam is the replacement foam after the front wing mounts destroyed that area of the original fuselage. 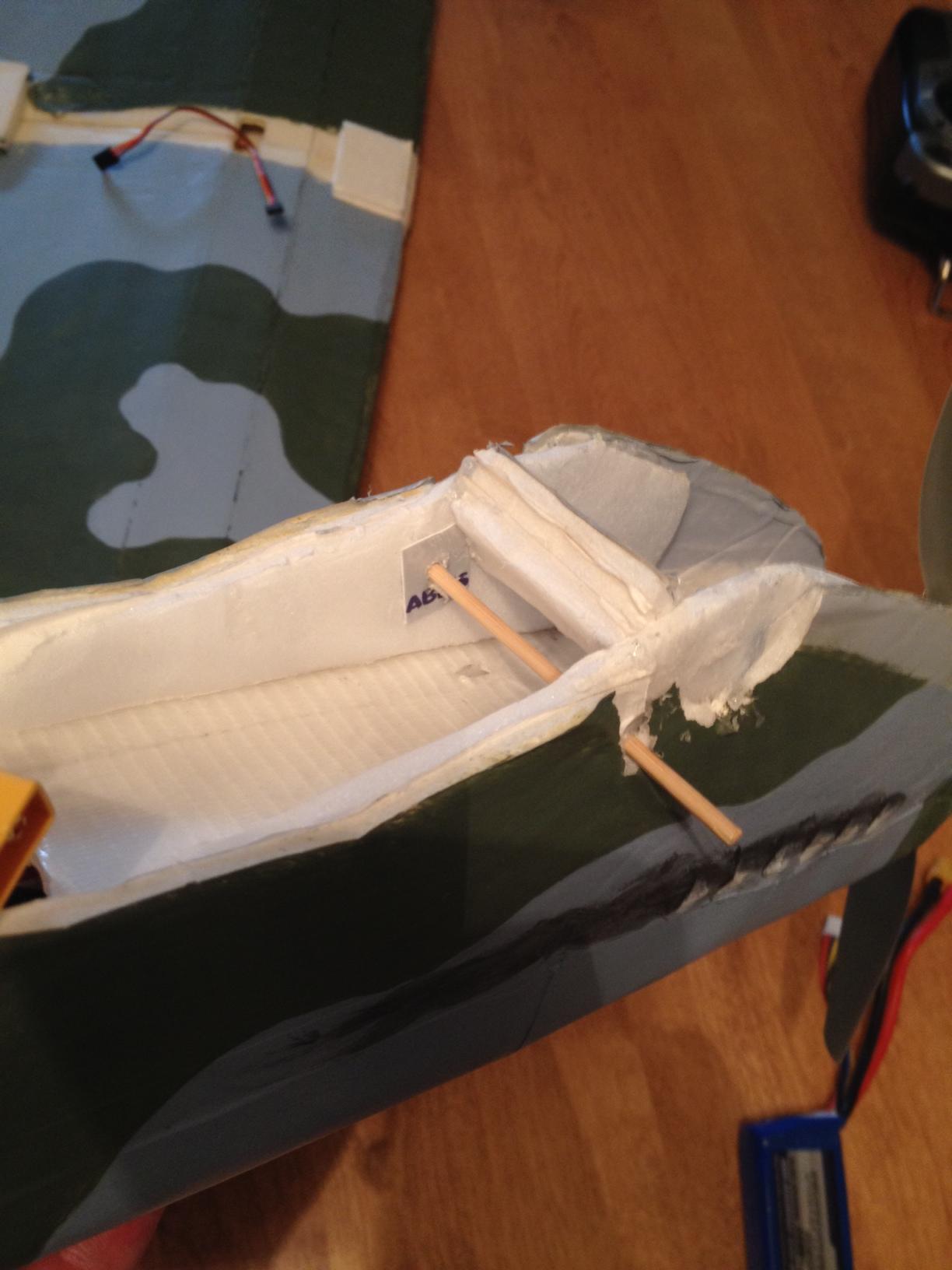 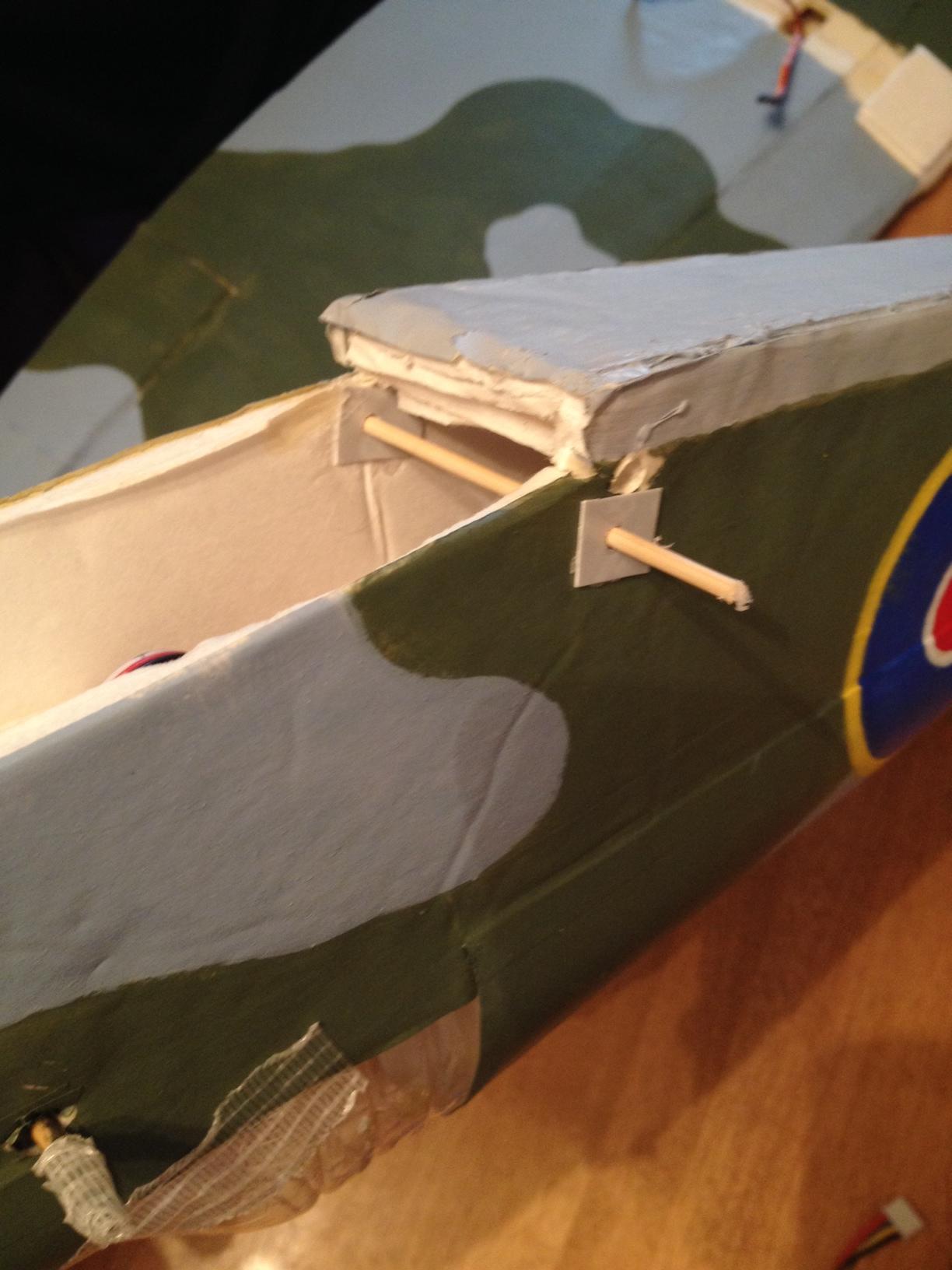 Today I tested the enhancements as well as my more precise and centered trim. The plane finally flew like a dream at high speeds, low speeds and even gliding. It tracks nicely and is easy to control. I had 4 perfect hand-launches and 4 perfect landings with not one bit of damage. I got comfortable flying high and low, did some loops, some nice, big Split-S's with varying degrees of gracefulness. And here's a pic of the Spit after its first perfect day. 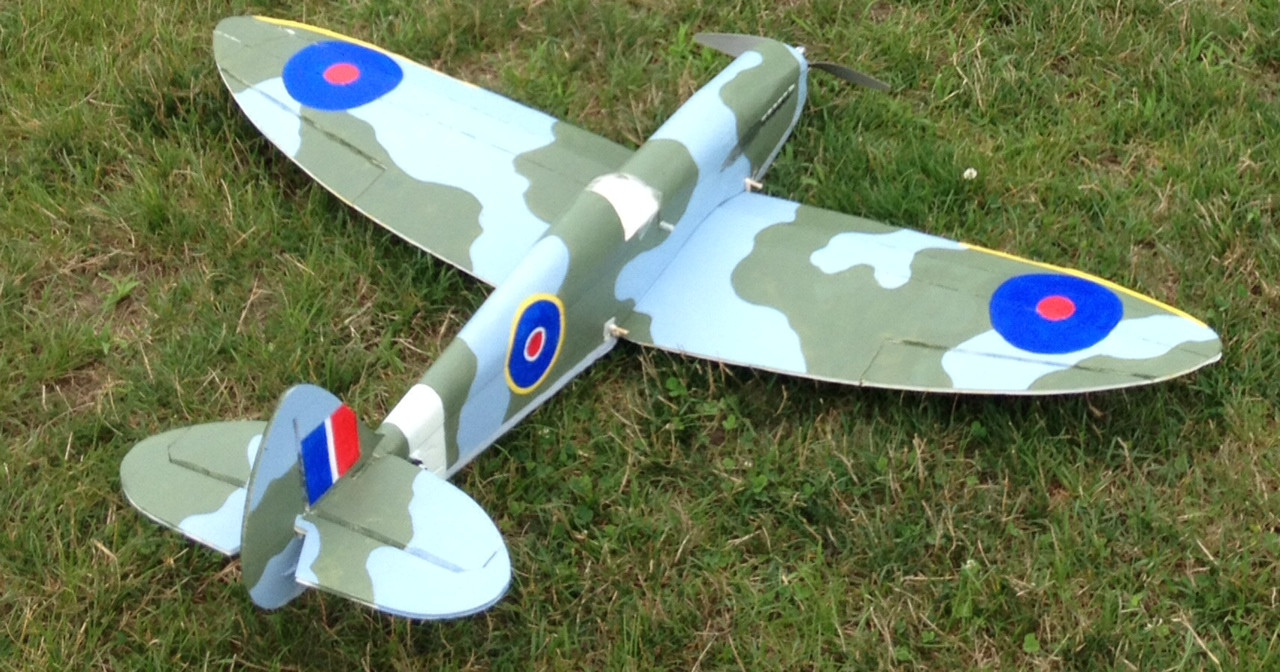 I'm using the FT Spitfire combo pack from Altitude Hobbies. When I ordered, I let them know the extensions for the rear servos weren't part of their combo pack but were needed so they threw 2 12" extensions in at no charge. I emailed them and had it in my order the next day. Be aware I just checked and I see they are still not part of the combo pack. That 9x6 prop they give you was a little scary at first, but now I love it. That Suppo motor has power to spare. It easily climbs straight up until you feel like leveling off.

Thank you to the flitetest team as well as the community for getting me excited about flying and for all the tips that made my first flying experience at almost 40 a good one. I can't wait to get back up in the air.

#2
Nice job of building and repairing way to go.
welcome to the forum
I have had great dealings with altitude hobbies

#3
Thanks Ron. I'm finding the flitetest community and affiliated companies to be a bunch of good people already!

#4
Great work! I just finished my own Spitfire, and am just crazy about it. My only previous flight experience was with my Old Fogey, so I was a bit apprehensive about taking the hot rod Spit up for the first time. And sure enough, I bounced it and broke the prop on my first launch. The only other damage was a minor crinkle on the left wingtip. Shortly after, I went flying with a friend who also has a Spitfire, and had him fly mine just to make sure it was set up right. It flew perfectly, and we were both amazed. Once he got it aloft, he handed me my radio and I flew out the battery and landed with no trouble whatsoever. I've flown it several times since, and it appears to be pretty much perfect. I love flying it!

By the way, I have yet to paint it or anything. I like to make sure I can keep a plane in the air before I go to the trouble of decorating it. ;-) That way, if I plant it I'm not out the extra work.

Your Spit is a stunner, and I may well take a similar approach to painting mine... ditto the water-bottle canopy, which is on my to-do list.

#5
Yea, I'm the friend that flew Gryf's spit. I'm having him build all my future planes. That thing was PERFECTLY trimmed and balanced. Not a single click of trim was needed to keep it flying level or keep it from banking. :applause:

#6
Gryf, it sounds like you did a great job building, balancing and trimming your spit. I'd love to see a photo of yours once you get it painted (or even before). It took me three flights (and three props) to get mine trimmed up properly. Now it flies like a dream and looks so good in the sky. Hopefully I can talk someone into taking some video soon.

The video with J. Scott taking it out for the first time shows him needing some rudder when banking. I don't find that to be necessary at all. Even when its completely on its side, I don't lose any altitude if I just give it a little elevator to hold the turn. Maybe he was just going slow. I have a 9x6 prop on it and it doesn't know how to go slow.