I wanted to share my FT Goblin project. i was recently inspired by Ran D. St. Claire's Explorer VTOL and set out to build one based on a tricopter design with articulating front rotors. My first attempt was of my own design, with a tub fuse, boom tail, and KFM4 airfoil wing. However my design was not properly thought out and had weaknesses that didnt survive hover testing:

My second attempt was based on the FT explorer, but retained a modified version of the KFM4 wing. This went better, survived hover testing, but the wing modifications didnt hold up and it folded on my second hand thrown maiden. The airframe was totaled (though it did fly ok from what I could tell, not much flight time to evaluate.) This version weighed in at 1kg:

The Goblin is attempt #3. I feel that my motor/prop/esc choice was a little small for the FT Explorer, and I wanted something more compact for transport, as well as lighter. My goal was a 25% weight reduction, which it looks like I will make. My only concern is how the goblin will fare at 700g AUW. It is higher than the listed flying weight in the build spec, but I assume that left some headroom for the FPV option. Here is how she sits now:

Ive got some videos of the first maidens and hover tests, as well as details of the motor tilting mechanism if anyone is interested. Thanks for looking!

Mentor
#2
I suspect quite a few people will be interested in your maiden and test videos.

#3
I am about to build a goblin but I will wait to see what your video show. Looks pretty cool!

#4
As hey say, great minds work alike. I was already thinking of the goblin as a VTOL! Please post everything!
Only thing I see different from what was in my head so far was I was planning nacelles coming off the wings, your Way, May will be better.
This may well deserve full article on the site.
N

#5
Ive just realized that I dont have the videos on youtube yet.....so I cant post them until tonight.

I think nacelle mounting on the goblin is a good idea. The best part is the opportunity to stash the two forward escs in the wings. Maybe then I could have fit the FC in the rear of the nose section. I went with the forward booms on the explorer because of the removable wing. I didnt want to deal with extending motor wires, then unplugging 2 motors and 4 servos every time I set up.

Once I moved on to the Goblin, I didnt bother to re-engineer the motor tilts. I would give it consideration if there is ever a version 2 for me. Another benefit would be keeping the weight of the motors closer to CG.

One of the big unknowns for me still in this build is balance. I dont have alot of liberty to move the battery around in this build, and I would hate to add dead weight. We'll see. Still to be done is a motor mount for the rear rotor, and a solid mount for the FC.
N

#6
Here is a video of the rotor tilting mechanism (they are only going different directions because I was using a basic servo tester):


Here is my early hover tests while tuning the FC on version 1 (I dialed it in better than this in v2):


Here was the end of v2. I was hand tossing it to make sure it was a viable airplane before attempting a hover to flight transition....clearly I never got that far:

#7
I got the FC hard mounted tonight. All I need to do is figure out the rear motor mount then install the elevon servos.

I am hoping for the sake of weight and simplicity that one of the becs can handle all 4 servos. The FC and rx is fed from a dedicated bec, but the FC only has the ability to service 2 becs. I could use the 3rd for the elevons but it would be a custom wiring job done with cables not through the pin headers. It's messy and space is limited.

#8
If /when you get this going I'd be interested in what fc you used and how it is programed to fly in both modes and transition.
N

#9
I'm using a kk2.1 hc with a custom firmware. It's called openaero vtol. There is a big thread on rcgroups where you can download everything. I'm basically standing of the shoulders of genius here, haha.

If you find the flitetest article and video with Ran D. St. Claire's ft explorer vtol, it's the same FC he used (I'm pretty sure he was the primary developer, or one of them.). Really extraordinary group of people who made all that happen.

#10
nstiesi said:
I'm basically standing of the shoulders of genius here,
Click to expand...
Ha! That is exactly what I was looking to do. I'll check out the thread over at rc group,, thanks
N

#11
Also, if you want to use the kk board find one now and jump on it. Maybe buy a few if you can. It appears to be going obsolete. I only bought one but if this plane works I may go grab some backups while I can.
N

#12
More progress: Printed and installed the rear rotor mount. I made it so I can remove it and mount a traditional motor If I want to revert (although I glued in the front booms so I'm not sure it matters.). I did have to cut a small access hatch in the rear of the bottom panel so I can access the rear esc and motor mount hardware. Installedhe motors and wired them, but didn't power up to check rotation. Also installed straps for the battery.

I'm very pleased that it balances per plan, albeit with the battery nearly all the way forward. I was worried it wouldn't. Weight so far is 720ish grams, with just a little more needed for the linkages. I will stay under my goal of 750, which is a 25% weight reduction from the version 2 based on the explorer. That is great news for my power train, but with the smaller wing I worry about wing loading and stall speed. 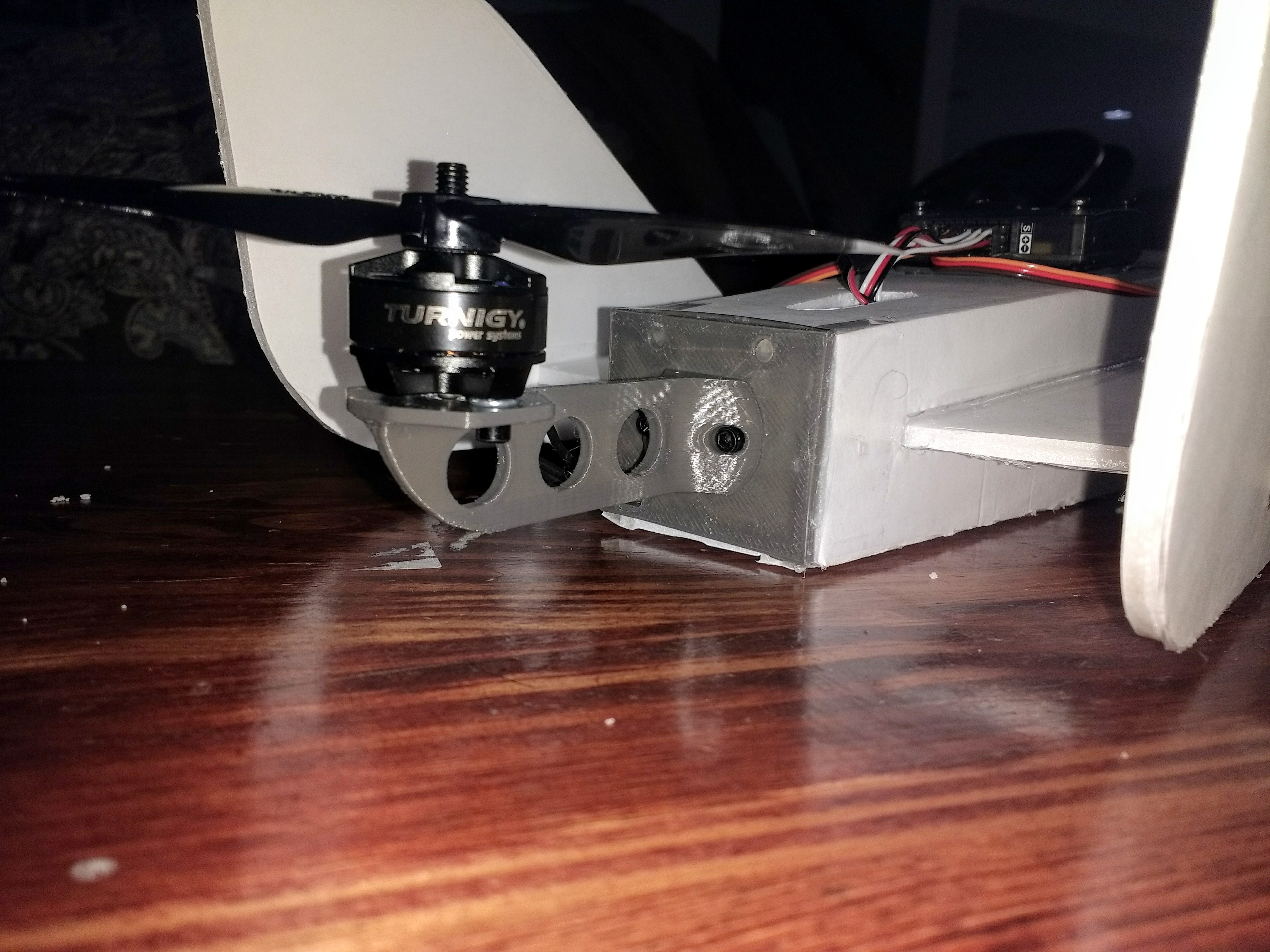 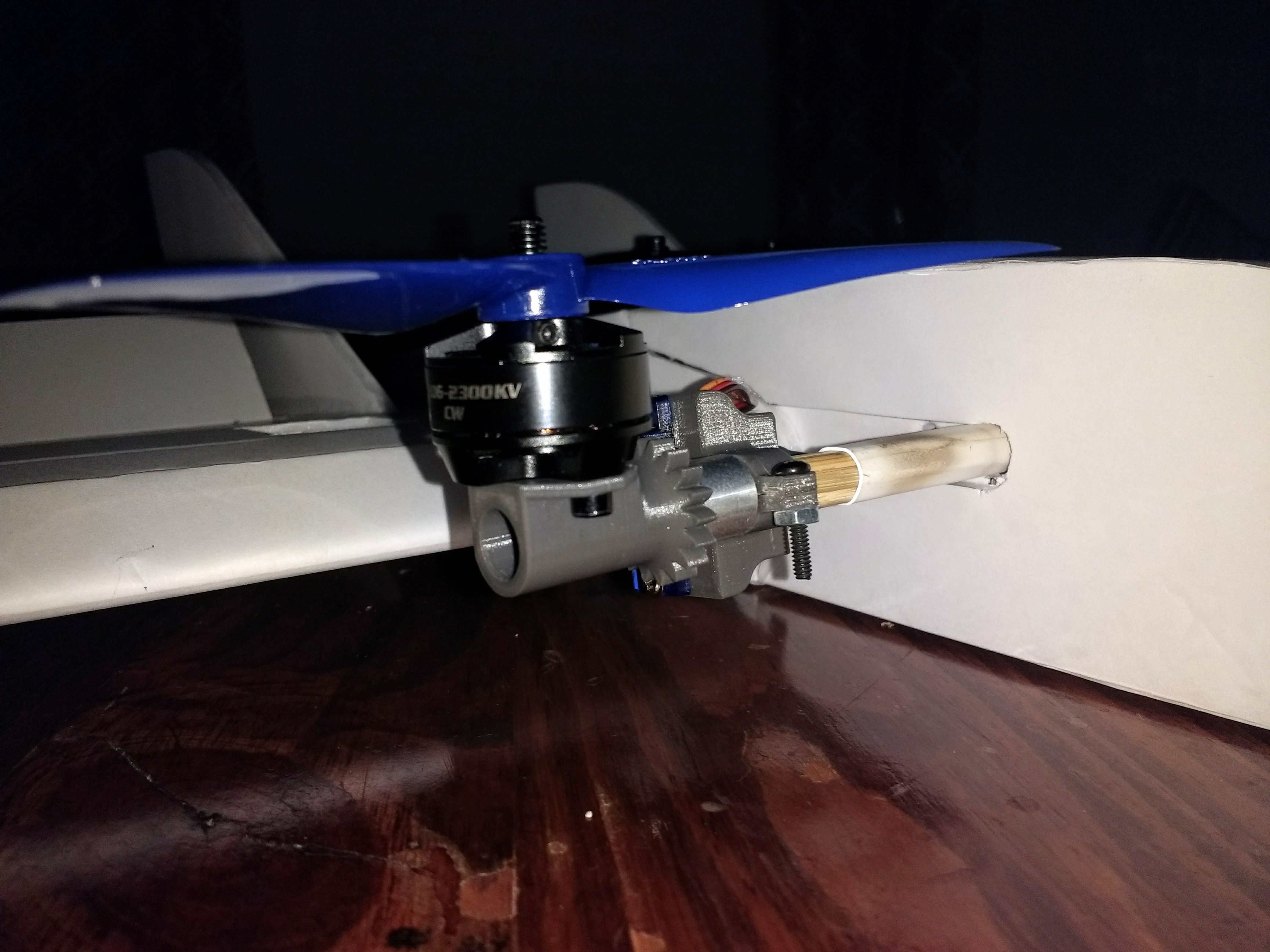 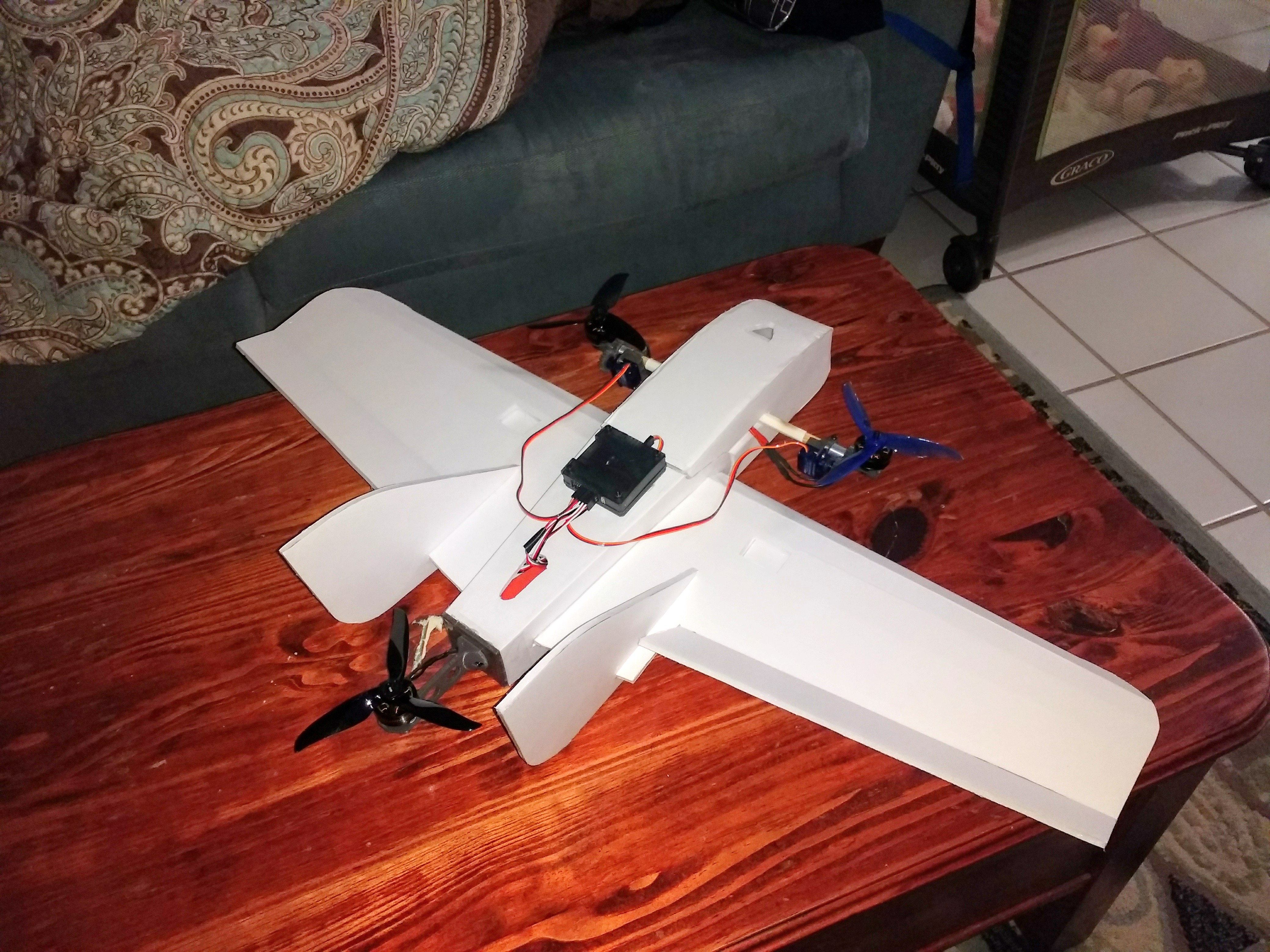 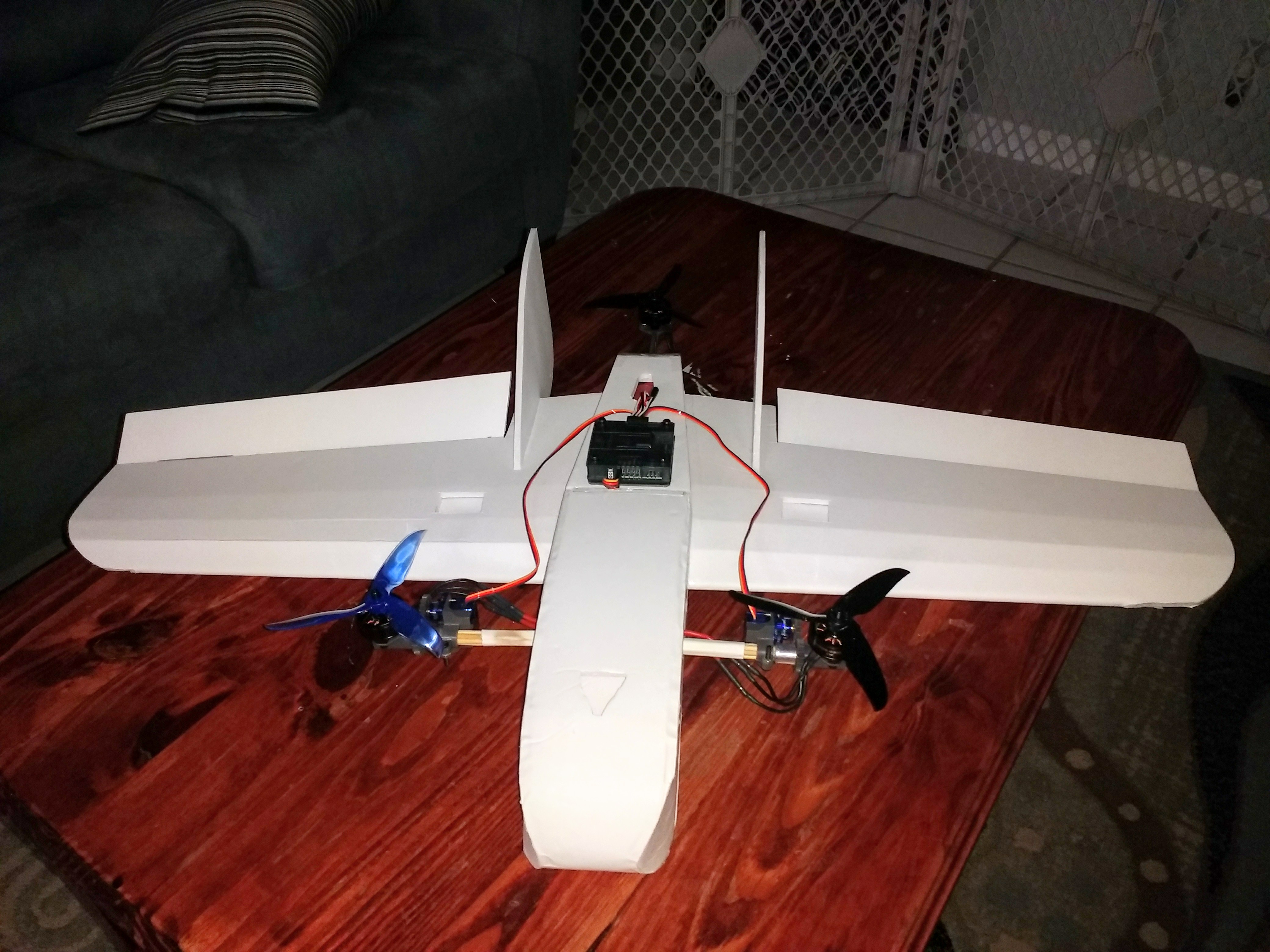 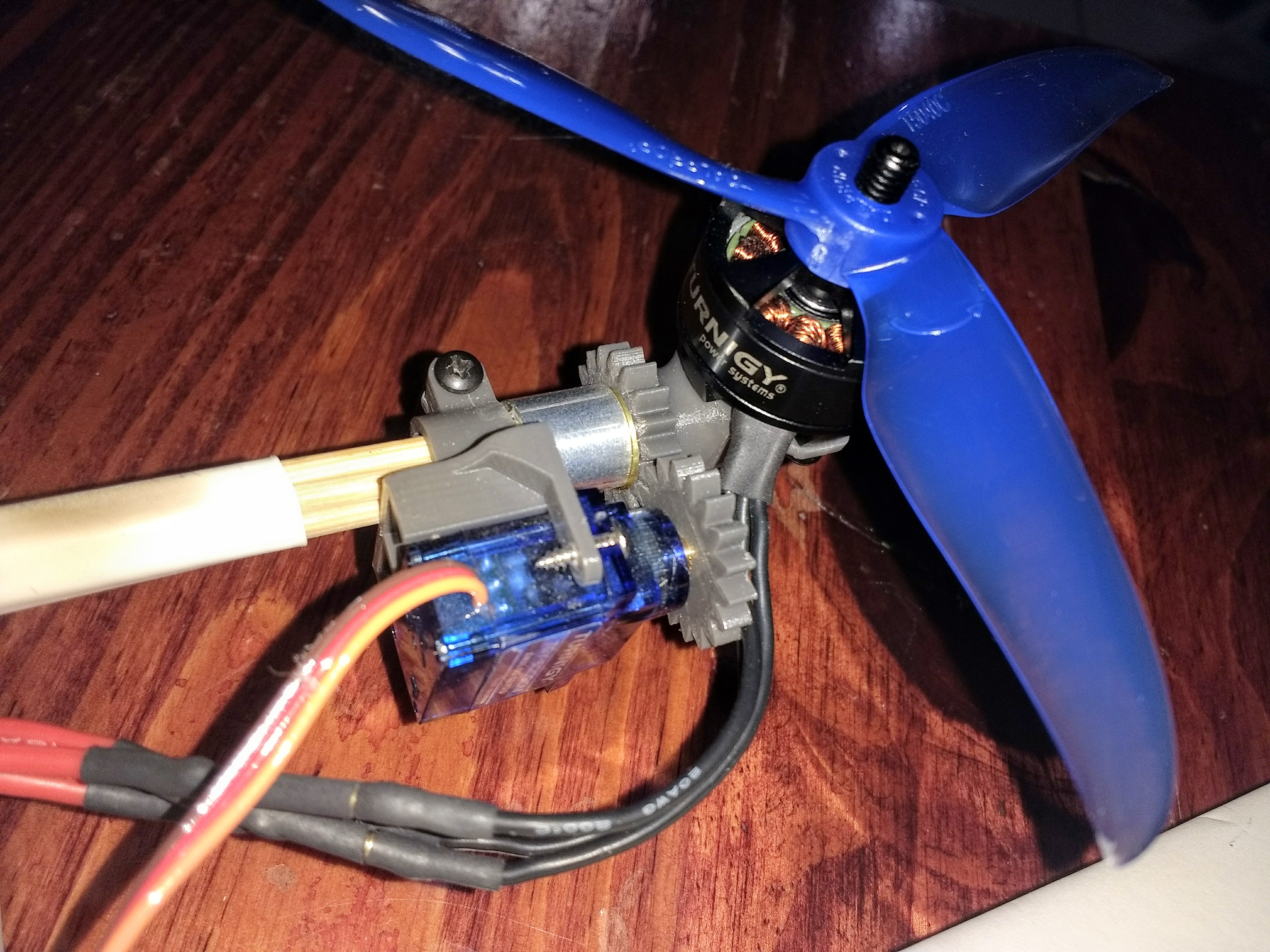 #13
Haven't done alot in a few days. Once I started wiring I quickly realized that I didn't know an adapter cable was needed for the x8r to talk to the kk2 via sbus. The square wave signal is inverted. I spent a few days making an adapter cable and just finished tonight. Will finish wiring and programming hopefully this week. 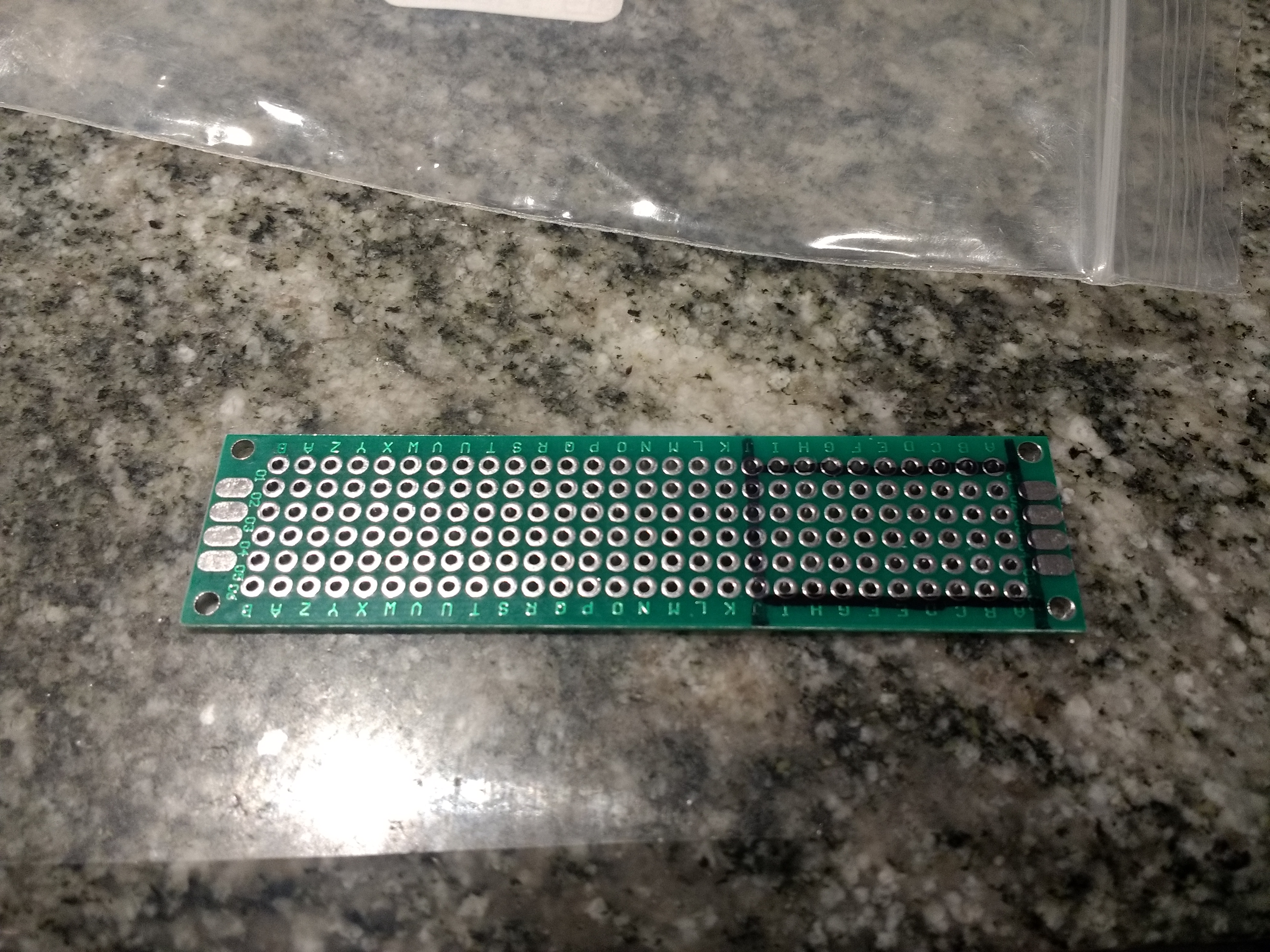 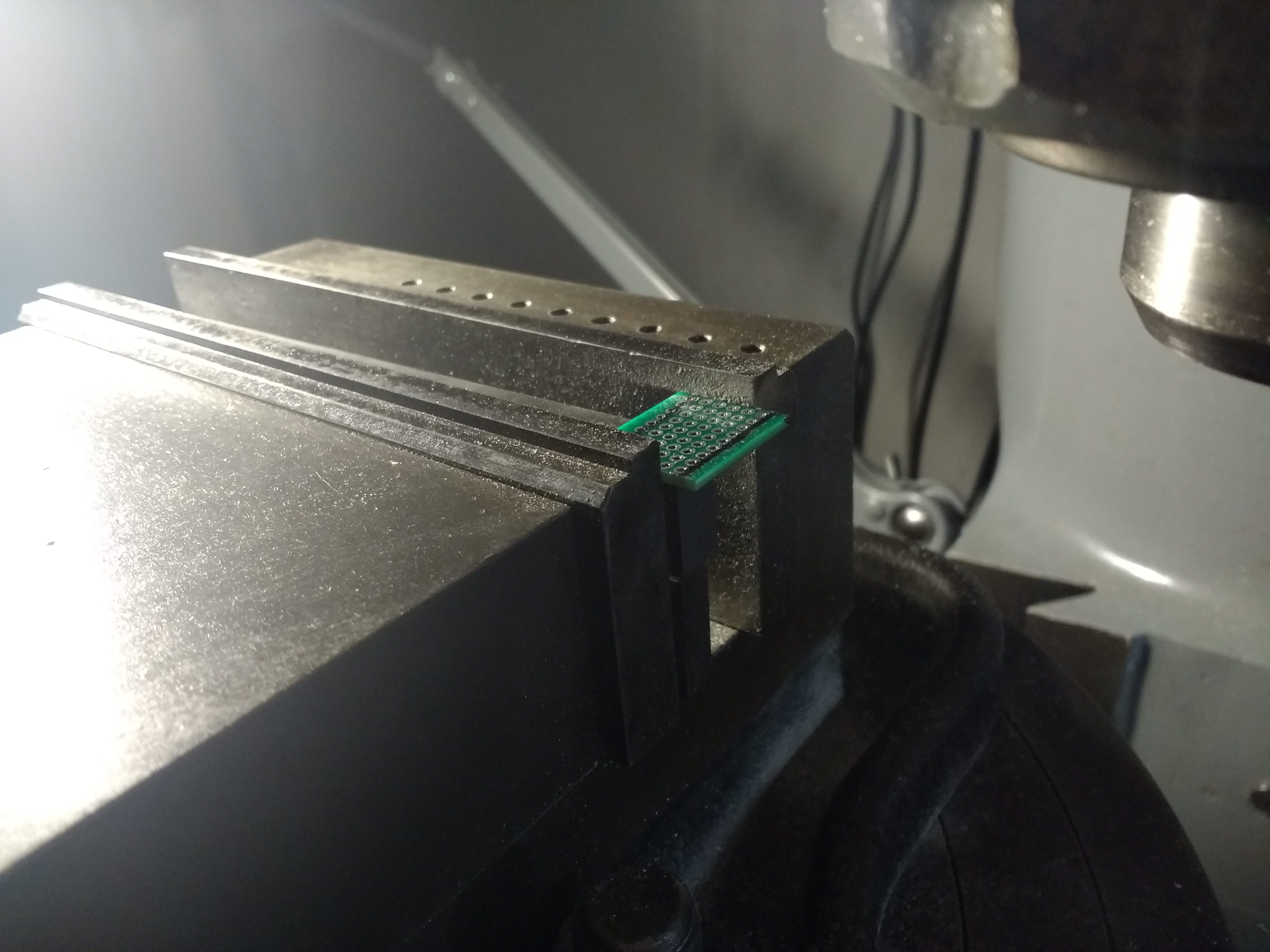 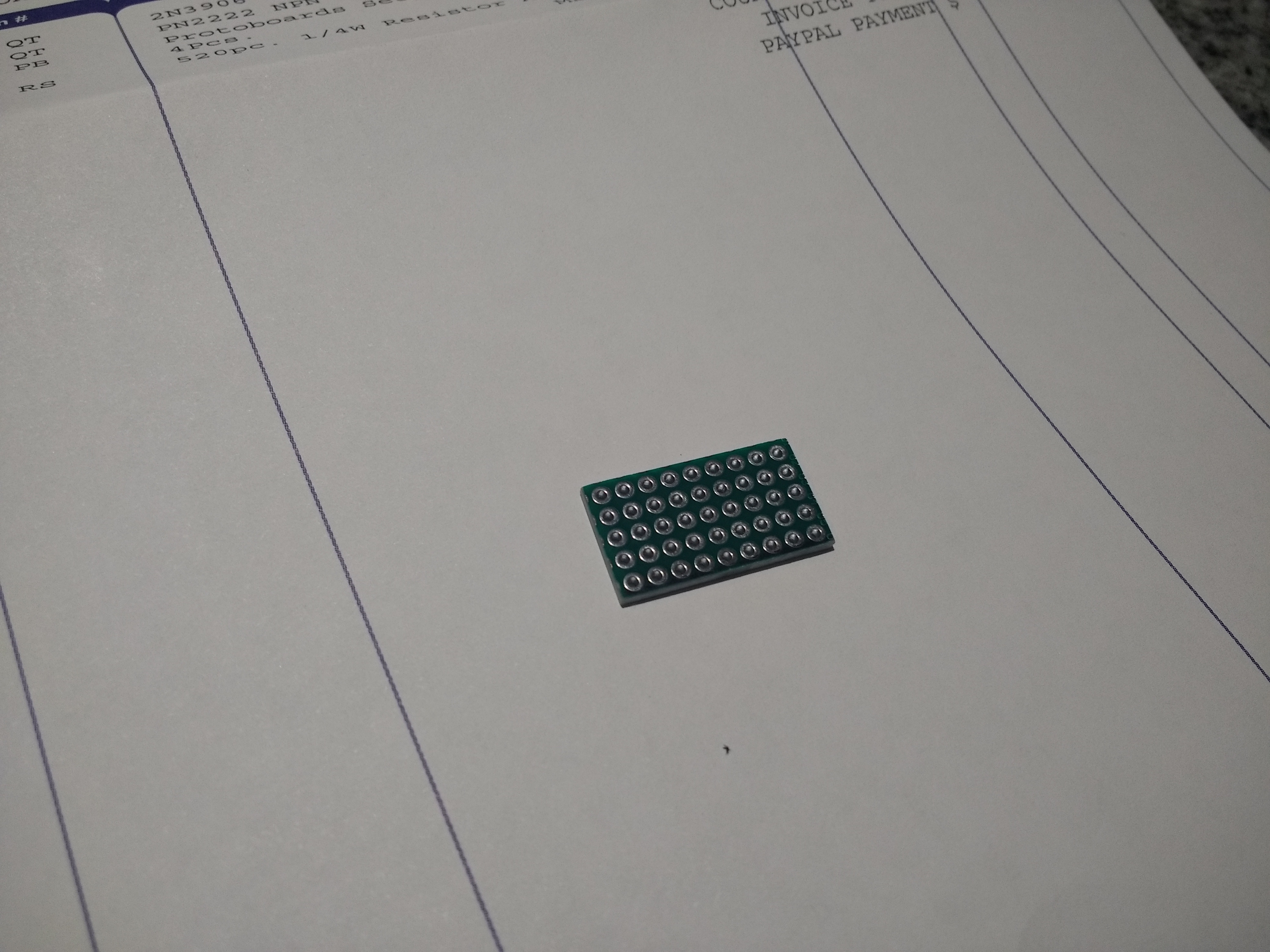 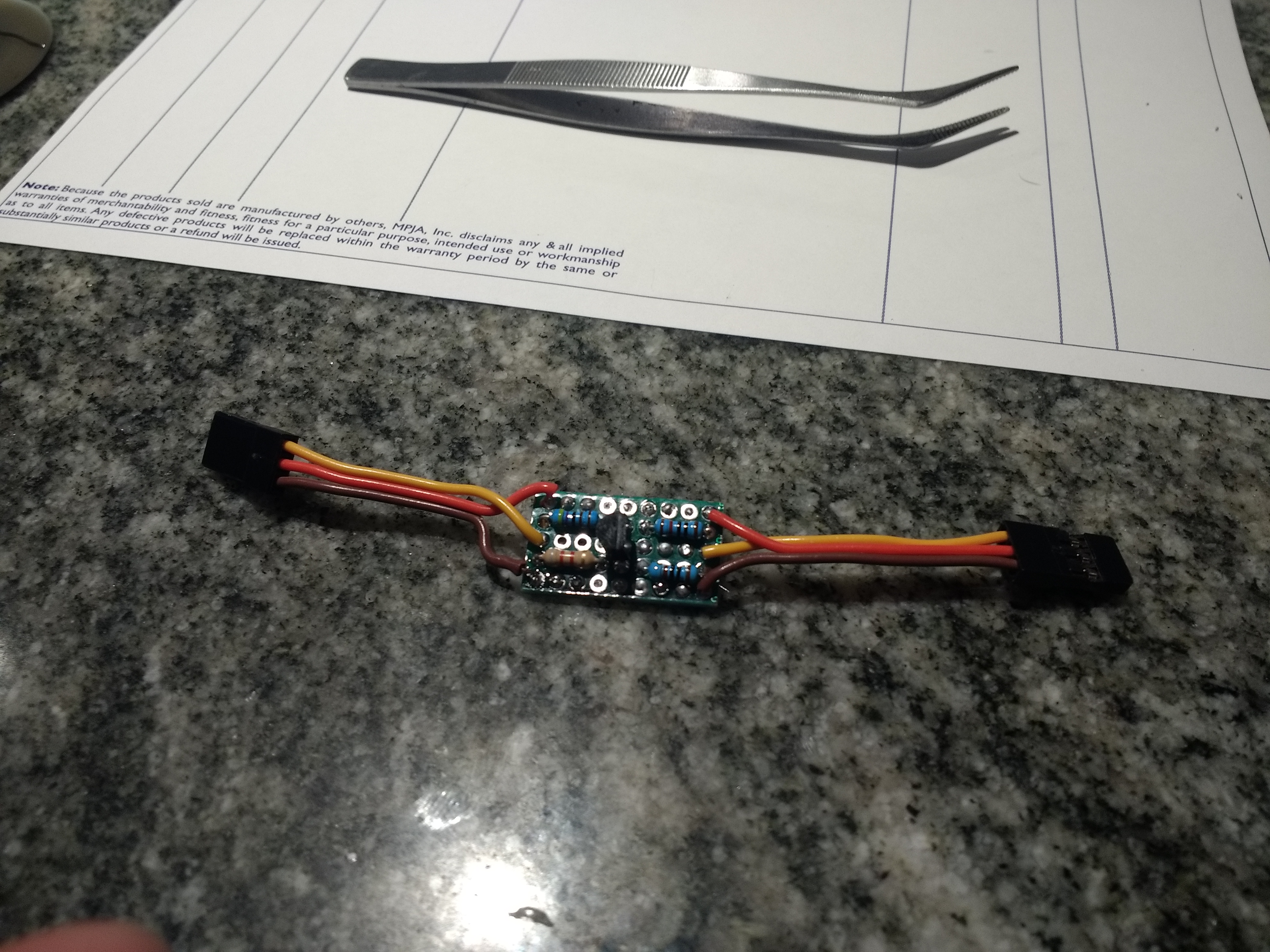 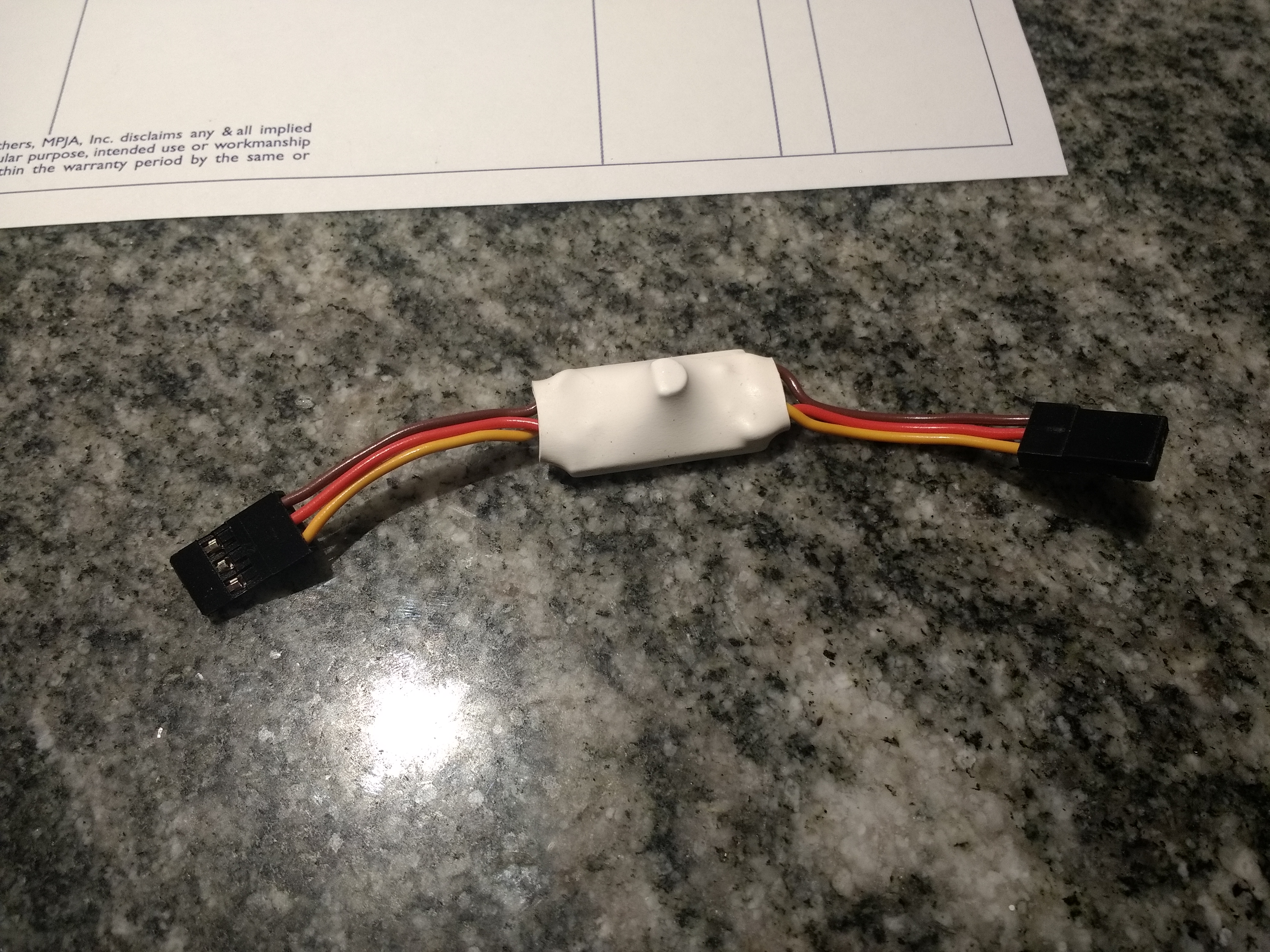 Mentor
#14
4 resistors and a transistor?

#15
ElectriSean said:
4 resistors and a transistor?

#16
She's done! I stripped her down and gave it a coat of minwax for dew proofing and a little color graphic. I rushed it and did a bad masking job so she's not a beauty queen with some overspray, but it was made to be flown so looks aren't all that. Final weight, about 742g.

I did completed some hover testing and tuning today. I didn't video it, but it wasn't all that exciting.

All I need is a low wind day to maiden then try transitioning from hover to forward flight.

Seeing as how it's taken 3 airframes to get to this point, I sure hope the rest goes smoothly! 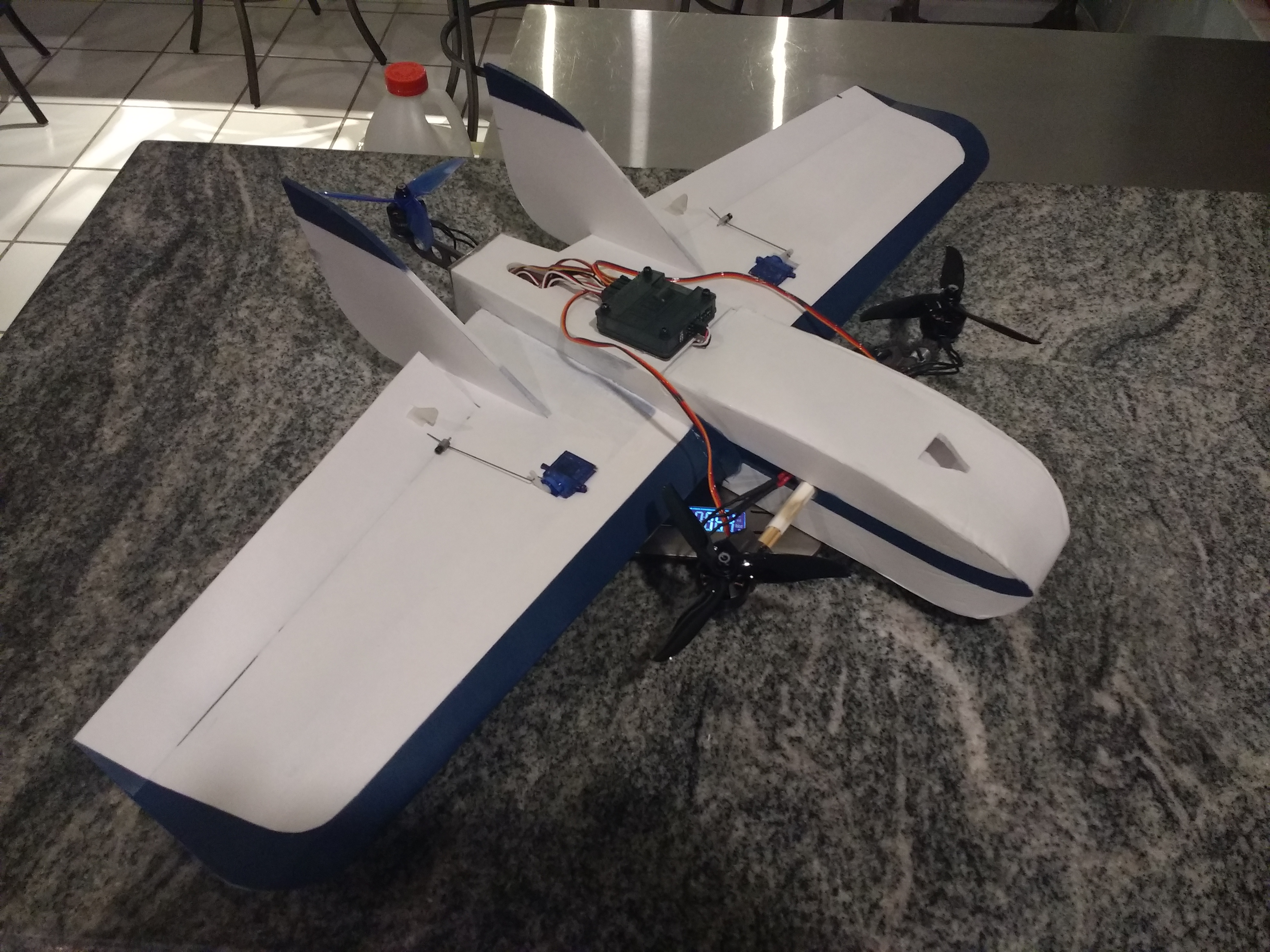 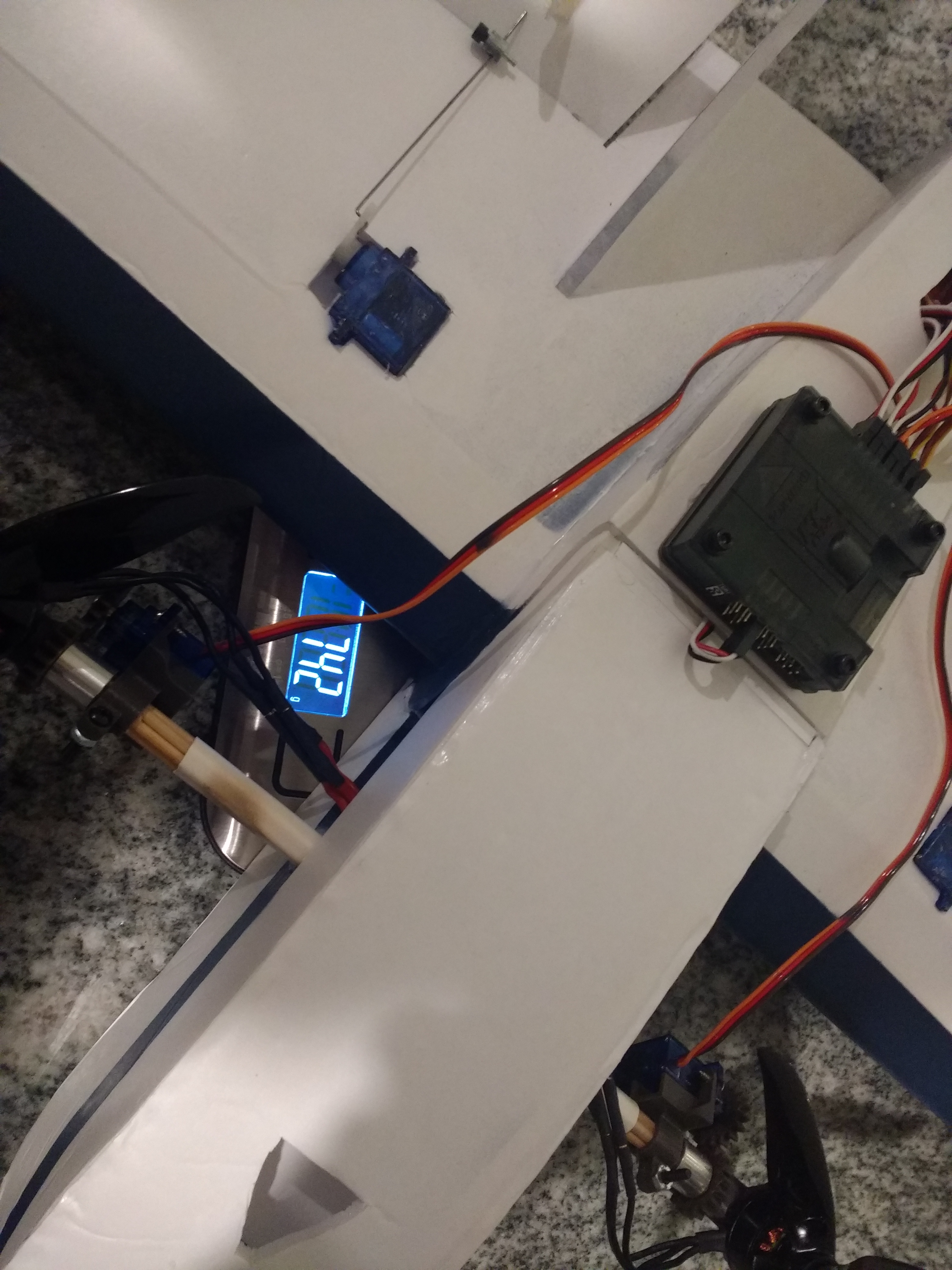 
I honestly have no idea. It yawed to the left badly, then nosed down. This happened twice. The first time I thought that the left motor mount spun on the boom and pointed down causing the bad yaw. I glued the mount back to neutral and tried again with the above result.

The video doesnt show much (taken by a 5 year old), but she was all wrong from the get go. I DID have a little bit of down thrust in it, as I do all of my planes, but I just didnt think it would do THAT (and honestly I dont know).

My only other idea is that my thrust angles were just off....maybe one or both motors were pointed slightly left? Maybe the booms flexed under power leading to the poor thrust angles? Is 750g simply too heavy for the Goblin? Is there something aerodynamically wrong with my build to begin with? This configuration DID fly in the FT Explorer. If I had just built the @!*% Explorer wing to begin with maybe I wouldnt be here right now.

I honestly dont know where to go from here. I have been working on this on and off since november and now have nothing but 3 broken planes to show. It is really taking a toll on my motivation.

I am considering making a new nose, pulling out the booms, and setting this thing up as a regular pusher to see if it flies. If it doesnt, I quit.

Sorry, just needed to vent! I am as depressed as I can be about something that really doesnt matter in the grand scheme of life, lol.

#18
I'm jumping in really late. It sounds like you could hover successfully, but things went bad during the transition to forward flight? If that was the case, could you put it in forward flight mode before launch, check all the control surfaces/motor tilt/rpm works as expected (carefully, because it's super easy to invert your brain with some of these complex effects.) Then would it make sense to hand launch and fly in forward flight mode only? If the setup is plausible and the controls are in the right direction (and things like CG are correct), that should work and you should be able to fly like an airplane successfully. Then if you want to test a transition, do it way high so you have time to flip back to hover if the forward flight still isn't going well.
From your posts, it looks like you are proceeding systematically and carefully, but these are complex systems (and the flight controller is a bit of a black box), so the more you can do to isolate the different pieces and build up confidence in them, the better things will go when you move on to the trickier bits. You mentioned standing on the shoulders of giants, but you also have to do the same process with your own work ... build up confidence in the building blocks and add new unknown variables one at a time.
Super cool project! Don't worry about letting it sit for a few days, but then I hope some good ideas come to you (like an itch) and eventually you get to the point where you have to scratch the itch and try again.
N

#19
Actually, this was a hand launch.....just forward flight. I STILL haven't attempted a transition because I keep stumbling at the hand maiden. The above appears not to be a VTOL problem, its an overweight twin engine tractor prop FT Goblin problem.
N

#20
So, due to the damage to the tilt mechanism I decided to build her up as a regular goblin.

I took her to the field and.....into the ground again. However, the dive was gentler. After 2 tries I decided that maybe it was nose heavy. Success! Burned a whole battery and she flew nice.

So, MY goblin likes the cg about 1-1.5 inches past LE.... about double what the plans call for. I have no explanation, but at least it is sorted.

I felt the vtol config still had a yaw issue that didn't present in the standard config, but with the CG sorted, I could fix that with thrust angles and differential thrust in programming.