GoPro too much for my tricopter?

I am pretty new to multirotor. I built up a tricopter based on batbones frame with the following


I have probably 20 flights on the tricopter without gopro and FPV, and I am happy with how it flies. When I put on the gopro and transmitter (immersion RC) it is almost unfliable. Tail will sag, barely hovers at 3/4 plus throttle.

I have messed with the PI settings and I have moved the weight around but I think it is just too heavy with the gopro. Even without the gopro case it is about 120 extra grams with the camera and TX.

My questions:
Does this seem right? Is it just too heavy for the motors / prop / battery?
Has anyone used the park300 1080kv with a 10 inch prop on 3 cells?
Any other suggestions on what might be wrong?

That was with a full FPV setup including GoPro (uncased, but with lens protector).

#3
I have loaded my tri down to the max before. Yes, it's gets a little sluggish and unweildy and I have to be careful how fast I approach the ground, but these things will handle more than you suspect. As invid said, how much does it weigh?

There's two rules of thumb I go by. First, how much throttle does it take to hover well above the ground effect distance, above say. . . 6 feet? Second, how how are the motors and ESCs getting for a nice leisurely 5 minute flight? If you're flying when it's around 75F and they are warm, you're ok. If they are toasty to hot, you're probably pushing it.

This setup with a Gopro and case, light, cardcam and video Tx weighs somewhere around 1500g and flies at around 60% throttle. The motors get a touch warm, but not bad. 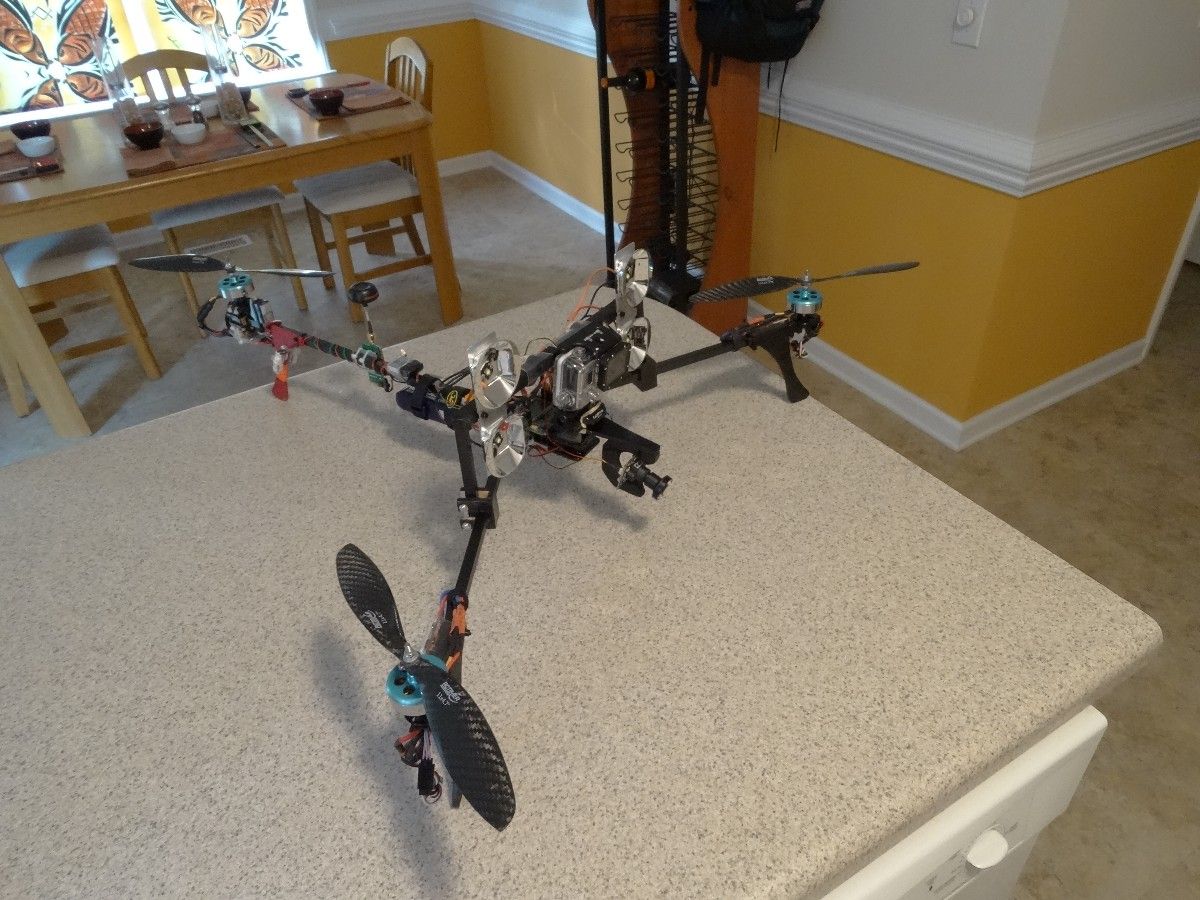 Staff member
Moderator
Mentor
#4
Yeah, the Turnigy Park 300 motor is a bit light for a batbone tricopter to carry the payload of FPV gear + gopro, and your hover throttle is telling you that clearly.

That class of motor is just about topped out with a gopro on a light quad, subtract one motor and add some more frame weight, and it's simply not going to be happy.

Not exactly sure which SunnySky Invid is flying, but the most likely candidate (x2212-13) will draw about twice the power as the Park 300 . . . and should be more than enough to sling a gopro around the sky.

I'd also say the 9x4.7 is probably on the high side for that motor . . . possibly even beyond the bend in the curve -- as you put too big of a prop on the motor, the motor bogs down and your thrust actually drops . . . but your current still goes up. where does that extra power go to if it's not going into the air? Heat. I wouldn't put a 10" prop on that motor.
I

#5
Craftydan said:
Not exactly sure which SunnySky Invid is flying, but the most likely candidate (x2212-13) will draw about twice the power as the Park 300 . . . and should be more than enough to sling a gopro around the sky.
Click to expand...
My bad...it was indeed the x2212-13 980 kv motors I was using and I found them to be adequate, but not inspiring in that application. Tricopters need powerful motors since there are only 3. The SunnySkys were what I understand to be 400 class motors, so if the OP is using 300 class motors he's going to need to scale his AUW down accordingly.

However, if the frame will accommodate 22mm motors, the SS motors I used should perform decently. Depending on the AUW he may even be able to stay with the 9" props which is preferable for the sake of responsiveness with these motors.
M

#6
I really appreciate the help.

The tricopter weighs 840 grams without the FPV gear and gopro. GoPro and FPV add another 200 g for a total of 1040. Hobby King lists 360 grams of static thrust for this motor with an 8x4.3 prop at 11 volts. I am sure I am getting more than this out of the 9inch prop but you may be right that I might be on the wrong side of the efficiency curve.

On a 75 deg day after 5 min of flying the motors get hot, not too hot to touch but too hot to comfortably hold your fingers on for more than a 3 or 4 seconds.

I will measure the current draw and static thrust of each motor over the weekend and post back here. I am going to look into ordering another set of motors to give me a bit more power.

#7
i can see why you are hovering at 3/4 throttle because hobby-king says that you will only get about 300 grams of thrust with the motors, that is a total of 900 grams of thrust. you really need a 2:1 ratio of thrust to weight of tri. so the AUW of your tri should be under 450 grams. now on my electrohub quad i have about a 4:1 ratio of thrust to weight.
you should get some more powerful motors.

hope you get your tri going great

#8
I measured 375 - 400 grams of static thrust with the park 300 1080 KV an 9x4.7 props. My amp meter has too much internal resistance so I was unable to measure the current at this output. With the meter in line it topped out at 4.1 amps an about 275 grams of thrust, I dont know what the voltage drop was becuase I only have one meter

I ordered a set of NTM 28-26 1100 kv motors hopefully these give me a bit more power. I'll post an update when I get them installed.

This would say the NTM would give me basically 50 % more thrust with essentially the same prop an KV rating. I was assuming the KV rating would hold until you start to approach the max current rating of the motor.

hope you get your tri going great

matt
Click to expand...
You really need a 3:1 ratio at the minimum, to fight any winds that might come along. My quad originally had 2:1 ratio, and it was really hard to fly. With 3:1 it comes alive.
I

#10
x0054 said:
You really need a 3:1 ratio at the minimum, to fight any winds that might come along. My quad originally had 2:1 ratio, and it was really hard to fly. With 3:1 it comes alive.
Click to expand...
2:1 isn't bad, you just can't brute force your way out of poor decisions. I had a lot of fun running a Flip FPV with a 2:1 power to weight ratio on 3S. Good power level for beginners, especially if you tend to overcontrol.

3:1 or 4:1 is amazing though - that's when you can watch the ground recede like you're in a rocket.
M

I will experiment with different props after I get an appropriate set up to measure current draw.

Side note on the motors. I ordered 4 of the NTM 28-26 so I would have a spare. One of them seems really loose you can push the outer housing up and down on the shafte almost 1 mm.