#21
Beautiful. A very high likelihood I'll be making this plane as a foamy!

#22
SquirrelTail said:
You are the world's fastest builder!! Dang I feel slow
Click to expand...
It is a beginner Guillow's kit so it builds fast. They don't want your first builds to take so long so you get discouraged. I enjoyed the simplicity. It lets you focus on how best to do the RC conversion.
On second thought, it did take longer to build than it took the electronics to arrive on the slow boat from China.

Vimana89 said:
Beautiful. A very high likelihood I'll be making this plane as a foamy!
Click to expand...
That's a great idea. After building a couple of FT designs I immediately began converting my favorite balsa airplane designs to foam board. Usually they fly as well as the balsa originals. Some need some design tweaks.
Jon

#23
rockyboy said:
I used one of those WL Toys bricks in an indoor build too and I like how it performs - but it requires that I rebind the receiver every single time it gets plugged in. That part is a little annoying!
Click to expand...
There's another potentially disastrous "gotcha". I found out the hard way that it's very important to make sure you have the correct model memory selected in the transmitter before binding to the receiver. The F949 receiver will bind to any saved airplane in your transmitter that uses AFHDS protocol. I had the wrong airplane selected and both the rudder and elevator were reversed!

Mentor
#24
TooJung2Die said:
There's another potentially disastrous "gotcha". I found out the hard way that it's very important to make sure you have the correct model memory selected in the transmitter before binding to the receiver. The F949 receiver will bind to any saved airplane in your transmitter that uses AFHDS protocol. I had the wrong airplane selected and both the rudder and elevator were reversed!
Click to expand...
I got to the field and was frustrated one of my motor gliders wouldn't connect - so I rebound it, launched, and THEN realized the ailerons were reversed!

I was able to get it down OK and realized I bound it to the wrong model in the TX!

#25
rockyboy said:
I was able to get it down OK and realized I bound it to the wrong model in the TX!
Click to expand...
Experience is what we gain from making mistakes!

I had a brief opportunity to do some test glides and short power on flights in the backyard. Test glides indicated it was nose heavy. It would glide flat for about 20 feet then nose down into the grass. I can't believe how far back on the wing the CG has to be. I tried a few powered flights. It cruised around nice and flat. It didn't balloon upwards or porpoise as I expected. As soon as I backed off the throttle it would nose down into the ground.

I installed a Velcro strip under the wing above the receiver to mount the battery and try different positions. The next test flights will be with the battery all the way back in the cabin. I added 1/20" shim to the 1/16" shim already under the wing leading edge. The instructions emphasize the leading edge of the wing must be shimmed in order for the airplane to glide correctly. You find out how much by trial and error. 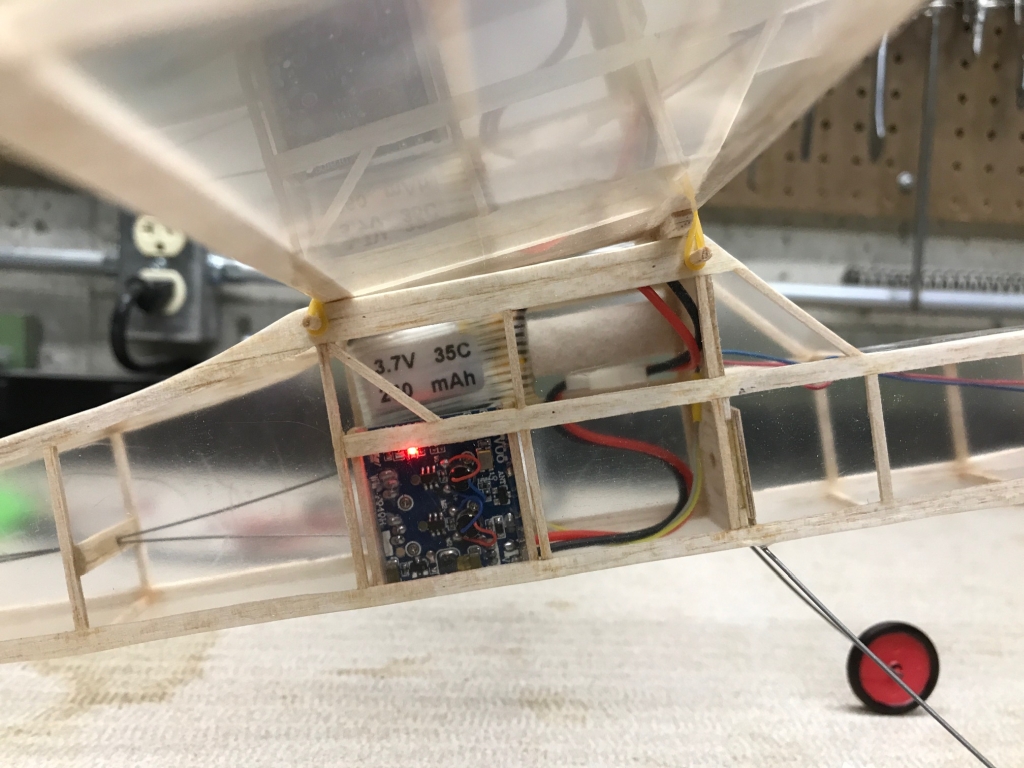 Now the CG is all the way back at the trailing edge of the wing tips per the plans. Trimming can take time but these were very encouraging first trim flights!

#26
I had 20 minutes before sundown. Much better with the battery all the way back. Even better with the battery halfway behind the wing. It's on the edge of feeling tail heavy. I thought it would glide like a sailplane but it's only so-so. It glides flat but it drops faster than I expected. I'm not complaining. I got 20 minutes of flight on a 260 mAh 1S battery. It's maneuverable enough to fly in a small indoor venue. The light and flexible landing gear work great. It's like having shock absorbers on the wheels. I did several ROG takeoffs. There's no torque roll when taking off.

This the best battery position. I still have a hard time wrapping my brain around the fact that the CG on this type of airplane is at the trailing edge of the wing. 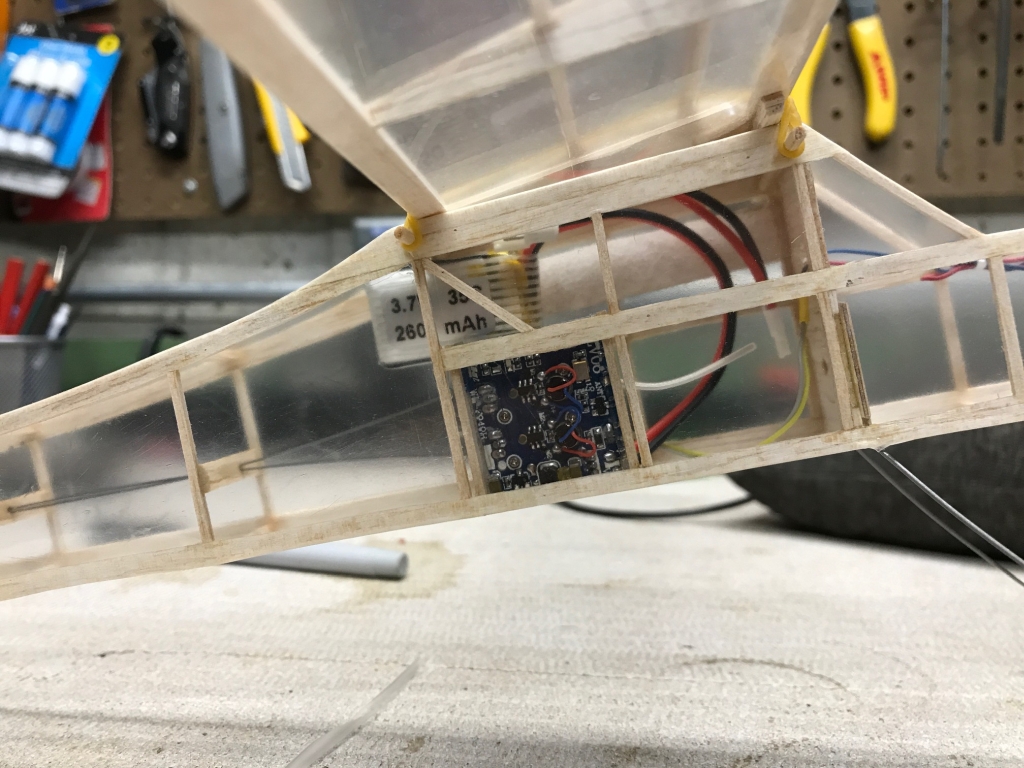 Let's see what can be done about getting some decoration on it. I think it finally deserves it. I hope the next post will be video.


Got some decoration on it. 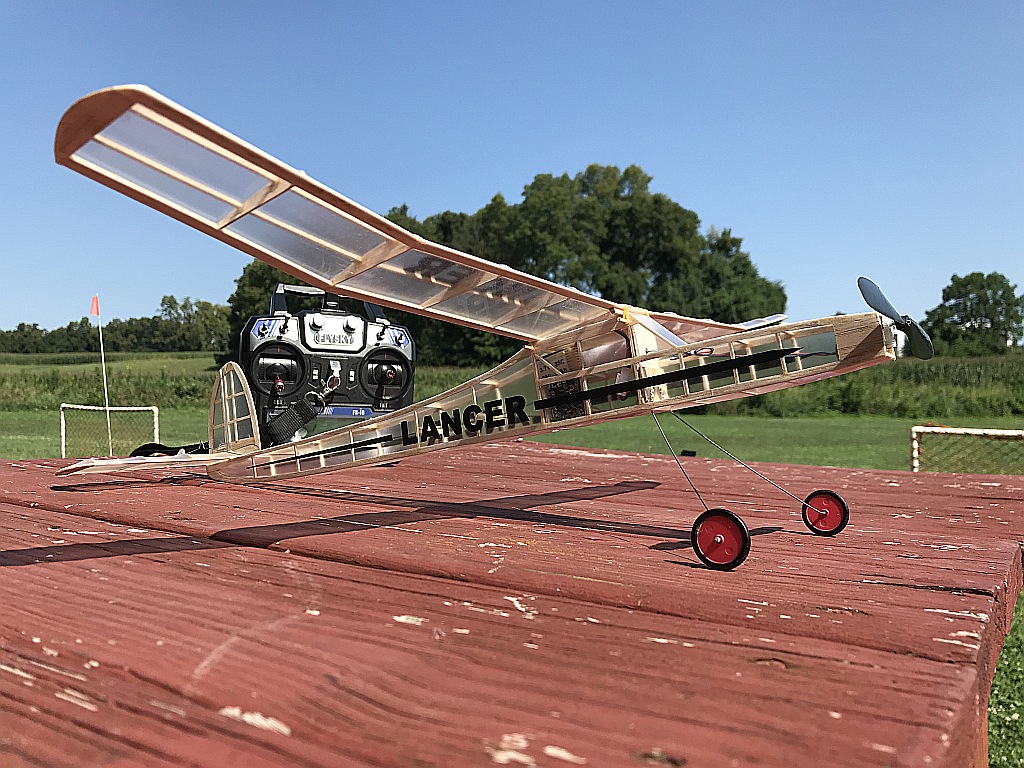 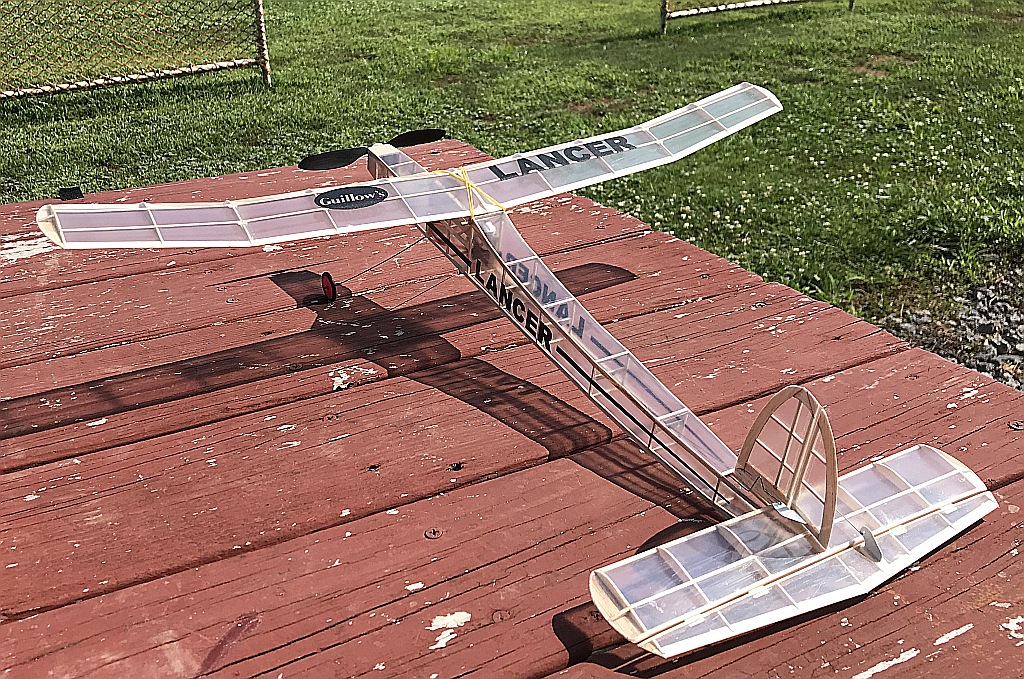 #31
This is awesome. Had to share it here because I'm thinking about making a larger scale Lancer. Not 8 feet though!
https://www.rcgroups.com/forums/showthread.php?1145634-super-super-sized-guillows-lancer

#32
TooJung2Die said:
This is awesome. Had to share it here because I'm thinking about making a larger scale Lancer. Not 8 feet though!
https://www.rcgroups.com/forums/showthread.php?1145634-super-super-sized-guillows-lancer

View attachment 138750
Click to expand...
If you were in Oregon I feel like my telemaster and that would have to do formation. I mean, they are the same size...

#33
Now that it's indoor flying season I've had the chance to fly several airplanes at the hockey arena. The only one that doesn't handle the way I like is the Lancer. I have to keep the power on all the time. It doesn't glide very well. I flies like it's a little tail heavy with the power on and glides like it's nose heavy. I don't think it has enough wing for the added weight of the electronics.

I stripped off the film and split the wing at the center. Then I built a 6 inch center section. 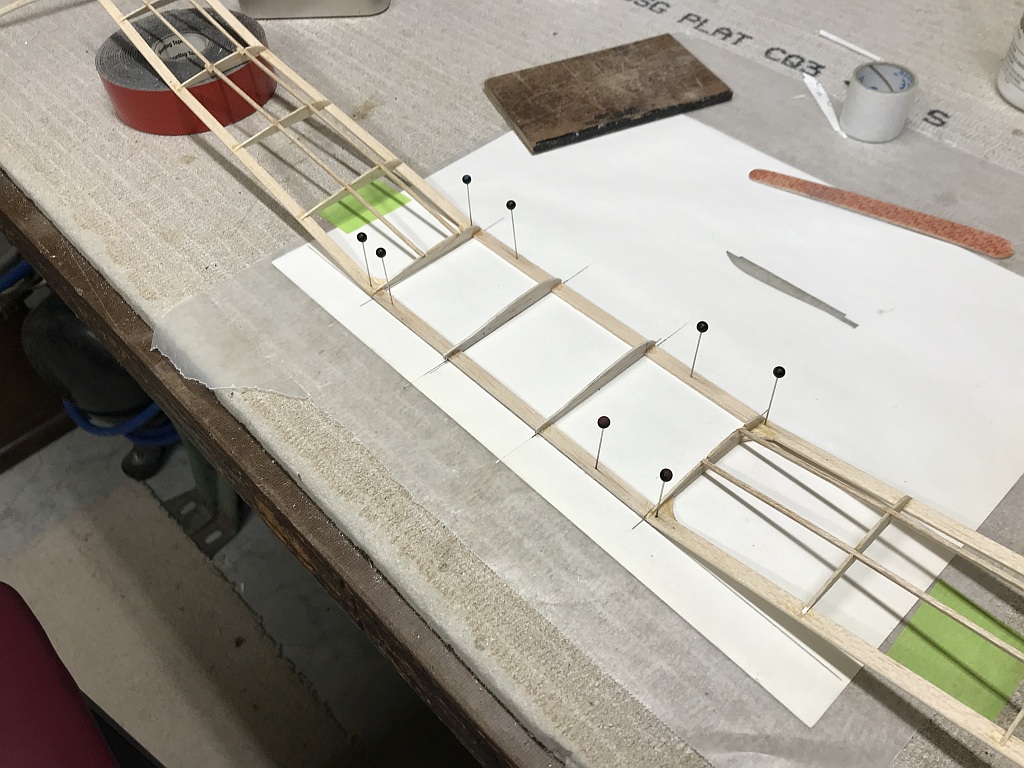 The Guillow's plans have templates for all the ribs. I made the spars from 3/32" strips instead of 1/16". 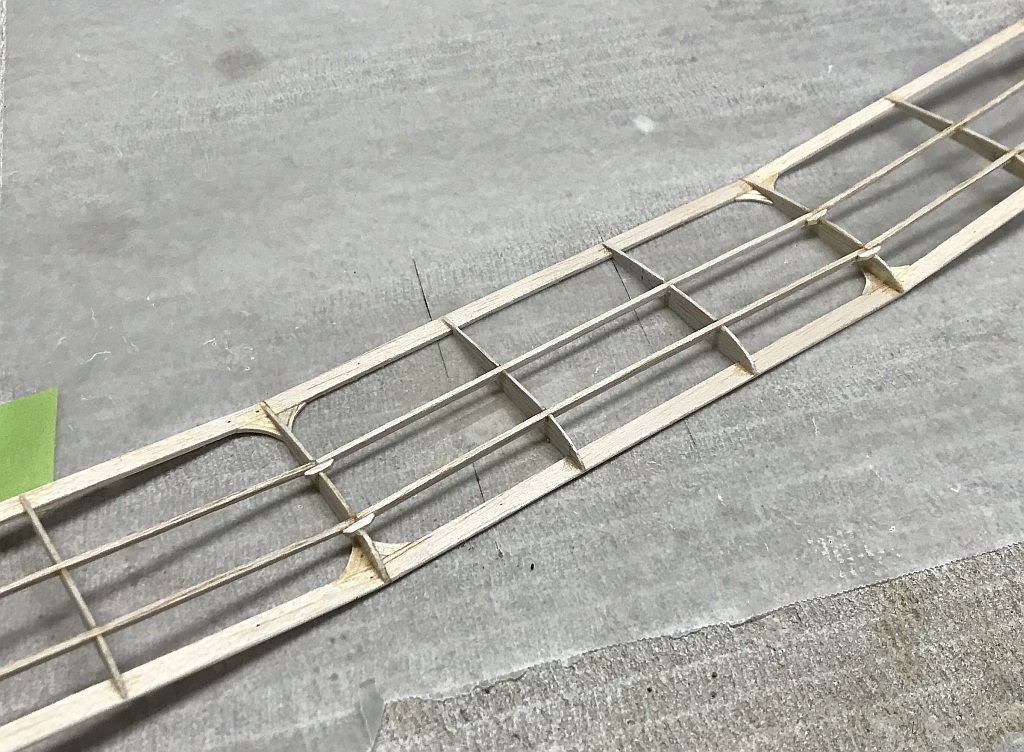 The wingspan was increased to 30" from the original 24". There is more polyhedral than before too. 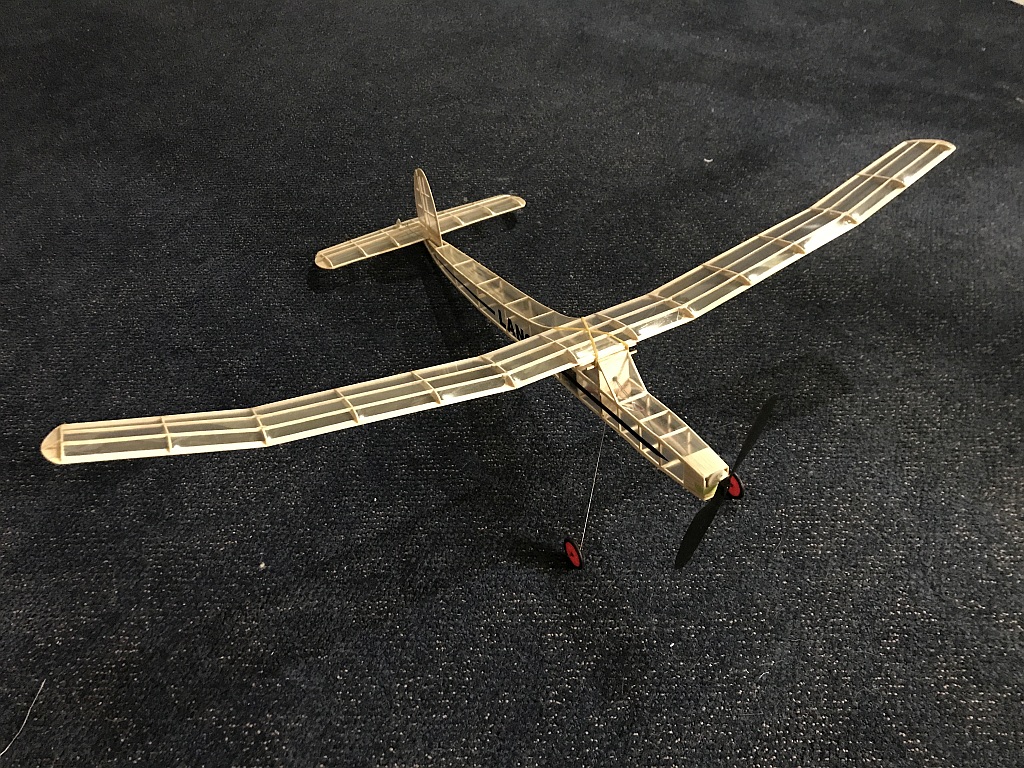 It's raining outside but I had to give it a couple of quick test glides. I taped the propeller gear so it doesn't spin and act as a brake. The results are promising. It glides much better and doesn't nose over. The next calm morning or indoor session I'll get to test it under power. I think it looks better proportioned with the longer wing.
Last edited: Jun 12, 2020

#34
Now the new wing is complete. Love this Cricut vinyl cutter. Cuts almost anything that comes in sheets from tissue paper to leather. 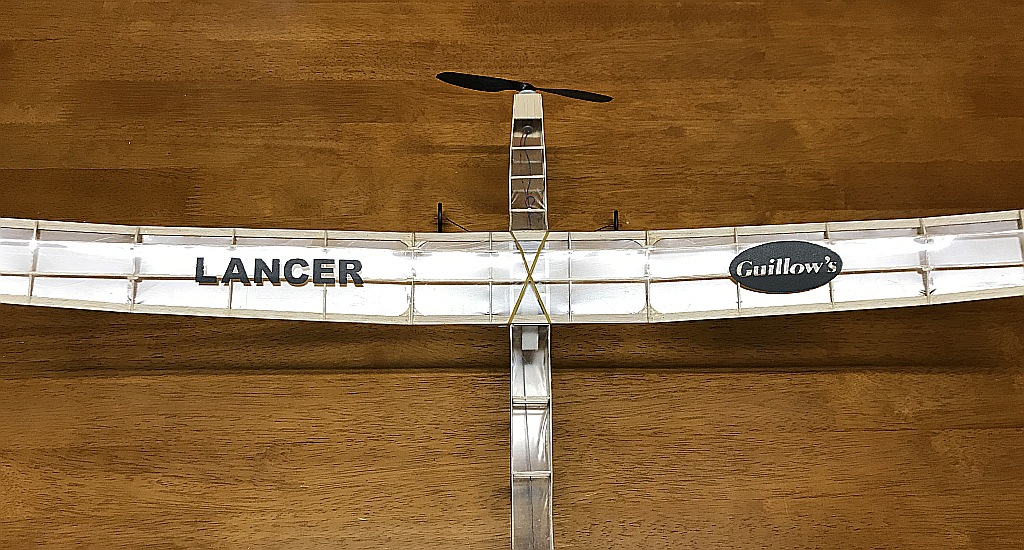 #35
Still no indoor flying time at the hockey arena for me. There have been two sessions I had to miss. But I did get a few minutes in the backyard to test the new wing. It is a big improvement. It's remarkable how much difference 6 inches and a bit more polyhedral can make. I think even if you're building the Lancer for rubber power it will fly better with a longer wing. It turns better, doesn't feel tail heavy under power and when the motor is off it has a pretty good glide. It glides better with the motor barely turning because a free wheeling propeller is acting like a brake.
Last edited: Jan 23, 2020

#36
The Lancer needs an update. I didn't get to fly the Lancer with the new wing indoors last winter but I have been taking advantage of some great weather and flying it at the club field. I finally got around to taking some video of it flying outdoors. It's much more fun to fly now with the long wing.