#1
It was the plane I learnt to fly with, an f-27b model complete with brushed motor. It could barley climb and had many many hard landings, and goal post encounters.
One day I blew up the battery so sought to upgrade. After some research bought brushless motor, 3s lipo, servos and esc and brought my battered F-27B close to 27C spec (I guess you could have called it a B+, kinda like the f-14B+) Did what the new one did but not quite the same.
Any how one day the motor mount came loose and the prop pretty much ate the entire left wing.
Not wanting to shell out for a new frame, I set about my second ever scratch build and used the right wing, sliced up the foam and traced formers, 2 months later I had a balsa clone of a styker. Weighed about 100 grams more but still flew just like a styker.
After about 6 years of service (and some abuse) my balsa stryker is not looking so good. One too many nose in landings. Took a beating for a balsa plane. Time to go again, and build a new one. I had tried to fill the void with the like of the HK skyfun but it just isn't the same.
Having some great success using XPS foam I decided to return to foam for my new plane. Traced out the dimensions on grid paper (old school I know), then over too the XPS foam to trace out, cut and sand.
Started by hot wiring the sheets to taper out to the wing tip, then traced out the plan onto the foam. Then grabed the sander and shaped b the wing sections. Looking pretty good so far! 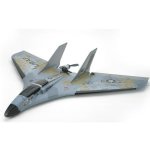 Staff member
Admin
#2
Ahhh, the old Stryker! Looking forward to seeing how this turns out.

The stryker is a classic. I got an F-27B platform from a friend before he wen't to college. Unfortunately it was mostly packing tape when I got it, but it's a great airplane. I hope yours turns out as good as the original.

#4
Finally got some time to keep going. Decided to enlarge the main body to allow payload/battery options. This is also why the body doesn't taper down like the original.
Verticals are shaped out of 10mm HK foam and strengthened with carbon fiber.
I have a spar in each with 1mm x 5mm strip. There are 2 6mm tube through the body, this also gives power options later as I'm pretty sure this thing is going to have a few hard landings!!!
Tossing up 2 motor options, 2836-2350kv running a 6x4 prop, or a 2836-1800kv running a 7x5.
Either way I have some 16gram MG servos, 40 amp turnigy plush.
Considering adding rudders like the 27q model has. Any how, I'll keep plugging away!!!

Mentor
#5
Good progress. Are you going to be finishing it in the same paint scheme as the B model?

#6
As cool as that looked, I am opting to cover this one in wing tape as it gives a lot more strength. That and the XPS isn't so easy to paint.
I will be doing a red/yellow black scheme so I can see it in the sky.
Love the B model colour scheme but was har to see at times In the sky.

#7
Here is a pic of the old balsa version. Beat up and missing it's vertical stabilizers

Body is coming up real solid! Span is actuley over 39 inche's, 2 more than the original. May help with torque roll.

Mentor
#10
Great work! That color scheme actually looks really great and it should be a lot easier to keep orientation than the camo.

Site Moderator
#11
Congratulations! Nice work and flight. How do you think the flight characteristics compare with the store bought version?

#12
Being the second one of these that I scratch built, this is so much closer to the store bought, it is a little heavier, but is bigger. I love the way this one tracks though.
These is a tone of room inside the fuse for later when I want to increase power, or mount fpv equipment.