The Coffee Shop - For general discussion

#361
IanT said:
On a seperate note I stuck 2 FRsky receivers on Ebay for £30 ($41), Ive had 3 bids on them so far now up to £34.50 ($47) and still have just over 5 days left .
Sadly Ive been spending again on Banggood so most of thats already spoken for.
Click to expand...
Why don't you wait until they are like vintage and rare or something before selling them lol?

#362
IanT said:
As in the film Waynes world where they banned people playing Stairway to heaven in the guitar store, most funeral palours do the same
Click to expand...
What's wrong with stairway to heaven?

#363
I like a whole lot of Rosey, TNT or Thunderstruck as another option.
Don't fear the reaper - by blue oyster cult

#364
Ketchup said:
What's wrong with stairway to heaven?
Click to expand...
Nothing wrong with it I play it myself occasionally, its just a song everyone plays on a guitar when they start off. Hence the scene on waynes world.

#365
Breaking the law by Judas Priest is just plain funny to me. As a bonus it sounds good too.

#366
IanT said:
Nohing I play it myself occasionally, its just a song everyone plays on a guitar when they start off. Hence the scene on waynes world.
Click to expand...
Oh ok then. I thought it was something like that.

#368
IanT said:
You want a nice pleasant girl with a nice smile and good sense of humor, who will charge your lipo's for you and operate your video camera while you fly
Click to expand...
What you don't want is one that's into RC because then you'll both be broke 😆

#369
SquirrelTail said:
What you don't want is one that's into RC because then you'll both be broke 😆
Click to expand...
Good point lol

#370
Sorry guy's thats my dream woman your on about, one that likes flying RC planes and has a wealthy father too

#372
IcedStorm777 said:
Couldn't have put it better myself. Generalization is IMO the most important tool for big decisions. After all any assertion I make about anything is generalizing. "This forum is awesome and so are the people" I just generalized that everyone on this forum is good. Is that true? Probably not, I'm sure there are probably some bad apples on here but it is generally a true statement.

P.S. I love this forum and the people on it.
Click to expand...
Well I gotta Double-Like that one too. Two thumbs up.

#374
Monte.C said:
Well I gotta Double-Like that one too. Two thumbs up.
View attachment 189128
Click to expand...
When you are in the open reactor but have to stay positive.

#375
IanT said:
The Chinese people I have had the good fortune to meet, have been lovely human beings so I can't really say anything on that subject. The same applies to most races of people I have met, most are pleasant human beings my daughter in law to be is Polish and a lovely warm hearted, intelligent girl. There are always people in every race that are just horrible human beings, or not worth the effort of being civil to but that can be anywhere on this planet not a specific race.
Click to expand...
I won't be arguing that one bit. I fully agree with you. And there are a lot of Chinese in NYC, and I've liked most of the ones I've met. There's people here representing every corner of the globe, and sometimes they seem to all be on the same subway car. Unless they smell like a homeless person sleeping on the subway, or they have a knife in their hand pointed at me, every individual gets every chance with me. AND it's perfectly good and healthy and smart to generalize about a group that I've had any experiences with.

#376
IanT said:
Nothing wrong with it I play it myself occasionally, its just a song everyone plays on a guitar when they start off. Hence the scene on waynes world.
Click to expand...
I’ve been playing guitar for two years, and I’m quite good at it, the hardest thing I can play would be the outro solo in Fade to Black, and yet I’ve never learned the opening riff to stairway

#377
2jujube7 said:
Random question: what kind of music does everyone like? My best guess (just from the nature of the forum) is 70s rock. It's also what I listen to.
Click to expand...
70's rock is guaranteed good vibes. My girlfriend and I love it - especially glam rock. She loves the darkness and I was obsessed with KISS when I was 16. Seeing them play at Download Festival in 2015 was dream I never thought would come true. Funny thing was, I forgot they were playing. I was chatting to the stewards saying; "Rise Against are the only band here I really know, I'm just here for them and my first festival experience." Then they went "What about KISS?" "KISS ARE PLAYING?! :O "

But of course, if you're my generation; 70s rock is the Gateway to Heavy Metal, which takes you to heavier metal (Like Slayer which I'd say are heavier than Iron Maiden, but they're not what I'd call Death metal). Then there's all the sub-genres of metal and punk... I love Punk Rock, a little bit of Pop Punk, Emo - which has its origins in Punk but has more recently become an amalgamation of Post Rock and Math Rock (the Midwest Revival). And all the other electric-guitar-centric songs that are hard to pin a genre too...

There's been an 80's Synthwave revival movement which is what inspired me to give a plane this paint job and film it flying to: 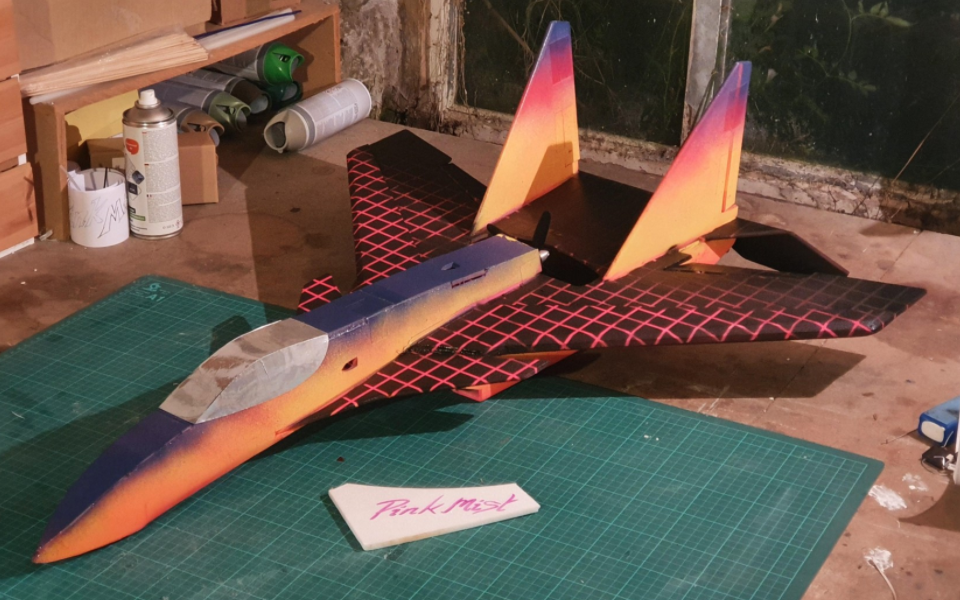 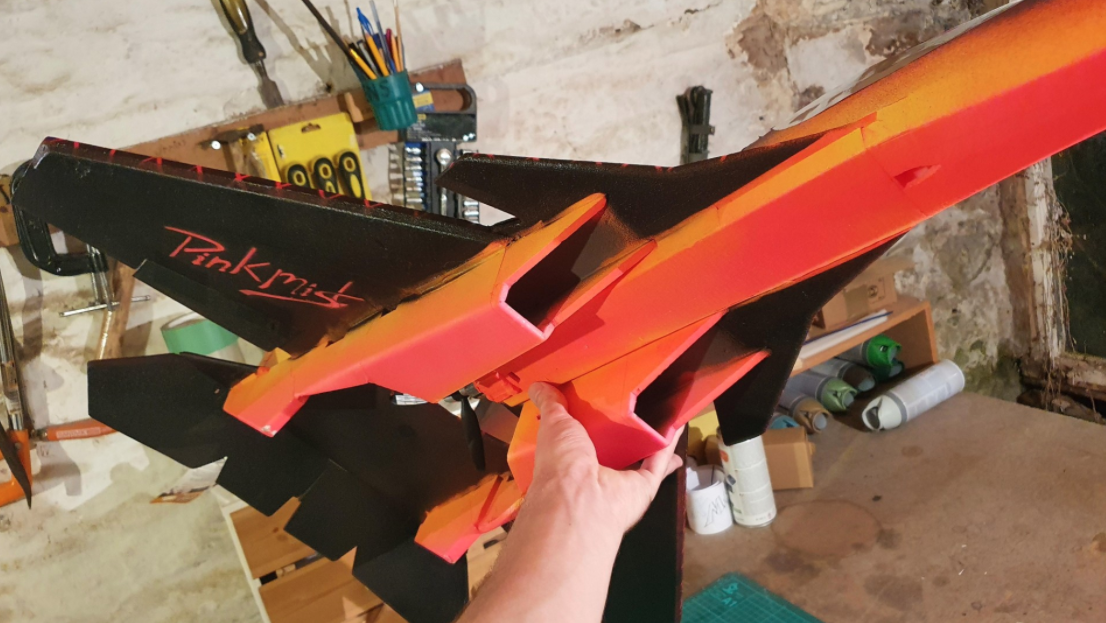 And then there's the really weird stuff that many wouldn't even consider music:

#378
Samh said:
naaa, but there are plenty of fine girls but none wanna give me chance lol
Click to expand...
I know, it's tough. "Turn your head around" is easy to say, not easy to do. I want to tell you to put your mind in the future and think about how awesome it's gonna be when you & your beautiful and impossibly awesome girl are together. It's impossible that this girl wants me. But here she is wrapped around me with all her might, and she feels the same way about me.

Back in the 70s rock era we developed an attitude, because that's how it was. The music was badass. How about that line from "The Boys are Back in Town"?

Ha! "If that chick don't wanna know, forget her."

#379
Ketchup said:
I can do one better. Find a girl that will build planes and charge lipos with you and fly with you.
Click to expand...
She's already taken. That one couple on Youtube that flies and reviews a new toy plane on every episode.

#380
My only bad experience has been with WISH recently and although its a Chinese company, I don't blame the individuals but the operation of the company and how they dealt with my complaint.
I buy so much stuff off line in a year I lose count of the number of purchases I make. I even expect errors and mistakes to occur occasionally its human nature. But the way in which a company deals with the error and rectifies the mistake, says a lot about that company. I give WISH a big even though in the end I finally got the item I ordered and a refund.
Banggood on the other hand are excellent in every respect, I had a motor fail and notified them. They offered a refunded or replacement within 7 days, the service was excellent the new motor arrived in 2 weeks.
Ive only just started to use Aliexpress, so can't comment on them yet.
You must log in or register to reply here.
Share: Facebook Twitter Google+ Reddit Pinterest Tumblr WhatsApp Email Link
Menu
Log in
Register