#1
Hello Flite Test Community, I'm excited to share to you a prototype of mine, the C.8 Swoosh Mk II 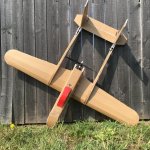 The C.8 is the second version (technically third) of my original scratch build of the same name.
I've used the basic Flite Test build techniques to construct the fuselage and tail surfaces, while a modified version of Nerd Nics speed wing gives me a smooth and sharp plan-form 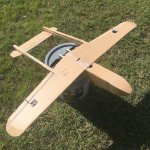 The plane was designed for high speed flight, so it was lots of wooden support in it, including a wooden spar.
I have flown it already and it flies steadily and quickly through the air. I plan to post the plans for the prototype in an article in the future, after some revisions.

#2
Nice looking plane. I was wondering something. I had a plane long ago with the double boom tail. As normal being young I killed it breaking the booms. Seeing that bottom view makes me wonder if building it in a high wing configuration would increase the durability factor as well as making it an easier flying plane for newer pilots. This also would give room for mods like landing gear or floats.

I know you mentioned speed so nor sure how much going to a high wing would effect that for your design. Keep running with your process either way as I am sure it will soon have fans building it.

Mentor
#3
Nice looking plane - and glad to hear you're going to release plans!

#4
Flight videos are a bit more illusive for me at the moment, but I do hope to get video someday soon before the next build.

#5
Too anyone interested here are the prototype plans for the Swoosh Mk II. Things to note, the templates for the tail booms are a print for only one, so they would need to be doubled up during building. Most of the other parts have their own template, but in order to clarify what parts go where and are which I do plan on posting a build article in the future (sadly it likely will not have a video).

#6
Neat build! Besides looking cool, I imagine the long nose must be useful for battery placement, with 4 servos in the tail booms and the motor also behind MAC.

#7
Thanks, the first version of this actually did have balancing issues, so I had to move the wing back and shrink the tailbooms to shift the CG forward.