After the success of FFAS'18 with $680 being raised, I am more than happy to announce another Veterans Airshow for Flite Fest Ohio 2019!


Why have an airshow?

The men and women in the armed forces of the United States give a lot, and some gave all, to defend this country and our freedom. Being part of an airshow at Flite Fest Ohio this year is the least we can do to honor all veterans who have served and those who still serve. 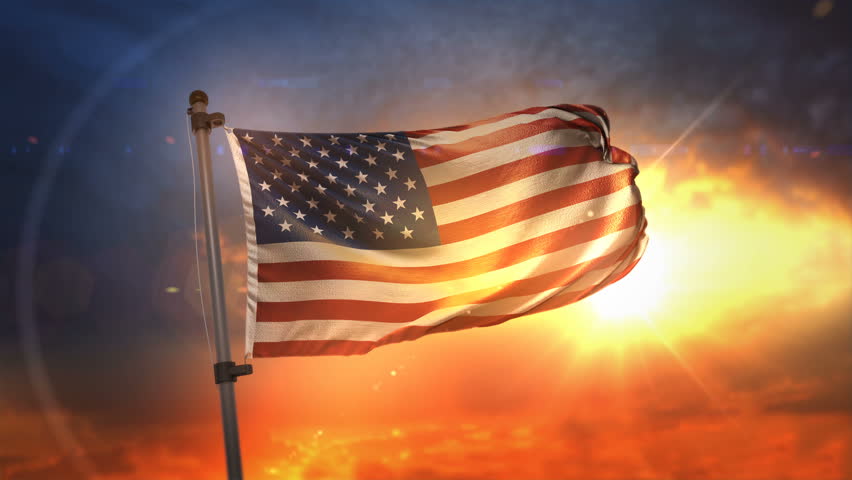 How YOU can Help

If you want to help honor our men and women in uniform, and those who served before them, all you would have to do is build any plane that was previously or is still used by any branch of the U.S. military. Just to open the options a bit more, any allied airplane in WWII can also be used for this event. After the plane is built it should be decorated, whether it be a simple patriotic design or a super scale model, just make it look really cool, and here are two great examples.

Another great way that you could help is through donations at the event, or through purchasing one of the planes after the airshow is over! 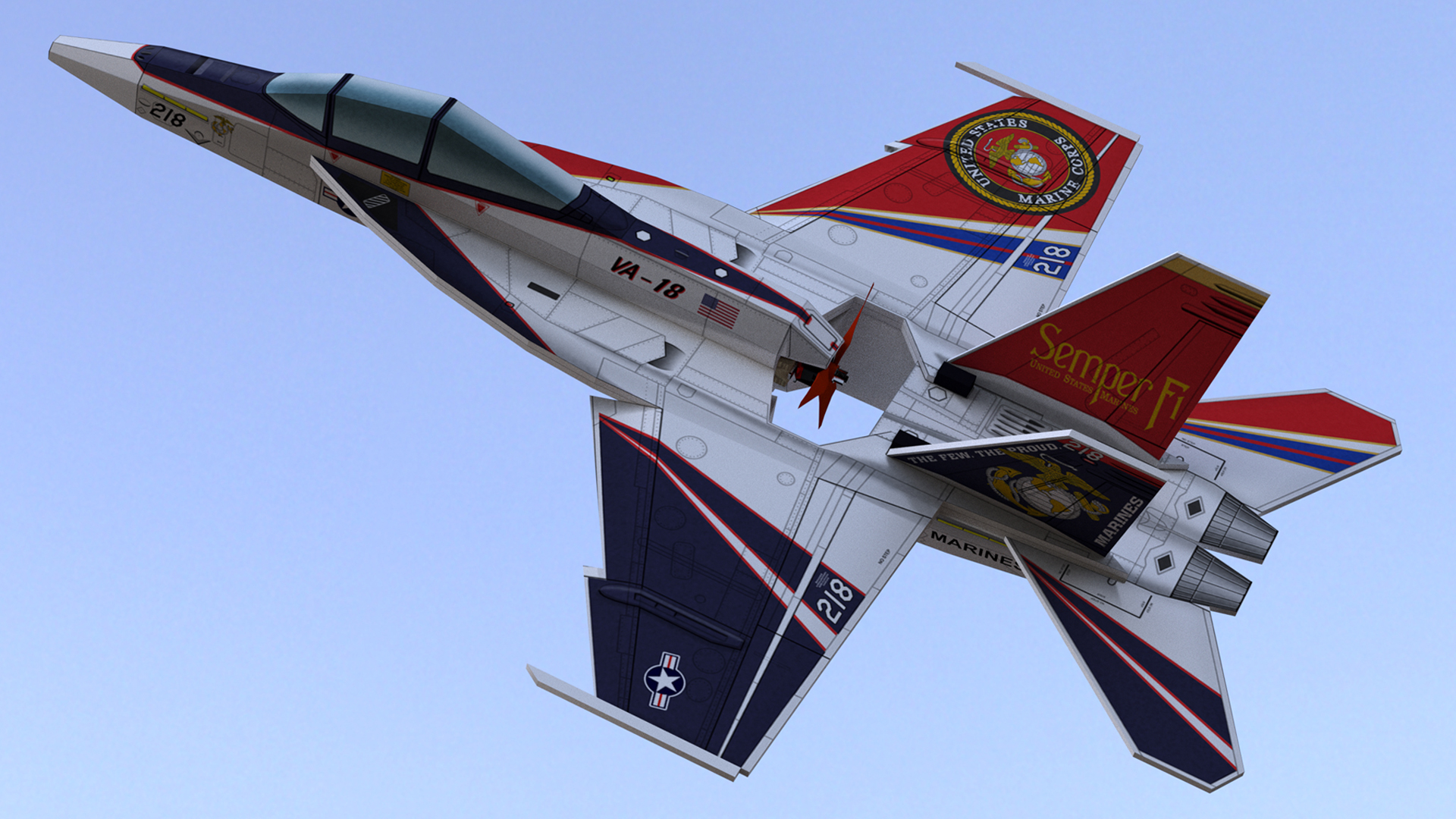 (Digital render of the Marine Corps F-18 from FFAS'18) 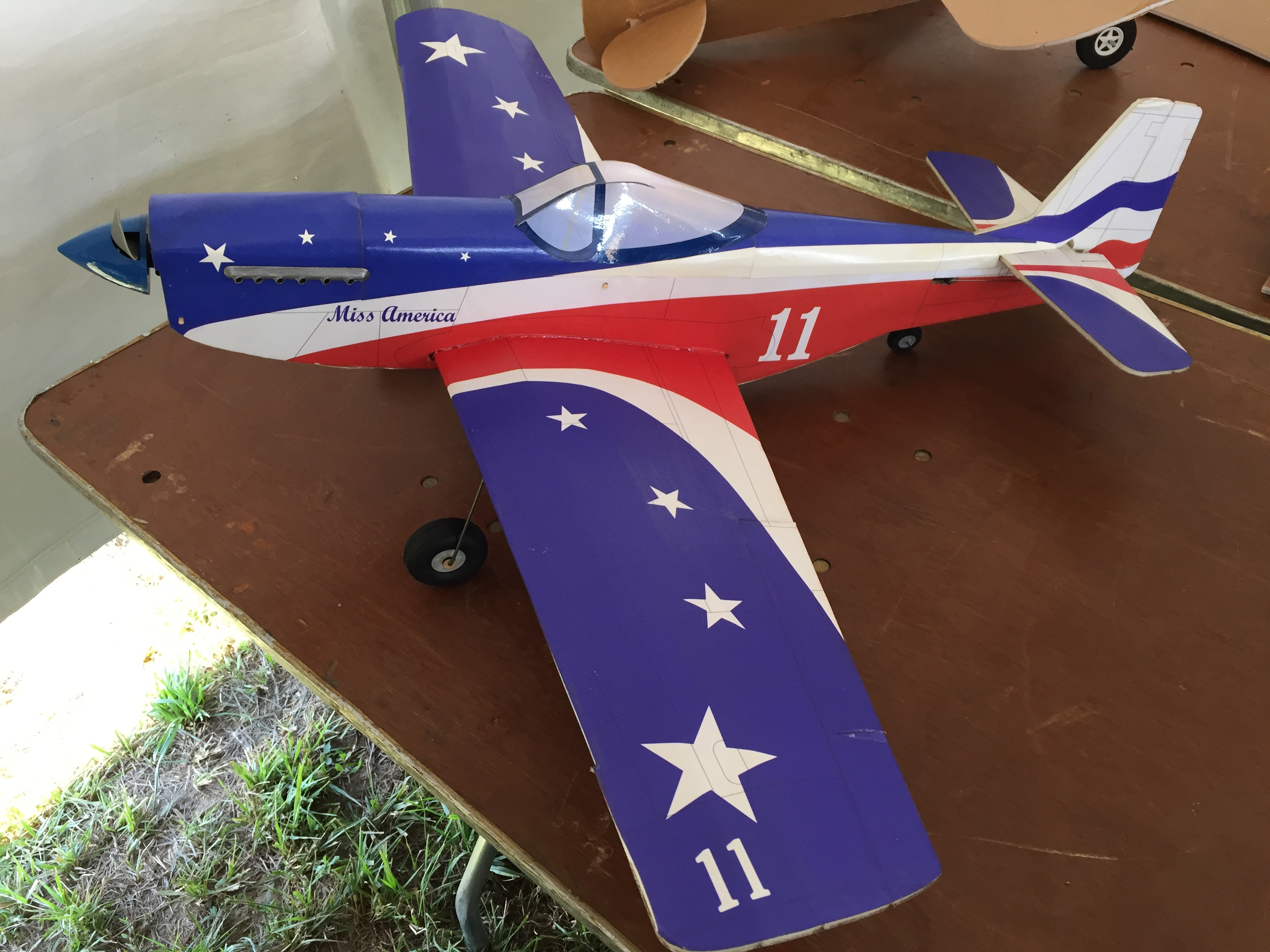 I am hoping to be able to get all other planes grounded during the airshow, but I am not sure how many people are willing to participate. The more people the better chance we have to show off the planes and raise more awareness for the auction. As I mentioned after the air show is over an auction of all the airplanes will commence, with 100% of the proceeds going to support the Fisher House Foundation. The planes should be swappable if you would like to keep your more expensive electronics, servos, and any other non-removable electronics stay with the plane (glued in motors/escs, EDFs etc...).

Flite test is also SPONSORING the electronics for the airshow for the second year now, make sure to say thanks to FT!

How to enter
It is simple, just make an official entry post on this thread like this...

(Your name) - (Airplane) FFAS'19
Include a brief reason for your plane choice. (Two or more people can build the multiple of the same airplane, but a variety of aircraft would be preferred)

If you enter and cannot complete the plane in time for the air show, or for some reason can not attend FFOHIO, you will not be held accountable in any way for your entry in the air show.


End Goal
The main goal of this air show is to honor veterans, to support the Fisher House Foundation, and to show all of the great things this community is capable of while supporting a good cause.


Help us out by joining today!

We all build A LOT of planes and could sacrifice some foam and servos for a good cause.


If you have any questions or recommendations please leave them down below!
Last edited: Mar 24, 2019

Mentor
#2
Great to see you pick this up again @foamtest - where have you been - what ya doin these days?

I won't be there but will start think about how I can support from afar.

#3
I have been busy with school and with applying to the air force academy, I wasn't accepted this year but I'm already waiting to start my application again for next year. Other than that slight let down I've been doing quite well with work and school, I just haven't had the time to build anything or do anything other than school and work.

As for how you could help, SPREAD THE WORD LIKE WILDFIRE! The more people involved the better the airshow will be.

Mentor
#4
foamtest said:
I have been busy with school and with applying to the air force academy, I wasn't accepted this year but I'm already waiting to start my application again for next year. Other than that slight let down I've been doing quite well with work and school, I just haven't had the time to build anything or do anything other than school and work.

As for how you could help, SPREAD THE WORD LIKE WILDFIRE! The more people involved the better the airshow will be.
Click to expand...
Cool - best of luck with the new application. As for spreading the word, I've updated my sig.

#5
Awesome! I couldn't figure out how to make my link red, I tried lol. Thanks for the help, my goal is to raise $1000 with this airshow, seeing as we raised $680 last year I bet we could push 1k this year!

#6
I think this is a really good idea, don't know how I missed it last year??

If I can make it to FF I'd gladly help out in any way I can!!

#7
Okay guys I have some good news, at FTs open house I was able to ask Austin about sponsoring the electronics for the airshow and they are more than willing! So don't be afraid to enter, it'll only cost you foam, time, and a little bit of paint!

#8
Also for my official entry

Foam Test - Dat Rhino or Dat Eagle, FFAS'19
I flew the Marine Corps version of Dat Rhino to honor my stepfathers service in the military last year. I am most likely going to fly the navy one this year in honor of my great grandfather.

IF YOU ARE PARTICIPATING IN THE AIR SHOW, PLEASE MAKE AN OFFICIAL ENTRY LIKE THE ONE ABOVE!
Last edited: Apr 4, 2019

Edit:
I will probably have the Army Guardrail done by FF, but I doubt the skin will be ready by then. That might have to wait until next year before it is official.

I had it ready for last year actually, just wasn't able to attend. It's only been flown twice!

#14
Perfect @rockyboy
Now since yours is finished you're going to have to send pics...

Mentor
#15
foamtest said:
Perfect @rockyboy
Now since yours is finished you're going to have to send pics...

(I'll add them to the first post showing planes for this years event)
Click to expand...
I'll get them posted tonight

Mentor
#16
Day late but here she is, hanging from the ceiling waiting to get back in the air 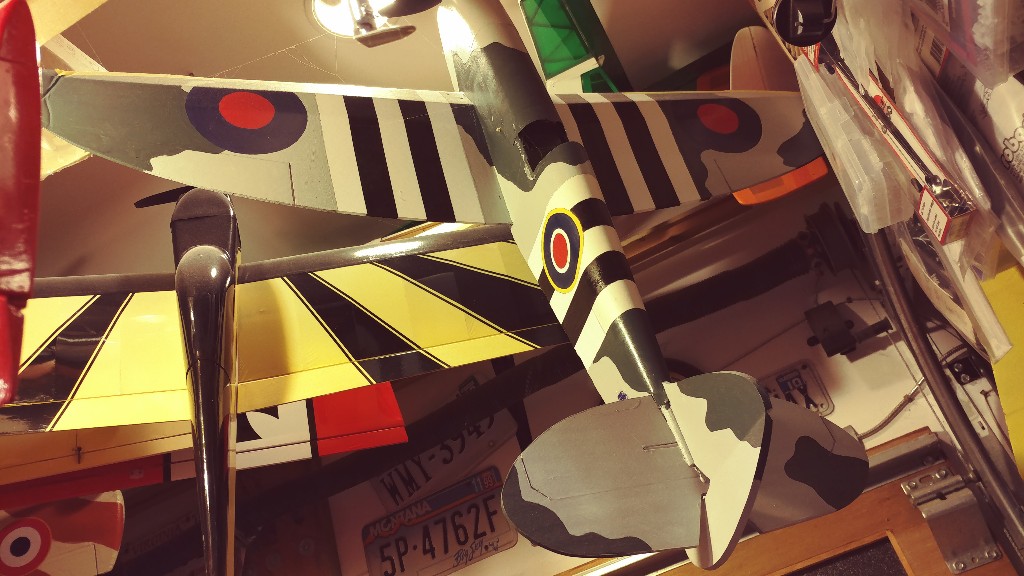 I need to take her to the field next time I go flying. Even if I do create a lot of dust building things, it's a shame to see her like this...

She did make it to the field in early April and had three great flights! Then I broke the tail pulling her out of the car at home All fixed up the same day and ready to hit the field again soon!
Last edited: Apr 29, 2019 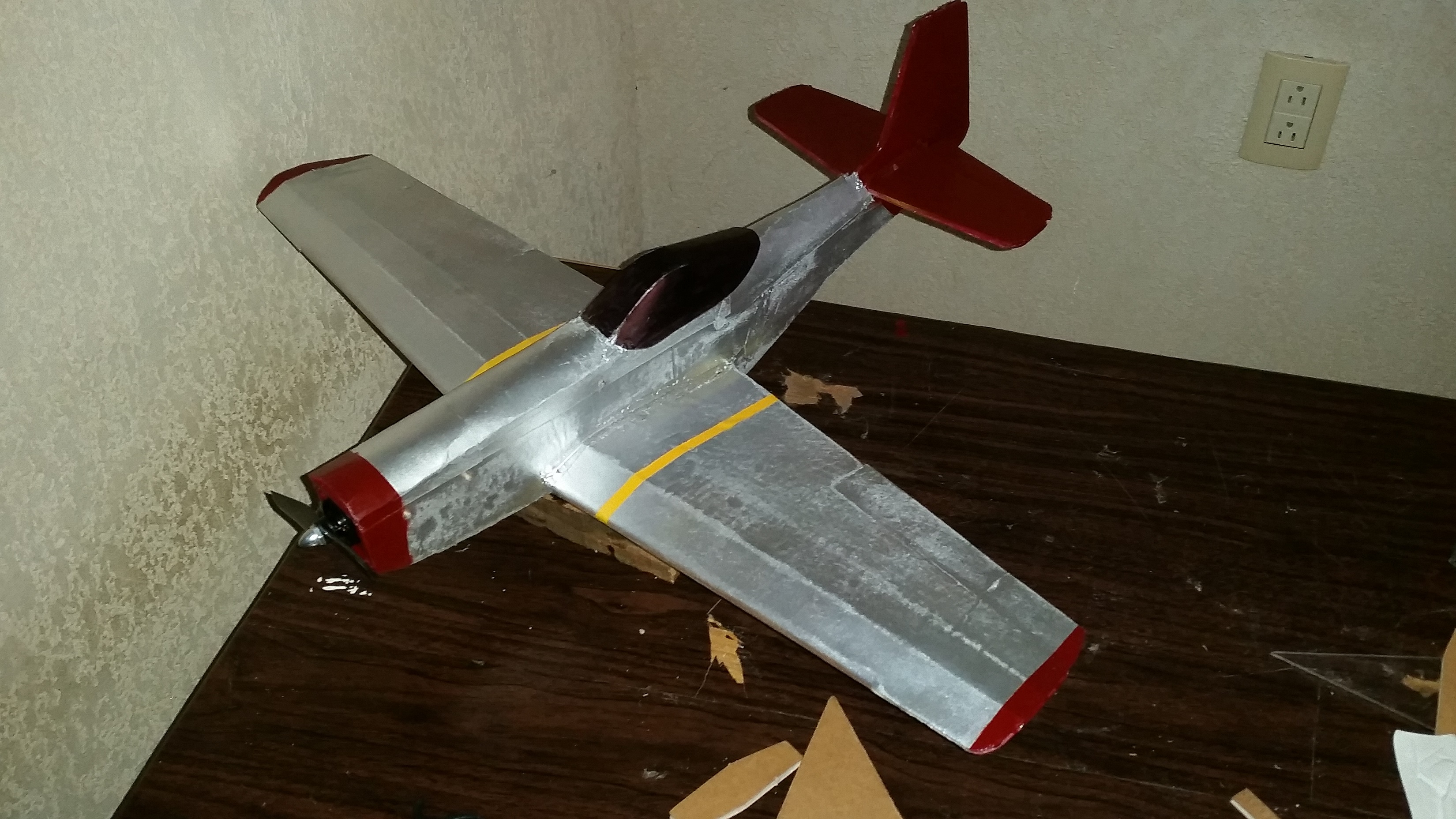 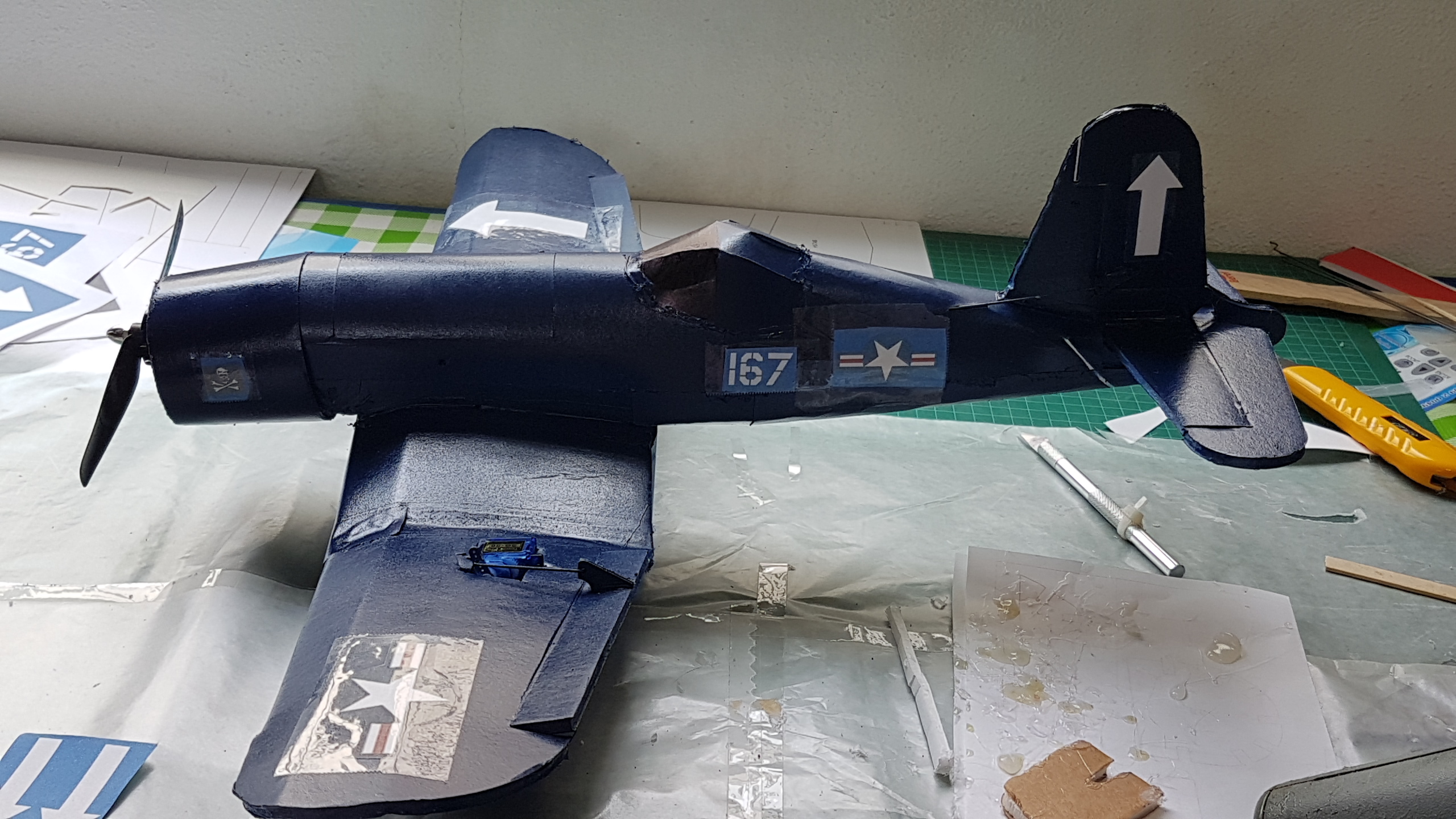 #19
Raid stripes, raid stripes, and more raid stripes. I have to build a warbird soon. Maybe the new p40? Hope they won't be too oversaturated if I do come to FF this year.
S

My reasoning for this plane is that I've always had an interest in the WW2 Airborne. I was looking for a plane to build for the 75th anniversary of D-Day, and learned this plane lead the airborne invasion. Also that it was being rebuilt, so, I decided to build it using Vincent Unrau's plans of the C-47/DC-3.
You must log in or register to reply here.
Share: Facebook Twitter Google+ Reddit Pinterest Tumblr WhatsApp Email Link
Menu
Log in
Register