Mentor
#1
Introduction
First heard the name of this plane during the "We tried to fly it" video of the Bull Rider. Josh mentioned a "GBR3" plane and it took me a little time on Google to recognize that he actually said "Gee Bee R3"

The "Gee Bees" were racers designed and built in the late 1920s and early 1930s by Granville Brothers Aircraft and appeared unique as massive engines to which someone had bolted on two stubby wings. They never designed an R3 however - its a fictional plane. The R3 was designed by Mirco Pecorari and ultimately became an RC model (although I believe there is / was some legal issues between Mirco and the company that brought out the original RC models). There are allegedly plans to build this as a full scale plane but I am not sure what the status of that project is.

Design
While looking for a three view, I found a really nice set of plans by Peter Marshal which are freely available at AeroFred. They are in PDF format, so I took screen captures of the various pages and imported the images into Sketchup. With these images I could draw out the profile view, half of the plan view, tailfeathers and wings. There was also a nice selection of fuselage cross section pieces that I could use to fill out the 3D fuselage shape in Sketchup.

I modified the wing to fit an FT flat-bottomed type wing build approach, the main changes being replacing the curved leading edge with a straight leading edge.

I brought the flat panels together in three dimensional space, divided the fuse up into reasonably sized sections, and planked the fuse. I also added the landing gear shapes but I probably won't build these, at least initially. The canopy was added as well as a motor mount.

Final plane looks pretty good. I'm not sure that it fully captures the R3 shape but I'll have a better idea once I convert this to foamboard. The parts were unfolded into plans and are now ready for printing.

I am going to use a Power 15 motor from E-Flite which is ~550 watts and a 9x9 prop. This is the same power setup I used on @rockyboy 's Caudron 460. The wingspan is only 30 inches so I am pushing the wing loading into the high teens in order to make her as fast as possible with the chosen power setup.

Plans are now added to this post. Zipped file includes the Sketchup Model, .DXF and DoubleCAD XT .2CD files, Full PDF plans and decals in PDF format which were used for the following build: 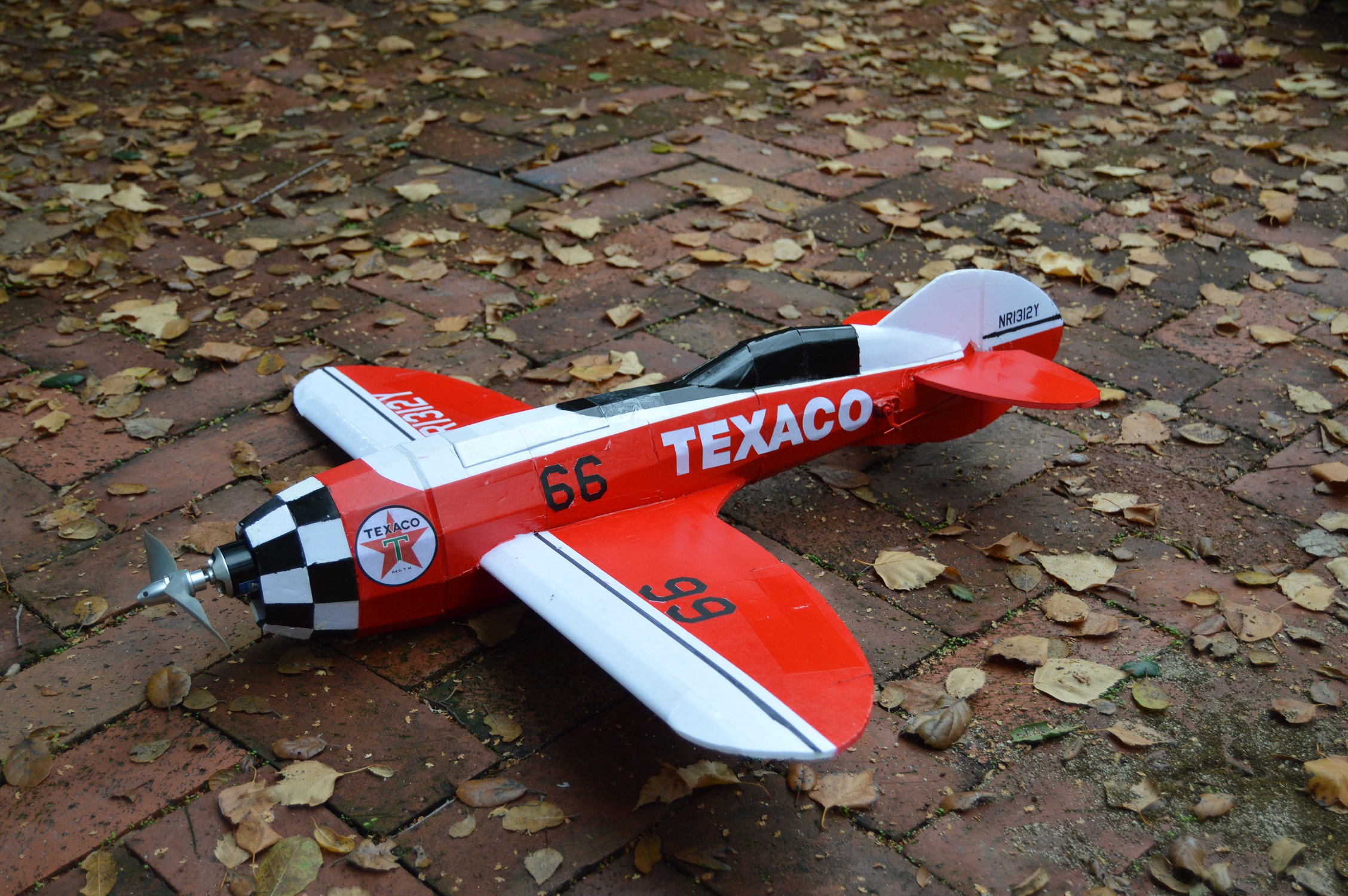 Mentor
#3
Awesome project! I love the lines on this plane - really looking forward to watching this come together!

Mentor
#4
Nice! I had an ARF GBR3 a few years ago. Put it into the top of a tree about 150ft over a creek/river WAY out at our field. Couldn't get it down and never did get it back. I'll be watching with interest.

#6
Watching! Looks like a fun one. Can we get some size specs? Would love to build one of these, but need to make sure I have the proper motor for it.

Paracodespoder said:
Watching! Looks like a fun one. Can we get some size specs? Would love to build one of these, but need to make sure I have the proper motor for it.
Click to expand...
The current design is a 30inch span and about 28 inches long. The power system I intend to use weighs 18oz (way too much power) and I think I can keep the airframe to 7 or 8 oz, so pushing 19 / 20 on the cubic wing loading. It should carry a C-pack spec motor easily enough or even something a bit smaller. Might try her with the NTM 2826 1200Kv first, or I might just go for broke with the Power 15 motor.

Let me know if this answers your question.

The current design is a 30inch span and about 28 inches long. The power system I intend to use weighs 18oz (way too much power) and I think I can keep the airframe to 7 or 8 oz, so pushing 19 / 20 on the cubic wing loading. It should carry a C-pack spec motor easily enough or even something a bit smaller. Might try her with the NTM 2826 1200Kv first, or I might just go for broke with the Power 15 Let me know if this answers your question.
Click to expand...
Yes that answers my question, all I needed was wingspan, but thanks for the other info. I think that it would work even with an f-pack if built light enough( it would be underpowered though). The c-pack would probably be a lot better though as the bloody baron has a 30inch span and works great with the c-pack.

#9
I see all your numbers in the first post. Do they really matter for these types of planes.

To me they seem to just be pulled thru the air by shear power more then actually flown with then stubby wings and pudgy fuselage. .

Will be watching to see how this goes so good luck on a successful first build.

#11
BS projects inc. said:
does anybody else thing that the p-47 is just a gee-bee turned into a warbird lol
Click to expand...
I see what your saying but GeeBee was the smallest airframe attached to the biggest engine the P-47 is actually huge and well armored, making it the "just right". The Bearcat is a closer match in my opinion light small and stumpy with tons of horsepower. just my opinion.

#12
Not in the modern civil aviation world this is equivalent to the GeeBee. The Citation X+ (though the photo is the Citation X) is the current fastest business Jet .935 Mach. Yes I am biased, I worked on them and now teach Maintenance on them (11 years on this model). 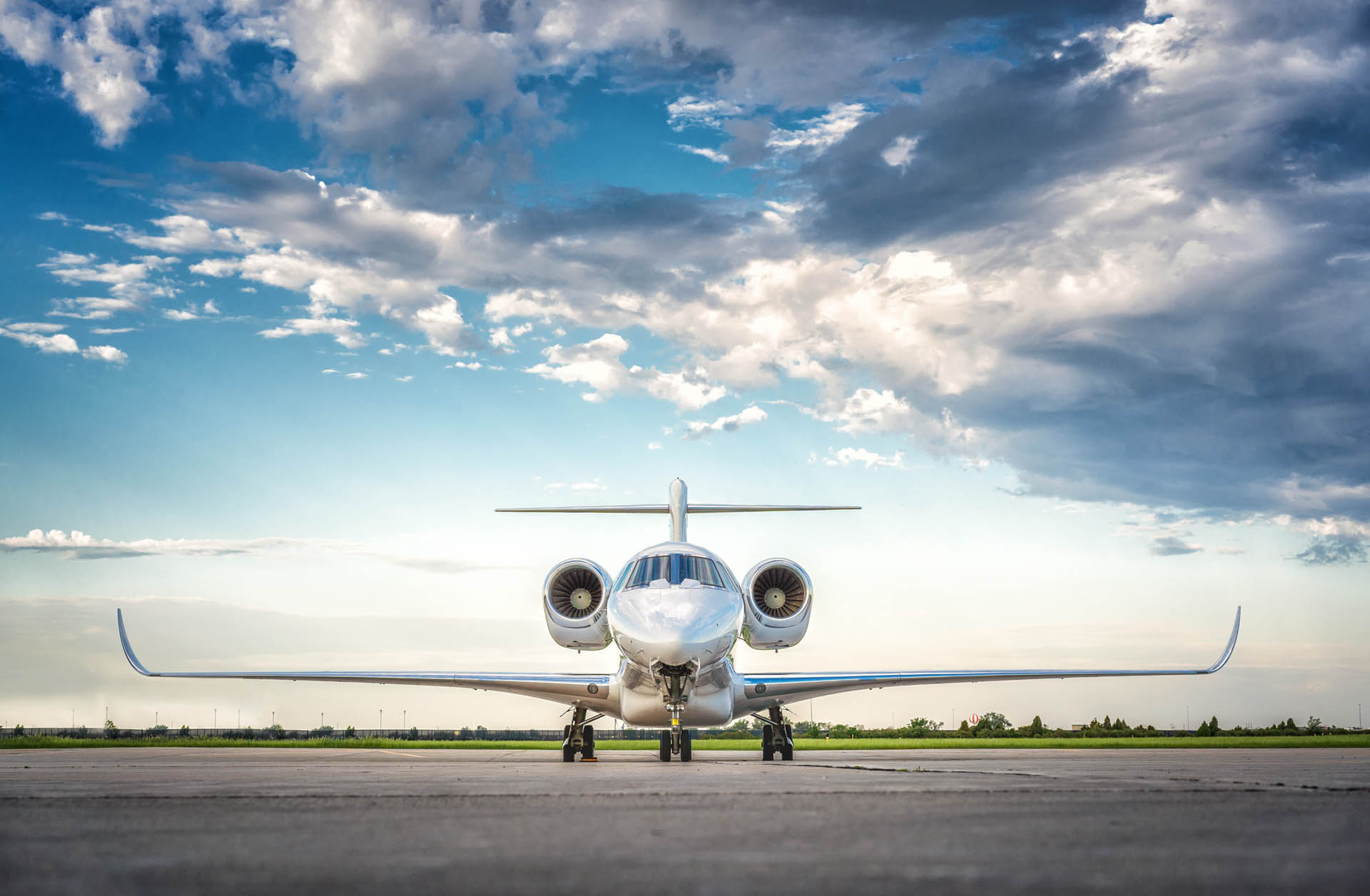 Mentor
#13
Made some progress on the build.

Started with the fuse parts and frames as the gorilla glue needs time to set. Once cut the pieces are dry fit into the frames. The motor mount is also dry fit.

Yet again I managed to design a part where too much foam is competing for too little space - the end of the tail cone is gonna be a pain to glue up - oh well... 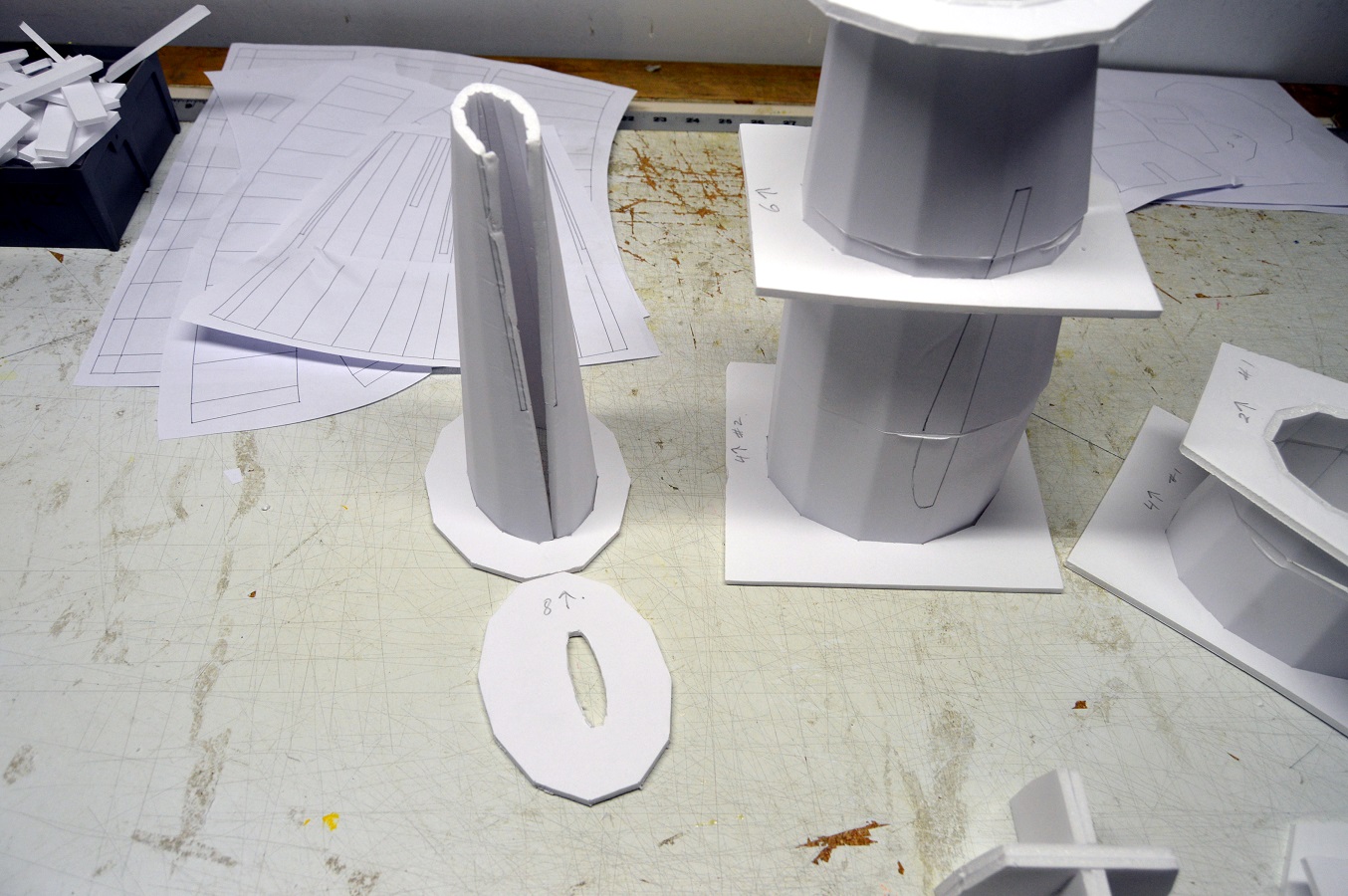 I wanted to re-create the effect of a cowl so I ironed in a bevel on the outside of the central fuse part with a matching bevel on the inside of the nose part. Then the two were dry fit to make sure I would be able to glue them up straight. 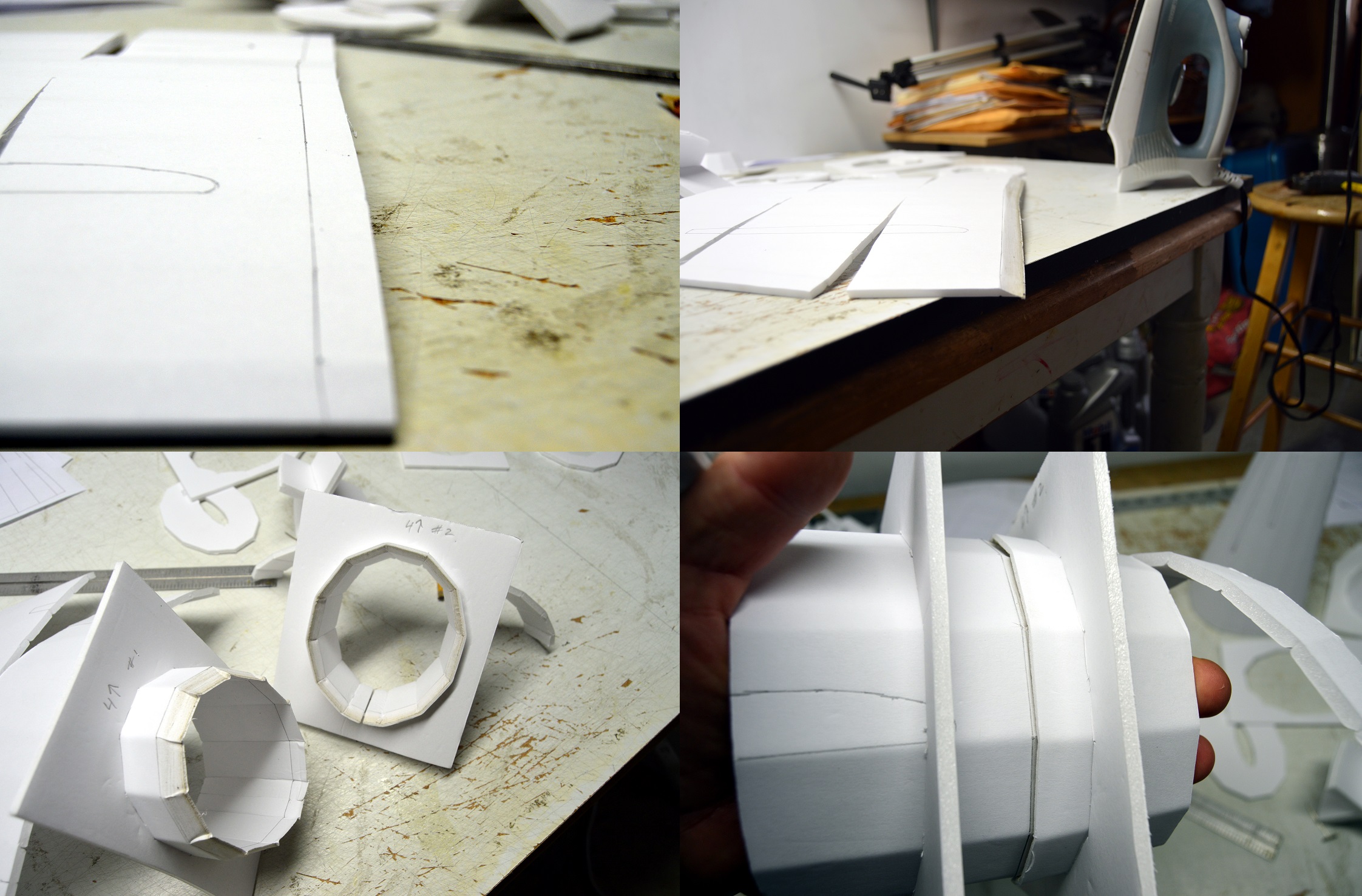 Motor mount was glued up, installed in the nose and the nose was attached to the fuselage...

And this is what she looks like at the moment. 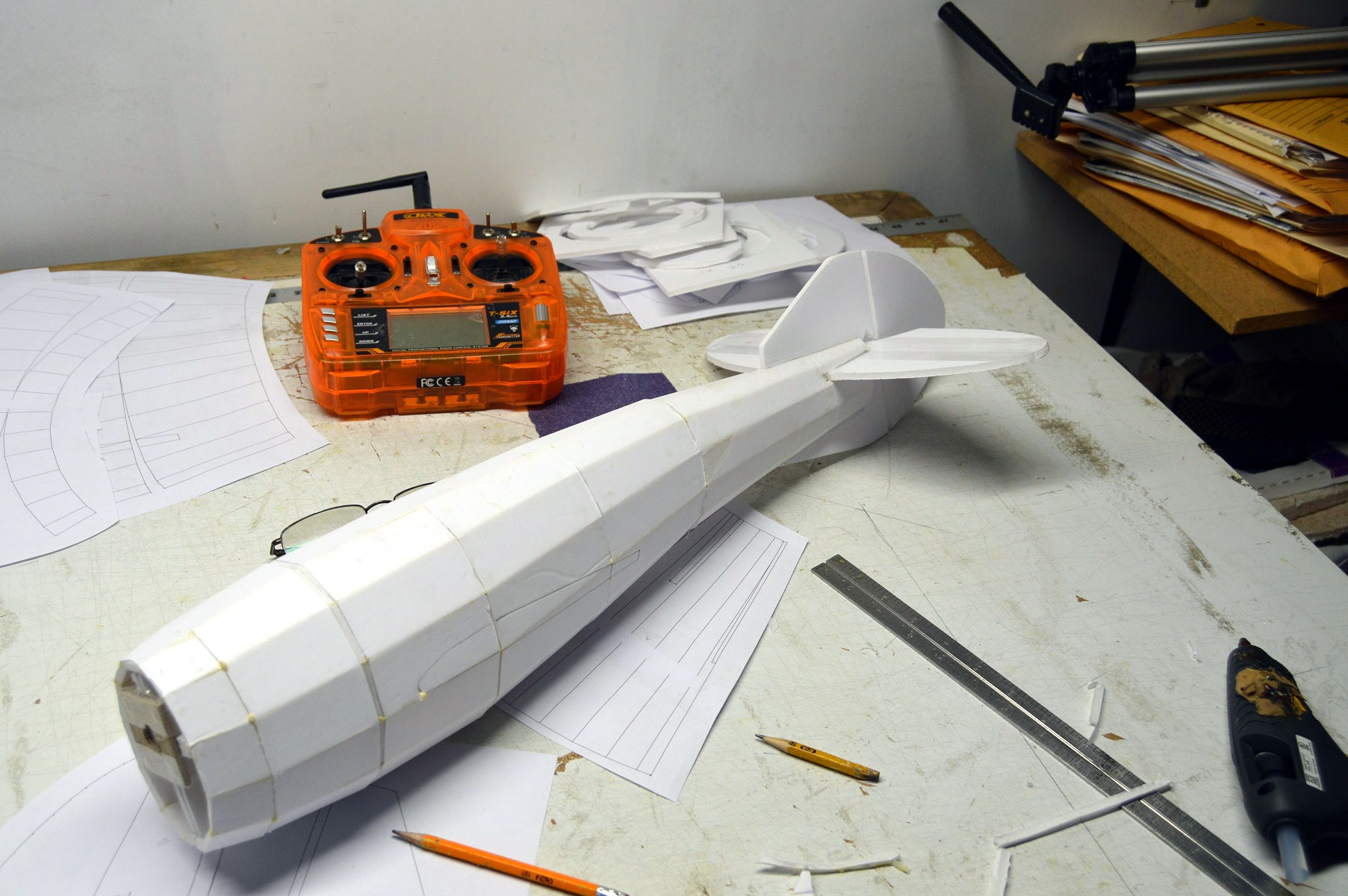 #14
Looking good so far. I like the faux cowl effect and the helper tools.

#15
Holy Wing Loading Batman!!!!
Those Gee Bees were certainly pushing the envelope! GB1 was a total Widowmaker.... But flown with extreme skill, it was unbeatable in Air Races of the Day!!

I can't WAIT to see how this Bad Boy Flies.

Mentor
#16
Made a lot of progress on the build.

First up the canopy - had to do this twice because the part disintegrated the first time so I covered the outside of the part with packing tape to stengthen. Folded okay but needed a little pressure to glue it on.

Next, the wings. Cut the four panels separately then taped and glued them together, Added the foam spar and a wooden reinforcing spar, pocketed the servos, and she was good to fold and glue.

Cut out the wing holes and installed and glued up the wing.

When installing the wing I realized that to extend the wing holes to accommodate the wing fillets was going to be too much, so I removed this piece from the wing and cut the two fillet pieces which were then glued to the wing trailing edge and fuselage.

Used an online calculator to estimate the CG, ultimately marking the top surface of the wing at 1.75 inches from the leading edge (plane will be balanced upside down).

Then I could cut the hatch, wrap the edges in tape to protect them, and add a couple of rods to hook the hatch to the fuselage in the front. 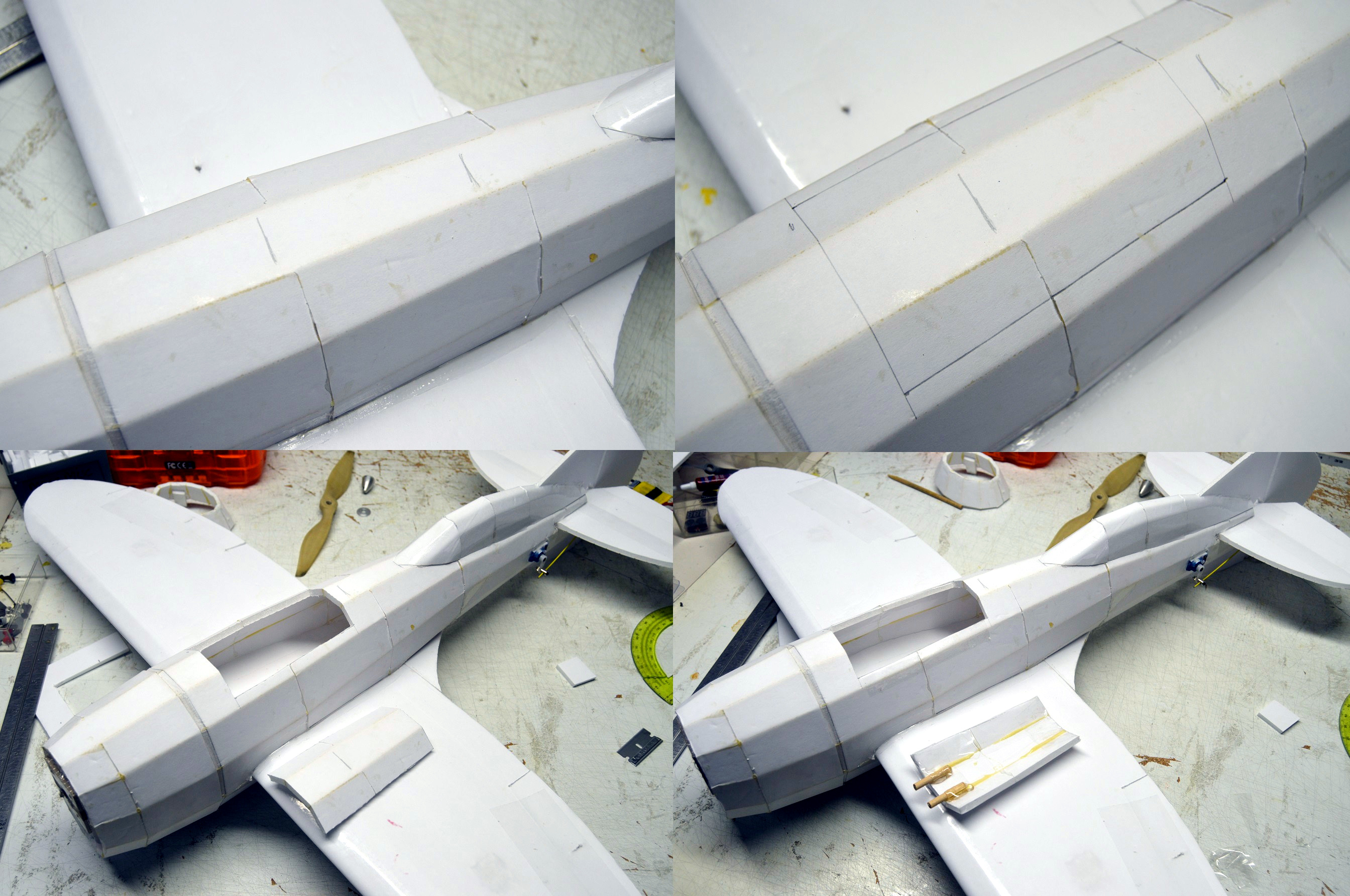 Finished the bits and pieces needed to make her ready for her maiden. Not sure when I will get to the field for this so there is a chance I will have time to tidy her up and give her a paint job before maiden. 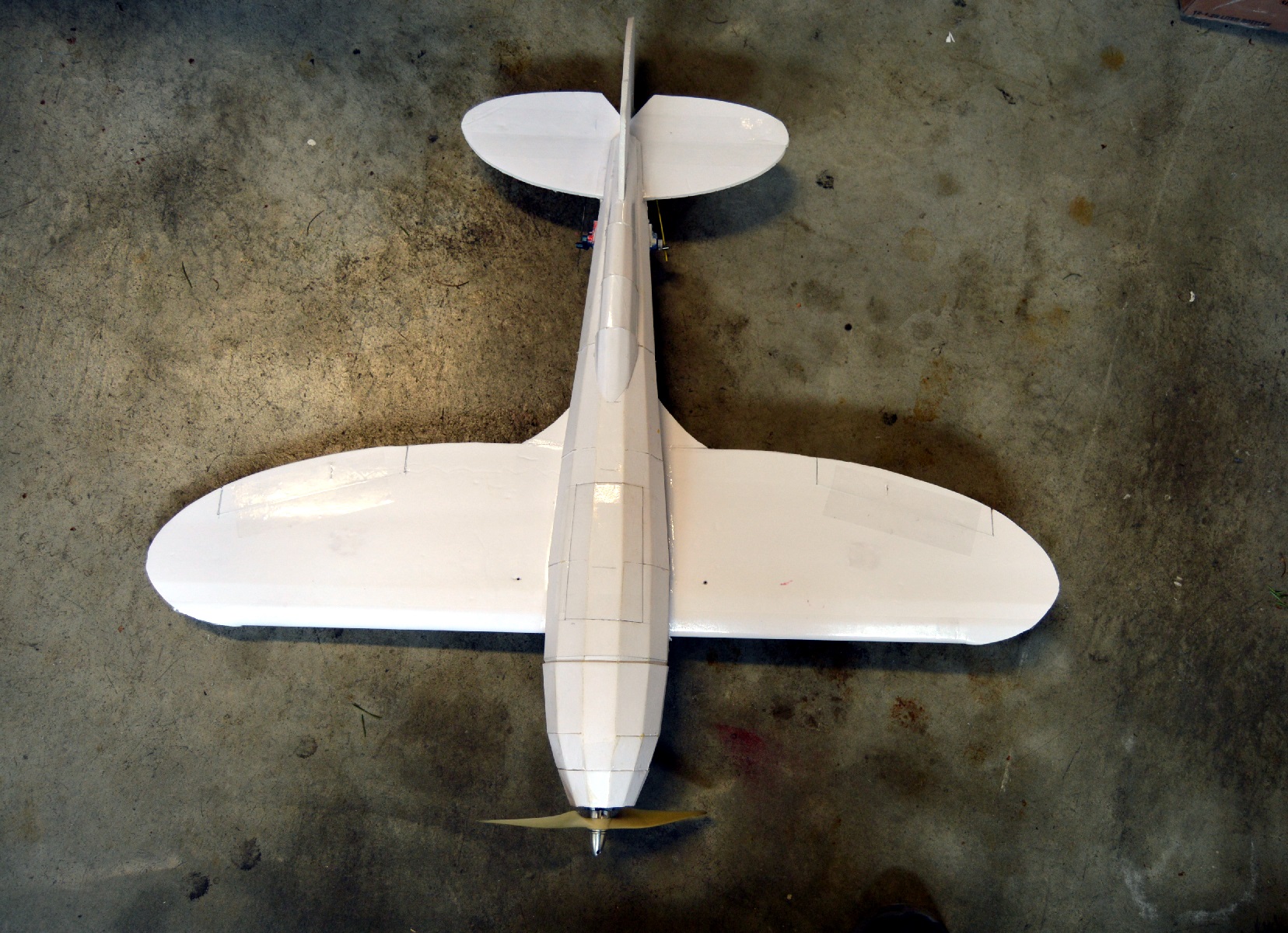 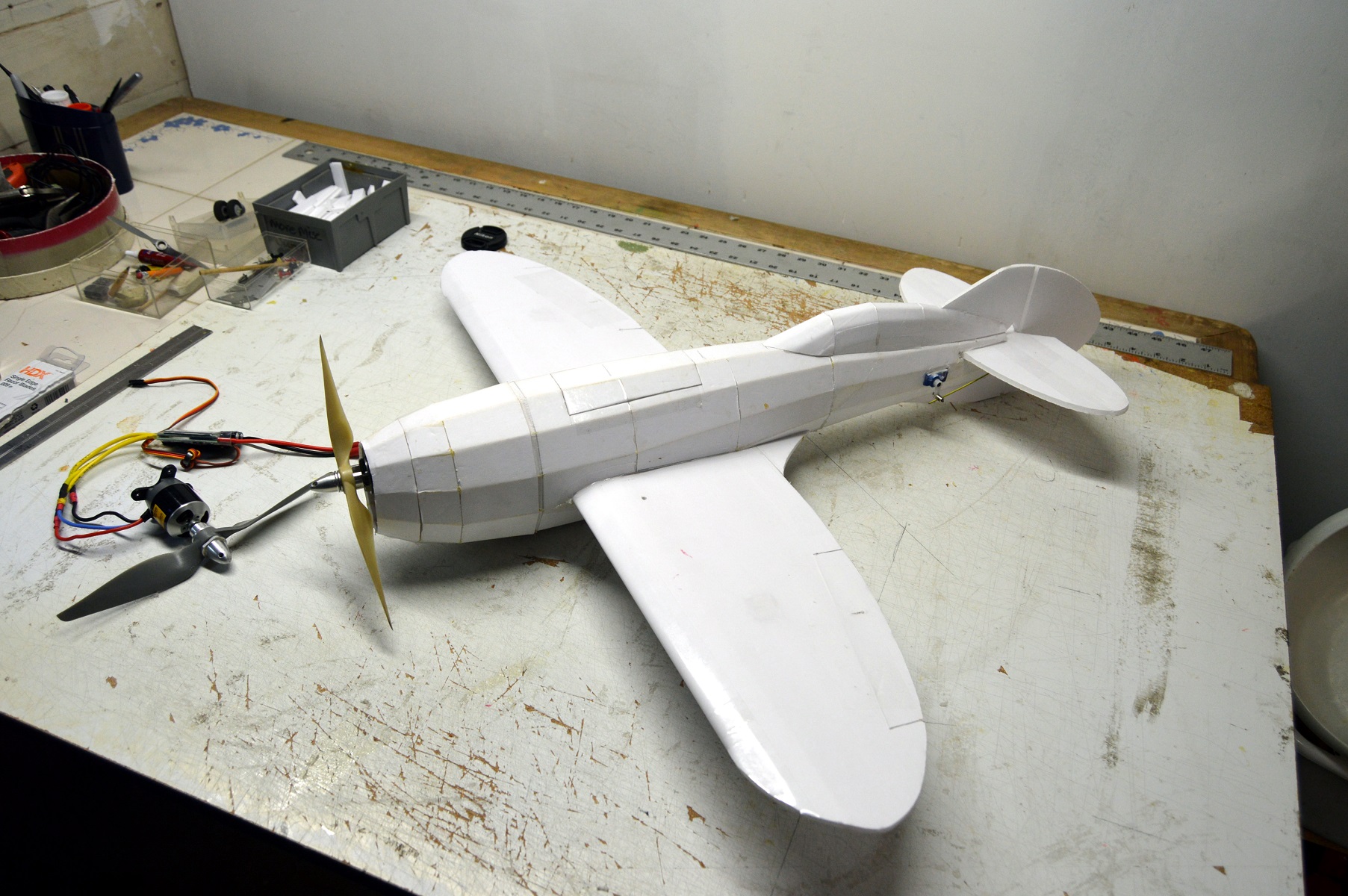 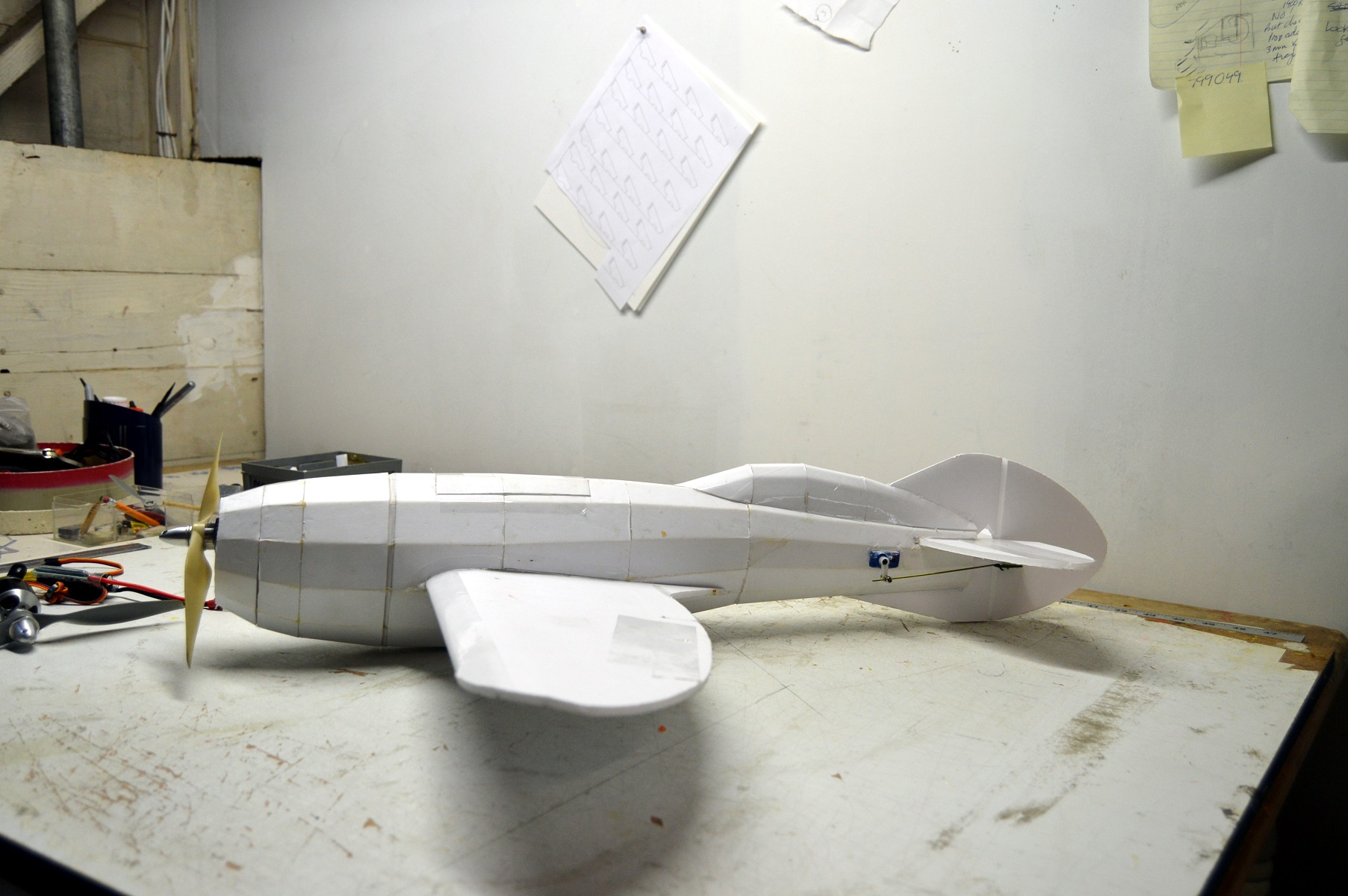