#1
Hi guys! I am Fran from Argentina and i have just started building a homemade Discus Launch Glider. I am creating this thread to show you the building process. I will be very thankful if you help me through the build, i would love to hear from you any piece of advice.

I have always wanted to fly one of those DLG's, but here in Argentina it is very difficult to get one as they are very expensive. I really wanted to buy the "Vick DLG" but I could not get one because of taxes to import in my country. That was when i decided to build my own glider. I was truly inspired by the vick dlg, but i made some mods to the design. The biggest change is that instead of having a 750 mm wingspan, my wings are going to be 1200 mm long. It is going to be a 2 channel glider having only rudder and elevator. I have made a rough 3D model so thay you can see how i want it to be:

First of all, i have drawn the main pieces in Corel Draw to laser cut them and took them to a shop to cut them in 3mm balsa wood. I was really amazed of how cheap it was. I have paid only 100 $ARS (roughly 3 USD). This is how they came out: 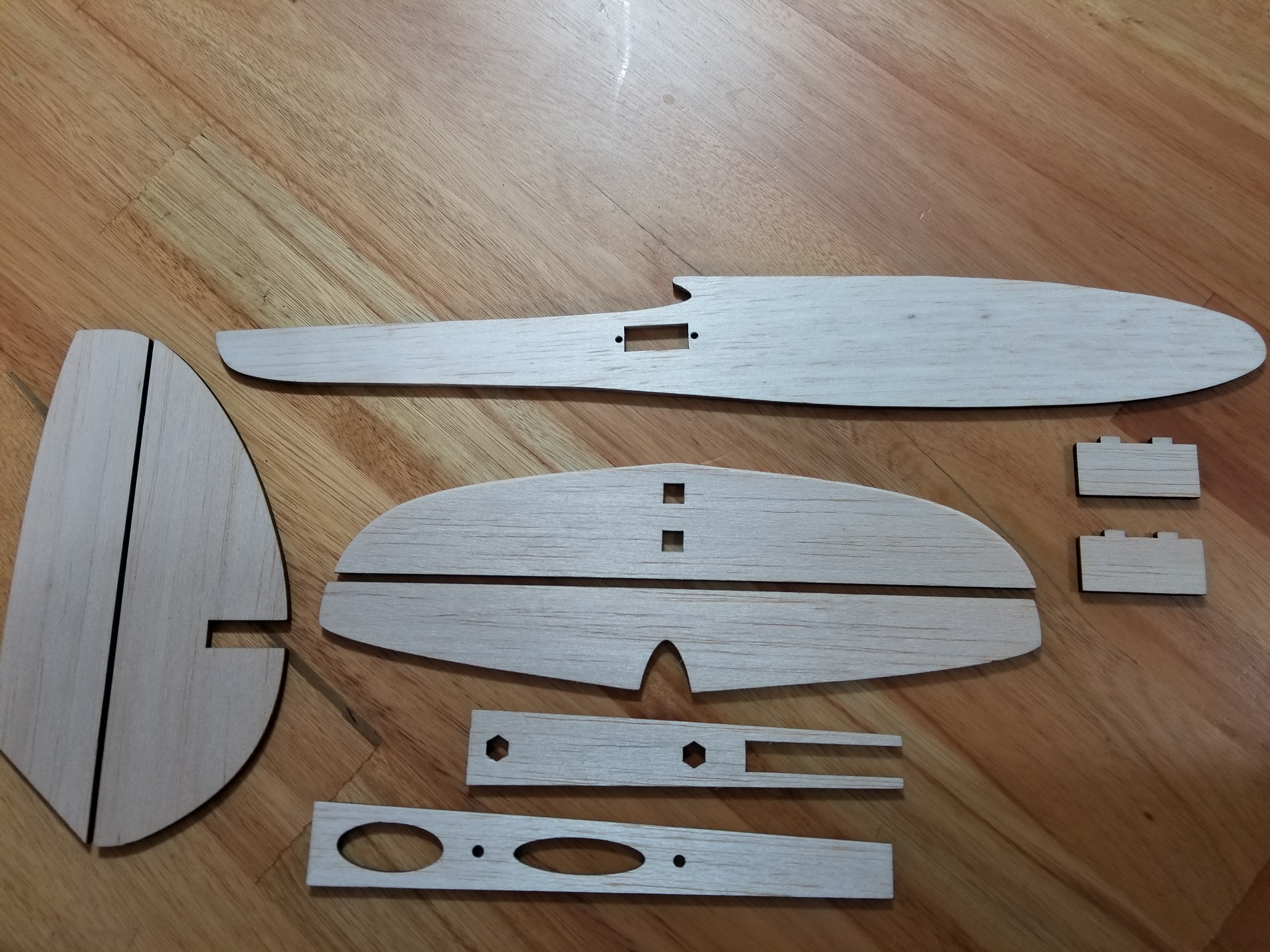 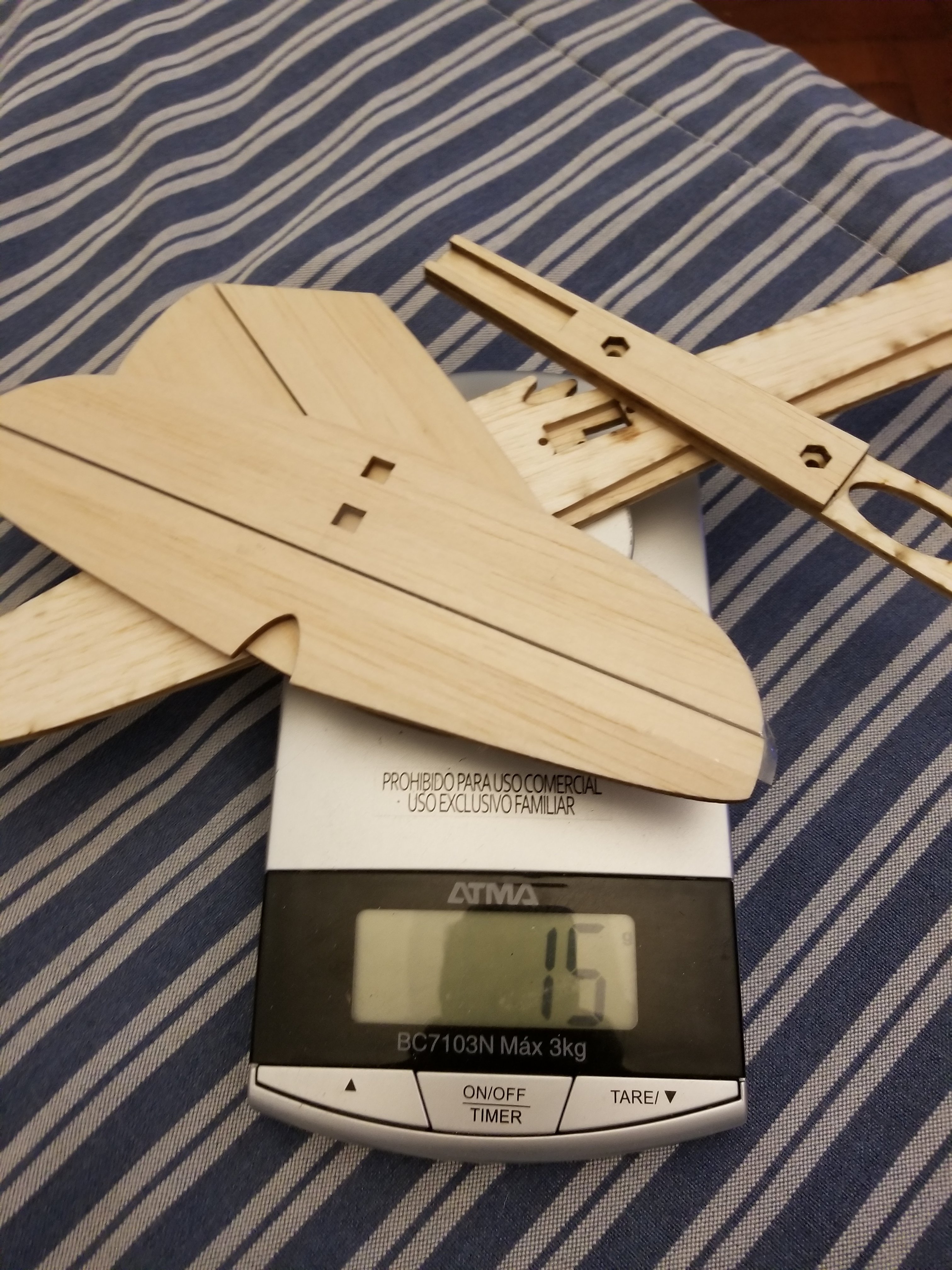 As you can see, they only weigh 15 grams. I think it is good enough.

Today i have cut the wings out of high density foam using a hot wire. The procces is not very difficult, but you have to be prepared to fail 😂. The airfoil templates where also laser cut. 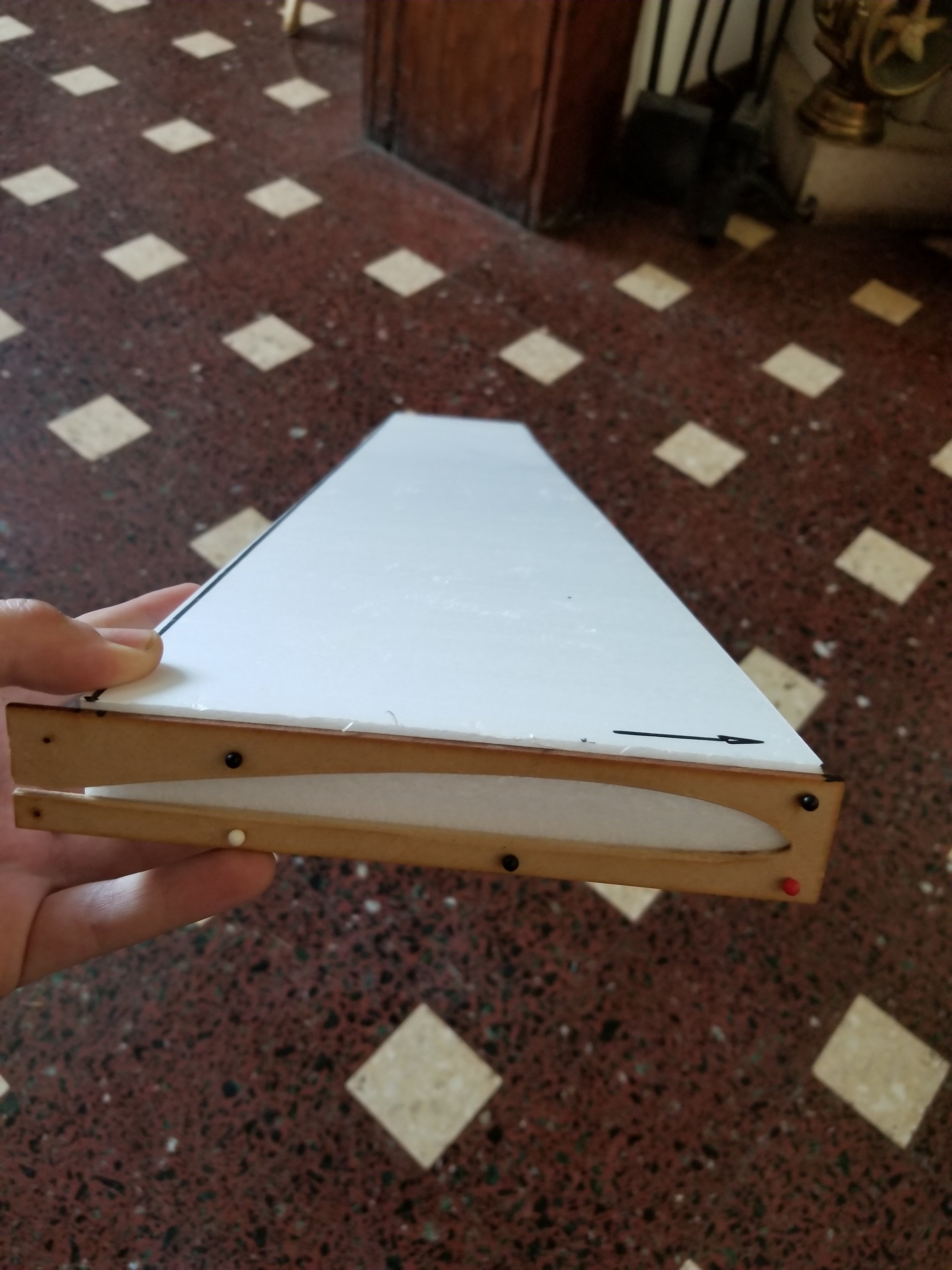 Here is a picture of the first attempt. It turned out to be pretty badly, but after sanding for a while i could save the wing. Pay attention to those ulgy deep grooves in the foam. Thankfully i could remove them very easily. 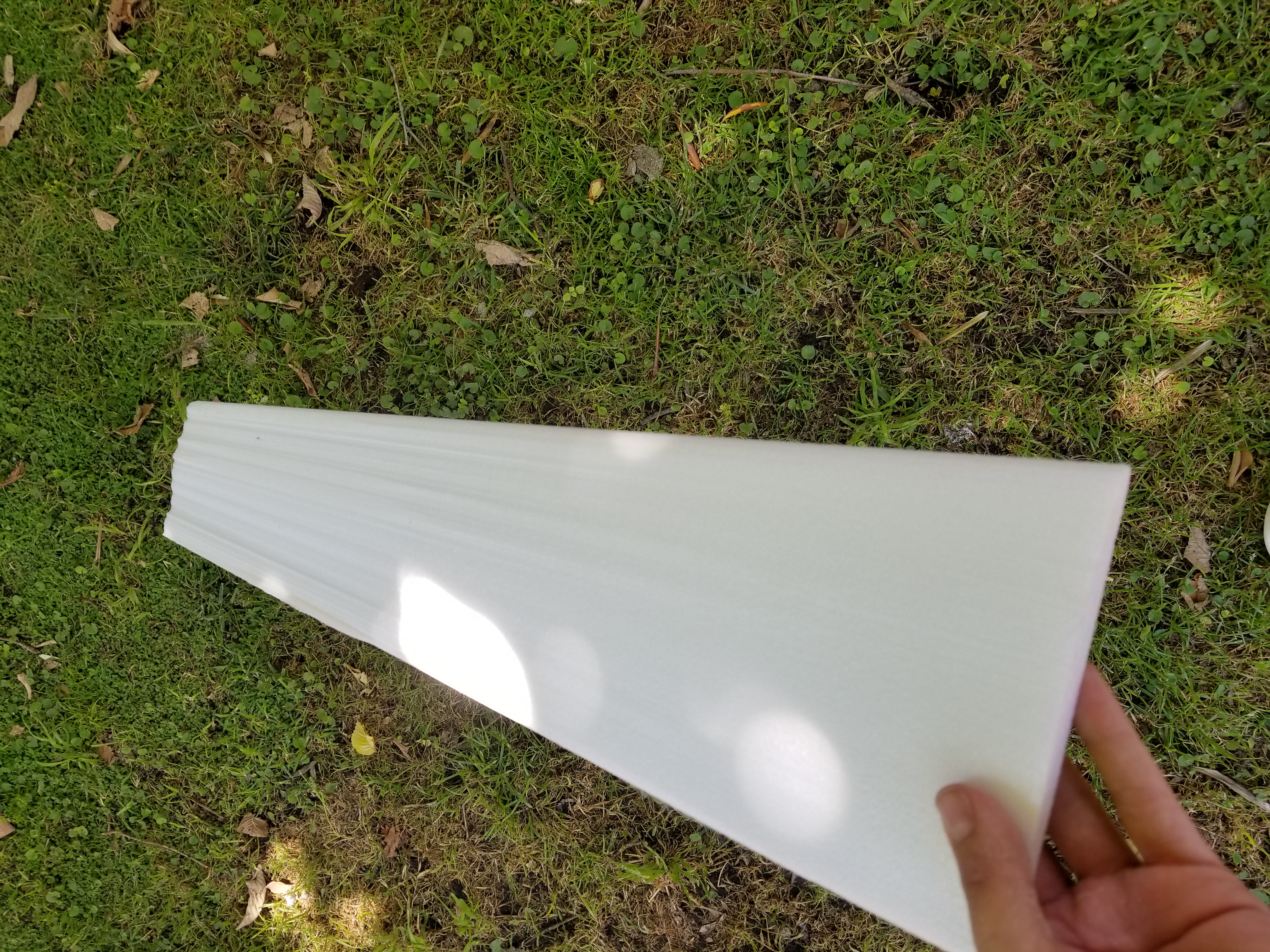 Here you can see the 2 finished wing halves: 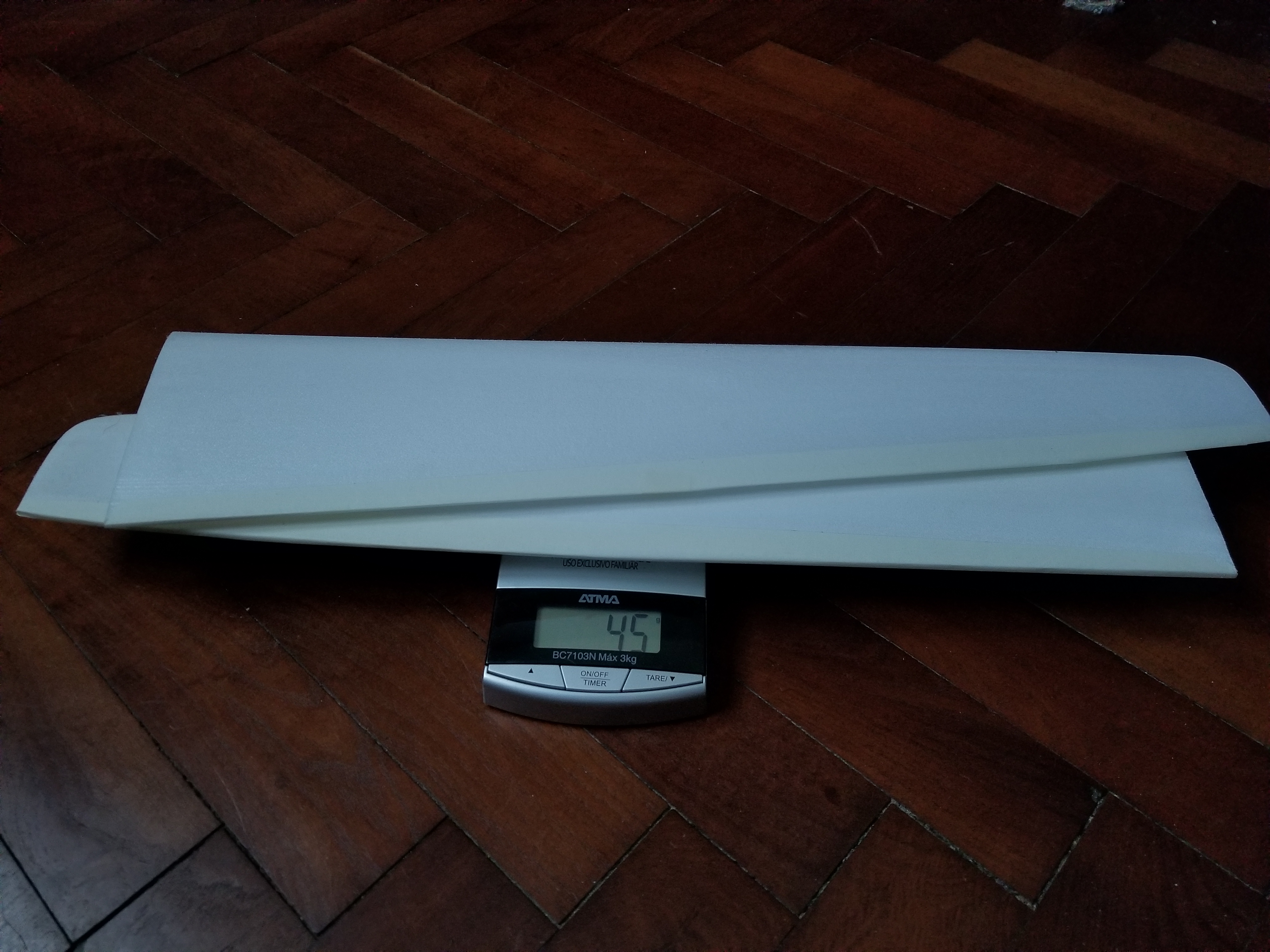 The trailing edges are very thin and brittle, and they look as they are going to get dented very easily. For now i have covered them with tape (as you can see in the previos pic.) to prevent any damage. I have ordered some carbon fiber rods and stripes to use as wing reinforcement. After that i don't know what to do: Should i fiberglass the wings to make them stronger and more durable? Or should i save weight covering them with tape?

Now that i am stuck waiting for the pieces to arrive, i started figuring out the electronics to use. I have a simple Turnigy 5x transmitter and it's receiver. I also have a power pack i used for a big 2m glider i have, but it was really heavy to use for the DLG. Everyone in the internet uses 1s lipos, as they are really small and lightweight. As i could not find any in Argentina at a reasonable price, i came up with this thing: 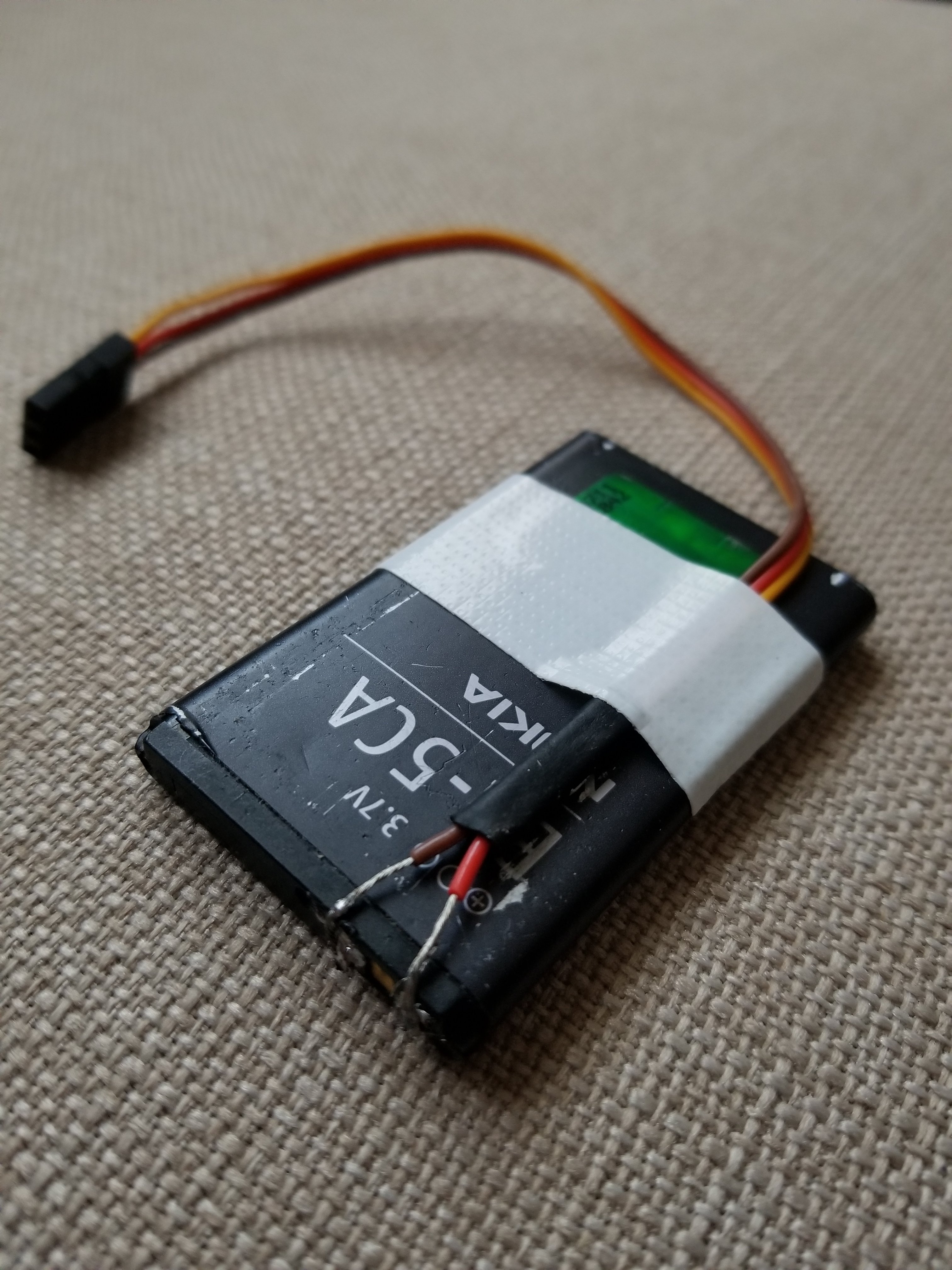 It is very simple. I used an old nokia battery i had laying around at home. I soddered very carefully on it's pins a jst connector i took from a broken servo. It is ideal to power up 2 servos and the receiver, and only weights 21 grams.

Please let me know what you think. Now, i have to build the pod (i have ordered and i am waiting for the servos to arrive). I am going to post more details as soon as i can. Thanks for reading, cheers from Argentina.

#2
Hi from New Zealand. It looks like your wings and laser cut parts are shaping up well. I started out wanting to build a DLG too, but my parts are way overweight (closer to 800grams) so its more of a glider! Last week I made a wire cutter for another project at work, but am yet to give it a whirl - you say its easy?
F

#3
bracesport said:
Hi from New Zealand. It looks like your wings and laser cut parts are shaping up well. I started out wanting to build a DLG too, but my parts are way overweight (closer to 800grams) so its more of a glider! Last week I made a wire cutter for another project at work, but am yet to give it a whirl - you say its easy?
Click to expand...
Just go for it!

#5
bracesport said:
How’s progress on the build?
Click to expand...
Hi! It is already finished and flies pretty well! I have pictures of the building procces and i am going to upload them as soon as i can. I have made several mods to the original design. I also have some flight videos. Just stay tuned, i am going to upload as much as i can For now, here is a picture of the finished DLG without the canopy lid. 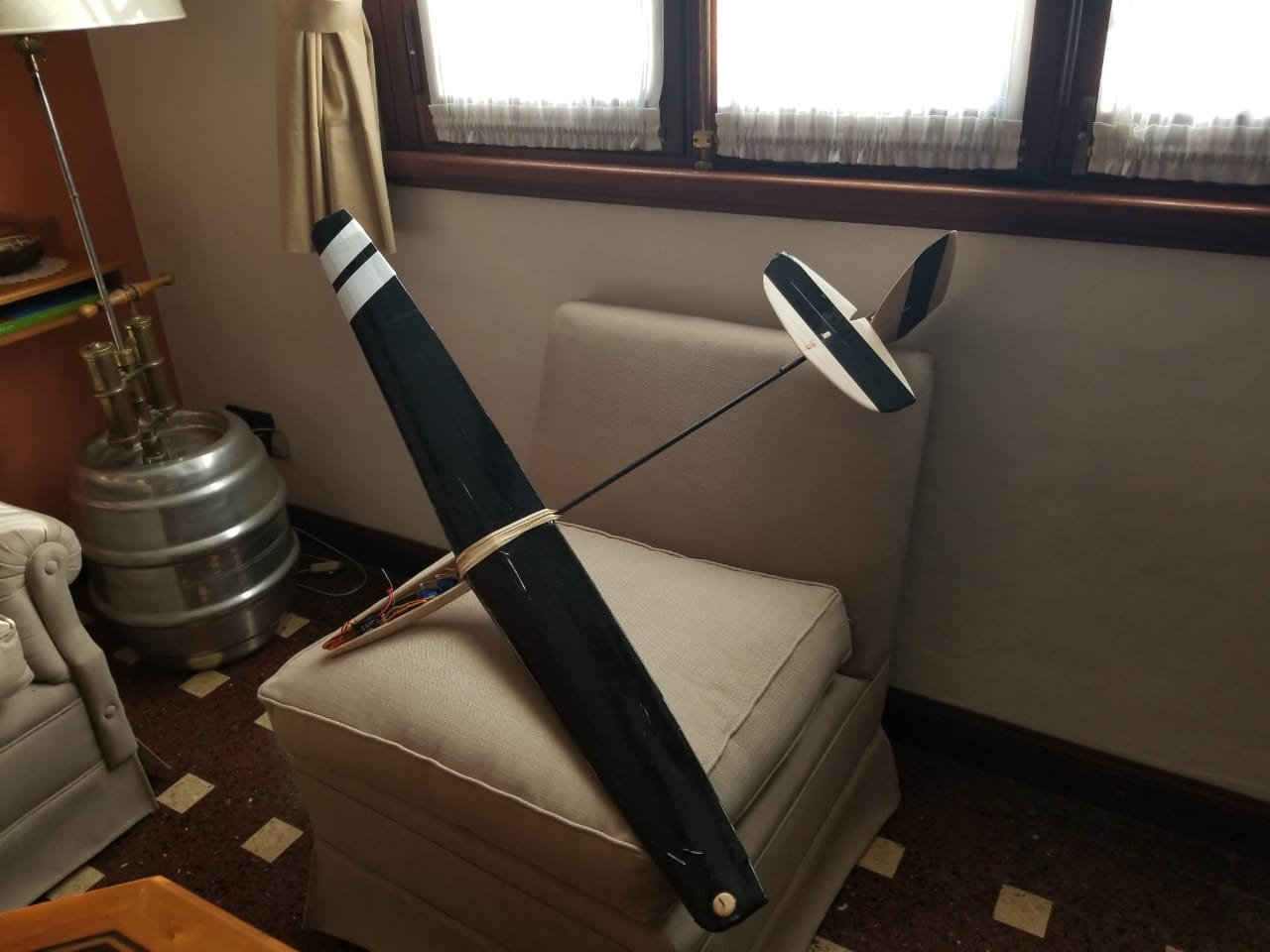 #6
Nice! looks like you know what you're doing!
F

#7
bracesport said:
Nice! looks like you know what you're doing!
Click to expand...
It just looks like, I actually do not jajajajaj. I can improove many things in the build and design and i have went through MANY iterations of the pglider this month. For example, the tail feathers were at first extremely small and i did not have enough control authority. Iwill post more details as soon as i can. Cheers from Argentina.
M

#9
Merv said:
Great looking plane. A flight video & plans please.
Click to expand...
Hi! Here you can see a low quality (sorry) video of a launch!
I don´t have any plans, but the wings are hot wire cut out of foam and reinforced with carbon fiber rods and a strip in the upper side. The arfoil is MH32 and the wingspan is 1,2 m. The tail boom is a 750 mm CF tube. Please ask me if you need any specific measurement i would be pleased to measure it for you.

Now i am considering making a video showing it off, it might be asier than explaining through the forum! Cheers

Mentor
#10
What a great build! I wish I had access to $3 USD custom laser cut balsa like that