#1
This is a progress log of my project to recycle and old Rc plane and turn it into a sort of fantasy STOL airplane.

Inspired by the huge amounts of nice bush planes available on the market lately I wanted one of my own. I wanted mine to be different and also thrifty!

it's a very dated hobbyking 1500mm cessna 182. All the electronics were included but the motor was dead, magnets broken, bell deformed and wooden firewall destroyed (it's friction fit put back together in the photo)


So here is the dream;

An inexpensive and different Stol airplane

use the beefed up landing gear coupled with some larger wheels for that bushplane take off and landing ability, i'll be flying in rough terrain

Flaps! I've never had flaps on a plane before so I'll put these old futaba servos to use and put it on the slider of the taranis for manual smooth flap operation!

Vortex generators, because why not? I plan to have them just at the aileron span

Canard wing! I want this to be a bit unique and the nose need to be rebuilt anyways so I may as well do something interesting here. This is like the WREN or Katmai mods but I may decide to go a little bigger for just a bit more of a unique look. it will have a control surface coupled with elevator... should be interesting!

More power! the stock airplane has a 3530 old motor so i am throwing in a modern 3536 on 4s for just a bit more power

FPV and LRS (ish) ; I have a lot of gear and my goal is to make just a few airplanes this year but make them unique and load them up with whatever tech I have lying around, here's what I've got planned...

Definetly a new paint job and finishing... I am thinking flat black and a bright color to accent it.

I've already begun cleaning it up, I've reglued the wing spar, taken off all broken parts and ordered a replacement motor.

The motor will likely take a few weeks to come so I'll begin work ont installing all servos on the wing shortly. Stay tuned


A last detail, This project is meant to inspire others to re use old gear and sort of "recycle" your RCs. I am not going for a very scale Restoration, I am building my dream Stol airplane that is unlike others and unique to my tastes and uses a lot of parts I already have. I'll keep my budjet low and document the procedure to give ideas to others. Hope this will serve the community.

#3
Finished the servo assembly on the wing and tested it with a servo tester. Everything seems pretty good So i did a mock fit and it looks ok.

I put the flap servos facing the same direction so I can use a y connector and keep it simple.


Will begin the Canard and nose assembly this weekend.

so far so good

The lipo is to balance it temporarily

#5
Since the motor came in early I worked on reinstallng the motor mount but decided to make my own instead. It's foamboard with a thick wood firewall and I used generous gorilla glue to mount to the damaged front end, Reinforcements are forthcoming with the Canard wing installation which is next. I used a washer for right thrust and since I used the original motor mount as a pattern it had downthrust built in.

It does look kind of excessive to me tho. May add a washer to the bottom to straighten it out... what do you guys think? too much down thrust?


I finished the canard, it has a hint of down angle but jut barely. I'll try it as is for now and think about adding servo control after I fly it

So it's ugly right now... but I could attach the wings set up the radio and give it a fly to check it out. The weather isn't great so I may do more work on it before that.

Need to close the nose up but I'll wait until I decide if I want to add servos and modify thrust angle.

As for the paint job thing, that'll be one of the last steps. Should be picking up some bush wheels and preparing for a test flight and that'll help determine the next steps

#7
T-Richard said:
View attachment 103481
Click to expand...
That's either a picture of a real Cessna, or the most scale r/c I've ever seen. If the latter, where did the constant speed prop come from?
S

#8
It's a Katmai conversion of a 182, which is a refined version of the old Wren job. They're real, and they're very impressive.

I have one of these, but it came new with some qc issues... so I'm probably gonna go through it, do a taildragger conversion, bush it up.

#9
spacer said:
It's a Katmai conversion of a 182, which is a refined version of the old Wren job. They're real, and they're very impressive.

I have one of these, but it came new with some qc issues... so I'm probably gonna go through it, do a taildragger conversion, bush it up.
Click to expand...
I remember the Wrens. Never flew one, but read about them.

You're going to spend a couple of bucks, then. That would be quite a plane when you got through, should have Trent Palmer style STOL capabilities. Hope you keep us up to date when you get into it. 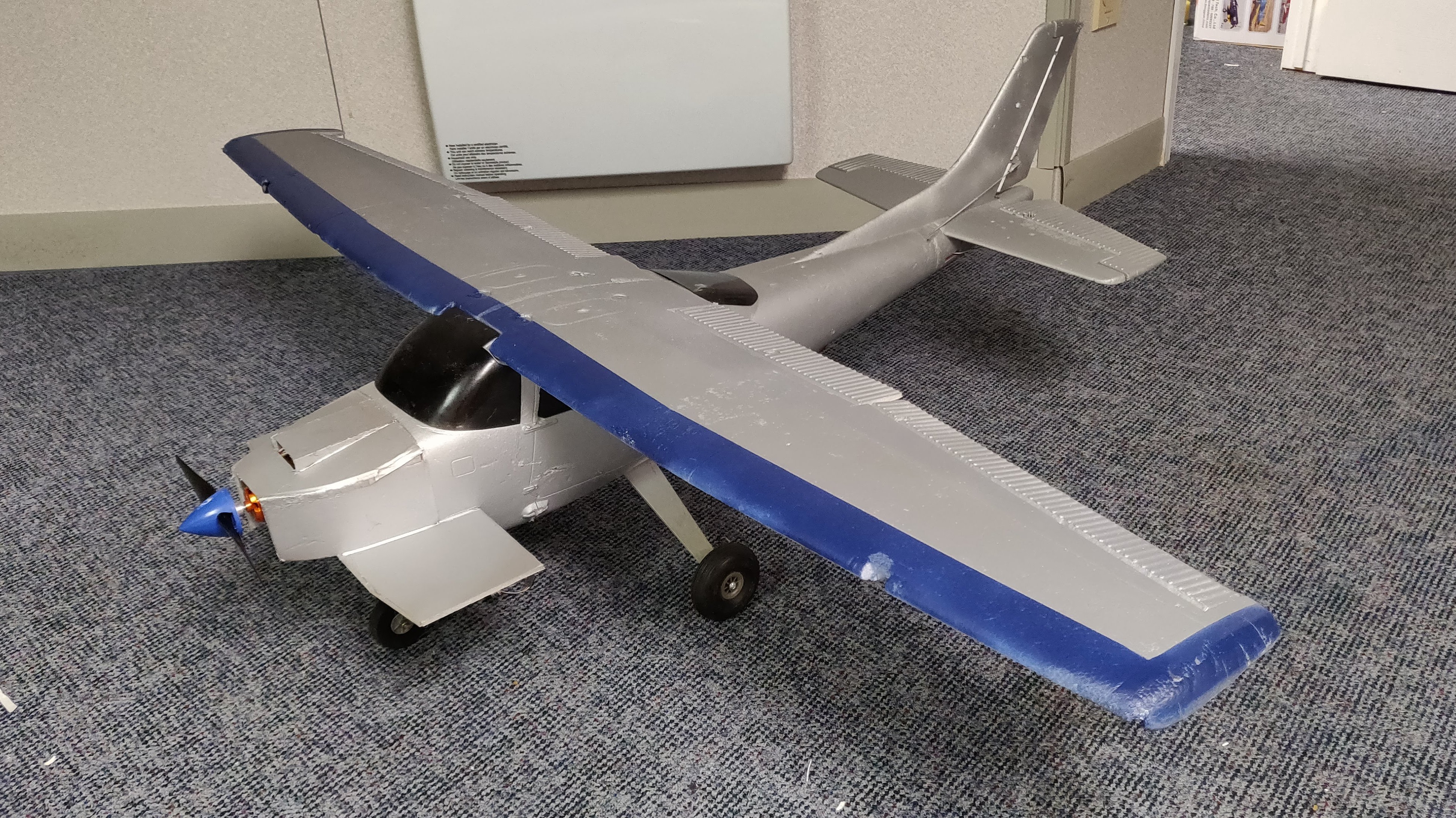 So I took a long Hiatus from this project because of drones and stuff. Got back to it, Painted the whole thing wing an fuselage. Made a lipo mount, put some bush wheels and they spin nicely!

Have to figure out the wing bolts, haven't figured out the size and need to fashion some wing struts out of piano wire. This plane is big! (for me)

Hoping to mount the wings and maiden soon!

Basically wing tie down mechanism failed in the first attempt leading to stall and crash. I had tried dry Wall Mounts screws and piano wire strut. The front ripped out in flight and cause variable angle of attack....

Fixed it and added some nose weight. Tried again. The flying was much improved but still had stall and a crash. Probably still a little tail heavy. Only real damage was the landing gear.


So new plan is to make it a taildragger. Stay tuned for that.