Simple Scout - my next build (with UK foam board)

#1
I got the FT plans printed before the print shop closed for corona virus, and I'm going to start making templates this week.

I have 4 sheets of westfoam board left. I know I should extend the nose by 30mm to help with balance. But does the wing have enough lift for this board?

The only other plane I've built with this FB was a MUTTS, which is a TT with a larger wing.

#2
What's the best way to extend the nose without messing up the plans?

Should I cut the front, then move it 30mm left, and reprofile the angles when making the template?

(sorry for the dodgy sketch)

#3
messyhead said:
What's the best way to extend the nose without messing up the plans?

Should I cut the front, then move it 30mm left, and reprofile the angles when making the template?

(sorry for the dodgy sketch)

View attachment 164161
Click to expand...
Here in Aus I use a local FB that is far heavier than the types than used by FT. To achieve an easy to balance model using the original plans I normally remove the paper off of the inside of fuselage tail boom prior to assembly, bring the servos forward, extend the power pod motor mount end forward, fit a larger motor,fit heavier wheels, move the undercarriage forward, use a heavy plywood firewall, cut large ventilation holes on the underside of the tail boom, and/or use a heavy spinner/prop adaptor.

The model will fly even if heavy though it may require slightly higher speed to do so. It may also require a review of the wing/tail incidence angles.

Some models require more effort to balance and some require very little effort at all. As a rule of thumb, the longer the nose the easier it will be to achieve proper balance.

Just what works for me!

#4
I made a start on the fuselage today. I can't do more until my order of poster board arrives to make the remaining templates. I also need to wait on wire for the push rods to finish off the fuselage.

I tried to strip most of the paper from the inside of the FB to help with weight. I used a warm iron, and it worked OK, but I could only strip the shiny outer paper surface from most of it. It left a thin fuzzy layer behind, but that's probably better for the glue anyway. 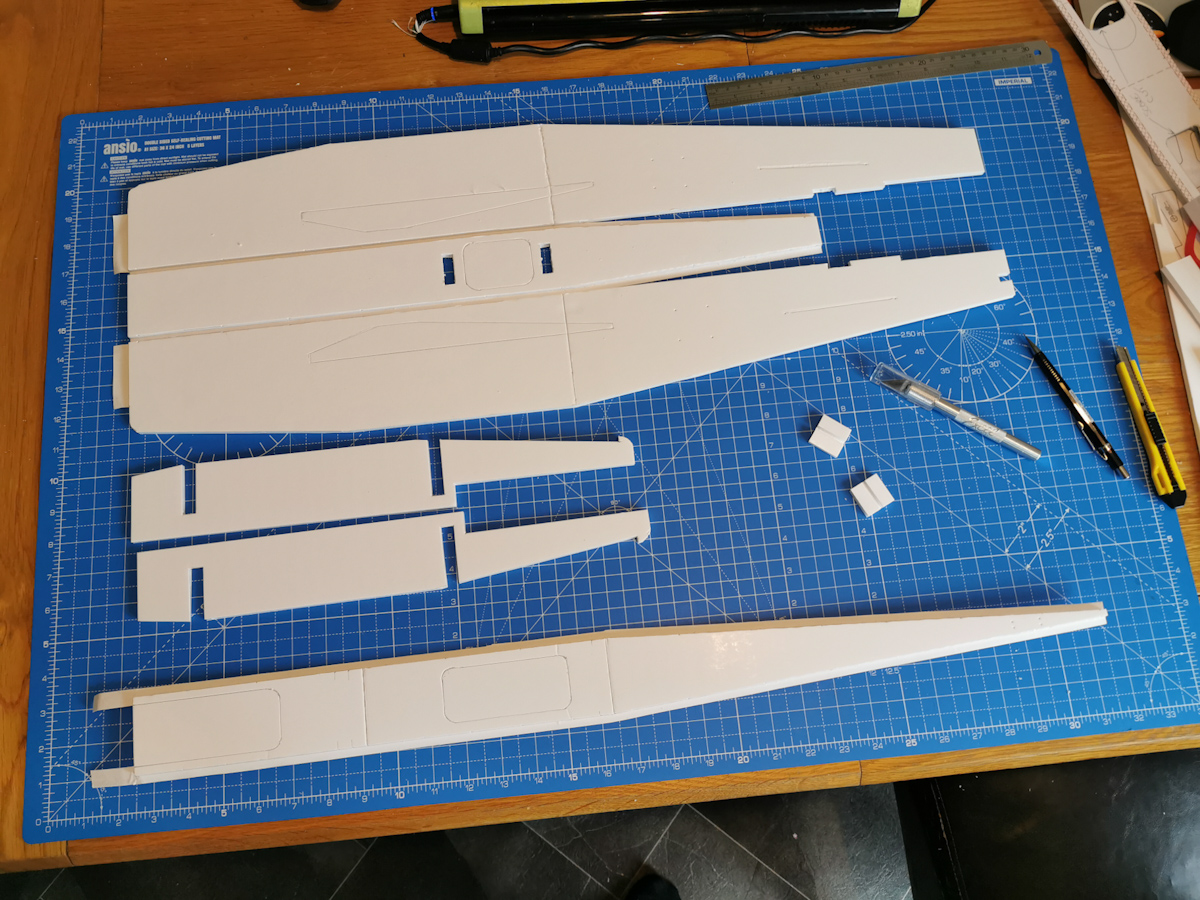 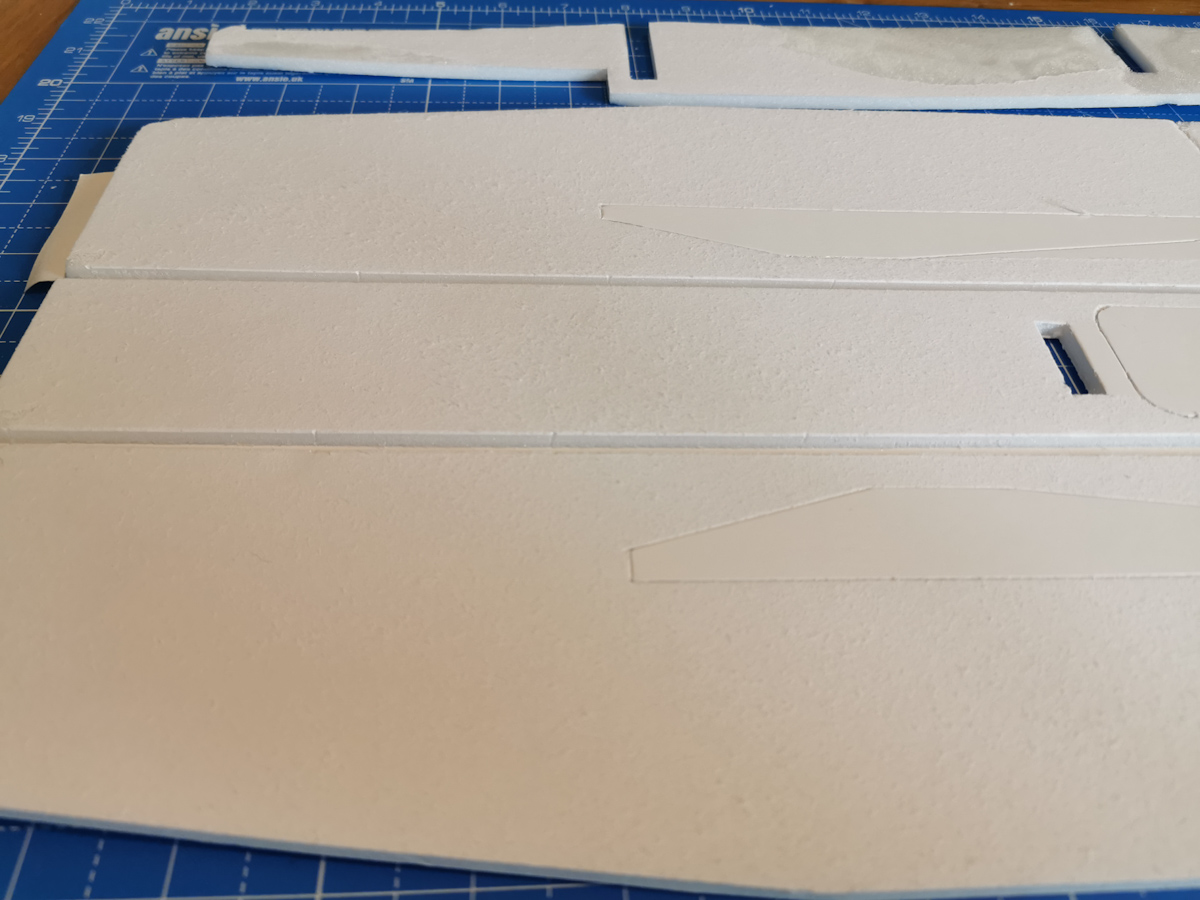 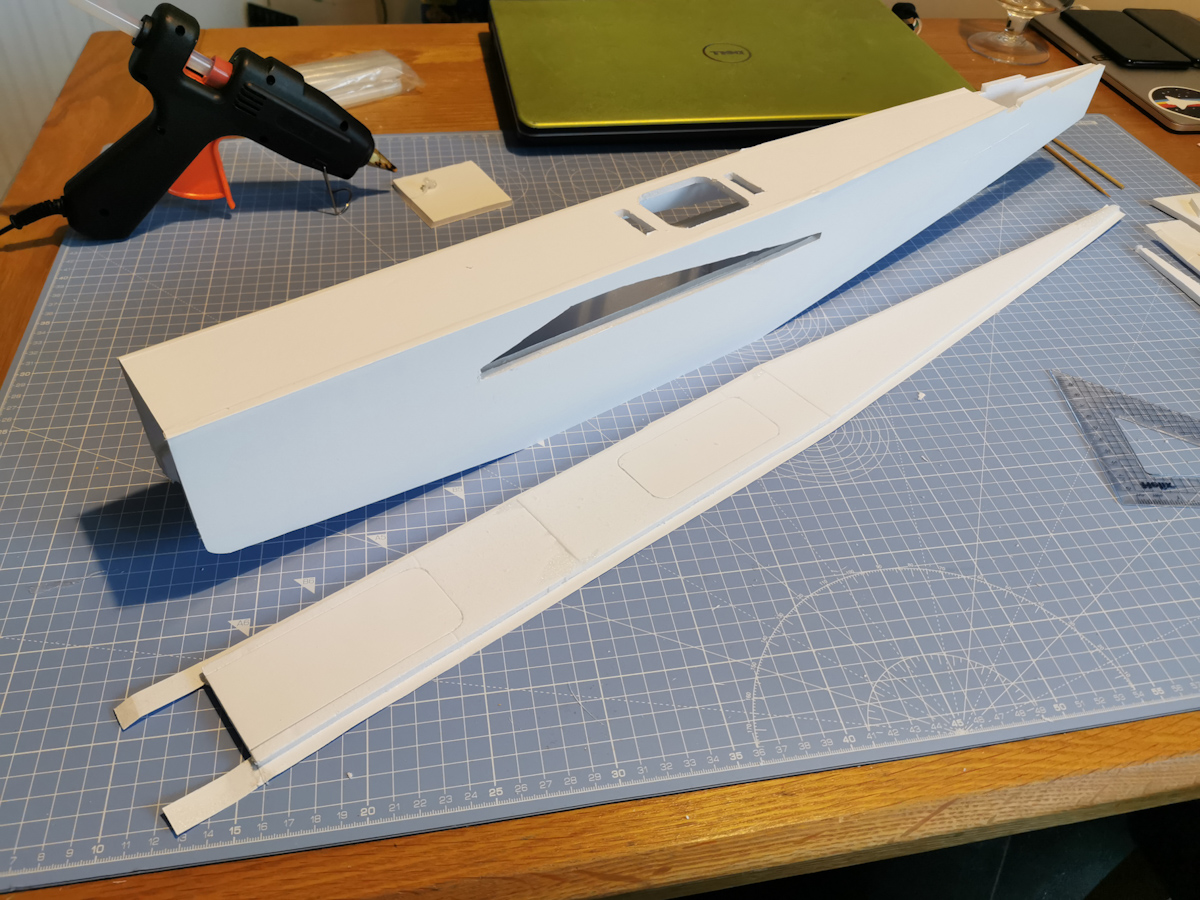 #5
I'm carrying on with finishing the fuselage.

I have some ply, and a bunch of old credit cards, so I can make them. But I'm just wondering whether the smaller TT ones will do?

#6
messyhead said:
I'm carrying on with finishing the fuselage.

I have some ply, and a bunch of old credit cards, so I can make them. But I'm just wondering whether the smaller TT ones will do?
Click to expand...
Almost any control horn made from almost any material will suffice. Just 2 things should be obtained and they are;
1. The control surfaces must be able to reach the required deflections.
2. The control horns should have sufficient footprint so that they do not rip out in flight or over time.

I use almost anything I have to hand or even reuse the control horns salvaged from older models.

Mentor
#7
messyhead said:
I'm carrying on with finishing the fuselage.

I have some ply, and a bunch of old credit cards, so I can make them. But I'm just wondering whether the smaller TT ones will do?
Click to expand...
I’ve used the small control horns on larger planes and vice versa. The only thing you have to be careful about is that you want the hole on the control horn above the hinge line, so having the smaller arms makes it harder if you have the bevel cut on the control surface side.

#8
The thing that Hai Lee said about the footprint made me think the TT ones would be too small. So I made some from an old credit card.

#9
I want to do a decent job of building this. I consider my two previous TT builds as practice

I've tested fit one of the control rods, that I made from 1.5mm piano wire. When I've run it through the fuselage, there feels like resistance to it moving. Is this expected, or could I have done something wrong?

I've got some 1.2mm wire on order, so maybe I should wait and use that?

#10
that is quite a big curve for 1.5mm wire - try to make a straight run and support it halfway with a small straw to pass through.

#11
I might try and make a support across the inside of the fuselage as a support instead of having it on the sides.
D

#13
daxian said:
dont do the crossover if using 1.5 ...i dont do it with 1.2 mm and the straight run is perfect !!
Click to expand...
I just noticed from the build video that they’re not crossed over. What's the purpose of the crossover anyway?

I think the issue with them moving, was to do with the tube I was using. It was big enough, but seemed to grip the rod a bit too much. So I changed to different tube, and also doubled up the blocks so it'll be straighter. They move easily now.

#14
it boils down to where you situate the servos in the different builds..i believe!

#15
I almost had it all done, but the wire is quite stiff to bend inside the fuselage, and it actually snapped off at the end on the final bend. So I'll wait till the 1.2mm wire arrives and see how it is. I think I might order some linkage stoppers as well.

#16
keep things simple and you will not regret it!

#17
I'm nearly done with the fuselage. But I need to get some wheels. I'm using bicycle wheel spokes for the wire, but I'm not sure what size wheels the Scout needs.

I've seen some lightweight foam wheels, but are they any good?

I'll probably be using a football field to take off from if I don't fly at a club field.

Although I'm probably going to fly it as hand launched to start with.

#18
Fuselage and wing done. I only had one sheet of FB left to do the wing, and it was a little creased, but I think it should be fine. I'll be covering the wing with coloured tape anyway. I also managed to strip the paper from the inside of the wing to save weight. 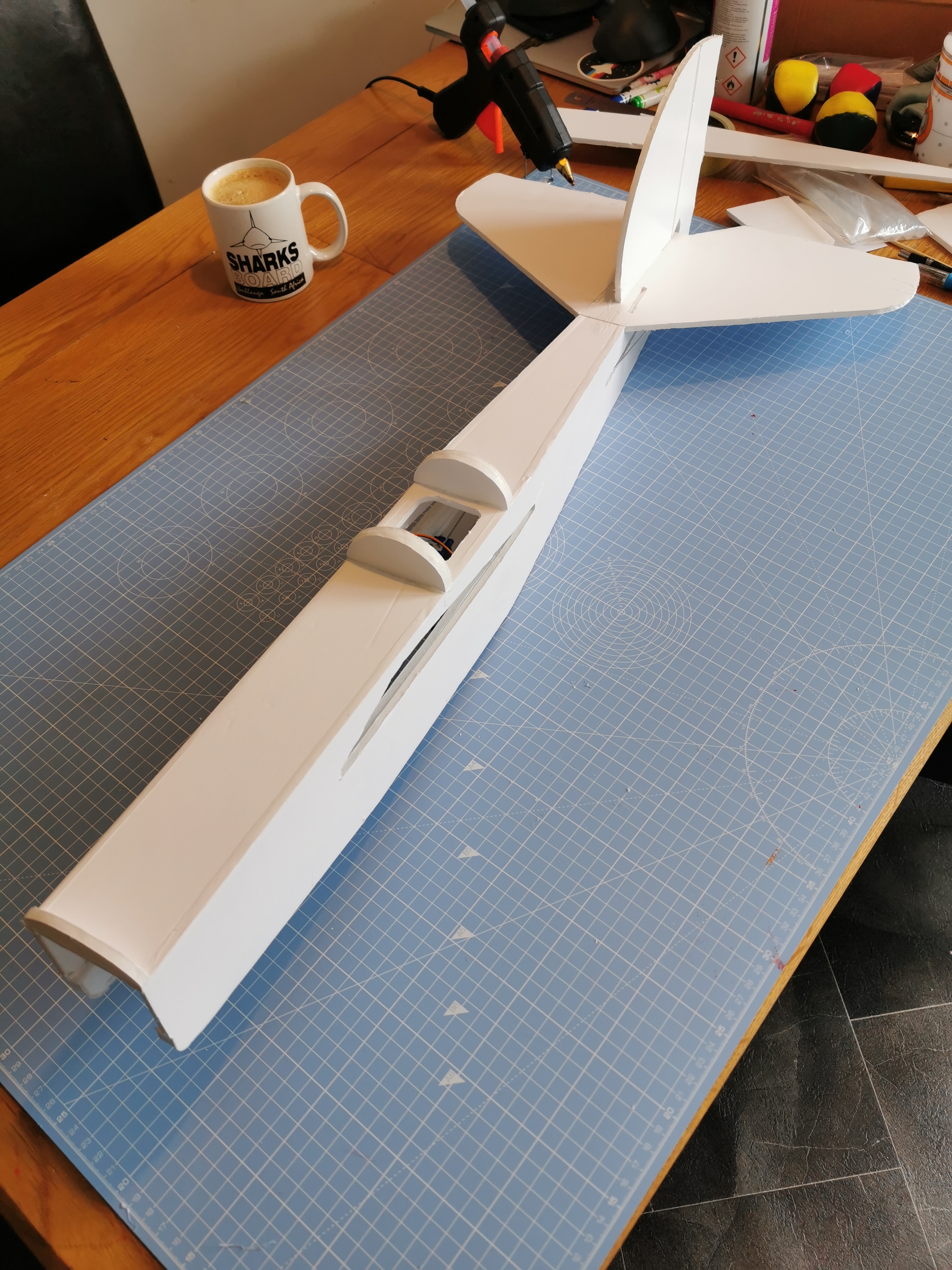 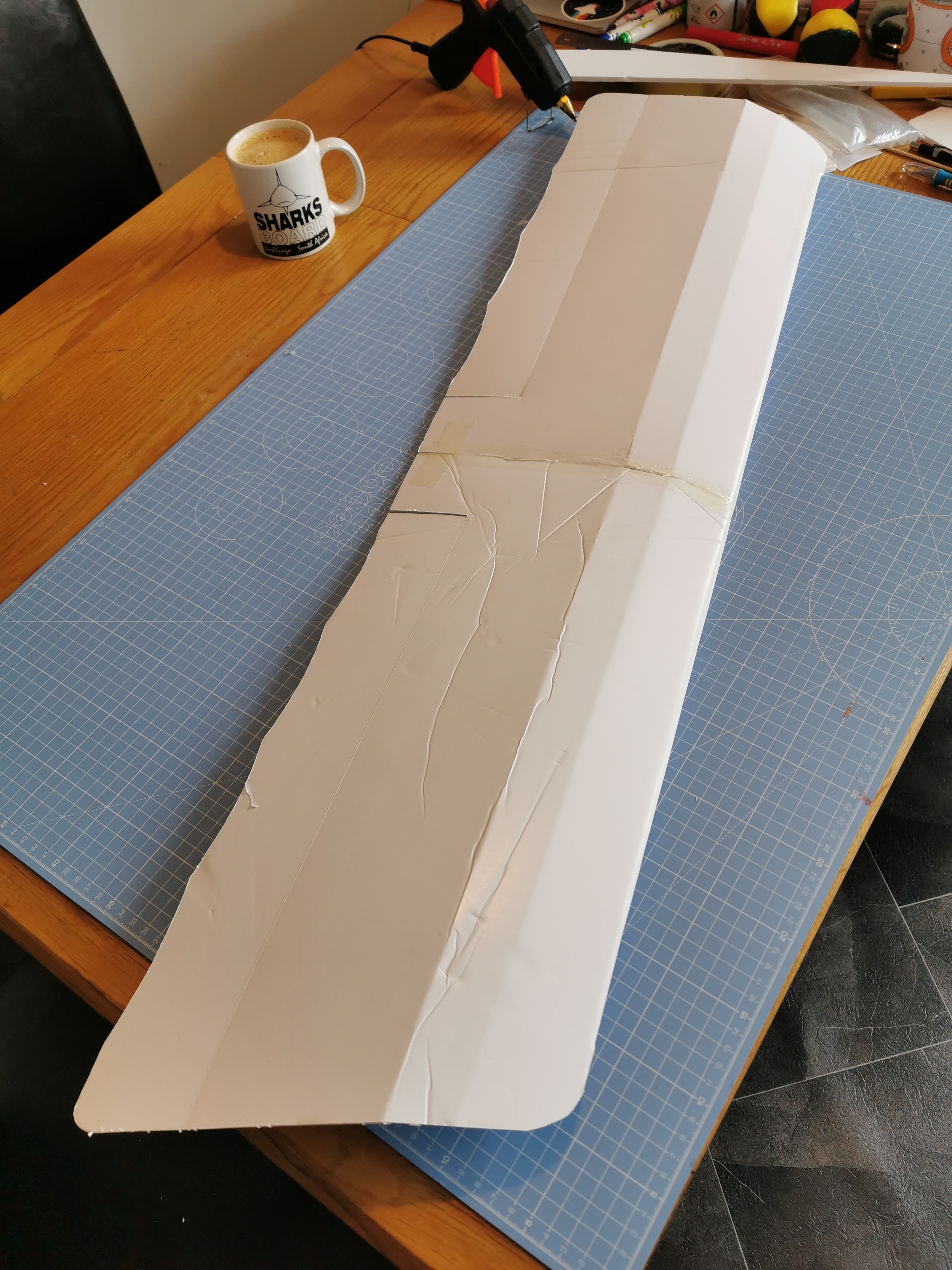 I might have a problem with the wing spar though. I held down the wing when glueing for a good while. But I think the wing curve might have been too much, and it's pulled away from the back edge of the spar. 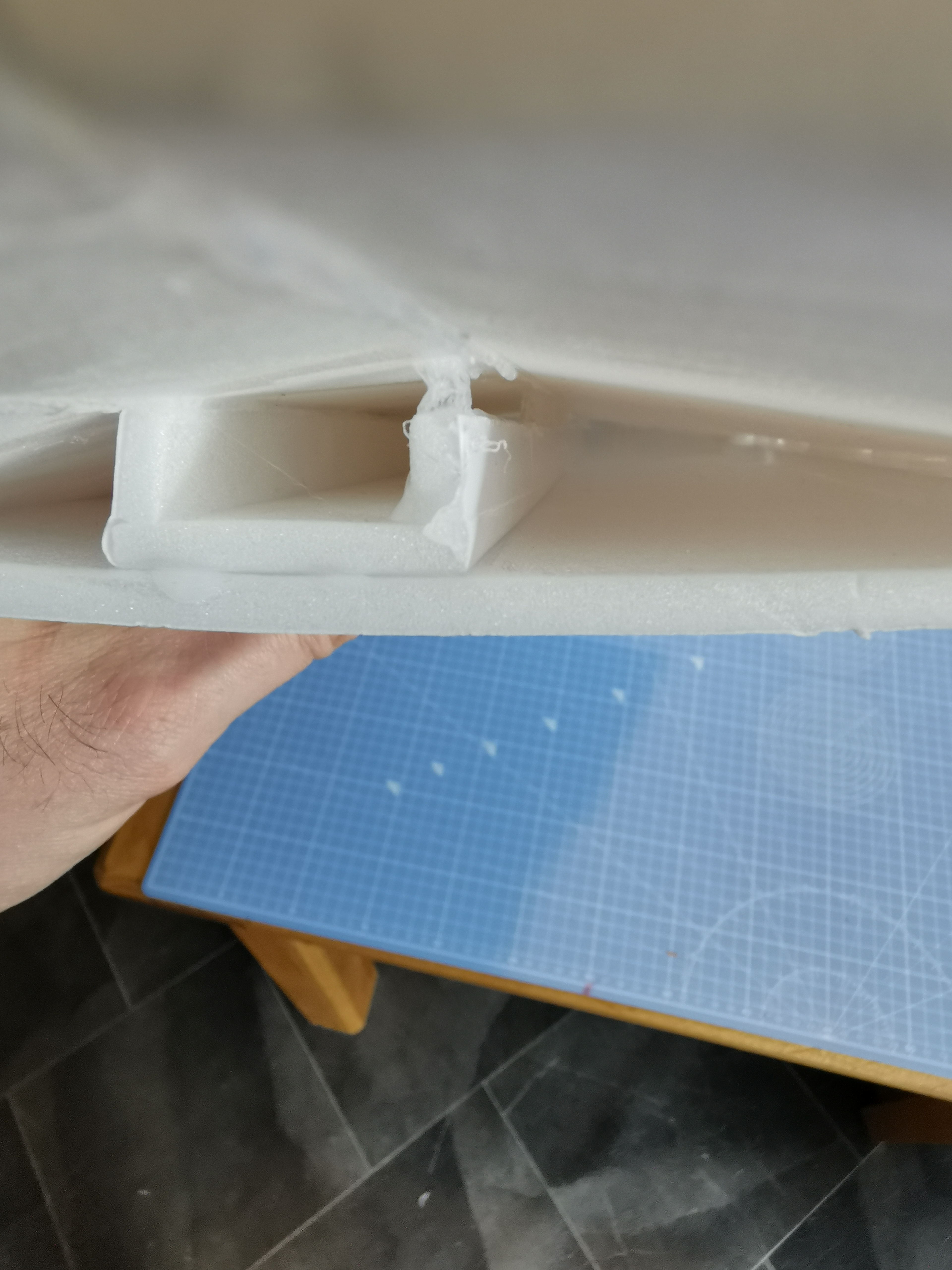 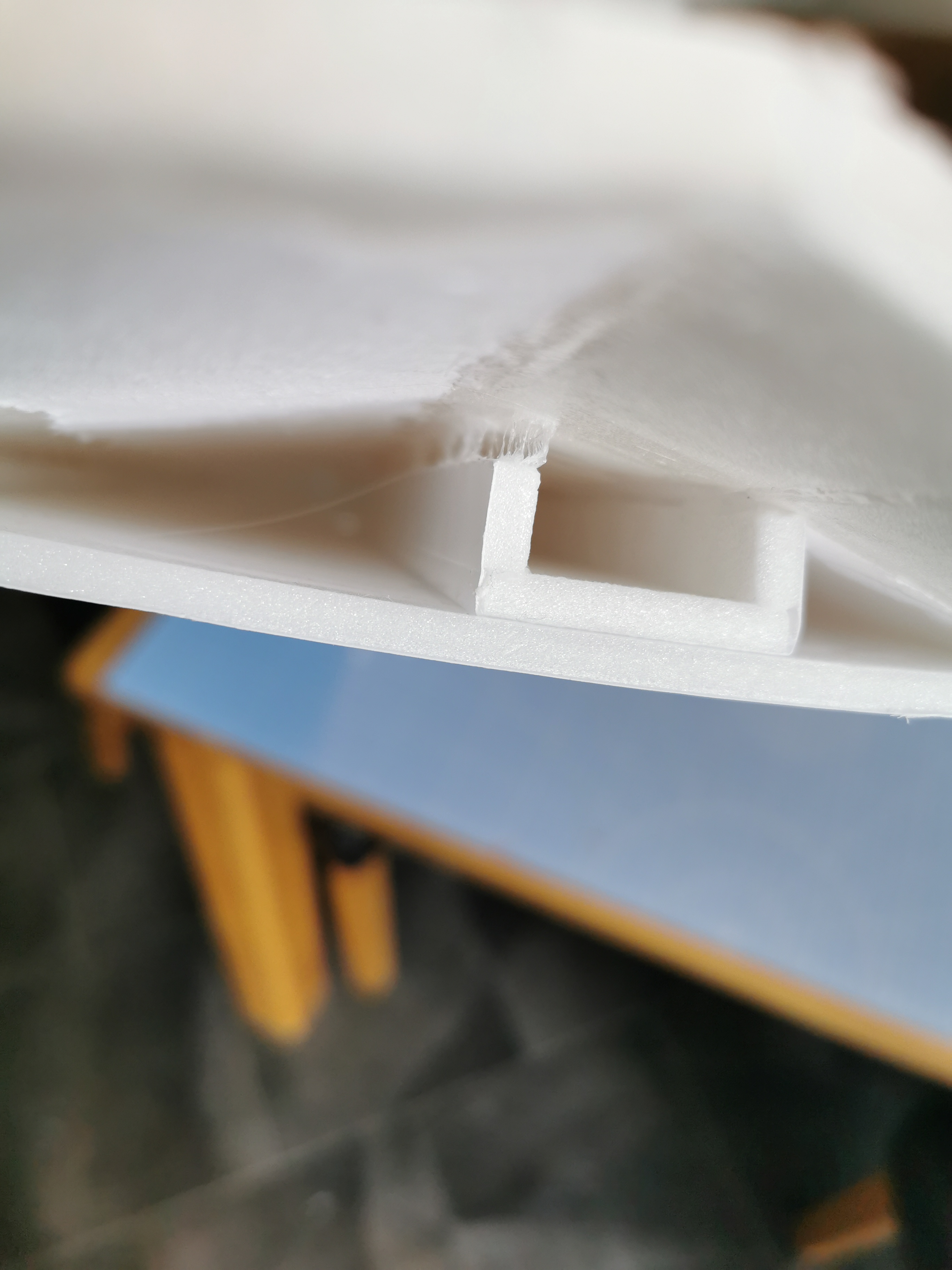 The wing feels solid enough though, so I'm hoping it'll be OK.

But I have a question about the motor and prop.

Last weekend, I flew my MUTTS for about ten minutes using the same motor, but on an 8x4 prop. It had plenty of power.

So do I need to use a 10x5 with the Scout, or would the 8x4's be enough? I was looking up about calcs for motors and props, but it all seems so complicated.

Also, with the motor and battery it's still really tail heavy. It's a 1300mah battery. I've not installed the landing gear, as I intend to hand launch it until I join a club. Which with the lockdown, is probably going to be the next time I get to fly. Does the landing gear add a lot of weight?

#20
Finished the main build, just the cosmetic parts to do.

But I have a problem. Even with everything in, and a 1300mah 3s battery as far forward as it'll go, it's still really tail heavy.

I've got 5g wheel balancing weights that I could add to balance it, but I'm reluctant to add weight.

What are my options?

I was thinking of cutting out some fuselage sections, but leaving enough struts for strength, and doing same on the tail plane.

I've got thin coloured packing tape that I plan to cover it with, so that would cover the holes. 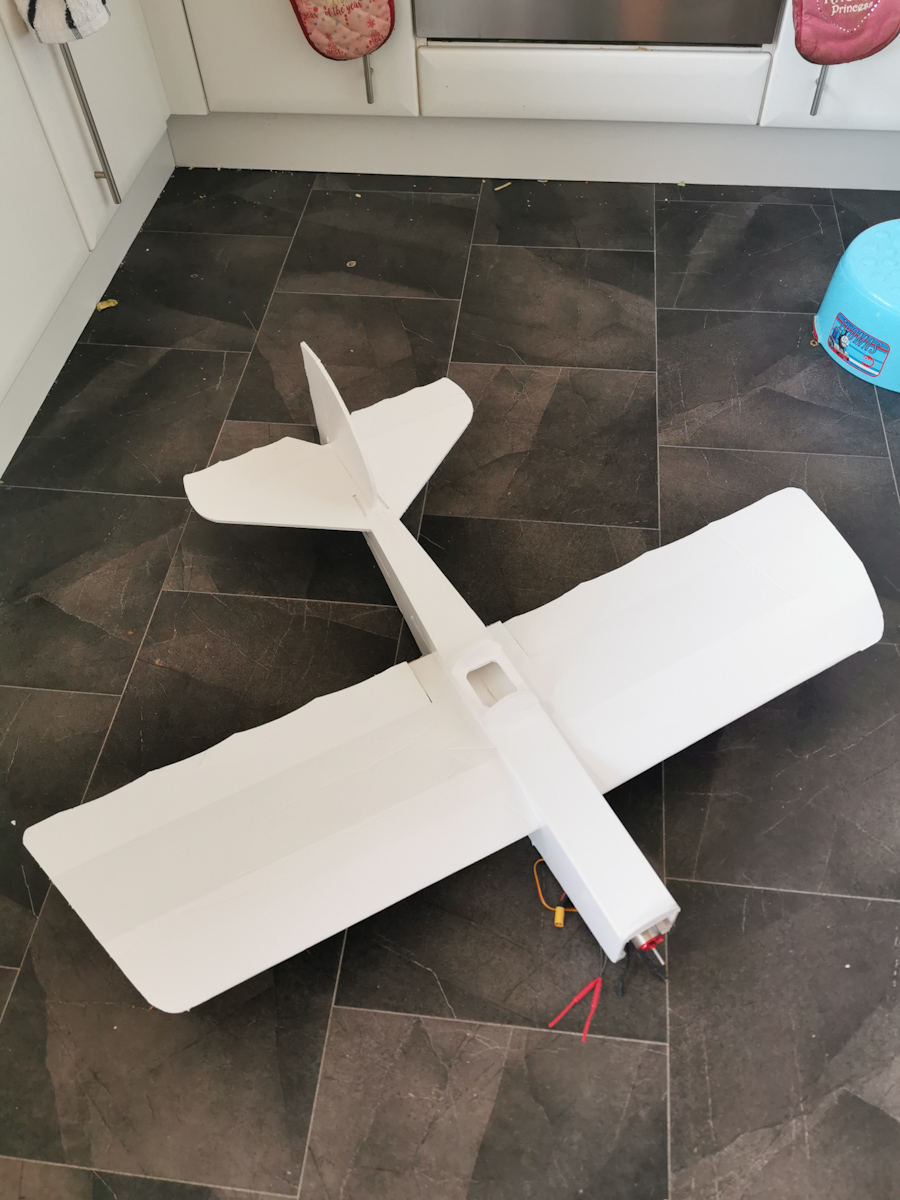