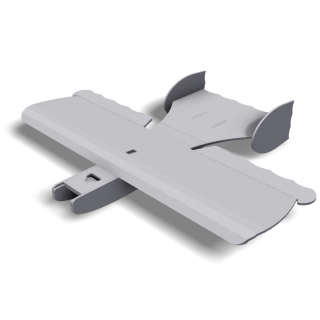 Desciption
The Ugly Wonder is another variation of the FT Bloody Wonder. If you have read the build thread or the article for the Bloody Wonder MkIII, you probably already know that I'm a huge Bloody Wonder fan. I have built, flown, and destroyed more of them than I care to count. Flying combat is one of my favorite things to do in the RC hobby. I'm lucky to have a son, brother and nephew to fly combat with from time-to-time. When we flew combat together, everyone was flying a Bloody Wonder. I always thought that it would be cool to have some different looking, but still closely matched, combat planes in the skies together. So, I started playing around with the design of the FT Bloody Wonder.

My first design was the Bloody Wonder MkIII. The MkIII to me, is really just an evolution of an already great design. I wanted to keep the same basic look and flight characteristics, but add some features to make it a little stronger, while at the same time making it easier to build. Designing the new fuselage and construction techniques I used for the MkIII, opened the door for what I was really after in the first place, a Bloody Wonder, with a whole new look.

With the design for the Ugly Wonder, there is nothing left of the original FT Bloody Wonder. Don't get me wrong, you can still see a Bloody Wonder lurking in there, but every piece of this plane has been modified to give it an entirely different look. The wing area is slightly larger, and the surface area of the vertical stabilizers has been reduced, which should make it an even more maneuverable combat ship. The redesigned vertical stabilizers were designed to still allow for the signature Bloody Wonder vertical take-off option.

The flight characteristics of the Ugly Wonder are nearly identical to the FT Bloody Wonder and the Bloody Wonder MkIII. The wing area is increased and the wing loading is lighter, so you will find that it floats a little better than the Bloody Wonder. Here are the rest of the specs: