#43
Oh no water!!! I havent been crashing too much lately, too much building... And buying and selling RC! I need to open a store! 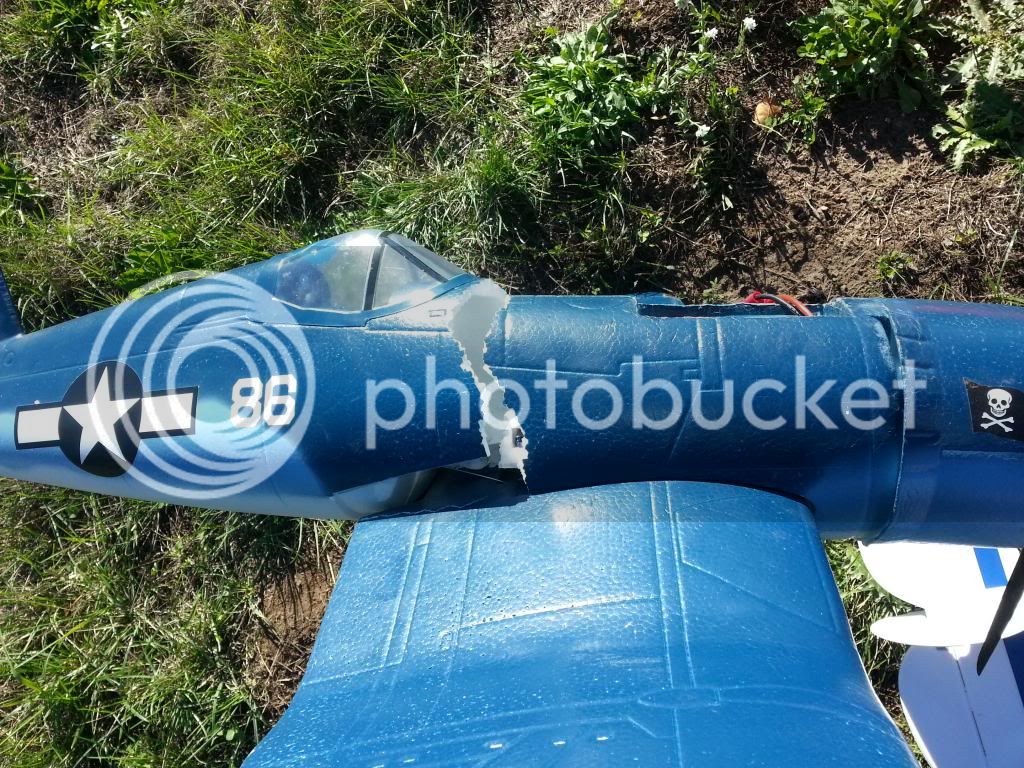 the wing is shattered on the other side as well. I will put it back together and make her look pretty, but only to donate it to a local craft brewery that has an aircrat theme. I think this would look quite good hanging on their wall.
C

#45
Hey everybody, share your crashes, rebuild pictures and techniques, we love to see em!

with really quick paint tape scheme.
Lasted about 40 minutes through multiple batteries and then lost radio control and went straight into ground from 50 feet up. After thinking about what happened, I believe I had a doughnut hole issue due to antenna orientations.

The motor mount went through the plywood mounting plate and crumbled to bits when removed.

End of the road for my 3rd FT-22, parts are destined for something different

My DC Stagger Version 1 is through, on to Version 2

#49
Maiden didnt go so well. I'm starting to spend more time repairing than flying. I might need to sacrifice something to the aeronautical gods.

#50
What happen to your radian pro nlit3n? I'm looking to buy one.
C

#51
Here's my latest crash! Searched for over 2 hours to find it, I should have had an alarm set to a switch

#52
I just went out and flew my HK bushmaster afterschool today. There was almost no wind, but I had just had a huge crash with the bushmaster and I had just repaired it. I didn,t test the flap servos before taking off, so when I deployed the flaps just above some 50 foot pine trees, only one flap dropped sending the plane in to a unrecoverable flat spin and right in to the top of a tree. There was no way I could get it down with a pole, so I ran home to get some heavy duty rope. The trees were at a school so the bottom branches were cut off so kids like me couldnt climb the trees. That ment for me to climb the tree, I would have to throw the rope over a branch and use the rope to get up the first 10ft of the tree. After I finally got to the first branch, I started to make my way up to the top of the tree. When I got to the plane, it was further out than I expected so Ihae to make a makeshift grappling hook with my rope and a branch I got from the tree. After a hour of trying to snag the plane, I finally reaached it. Now I had to get the huge plane to the ground. I made it to the bottom of the branches with the plane almost unscathed, but than I remembered the 10 foot jump to the ground. I had already thrown the rope down because I thought I wouldnt need it. Then I decided to throw the plane to the ground and home that it glides some. It didnt glide at all and the front of the plane broke clear off. Finally, I had to figure out how to get down. Some people walking past asked if I wanted any help, so I asked them if they could move one of the soccer goals up to the tree so I could mabey stand on it to get down. They did and I got down. After going home and fixing the plane, I ofcourse went and flew that same plane at the same place, but with both flap servos pluged in this time.

#53
I'm really sad I didn't get any pictures but I will try to describe my friends crash. He is a newer pilot that insisted on learning to fly a Big Stik 40 Nitro. He really thought it looked cool. Well he had been flying on the buddy box for few weeks and seemed like he was getting the hang of it until he decided to take it out around a group of trees. The trees were not a problem but the distance was really getting out there. The Big Stik was looking really small and started to lose orientation when my other buddy took over. Well something happened and it rolled over full throttle and went straight into the neighbors barn roof. Who knew that a small balsa plane would go through a brand new roof. Shingles, 1/2 osb, it got hung in the hole by the tail feathers. It all worked out well with the neighbors, we were nervous they would be upset being that it was a new building. We fly in an area of about 100 acres and only 1 house within a mile and that's the one he hit. Wish I had pics. Needless to say the Big Stick is kindling.

It was a beautiful evening in December. About 65 degrees and the wind was calm. I had flown my Mustang several times but had recently put on a new 9X8 wood prop and it was flying exceptionally well that night. About dusk I flipped on the green LED's and the crew watching couldn't believe how good it looked. I made several low passes at full throttle and just after passing where we were standing I begin a slow left bank across the field. It was flying great. All of a sudden I couldn't believe my eyes. CRASH right into the top of a Georgia pine tree. It made a gut wrenching noise like fingernails on a chalk board. Everyone watching including myself thought I was at least 100 feet from those trees. I guess the dark skys and the LED lights played a trick on me.

Nothing I could do but watch the lights go dimmer and dimmer. They finally went out. The next morning I hired a tree service to fetch my plane. It was a first for them. You should have seen that kid shimmy up that tree like a monkey. Needless to say the Mustang took it hard. No repair here but all the electronics seem to be in good working order. Good thing is about $4 worth of foam board and glue and I will have a new one.

#55
Thanks for the shout out Chris!

Just add some hot glue and tape I bet you can get the mustang back in the air with some battle scars until ya build another!
I need to start building again! Been buying a lot of used off CL

Mentor
#56
This is what happened when my Cessna hit a tree. The firewall broke, launching electronics out in a debris field one hundred feet long. I spent an our in the cold snow looking for my battery and ESC which was in a tree. Looking forward to rebuilding the plane this winter because the floats were fun!

The plane crashed while carrying 12000mAh 3s after flying for about 45 min. I was catching some lift in a thermal on the opposite end of the athletic complex where I fly. The plane is pretty big so I could see it from far away, but I lost radio contact and never got it back. It nosed into the concrete from about 300ft under power.

I stripped all the electronics and pulled out the carbon spar.

Here are two of the batteries after soaking for two days in saltwater. The solution was clear when I started, but it filled with a bluish-white flakes and turned dark brown over time.

#58
A few weeks ago I had nosed my Bloody Wonder into the ground while practicing inverted figure 8's. There was some damage to the nose, which I repaired by removing the paper and replacing with some packing tape.

Last weekend, I was re-maidening my Bloody Wonder with the repairs. Things went all right for the first minute or two. I started with some slow circles, working up to mild aerobatics. Then, as I was about to fly in front of the flight line, some pilots to my left announced that they were launching. I pulled back on the elevator to clear some space, and suddenly there was a loud "crack" and the plane came apart in midair.

The front of the power pod had come off the pegs. Because the skewer at the back is behind the CG, the thrust from the motor pulled the nose of the (rest of the) plane up into a high-speed stall. The airframe basically did a hockey stop in midair, but the power pod kept going. The "crack" was the sound of the BBQ skewer and the back 2 inches of the power pod breaking in half.

All things considered, I got off pretty lightly. When the ESC detached from the receiver, it went immediately to full throttle. This caused the power pod to start rotating violently, which in turn caused the battery to detach from the bottom of the power pod, shutting down the motor. The power pod hit the ground at an angle and came to a stop without even breaking the prop. The battery was ejected at a similarly shallow trajectory and landed about 10 feet to the left, also undamaged. The rest of the airframe settled gently to the ground with only some minor damage to the tail fin.

The root cause of the incident? That repair to the nose wasn't quite as stiff as I thought it was:

Oops. Lesson learned: When in doubt, cut off the nose and glue in some fresh foam board!
J

Day 3 Of Learning to Fly the Radian Pro- lost it over a ridge - I'm writing a blog, so all the bloody details will be over there, see my signature for the link.

One of the things I'm trying to learn is to keep the plane close to the edge of the slope I'm standing on and not let it get too far away. It will do a very tight turn, but I'm not able to achieve that all the time - need more practice.

When I lost it, I punched the throttle and it went into a loop, I saw it pop up but couldn't do anything about it. After the second loop, I shut down the throttle. It must have went nose down into the side of the next hill.

Here are the parts:

The ground was soft enough to save the spinner and motor, but all the rest of plane's momentum caused energy to push out the sides of the cockpit. I could rush it, but I want to see if I can do a nice restore job on it, working a couple of hours a day.

The construction is two molded halves, and as you can maybe see in the last picture, about 60% of the joint has separated.

I plan to cut the remaining cockpit section along the manufacturer's glue line, then use the boiling water method to see if the cockpit will return to it's original shape.

From there I'm hoping to glue it back together with Scotch 77 Spray Adhesive using the same method that the Zagi HP build uses.

Most of that is landing rash, the little plastic thing the Radian has is useless. It's the separation that is a result of this crash.

I was on the east side of the Berkeley Marina in a 10 acre (?) field, it got too close to the water and I tried to land it. It skipped and went over the edge and disappeared. I expected to find it floating . . .
Last edited: Aug 16, 2015
J

An Update to my last post. I cut the nose/cockpit section in half along the glue joint so I could try the hot water method to restore the shape.

The side shown on the left is seriously bent, with the side shown to the right bent, but not so much. The idea is to get it back to where the plastic canopy fits perfectly.