#21
Wings, my favorite part. Most of the ribs are the same profile so it was disappointing to see how poorly matched the die-cut ribs are. I stacked all the matching ribs and pinned them together. Using a sanding block I made them all the same profile. Once again, some of the notches for the spars were poorly cut so the worst ones were CA glued in place and then re-cut. After a lot of fitting and sanding the top wing is pinned down and ready to glue. I must've built a pretty lumpy looking airplane when I was a boy because I don't remember it taking this much time to make sure the pieces all fit properly.

Mentor
#22
Die crunched ribs were always a mess - I remember back in the 80's gluing the whole wing together and then using a sanding bar to try and level things when they were in place. Which often involved breaking a rib or two. Was easily 5 or 6 planes in before I learned about stacking the ribs first - slow learner

#23
I just read through the thread and progress looks really good so far!

#24
rockyboy said:
Was easily 5 or 6 planes in before I learned about stacking the ribs first - slow learner
Click to expand...
I remember cracking balsa trying to smooth out and even things up. You learned a lot faster than me! I didn't learn this trick until last winter when I built the "Sunbird".

Mentor
#25
TooJung2Die said:
I remember cracking balsa trying to smooth out and even things up. You learned a lot faster than me! I didn't learn this trick until last winter when I built the "Sunbird".
Click to expand...
"Sunbird"... that just gave me shivers thinking about mine!

#26
Joker 53150 said:
"Sunbird"... that just gave me shivers thinking about mine!
Click to expand...
You were the trail blazer with that one. My "Sunbird" build was a walk in the park by comparison because you already found and solved all the gotchas! She's a fantastic flier and thermal hunter. The hardest part about flying the "Sunbird" is landing her because she doesn't want to come down. You have to flip up the spoilers and fight her to the ground.

The top wing is assembled. I didn't think 1" of dihedral each side was going to be enough but it looks right so that's how it is. Gussets are getting added to the dihedral joints and ribs where the cabane struts and wing struts will mount. Gussets add strength and give the covering something to stick to around the holes. 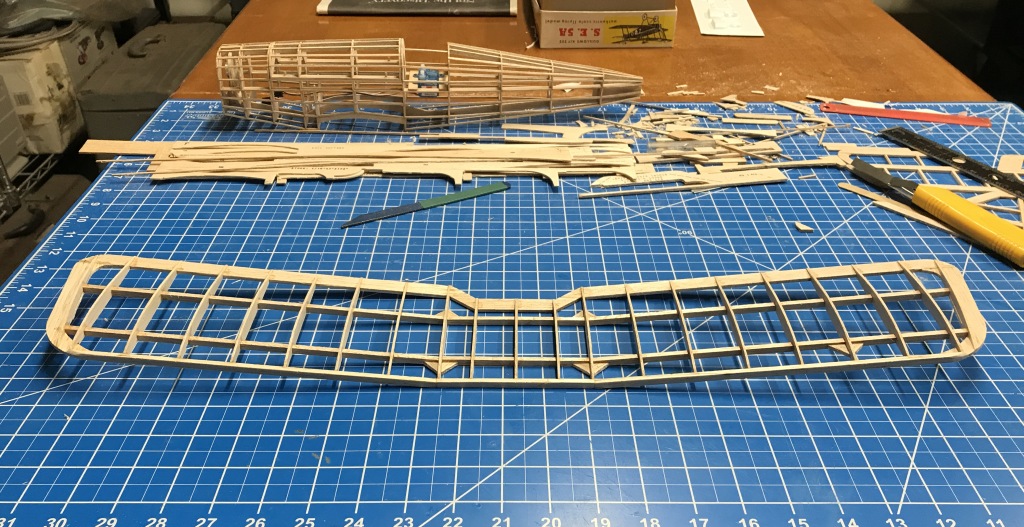 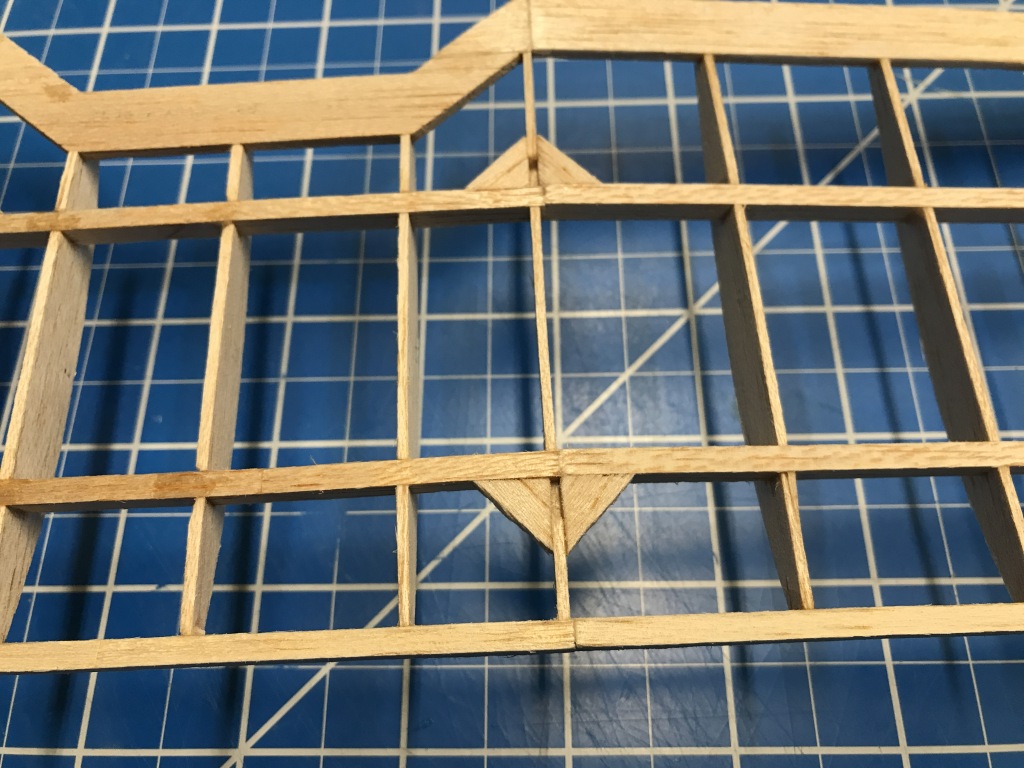 The bottom wing assembly will be next. Then lots of sanding to shape the leading and trailing edges and tidy it up for covering.
Jon

#27
I saw how Joker stacked and aligned the ribs on his Giant Stick. Using the spar notches is a better way to line up the ribs than the way I did it. So that's how I stacked the ribs for sanding on the bottom wing. Thanks Joker. When you follow someone else's build you always learn something.

Here are the bottom wing ribs stacked for sanding. I had to smile when I mentally compared this teeny tiny stack with the enormous stack of ribs for Joker's Giant Stick (I always thought it was spelled Stik). 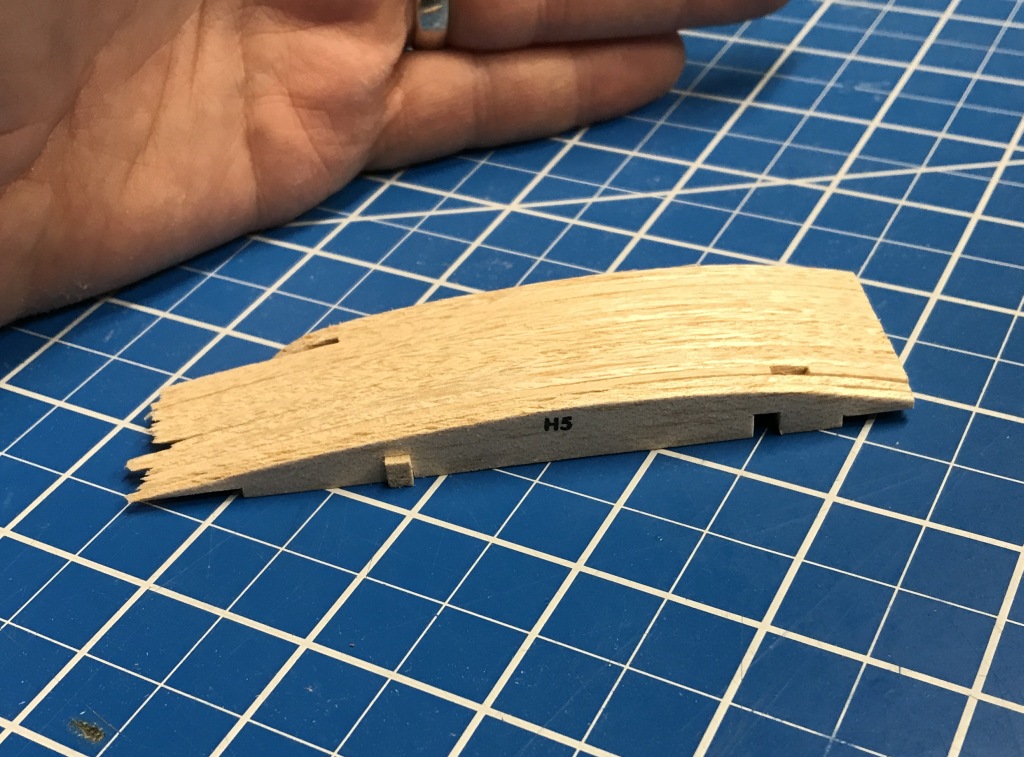 This is the problem I keep encountering with the die-cut notches. This notch would've been too wide and too deep so I CA glue the notch in place and re-cut the notch the correct size. 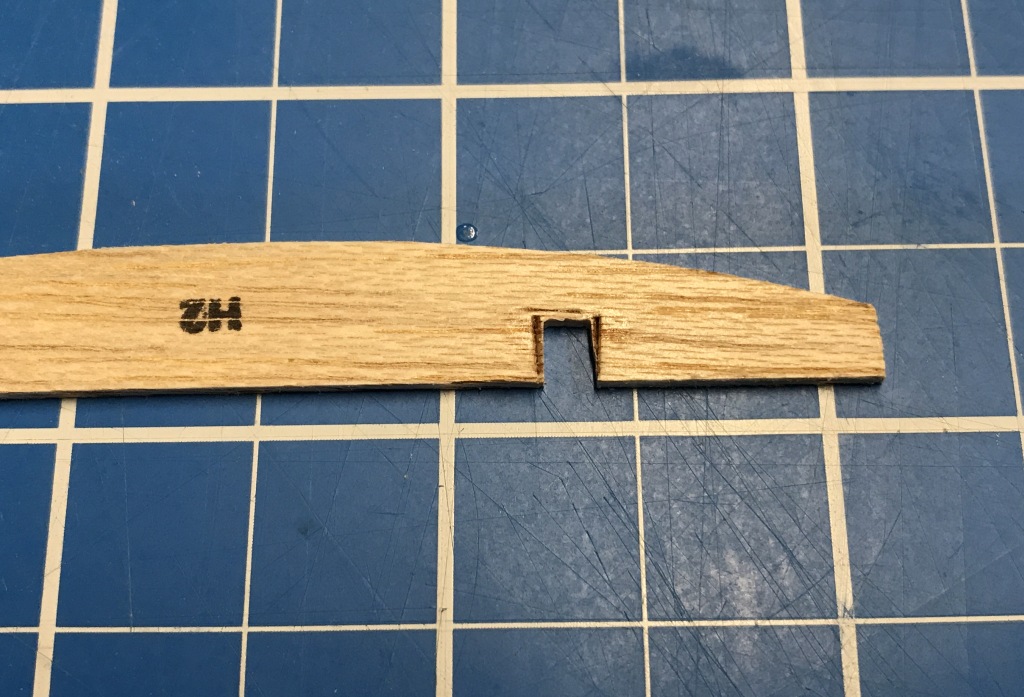 Bottom wing pinned down. After a final inspection for fit it gets glued in place. Tomorrow.

Mentor
#28
That’s one reason I enjoy reading lots of build threads, there is always something to learn! . Yeah, quite the size difference between the rib stacks between our planes.

#29
Looking at how the top wing is mounted it seems rather flimsy. It won't take much of a bump to break off the top wing. The wing struts and cabane struts are 3/32" balsa stock. I'm deciding if they should be made from sturdier wood like fir or spruce. Maybe even add rigging made from braided fishing line. My multi-wing foam board airplanes have sturdier top wings.

The top wing (in front) is ready to cover. The bottom wing needs gussets and sanding. 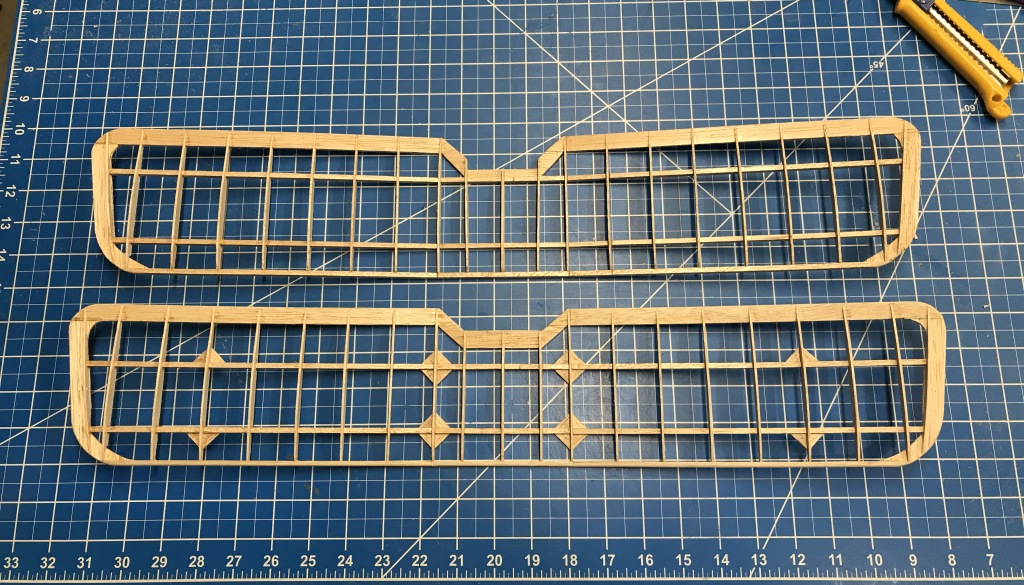 #30
Trying as hard as I know how and using a square I still didn't get all the bulkheads perfectly square to the keel. A little balsa wood surgery is called for to square up the bulkhead at the leading edge of the bottom wing. A razor saw is perfect for cutting the stringers loose. The bulkhead is then wet with some 50% rubbing alcohol and held at the correct angle by rubber band. When it dries the stringers will be put back in. 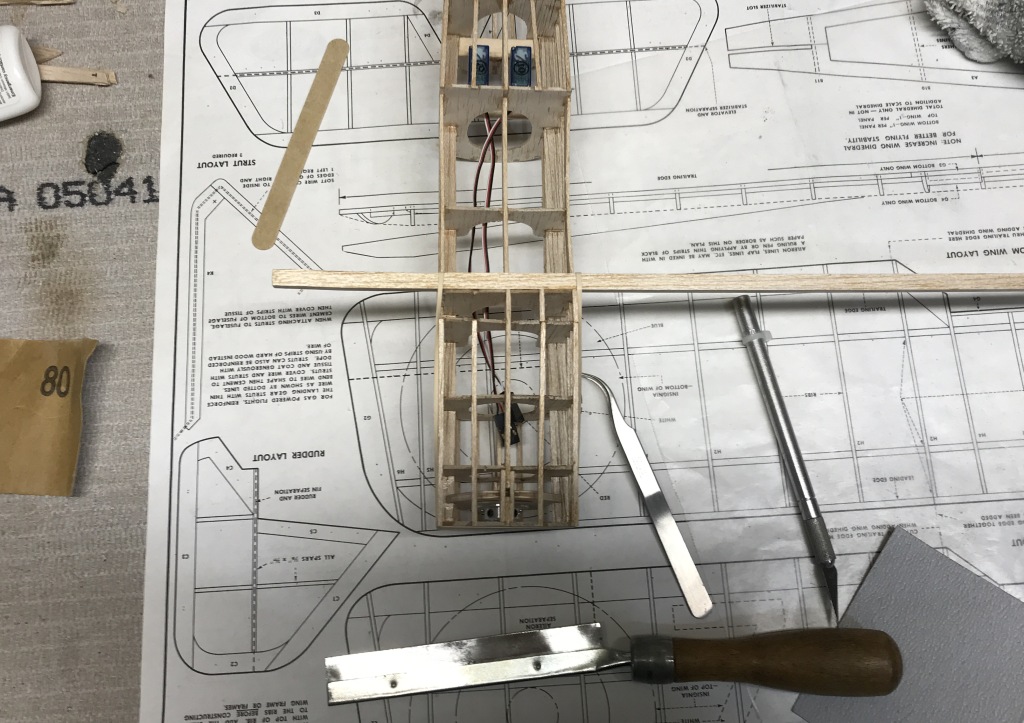 Everything looks misaligned in the photo. Trust me, it's not that bad.
Jon
Last edited: Oct 11, 2018

#31
Wow, it's coming along great. I'm afraid I would crush such a delicate build like this with my gorilla hands...

#32
Applying the covering film is when the risk of breaking balsa is the highest. I really don't have to be as OCD with this build as some of my previous balsa builds. The plan is to paint this with opaque olive green over the covering film.

Did a search of this forum for Guillow's RC builds. There aren't many and none of them ever flew as far as I know. I am resolved to finish this and post a flight video.

#33
You can't tell how the major parts fit together until you try them. Not enough detail in the instructions. There's a lot of "Ah-ha! That's how it's supposed to fit together." 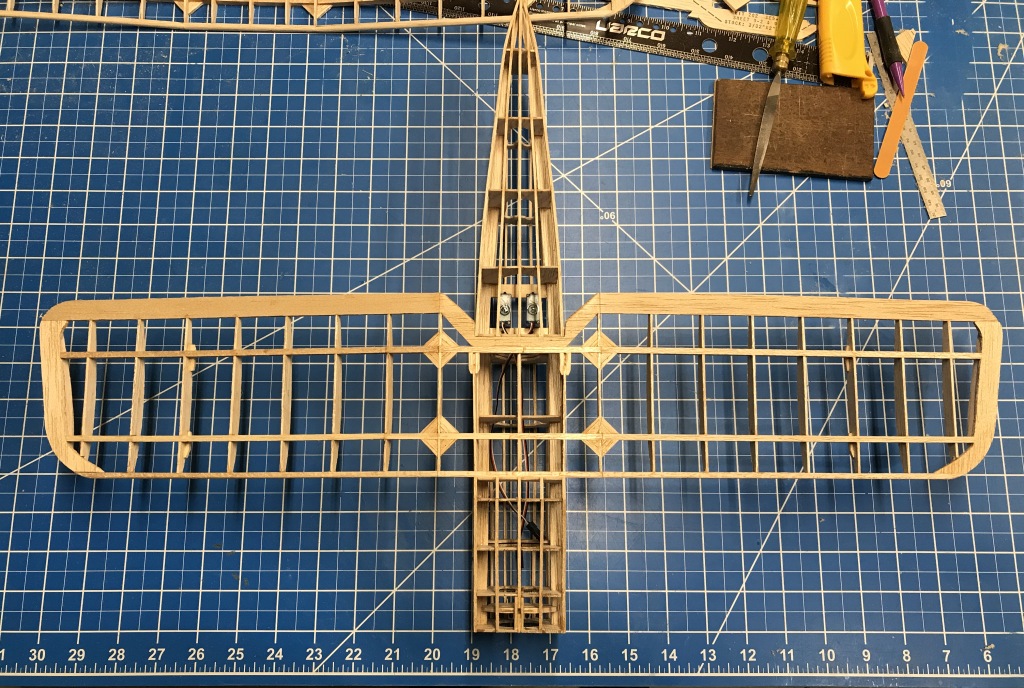 There is a whole long list of more stuff to do but the major assemblies are assembled. 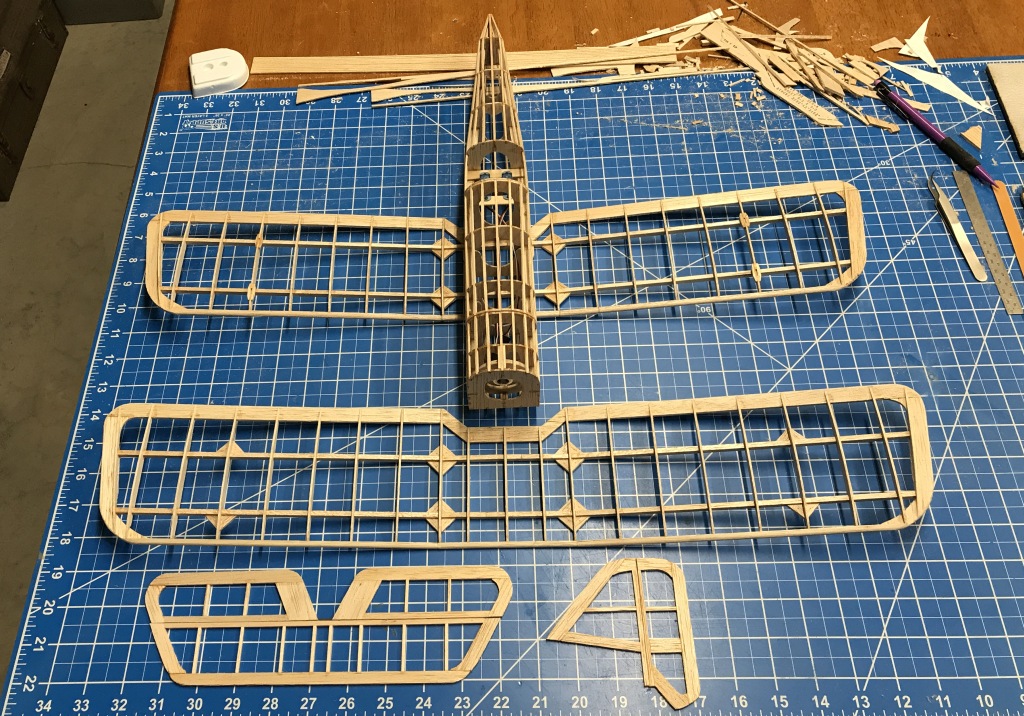 Soon there will be some covering film going on. I can feel it.
Jon

#34
Nope, no covering going on yet. There were a bunch of little fuselage details that had to be completed first.

Magnets are embedded to hold on the removable section of the fuselage. The magnets inside brushless motors are very strong. I'm sure you have some dead motors laying around. These magnets were too big so I chopped a couple of them in half with a Dremel cutting wheel. 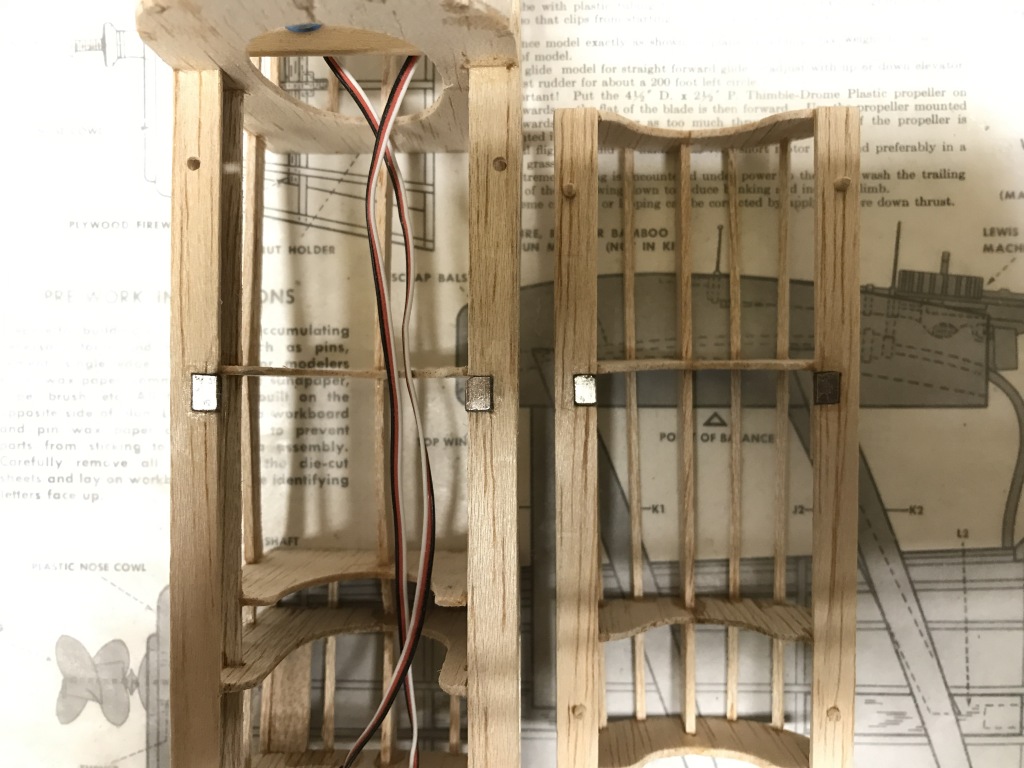 The bulkhead in front of the cockpit looked thin and vulnerable after cutting the stringers for the removable top. A doubler was glued to the bulkhead and sanded to shape. 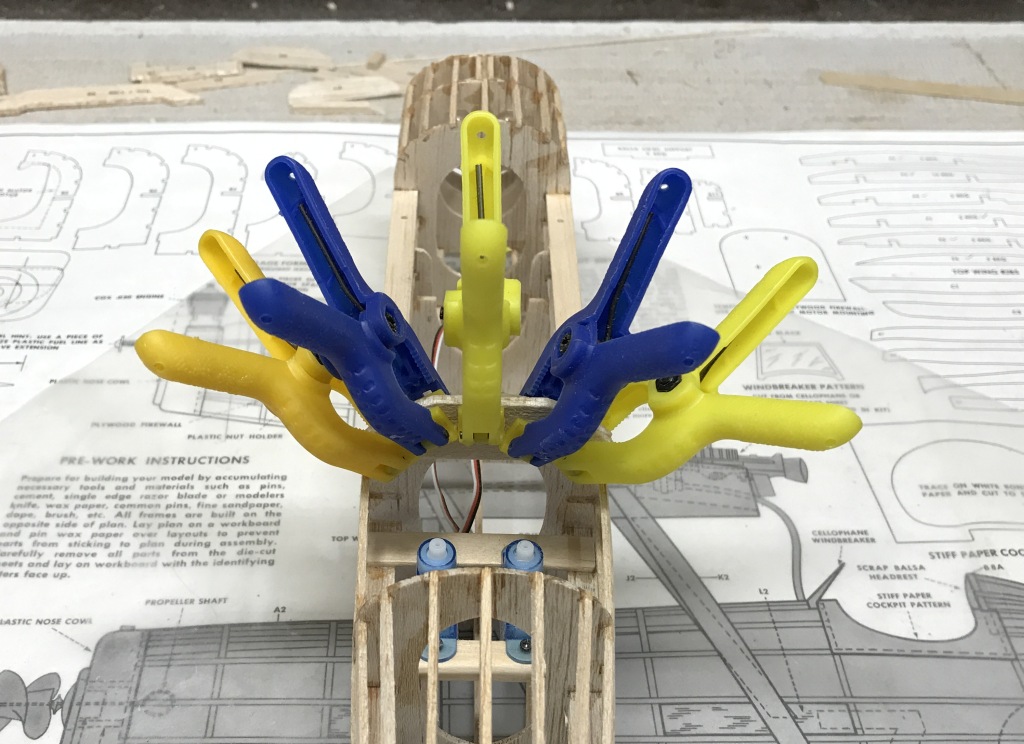 The die-cut attachment fillers for the cabane struts fit too loosely so I made new ones from scrap balsa. I remember the landing gear was weak on the SE5a I built many years ago. The front attachment points for the landing gear looked weak so gussets were added in that spot. Anything I can think of to beef up that assembly will be used. These tiny details are circled. 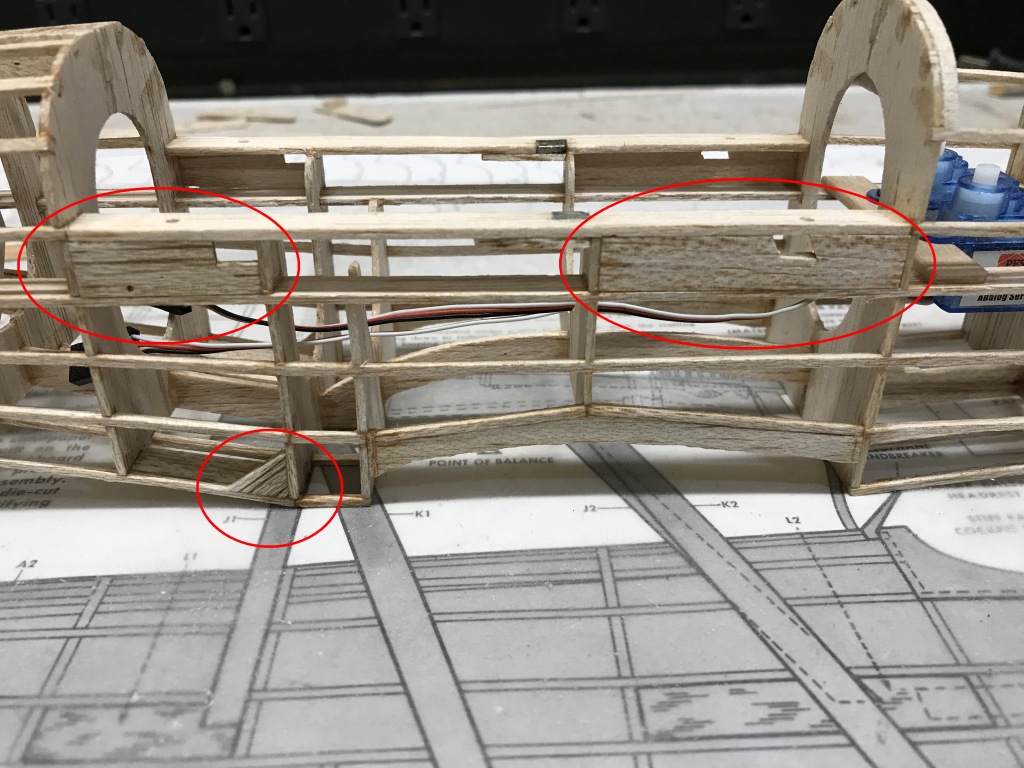 I don't like to glue parts on top of covering film. I remove film so there is wood to wood joints. The top keel where the vertical stabilizer will attach is 1/16" thick. The vertical stab is made of 3/32" stock. There wasn't much wood to glue the stab to and nowhere for the covering film to stick. Some stringer stock was added to each side of the keel to make it 3/16" thick. 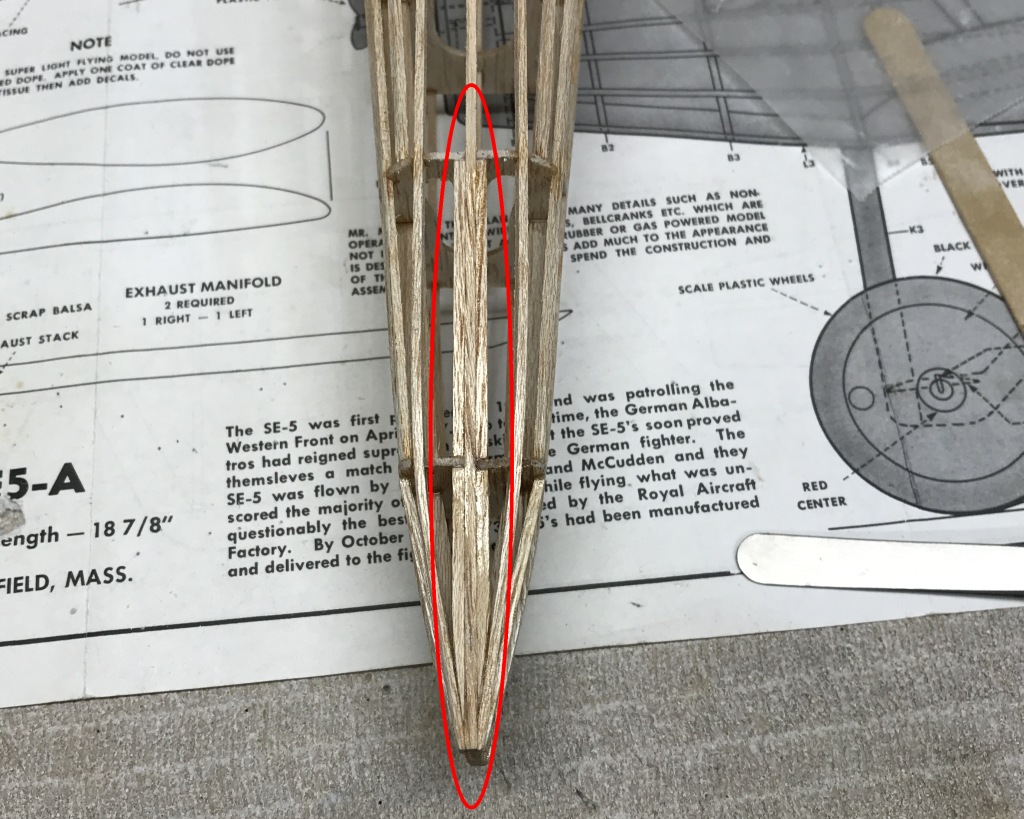 I noticed a similar problem under the slot for the horizontal stabilizer. Nowhere for the covering film to attach after the slot was cut open. Some more stringers were added under the slot so the film has a surface to stick to. 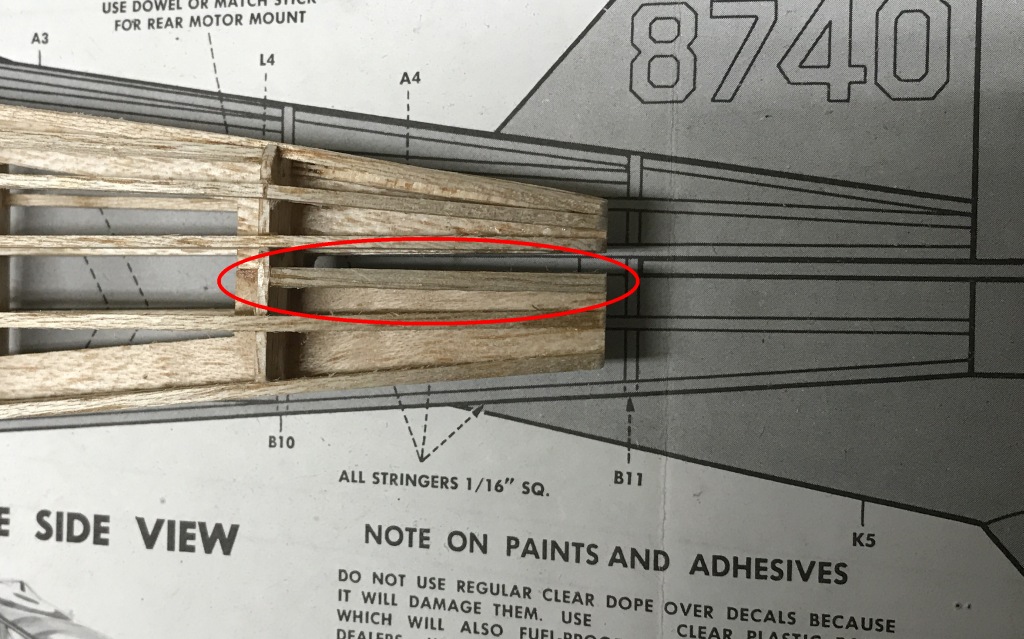 I'd like to get some covering film done but I really should get to work on the landing gear and wing struts. That way if there are any modifications to be made I won't be peeling off the new covering film to get to the balsa.

#35
The headrest is done. I found the 1/16"x3/32" stock that was missing when I built the tail. I've been looking at them for weeks but they didn't catch my eye because they're buried among the 1/16" square stock. See them in the photo? I didn't. Doh! 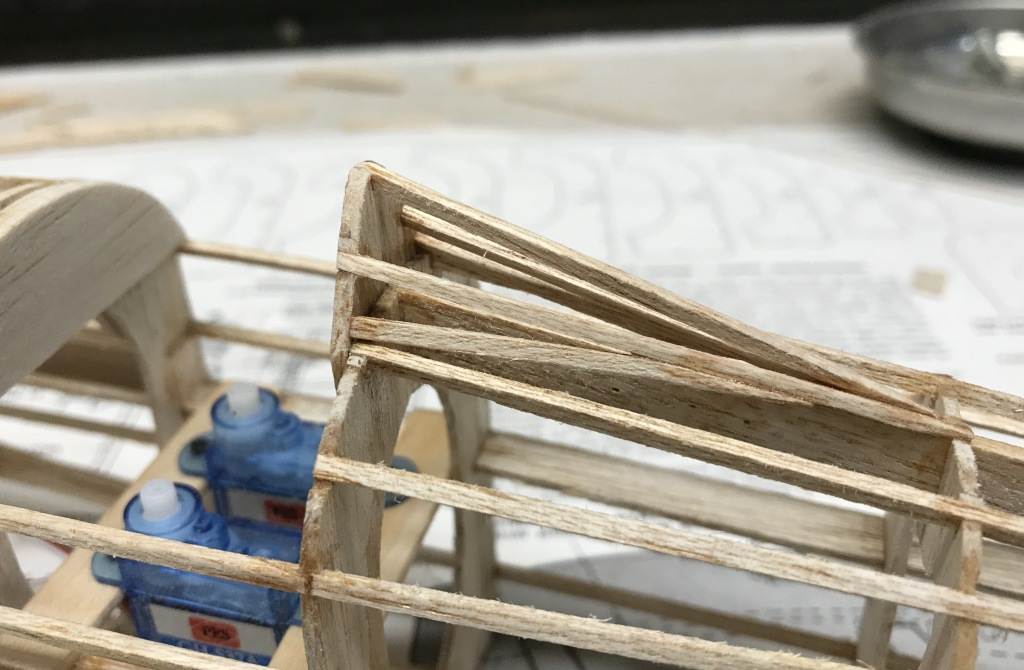 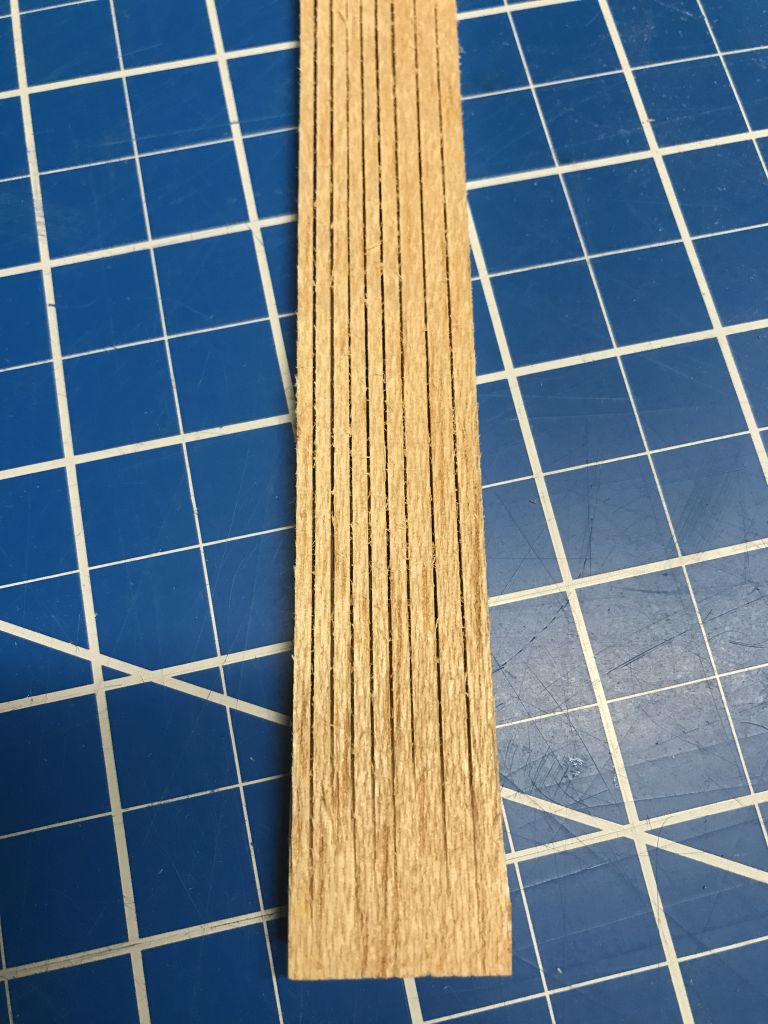 Mentor
#36
Great tip on doubling the stringers where the tail surfaces attach! And I need to remember to not throw out the next motor I burn up and harvest the magnets...

#38
Built a bunch of these rubber powered stick planes back in the early 60`s a brand new kit was 79 cents tissue paper was the covering at the time, which also came in the kit.

#39
Thanks guys!
I built a few of these back in the day too. Guess I'm enjoying a second childhood. They still put tissue in the kits but this one will be covered with 1.5 mil heat shrink film.

Blocks of balsa are glued to the front and shaped to hold the vacuum formed plastic nose cowl in place. After painting a couple of tiny servo screws will keep it in place and allow it to be removed later if needed. 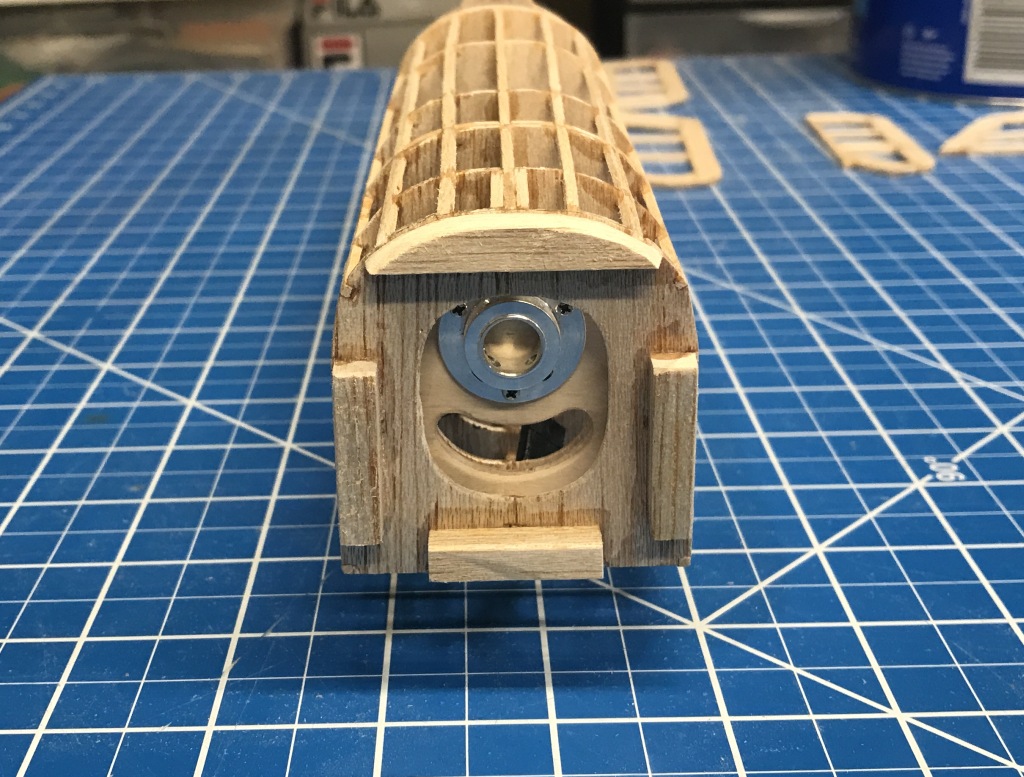 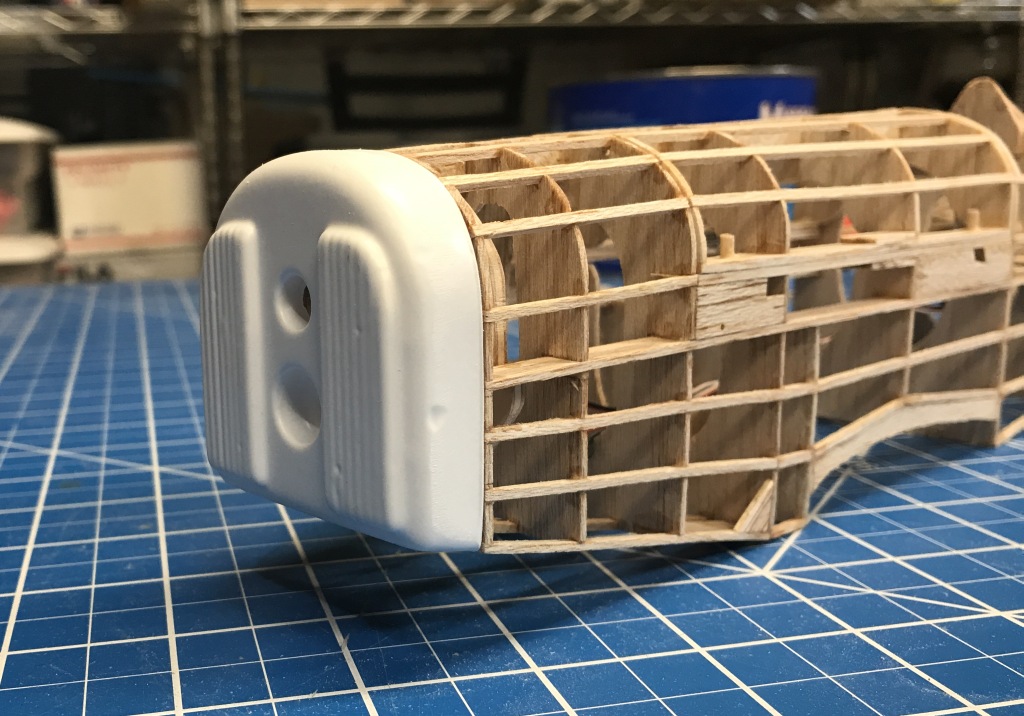 Since there is now a surplus of 1/16"x3/32" strip stock diagonals were added to the tail surfaces to strengthen them. 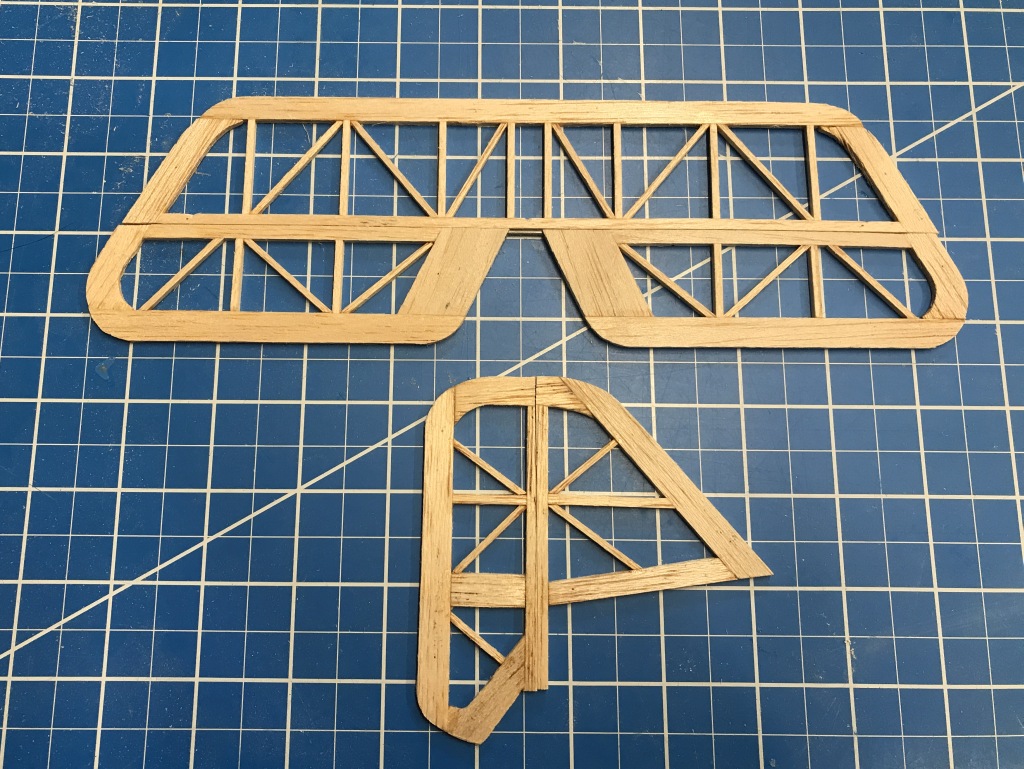 There's a lot more wood in this airplane than I expected. So far the whole pile of parts minus motor, ESC, Rx, and battery weighs 3.4 ounces (97 grams). If this comes in under 8.5 ounces (241 grams) AUW I'll be surprised. It may not be the slow floater I hoped for.

#40
I noticed something that seems a bit odd. There is a few degrees of incidence on the bottom wing but the top wing is at zero degrees. I measured this in the plan. It looks the same on the bottom wing when installed. I thought the wings should both match. Could it be an advantage to have the wings at different angles so one wing stalls at a different angle than the other? One thing is for sure, we'll find out when it is in the air!
You must log in or register to reply here.
Share: Facebook Twitter Google+ Reddit Pinterest Tumblr WhatsApp Email Link
Menu
Log in
Register