#41
TooJung2Die said:
I noticed something that seems a bit odd. There is a few degrees of incidence on the bottom wing but the top wing is at zero degrees. I measured this in the plan. It looks the same on the bottom wing when installed. I thought the wings should both match. Could it be an advantage to have the wings at different angles so one wing stalls at a different angle than the other? One thing is for sure, we'll find out when it is in the air!
Click to expand...
Yes.
Biplanes often have the upper wing set with a lower angle of incidence because the downwash from the upper wing artificially decreases the angle of attack of the lower wing. The effect is minimal from what I've read. Some biplanes will be rigged the other way, so that the upper wing stalls first, keeping the lower wing flying aiding in control through stall recovery. The effects of these factors are affected by many variables and in practice setting both wings to the same incidence is satisfactory for most aircraft.

#42
The wings on a biplane can have different incidence. It is not uncommon. Below is a plan showing an incidence difference. I had on of these that flew nicely. Well, except for being sensitive to ground looping. 😮

#43
Thanks, I knew there had to be a logical explanation for the different angles of attack between the upper an lower wings. I didn't think there was an error in the plans of an airplane kit that has been in production for generations.

Covering with the document laminating film has commenced! The tail feathers and center section of the wing are covered. I caught some overhead light reflection in the film so you can see it a bit. The pieces are laying on a sheet of the film. It's hazy and becomes crystal clear when heated with an iron or heat gun. 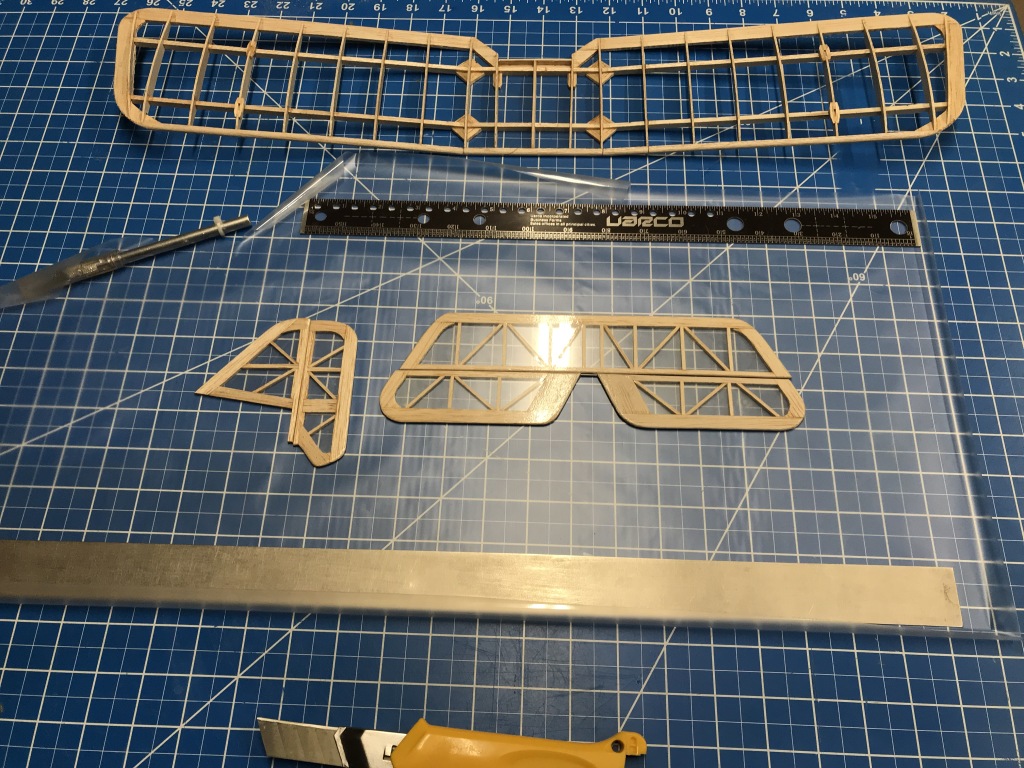 #44
Covering station and tools. The bags are made from the legs of some old sweat pants and filled with pinto beans. 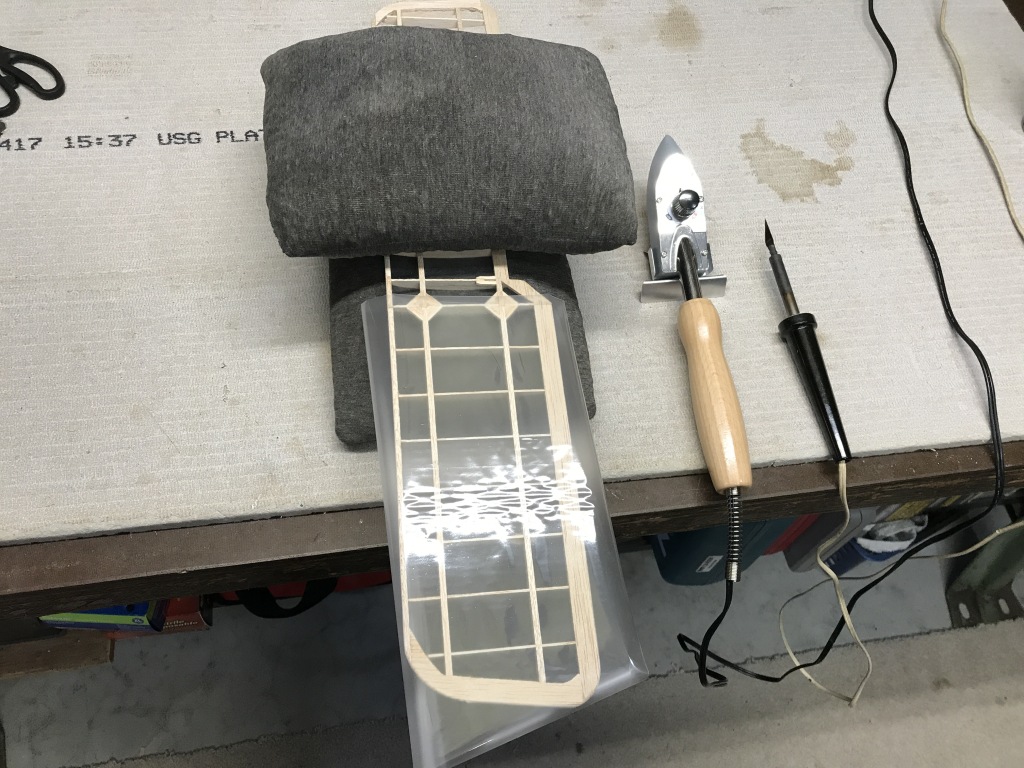 #45
There was a major breakthrough today with my covering skills. I've said it before but I'll say it again, I suck at applying heat shrink covering films. After a lot of cussing and swearing I had both wings covered except for the top half of one wing. I wasn't really happy with how they had turned out but it was as good as I've ever done.

I decided to try covering the last section including the wing tip in one piece using the heat gun. What I discovered is how much the film will stretch as well as shrink when enough heat is applied with a heat gun.

I left plenty of extra film overhang so it would be easy to hold. I put a work glove on my left hand and heat gun in my right. It takes some tugging and pulling but I found the film will stretch over the compound curves of the wing tip. Equally important for me is there's no hurry to get it perfect all at once. I kept pulling and stretching, keeping tension and letting the film cool when the wrinkle I was fighting disappeared. Little by little I was able to pull out all the wrinkles. For the first time ever I had a wrinkle free wing that was covered with one piece of film. I've watched video of this but never could do it myself until now.

The next thing I learned is do not trim off the excess film until after it has all been heat shrunk. There may be a wrinkle that heat alone won't get out. Having the extra still attached lets you reheat and pull out those tough spots. 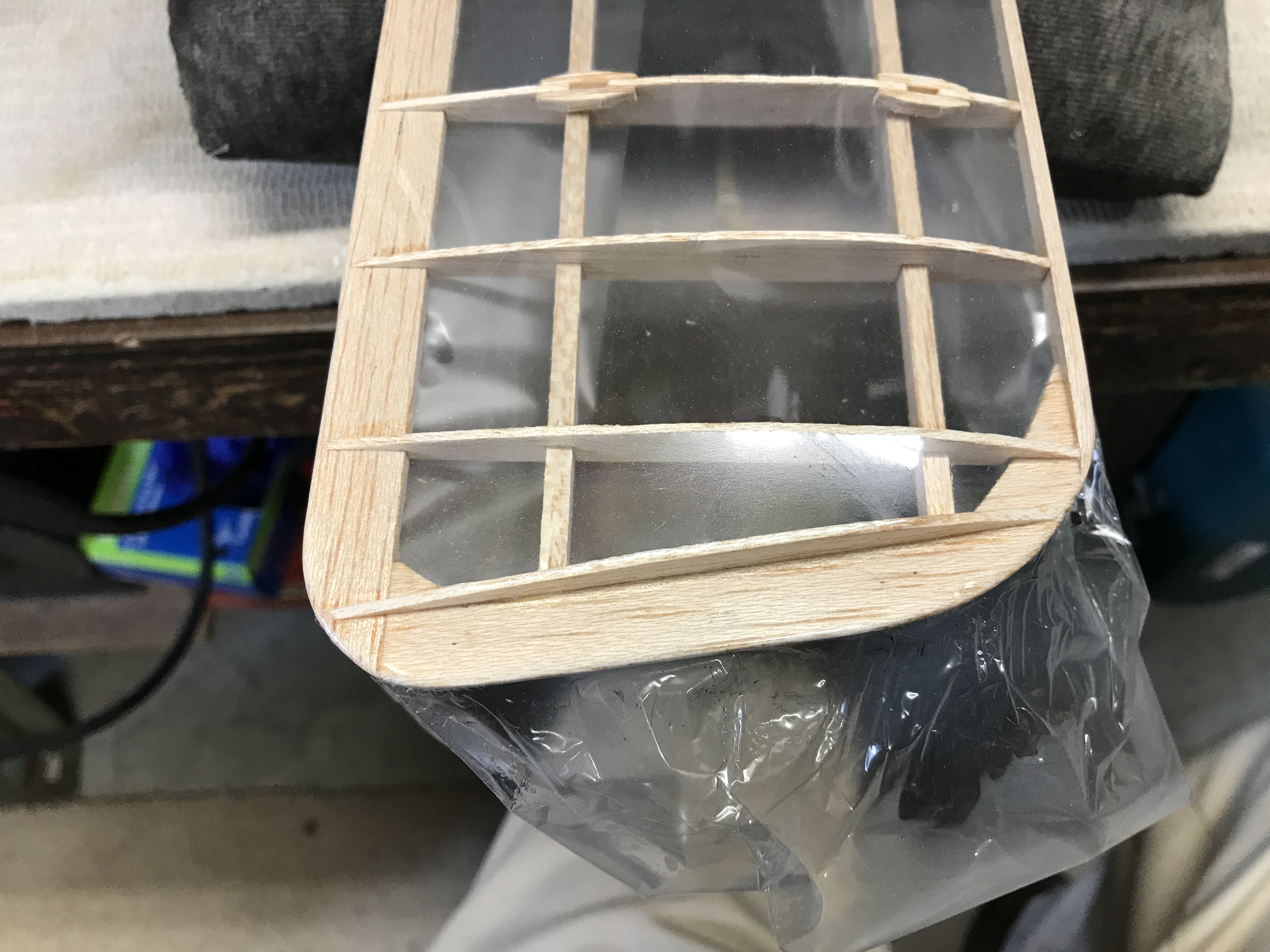 I was so happy with these discoveries I stripped off all the film on the wings I had applied up to that point and started over. I may get the hang of this stuff someday after all.

The SE5a is going to be painted a traditional olive green WWI color scheme. I hope the paint will be translucent to allow the framework to be seen when backlit.

#48
Wings and tail are covered. Rudder and elevator are hinged with Tyvek paper. It's not really paper, it is a non-woven synthetic cloth and makes a very tough, flexible CA hinge material. There's an unlimited supply for free at the US Post Office. The card stock cockpit cover is glued in place. 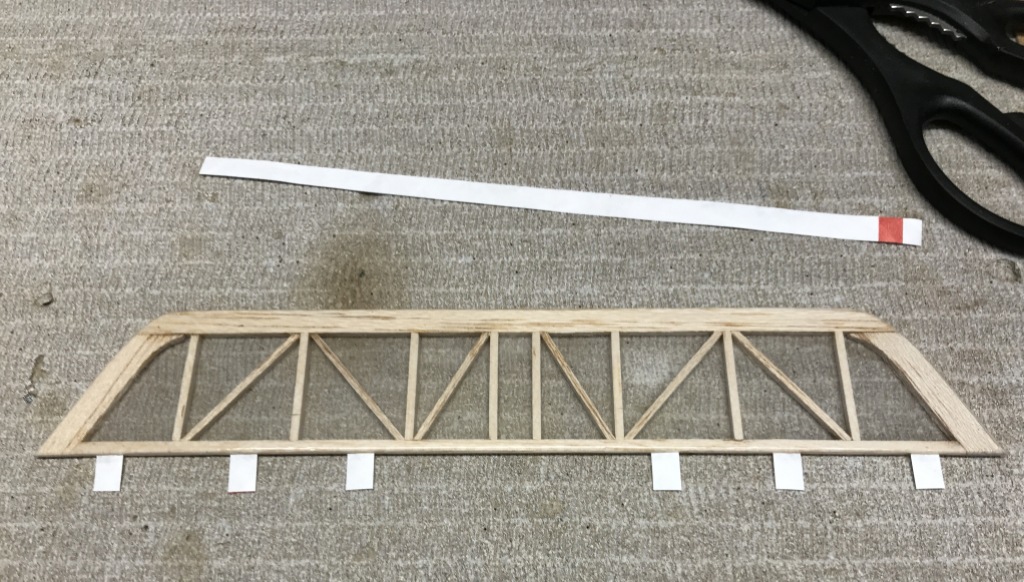 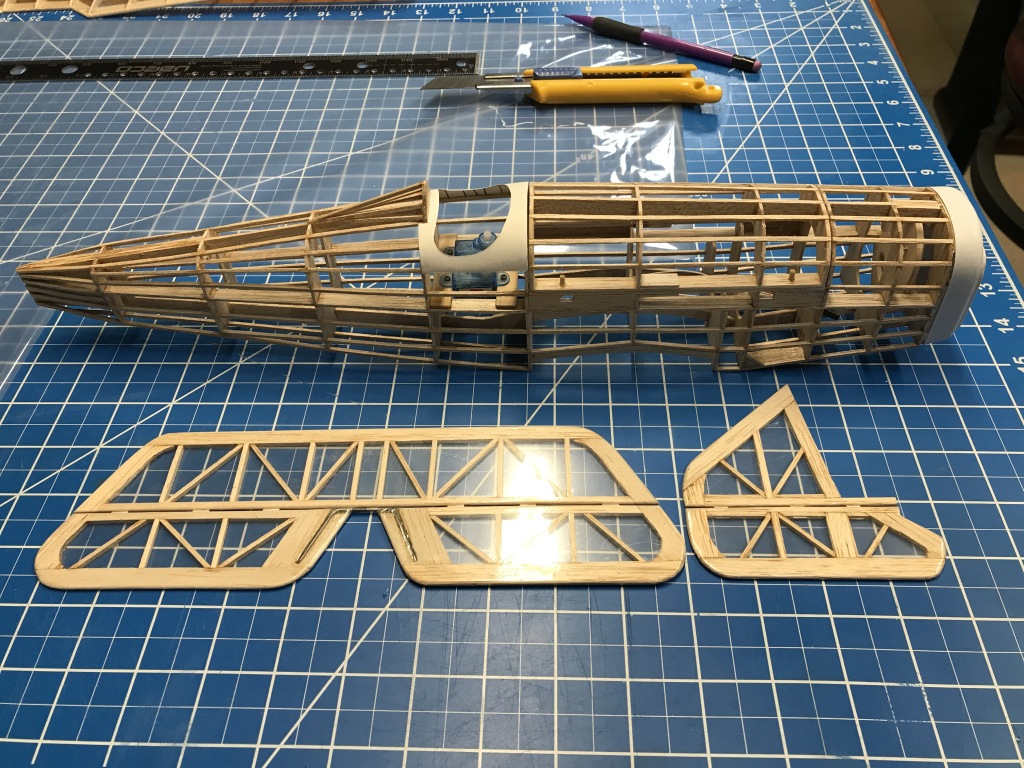 #50
Finished all the covering today. I'm pretty happy with how it all turned out. I better not mess it up with a bad paint job. 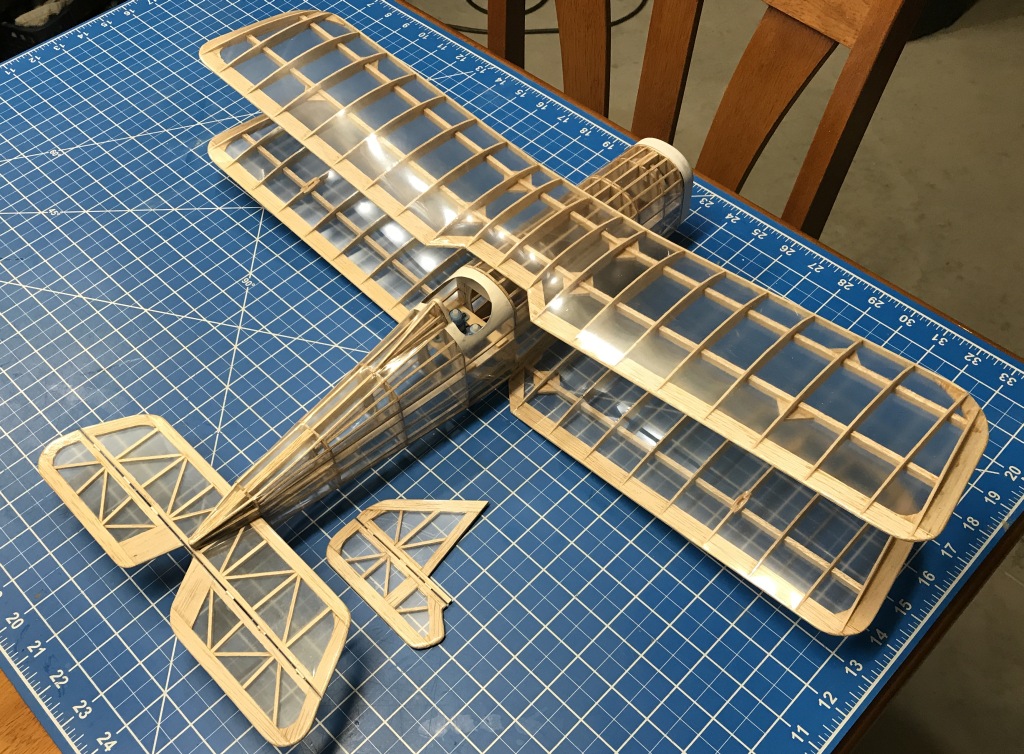 The motor is mounted and it clears the inside of the plastic nose cowl. I thought for sure it was going to have a big hole up front. 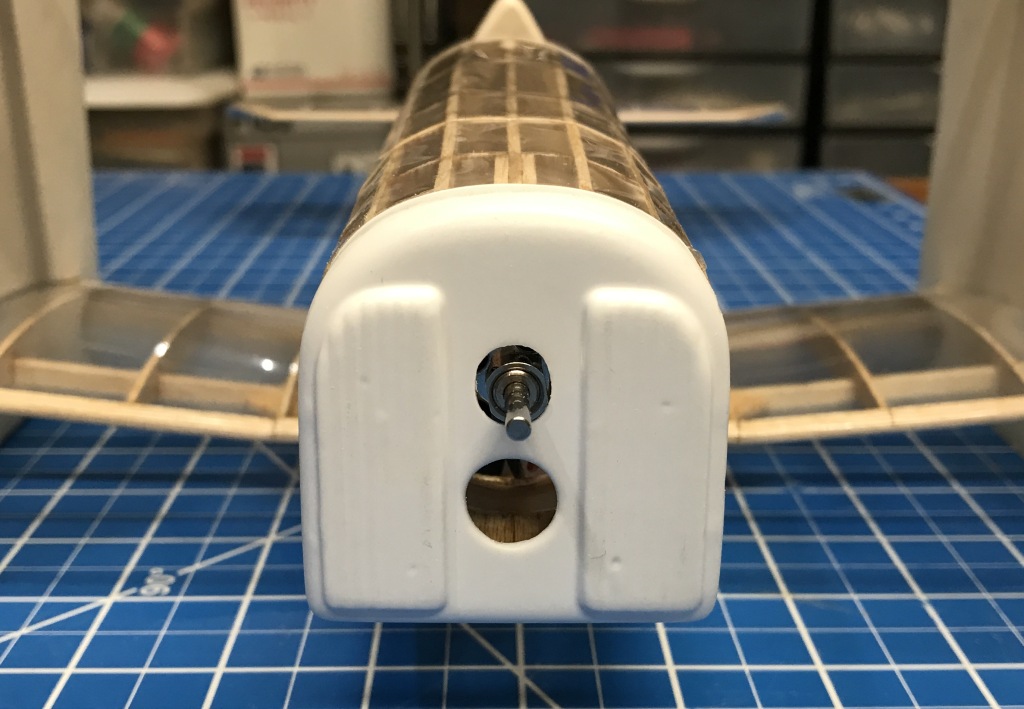 I've been wracking my brain trying to think of a way to hold the top wing in proper alignment to the fuselage and bottom wing while putting in the wing struts. The light bulb finally turned on. The answer was so obvious. Do it the same way Josh does it on the Flite Test biplanes! I made a couple of wing alignment jigs from Adams foam board. Using the full size side view in the plans I transferred the top and bottom rib profile to the foam board. This will work perfectly. 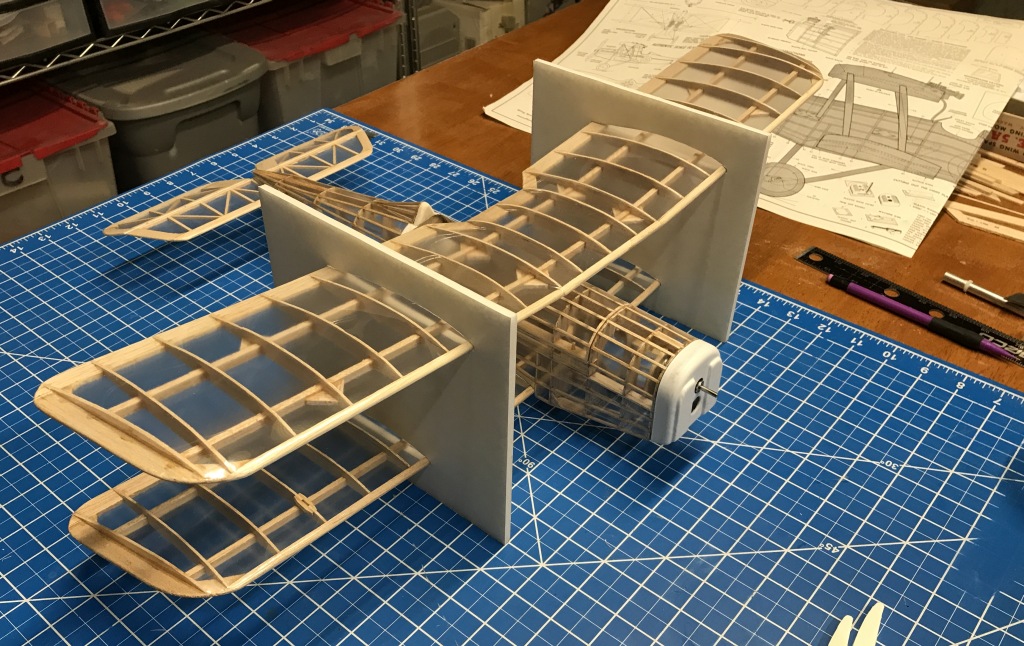 Mentor
#51
That's an excellent jig! I have a couple bi-plane kits in the workshop and need to remember this trick - thanks!

#52
rockyboy said:
That's an excellent jig! I have a couple bi-plane kits in the workshop and need to remember this trick - thanks!
Click to expand...
I'm confident the jig will do the trick. They'll be placed about where you see them to install the cabane struts. Then I'll move them out towards the wingtips and install the wing struts. If I left them where they are in the photo and installed the wing struts the jig would have to be cut apart to remove it.

This evening was spent attaching the tail and connecting the control linkages. 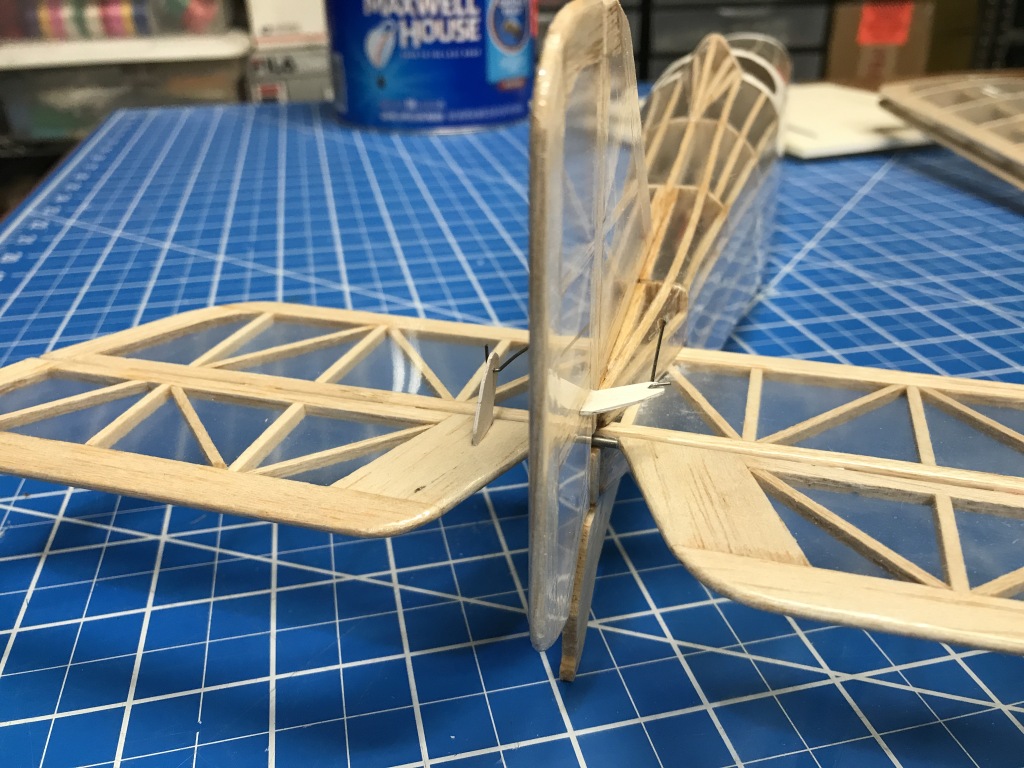 I weighed everything including a 850 mAh 2s battery. 6.8 ounces so far. I don't think it'll come in under the 8.5 ounce goal but it should be close.

#53
Got the lower wing on. I remember the balsa landing gear was very easily broken on the SE5a I built as a boy. I'm trying to beef it up without adding too much weight. I ripped some 3/32" stock from some quarter round molding. I don't know what kind of wood it is but it is straight grained white wood. The grain of the balsa rear strut would be weak where it attached to the front so I made a three piece landing gear strut. The wire that came with the kit is lashed and glued to the new gear struts.

Now I have to figure out how to hold all the pieces aligned while gluing it in place. Here is one of the struts next to the balsa pieces. 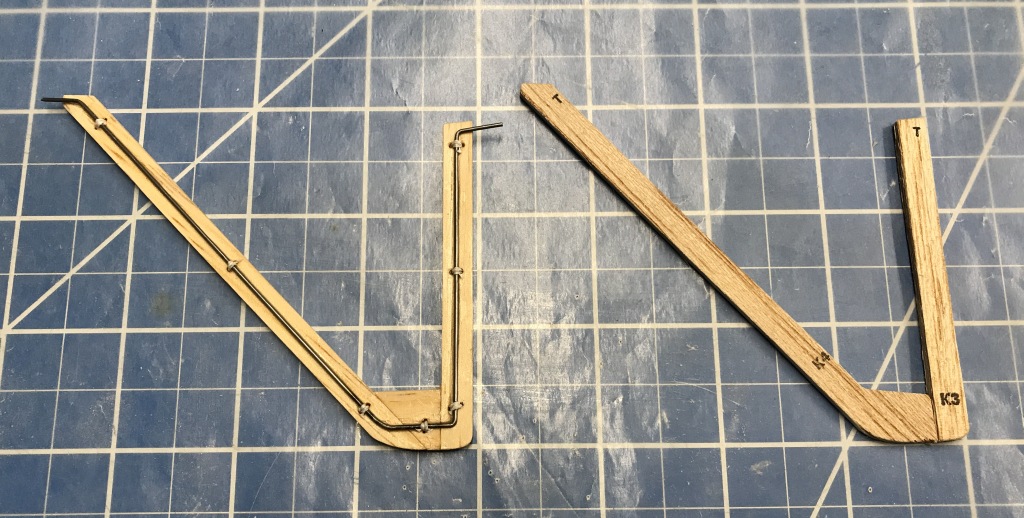 #54
This plane is looking great!

#55
I can't believe I spent most of this week working on one thing: landing gear. It was the trickiest part of the airplane so far. Nothing in these landing gear parts is square. Everything is a funky angle. After hours of filing, sanding and fitting the parts fit well enough together. The only thing that held all the pieces in place while gluing it was gravity, the friction of the axle through the struts and a rubber band. I was worried something would slip before the glue set.

All wire is sewn and then glued to the wood. 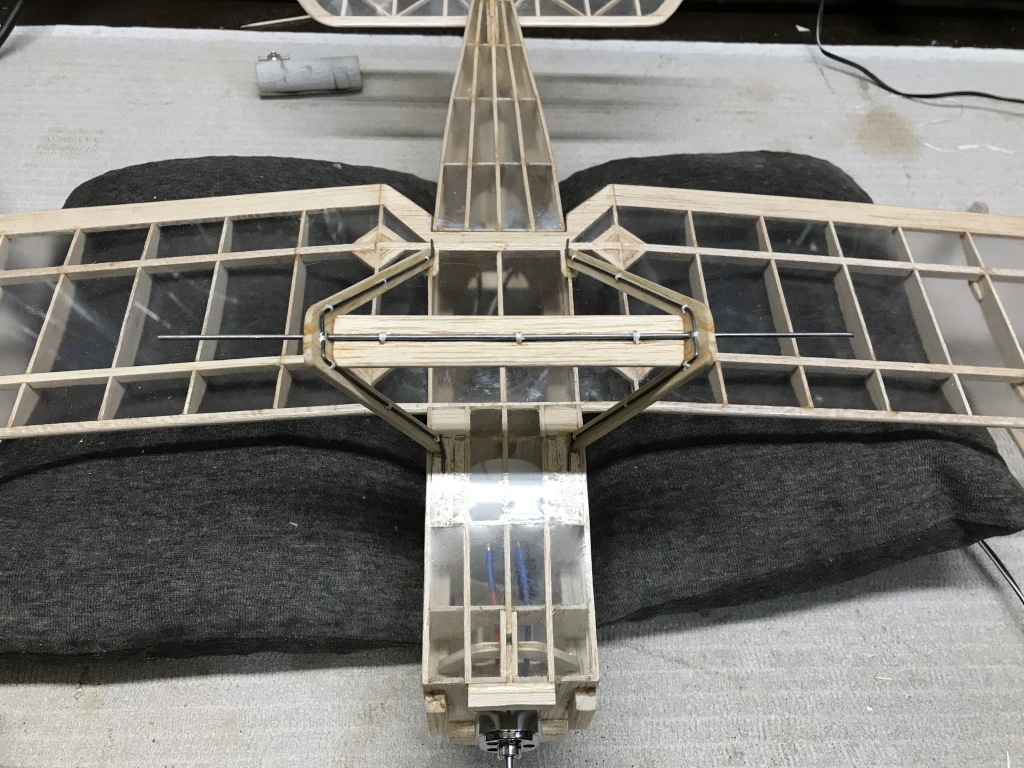 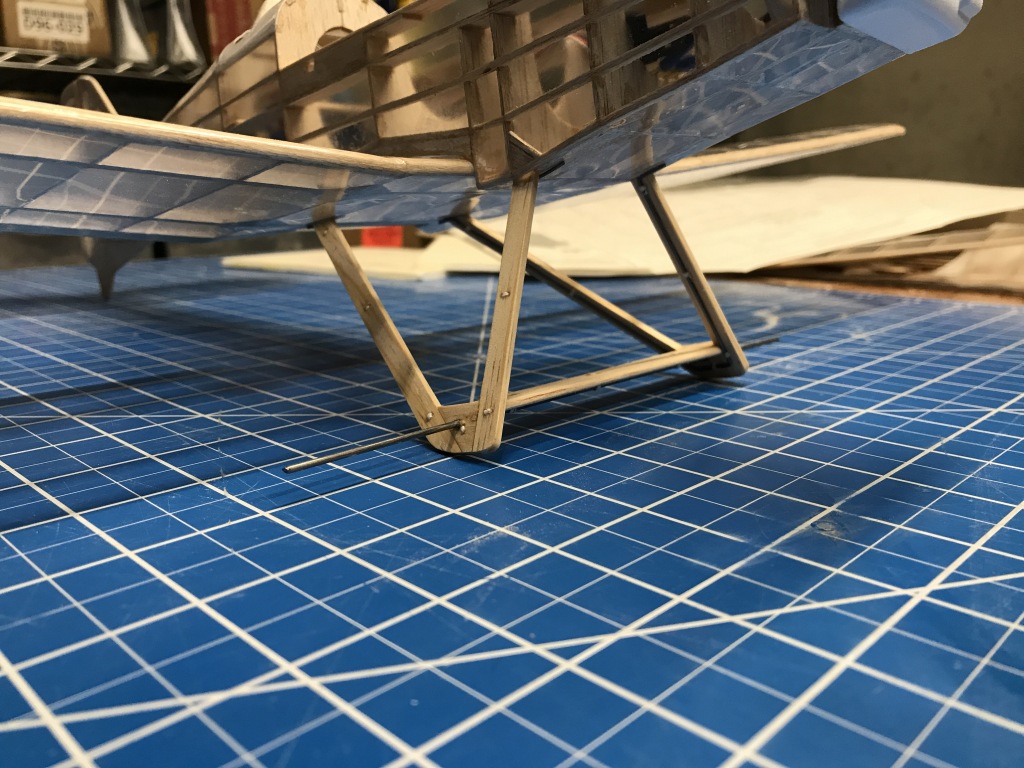 #57
Grifflyer said:
Looks like it came out pretty good!!
Click to expand...
I hope so. The trapezoidal front view of the landing gear is not a strong shape. If a hard landing is on one wheel the gear will collapse. There will have to be guy wires to create stiffer triangular bracing. I have some braided fishing line that doesn't stretch. That should make good bracing wire. Not only will the fishing line be functional, it will add to the scale appearance.

After thinking about it a long time, the wing struts will remain balsa. The struts shouldn't be stronger than the wing framework. I'd rather have the struts break in a botched landing than the wing.

The airplane will be painted with the top wing removed. It will be easier to apply even coats of paint. I'll sand and fit the wing struts first.

Mentor
#58
Looking great! I think the bracing lines will really take it over the top

Mentor
#59
Will you be painting the model? There are a bunch of pretty cool se5.a ace schemes out there to choose from.

#60
AkimboGlueGuns said:
Will you be painting the model?
Click to expand...
Yes. Traditionally the SE5a is a very dark camouflage green. I want it to be brighter looking so I picked up some olive green multi-surface satin acrylic paint at Michael's craft store. The multi-surface satin acrylic says it sticks to most plastics. The water slide decals that came with the kit will be applied if they haven't deteriorated over the years.

Had to get the required bare-bones photos before the paint goes on. Usually that's done before covering but this film is crystal clear. The wing struts won't get glued in until after painting so the wing alignment jigs will have to do. 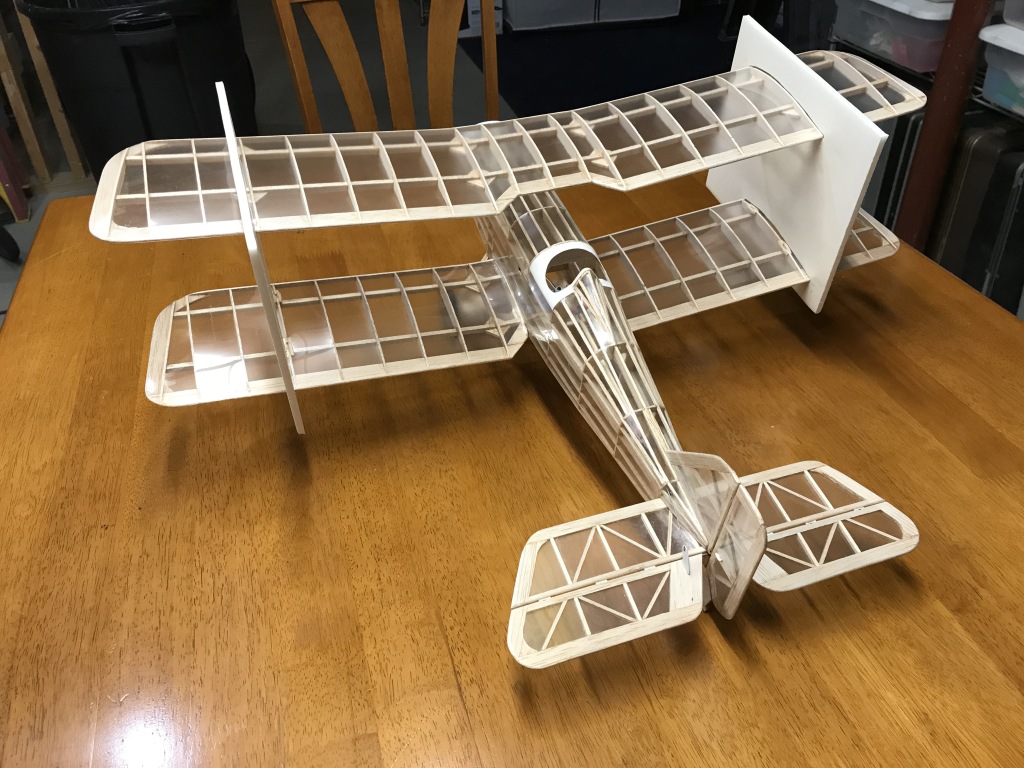 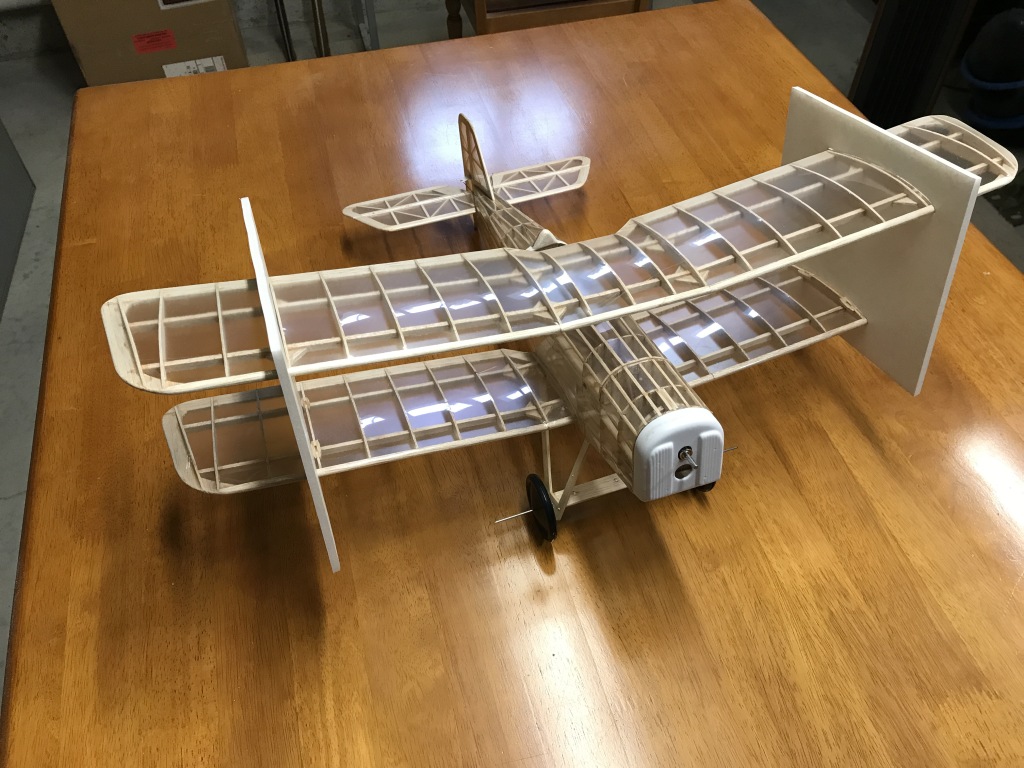 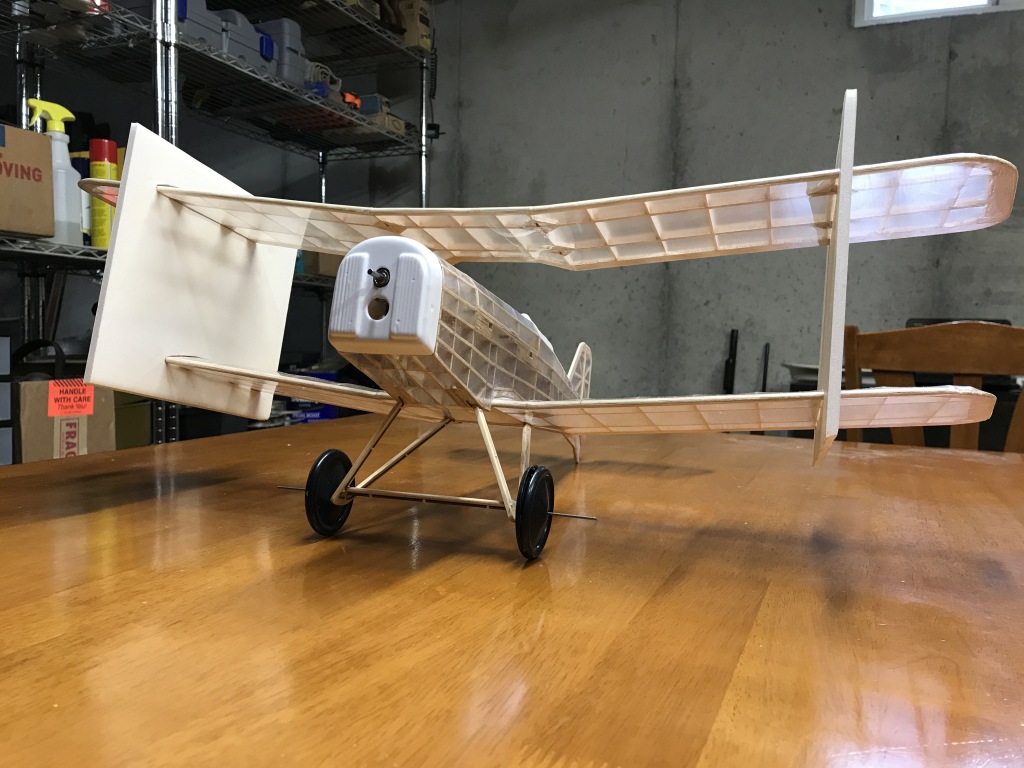 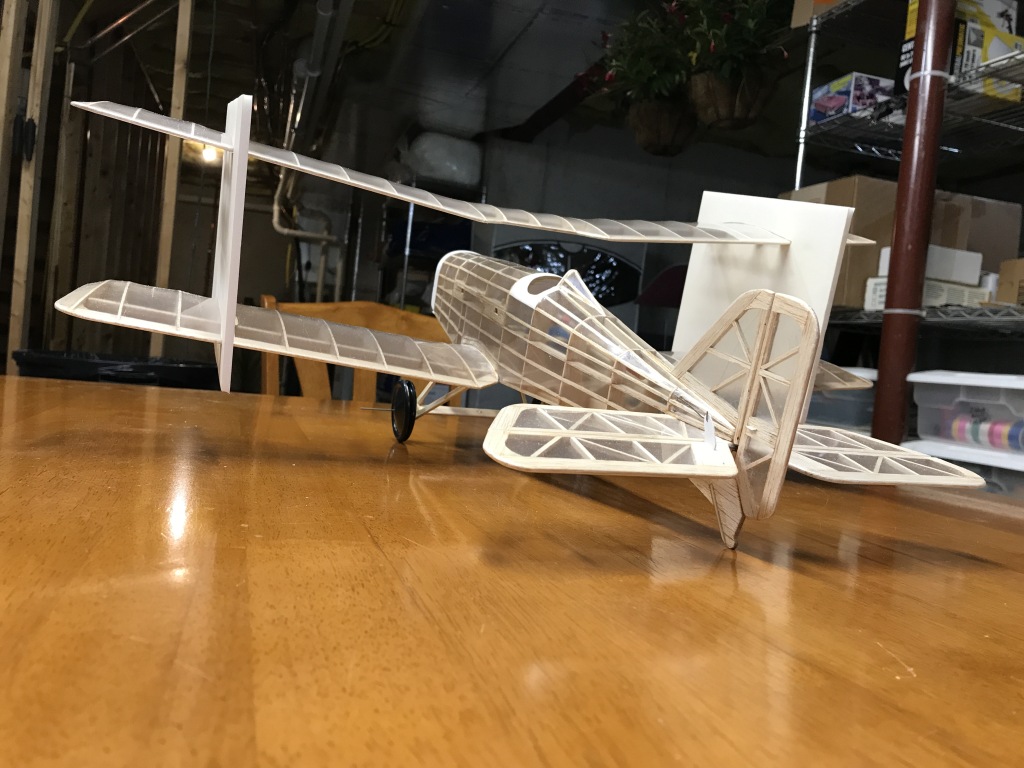