#21
Forget what I just said, because I just added gauges.

#22
I think I did about an inch and a half for the dihedral. Hope that works. I take it that the aileron servo is under the wing/belly of the plane? I cut one the other night and got the fuselage and wing together.

#23
Great looking plane. Happen to have a maiden video of it?

#25
synjin said:
I think I did about an inch and a half for the dihedral. Hope that works. I take it that the aileron servo is under the wing/belly of the plane? I cut one the other night and got the fuselage and wing together.
Click to expand...
Yeah, I think an inch and half will work. Just wondering, were you able to put the mini power pod in it?

#26
I haven't tried putting in the mini power pod yet. I've had to do work work and not hobby work. Keep walking by the 109 wanting to fiddle with it while it regards me reproachfully. Looked on Amazon and got a couple of 1408 3600Kv motors to try out. They should be here next week.

#28
Does the aileron servo go in the fuselage or under?

#29
synjin said:
Does the aileron servo go in the fuselage or under?
Click to expand...
It should just go through and stop at the wing.

#30
jsportser said:
It should just go through and stop at the wing.
Click to expand...
UPDATE. I adjusted some thing to hopefully fit better, put the battery bay on the bottom, and lengthened the wingspan a bit.

#31
Finally done. Going to throw it up in the air tomorrow. Hopefully I'll get pictures...maybe video (found my ancient MiniDV CamCorder...still works). I put a skid on the bottom to protect the aileron servo.

#32
Finally maidened mine tonight. Alaska twilight encouraged me to throw it up for a fly. It’s really fast with the 1408 3600Kv motor and 2S 500maH battery with a 4x4.5x3 prop on full throttle. It was pretty easy to fly at 1/3 throttle, and I even managed to land it. It’s glide isn’t great with no power. Going to give it another go tomorrow.

#33
Wow happy to hear about your successful maiden. Waiting on a video when you get a chance.

#34
Nice! I'm really happy it flew. to tell you the truth i didn't think anybody would build it, Thanks!

#35
No video of the mini Bf-109 yet, but I just got a head harness that works with my phone so I can shoot some not great video. I was out flying the Bf-109 this morning, and was able to burn through two batteries without destroying it on landings. I probably shouldn’t have painted it with Intermediate Blue on the bottom and a color similar to Panzer Gray on the top ( it’s that dark Krylon camo green ). It was hard to see against the slight overcast, even with a yellow nose. But, those were the rattle cans I had on hand. It is pretty darn zippy, although the motor I got is a little temperamental. It can’t seem to decide whether to start spinning when I first throttle up. Once you get the plane flying it’s fun!

#37
I know you’ve moved on from a his plane, but I still like it. This is my new build. I redesigned the tail to make it a little more like the tail on the actual Bf-109. Not sure it’s quite there yet. The elevator may need to go up another 1/2in.

I flew it this evening for the first time, and after getting it trimmed out it flies nicely. I’m going to have to dial down the throws on the ailerons. With them going the length of the wing they have a lot of authority. It was a little twitchy at first, but after I got used to it I could confidently do close to the ground maneuvers. 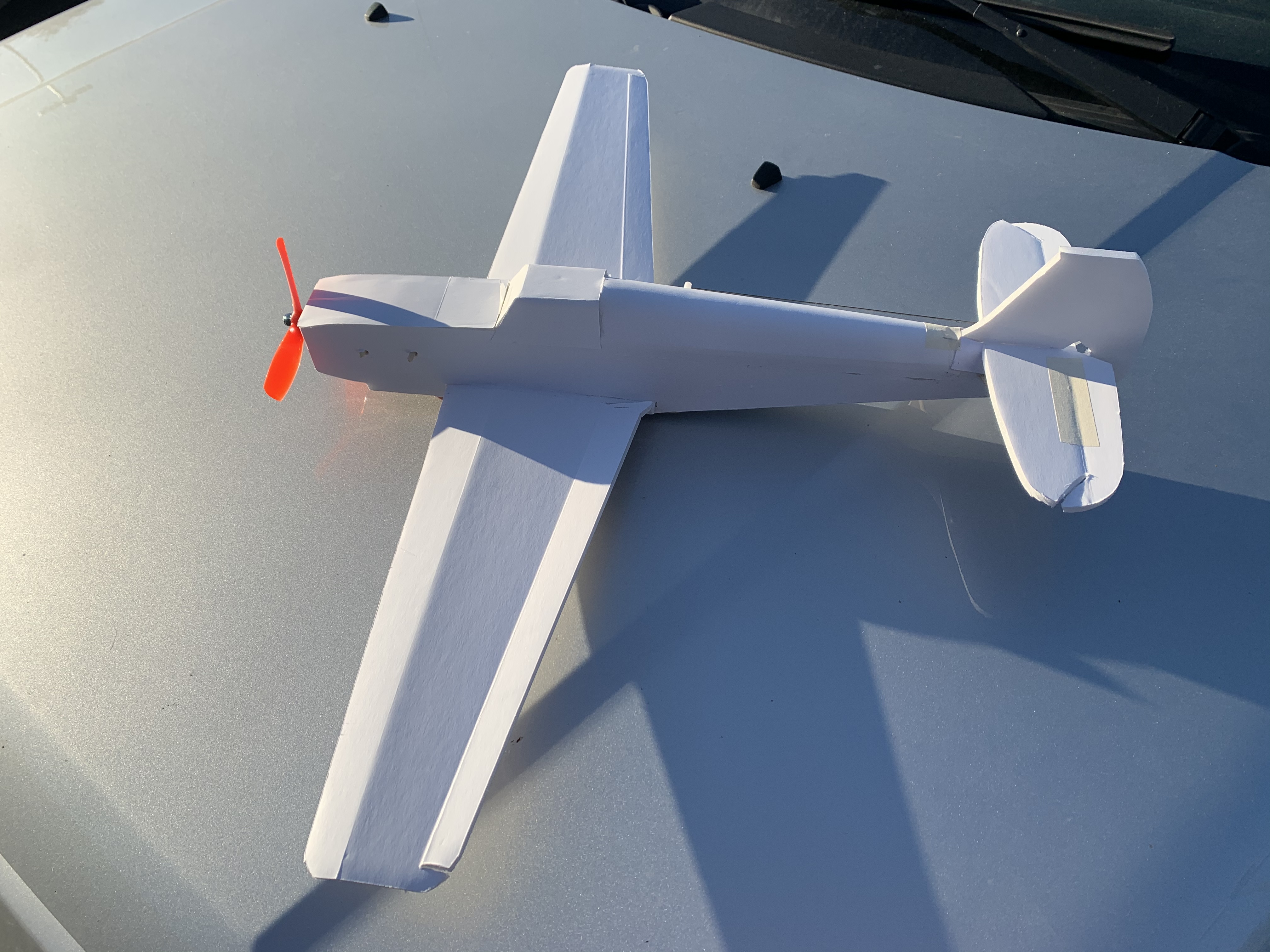 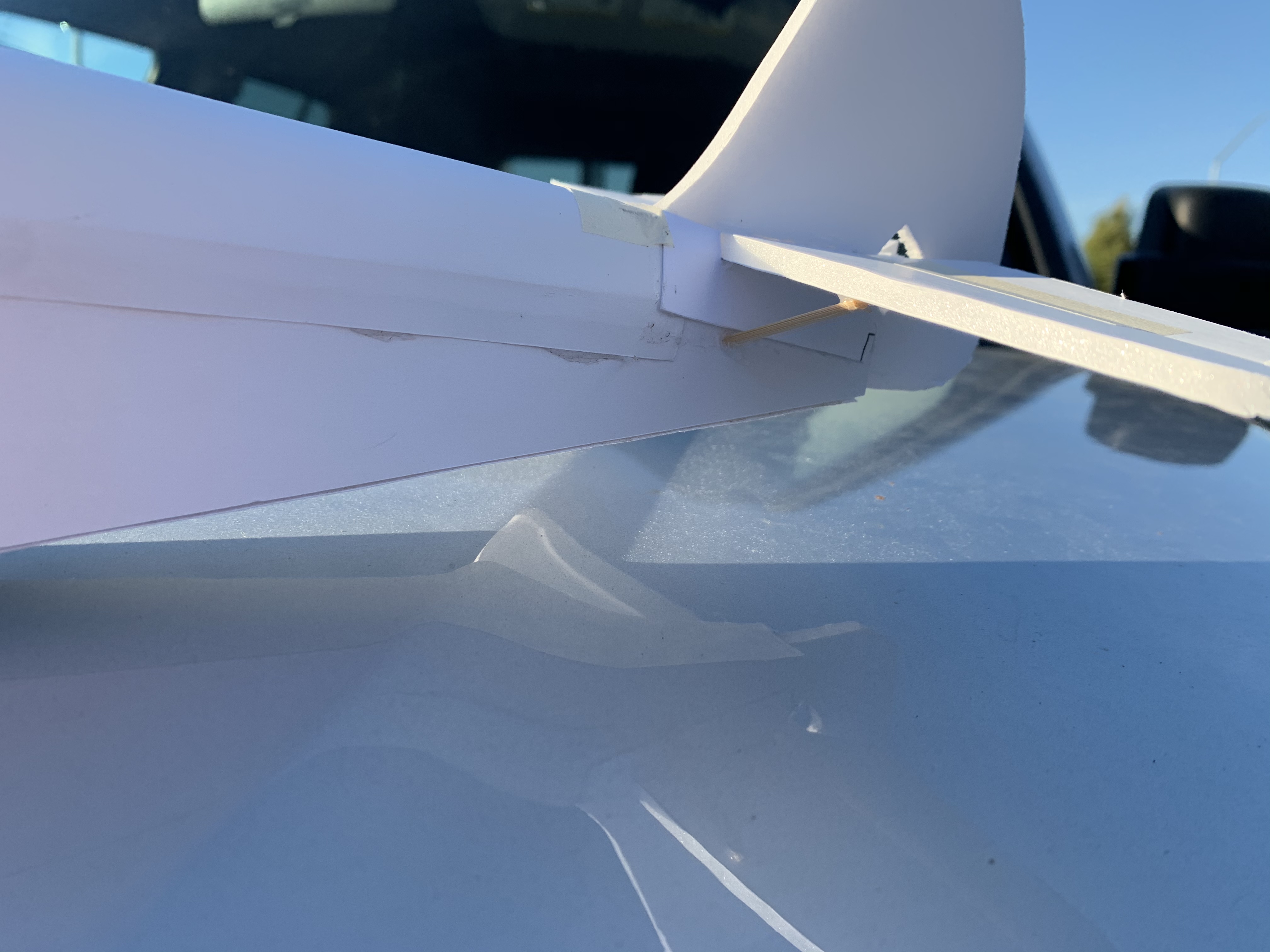